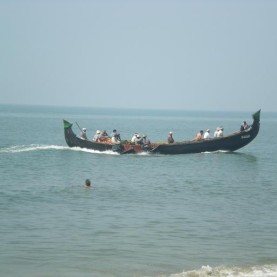 The view from underwater is breathtaking. Corals, oysters, sea weeds, colored fish  and the surrounding blue water is mesmerizing. Touching endangered species such as corals are  not allowed. The best part of the sea walk actually came when we fed pieces of bread to the  fish. As soon as you hold up the bread pieces, fish of different colors gather around you and it does get a bit ticklish but it is definitely a wonderful experience.  After 20 minutes of  “seawalking”, the divers  escorted us back up to the pontoon. When you climb up, one is likely to experience  the pressure factor again . At the end of it, the whole experience leaves you spellbound and the sparkling blue water always tantalizes you to go back underwater.

Our plan was to take a government ferry to Havelock and halt there for two days. For our return journey we planned to take the Makruzz back to Port Blair. We had to wake up at 5 in the morning to catch the ferry which leaves at  6:30 am. The harbour at Port Blair is lively even at these early hours as it caters to to the goods coming in from the mainland, as well as from nearby countries like Thailand. The ferry which we were to travel on, was operated by the Shipping Corporation of India. Our reserved seats in the first class compartment akin to the Indian Railways chair car coaches made our travel comfortable. During the journey to Havelock, you are free to go on deck. Travelers can hear the soothing sound of the waves hitting the craft and enjoy the vast expanse of the ocean. The blue sea, and the green emeralds dotting them, complement each other, and add to the experience. After standing on deck for 15 minutes, we decided to get a quick nap. When we woke up, the ferry was docking at the Havelock Jetty. After getting off the ship, we were picked up by a taxi our friends had arranged.  We were dropped at our hotel, a government enterprise called the “Dolphin Hotel”. There are various grades of rooms available and it is important to reserve the rooms early.You may reserve the rooms through online payment on the website. Make sure to get a sea facing cottage. The drawback about Dolphin Hotel was  that though it was set in a nice sea-facing location, it did not have a beach.There are a multitude of options to stay at in at Havelock, which suit all budgets.

We passed the first town enroute – Ganderbal, within an hour. It was after Ganderbal that the real beauty of the drive commenced. After Ganderbal, the snow-capped Himalayas greeted us bang on. Every turn gave us panoramic new scenes, which always seemed to better than the previous one. Complimented by the untouched beauty of the Sindh River, the landscape was picture perfect.

On the final day we visited the Tunga Bhadra dam in Hospet which is a multi-purpose dam for irrigation and electricity generation. The dam which was completed in 1953 is a source of prosperity for farmers in Koppal and Raichur Districts.