The Commonwealth holidays was the perfect alibi for a perfect holiday in a perfect place. The cool October breeze, sunshine and laziness made us decide to travel to the Tibetan hamlet of Mcleodganj in Upper Dharamsala. Mcleodganj rose to fame when the Tibetan Leader, HH the 14th Dalai Lama moved here from his home in Tibet. 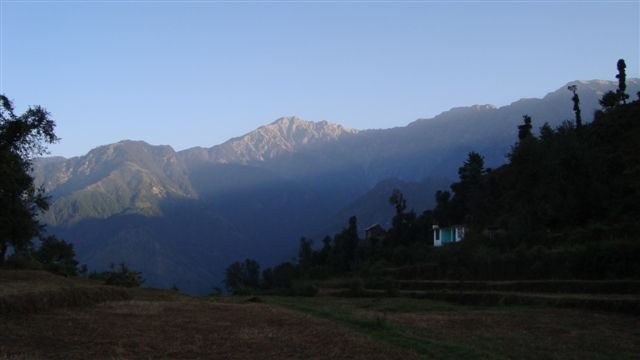 We left Delhi at 0600 hrs on the 7th of October in our Swift LDi. There was an early morning chill and the roads were quite deserted. This gave us the opportunity to get out of Delhi really quickly. NH-1 outside Delhi up to Panipat was smooth and without any traffic and we clocked an average speed of 90-100 KM/hour. But alas, the construction on the highway from Karnal slowed us down like anything. Still we reached Ambala Cantonment  by 0930 hours. After Ambala we continued on the NH1 and took a shortcut to Kharar via Banur. This road is a state highway  and one has to take a  right turn just before the toll booth about 10 KMs from Ambala to enter this road. The shortcut helped us save a lot of time and by about 1330 hour we managed to reach Una. Locals at Una suggested the Ekta Dhaba located next to the Bus Stand as the safest bet for a hot lunch. To our surprise, the food was completely out of the world. The food was cooked in coal and not in gas which added to the flavour. The road from Una to Amb was really bad and it took us nearly an hour  to complete. Beyond Amb the road improved and we passed Dera Gopipur, Kangra and Dharamshala quickly. 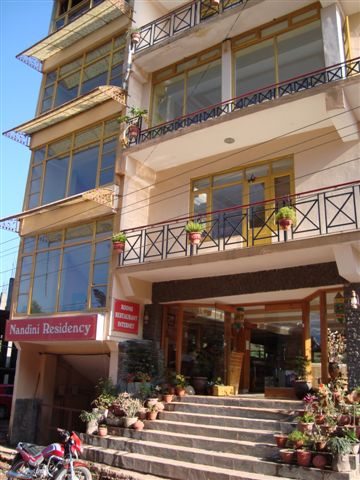 At last we reached the tiny village of Naddi (3 kms from McLeod Ganj) at about 1645 hrs and checked into the Nandini Residency covering about 525 KMs. The sky was heavily overcast but after a downpour, everything cleared up and the weather became sunny. The clearing up of the sky gave us an opportunity to view the enchanting peaks of the Dhauladhar Mountains at a really close range. The majesty of the mountains was awe inspiring. We ended the day by touring the bubbly market of Mcleodganj. 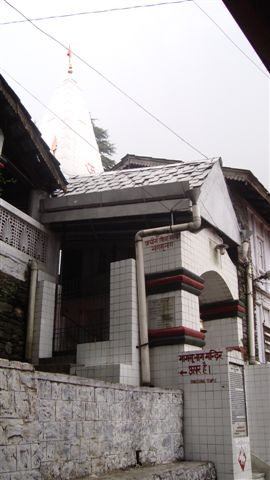 We started the day by visiting the Tsuglugkhang Monastery of HH the Dalai Lama, where he was giving a sermon. Unfortunately for us, HH was delivering the speech in his native Tibetan, a result of which we could not make head or tail of what HH was saying. Next we explored the market around the temple which was abuzz with activity. We tried out some food items such as vegetarian momo and pakthai. 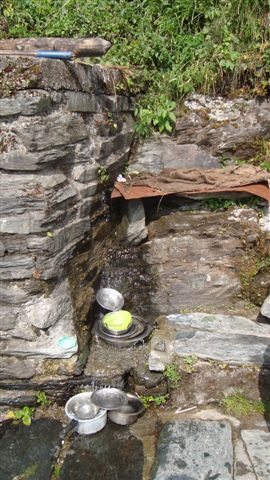 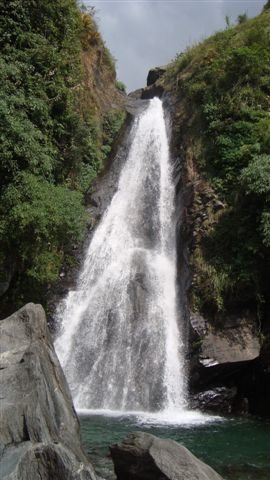 Then we went to the ancient temple of Bhagsunag or Bhagsu for short. It is located 3kms from Mcleodganj. A 1 km walk from the temple leads you to the majestic Bhagsu Waterfall. We enjoyed ourselves in the thundering roar of the water, which was crystal clear and cold. The waterfall and its water refreshed us for the day ahead. 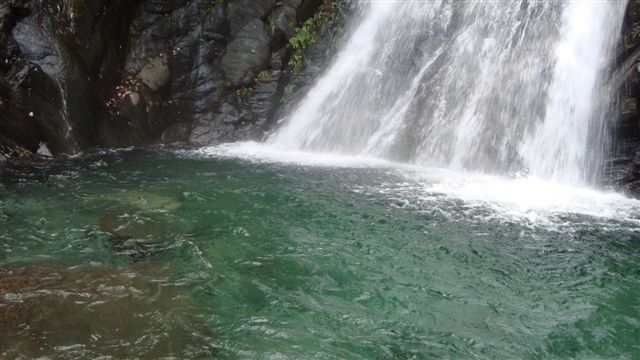 We visited the ghostly Church of St John in the wilderness .It was right beside a century old cemetery. This actually gave us the creeps .The church on the other hand was very beautiful. It was surrounded by evergreen pines and it gave us the feeling that we were in England. Lord Elgin the viceroy of India who passed away in Mcleodganj is buried here and there is a memorial for him. 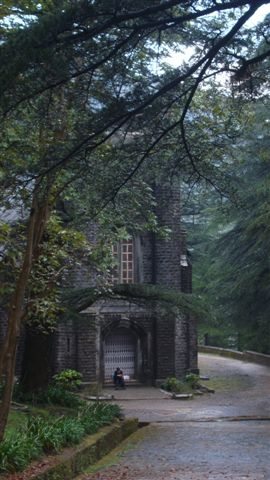 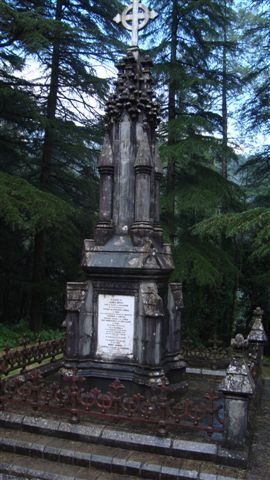 We then had hot and sumptuous Italian food at Café Italiano in Mcleodganj. 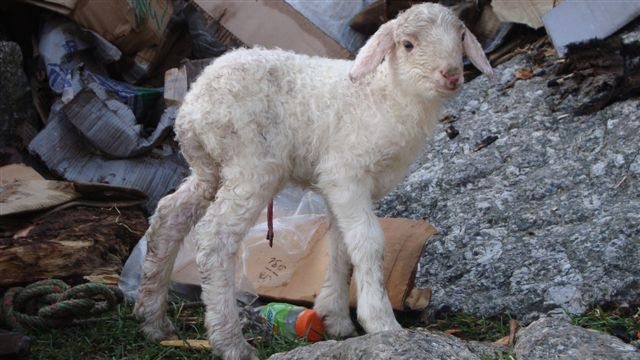 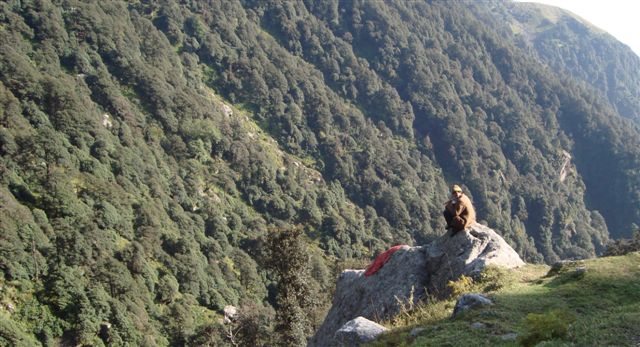 The plan ahead for us was to trek to the picturesque hillock of Triund, which lies about 10 km away from Naddi. We hired a guide from the travel agency known as Summit Travels. The guide, Ashok, was a very warm and informative person. The “expedition” started at around 0745 hours. We reached the Gallu Temple at 0915 hrs and from there it took us  3.30 hours to Triund. The effort we made to climb was aptly paid off with the scenic splendour of the route. Our bodies were totally worn out due to the tough nature of the trek when we reached Triund. 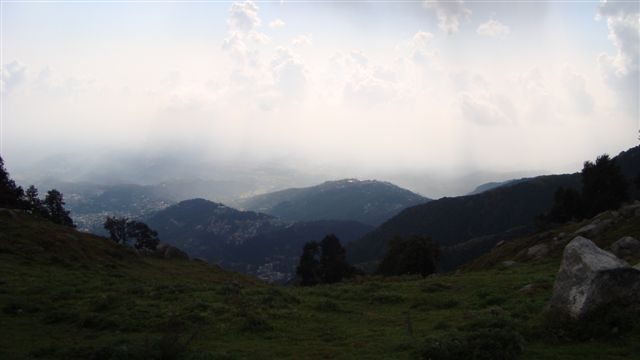 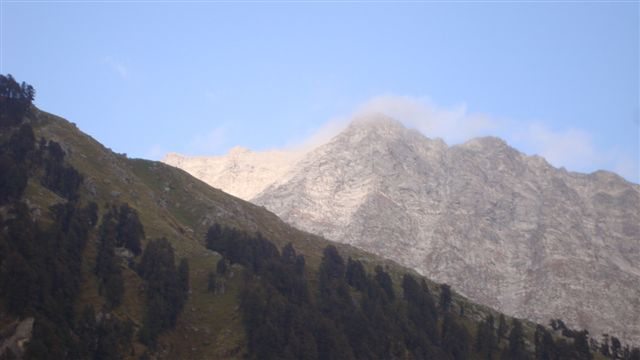 I was particularly shocked at the thought of the native villagers doing the climb 2-3 times a day. The view at Triund was fogged up with heavy rain clouds. But the rain soon after cleared it all up and the view from the top was awesome. It might have been the closest you can get to the Dhauladhar range. 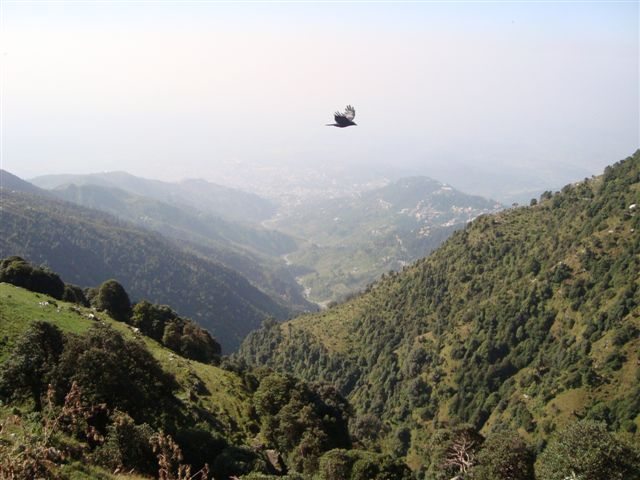 However, we were not to know of what was to come. After witnessing the mountains and the valley, we started the descent from Triund at 1500 hrs. We maintained a steady progress. Near one of the tea shops, we saw a spectacular scene of a shepherd playing the flute on a rock. The rain gods were not in agreement with our trek though. After the first tea shop, the clouds advanced over the hills. When we finally reached the penultimate tea shop, the clouds split and there was a torrent of rainfall. It was getting dark too, so we decided to move on .The rain got even worse. It was complemented with huge hailstones and high speed winds. We kept moving but our hands and legs were freezing, literally. The storm and the journey seemed endless. At about 1830 hours, we were greeted with the sight of civilization at Gallu. Luckily for us there was a vehicle available for hire at Gallu and we  managed to reach our hotel in Naddi at 1900 hours. The trek through tiring is worth the while for the magnificent view en route and on top of Naddi. The trek was the best part of the trip for the sheer sense of exhilaration it evoked

We started our return journey to Delhi. On the way we explored Dharamshala market, saw the cricket stadium and visited the Norbulinka Institute and Monastry which gives a birds eye view of Tibetan Culture. 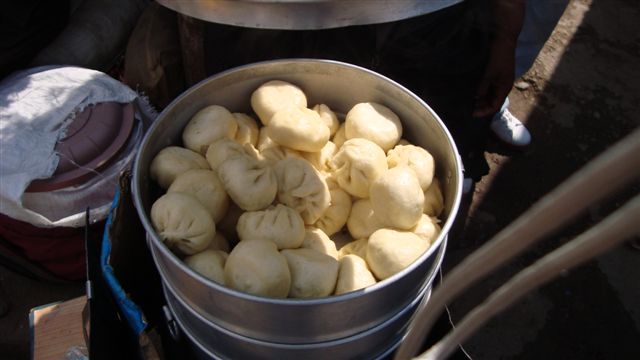 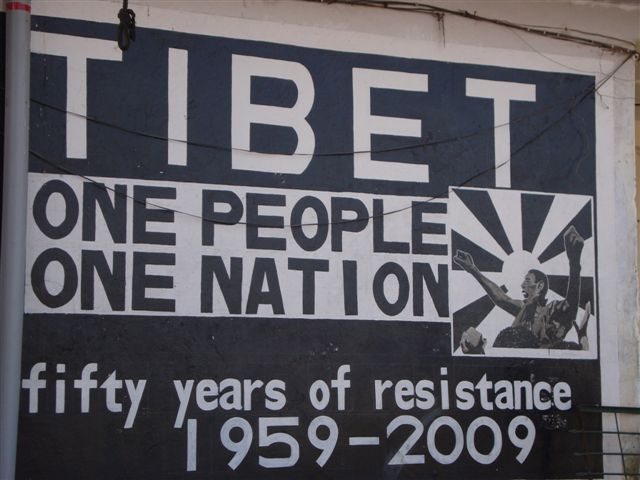 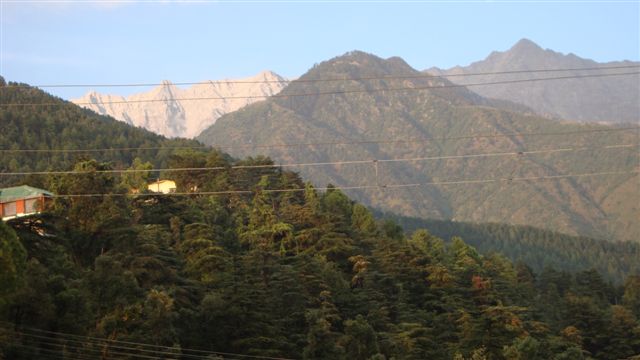 Then instead of taking the same route back via Amb and Una we took the National Highway to Pathankot. Just after Nurpur at  we took a left turn on to a District Road which took us to the magnificent Pong Dam. The Pong Dam is the largest earthen dam in the world and the reservoir is so huge that one cannot see the other end. The journey from Dharamshala to Pong took us about 3 hours. After Pong we reached Dasuya and then headed for Chandigarh via Hoshiarpur and Garhshankar. We halted in the UT Guest House in Chandigarh.

We started from Chandigarh at around 12 noon and had a smooth trip to Delhi. Enroute we had some hot Punjabi food near Sonepat. Finally we reached Delhi at around 17.30 hours bringing the curtains down on a truly adventurous and fulfilling trip.

An exhilarating Trip to Mcleod Ganj and Naddi was last modified: June 30th, 2022 by Sishir Mohammed

The village head, Ram Dayal requested us to help with the health-care, which was non-existent in the village. The nearest place to get even the basic medicines was Talha, which was twenty five kms away.