Waking up to the beauty of Patnitop was an enchanting experience for all of us. The Deodars and Pines all around complimented the awesome view of mountains. It was a scene that was completely out of the world. Awestruck by the beauty, we roamed around the meadow, taking photographs before finally having breakfast, which turned out to be a snack known locally as “Kalladi“.  Kalladi, a variant of cottage cheese is sandwiched between two slices of bread, fried and served hot as the first meal of the day. Kalladi tasted wonderful in the cold morning. After finishing breakfast, we bid adieu to Patnitop at around 10 Am as we were eager to reach the Vale of Kashmir.

As all of us were die hard foodies and we could not resist the call of the famed Rajma-Rice at Peerah. Peerah is around 45 minutes from Patnitop and as you approach it, Anardana (Pomegranate) orchards are seen lining  NH 1A. Reaching Peerah, we halted at the Mansaram Dhaba to taste the famous Rajma-Rice served along with a tangy Anardana  Chutney. The dish, served with dollops of ghee is truly  “finger licking good”. After the delicious meal, we continued with our drive towards Srinagar. 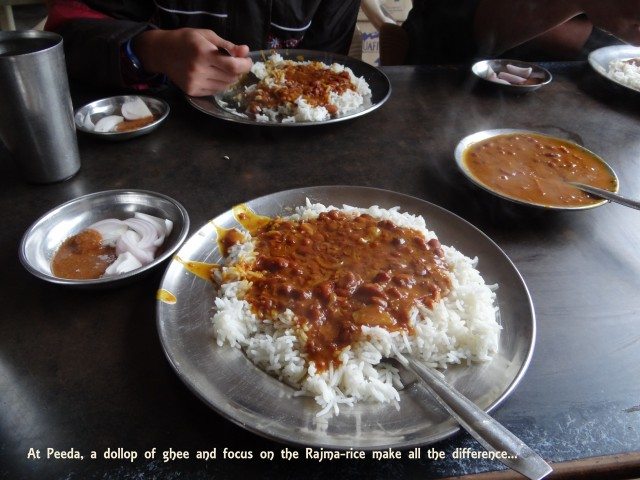 The highway to Srinagar, NH 1A , being the  only connection to the Kashmir Valley was quite busy. The highway is extremely vital for India and passes through the towns of Peerah, Ramsu, Ramban and Banihal before passing through the Jawahar Tunnel. The scenery until the tunnel, like Patnitop, was beautiful although the rain slightly dampened our spirits. One also becomes aware of the CRPF and Army convoys transporting troops to and from the valley that quite often  cause monstrous traffic jams. We too encountered a few traffic jams on the way. Nevertheless, we finally managed to reach the Jawahar Tunnel after the town of Banihal. The tunnel is considered to be an engineering marvel and burrows through the mighty Pir Panjal Range. It is a little more than 2 km long and is the only entry to Kashmir. An alternate route called the Mughal Highway is now being built through Rajouri and Poonch. 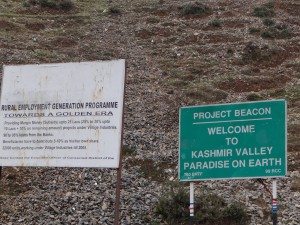 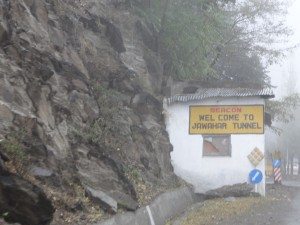 Excitement levels peaked as we were entering the tunnel and we  attempted to click a few photos of the tunnel before actually entering it. Midway through the tunnel, we were taken aback when the traffic suddenly stopped. Thinking of it to be some kind of routine check, we waited for while. However, after around 15 minutes of waiting we discovered that a lorry with an empty fuel tank was the reason for the jam. The tunnel was so well designed and constructed that the spaces within could accommodate  malfunctioning vehicles.  With support from other travelers who were also stuck in the tunnel, we managed to slowly move  the lorry into one such space. Heaving a sigh of relief we gradually descended from the tunnel into the Kashmir Valley. A sign put up by the BRO welcomes you into “Paradise”. However for us, the first impression literally gave us the chills. Regardless of the fact that it was cold, all of us were thrilled to be in Kashmir, a land which has undergone tough times but still retained its identity, as we would discover, due to the very warm people and of course, its breathtaking beauty. 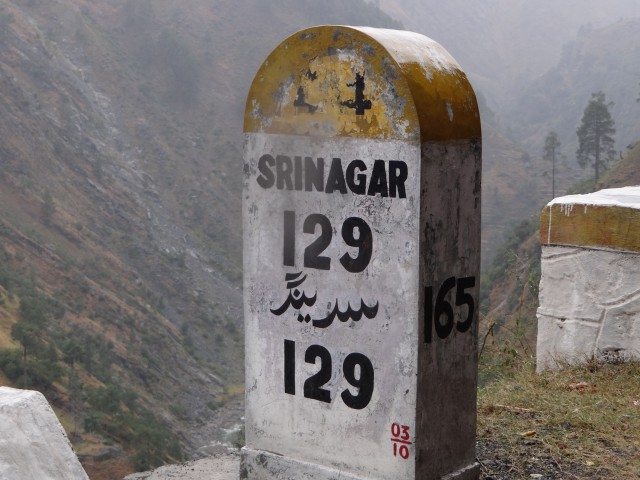 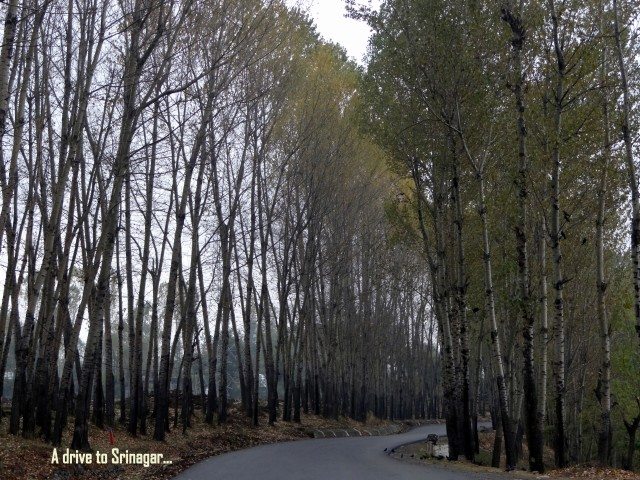 A section of the highway, lined with tall trees

Qazigund, the first town encountered by motorists while  entering the valley, is a little less than 70 km from Srinagar. After Qazigund, the road to Srinagar is well maintained  and we managed to reach there after passing through the towns of Anantnag, Bijbehara, Awantipora and Pampore. Pampore is well known all over the world for saffron plantations which dot both sides of NH 1A as you drive through it.
Our plan was to halt at a  guesthouse in Srinagar. Thus, after navigating through the city, we managed to reach our destination by 3 pm in the evening. Thankfully for us, the sky was beginning to clear but all of us were too tired to try the Shikara ride  and so we decide to just drive around the city. The first and closest destination was none other than the Dal Lake. When we first saw it we were horrified to see rows and rows of house boats. All images of the lake being pristine were shattered. But soon after, the lake widened to give us a scene that we could only see in books and movies. Truly, it was a very beautiful sight, with mountains in the background and shikaras slowly and peacefully gliding through the water. The serenity of Dal Lake prompted all of us into silence so as to enjoy the beauty. 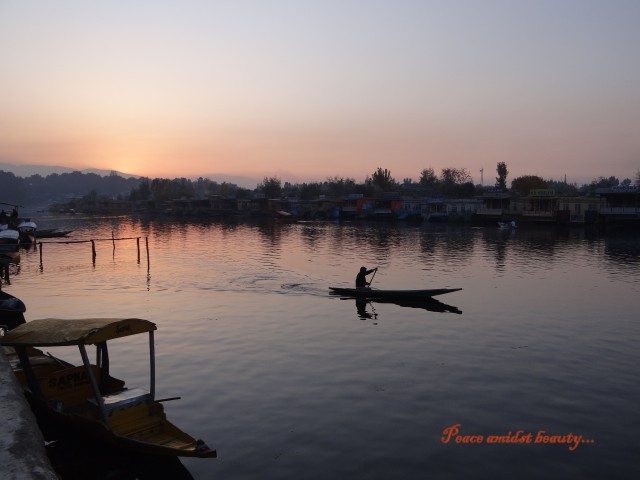 The next place in line was Lal Chowk. It is supposed to be the most sensitive area in Srinagar but at the same time, is the hub of business activity. Unfortunately for us, it was a Sunday, so all shops were closed. The Clock Tower which is the landmark of Lal Chowk was virtually deserted. We were going back to the guesthouse when all of a sudden we sighted the famous “Food Street”. It was situated right in the centre of Lal Chowk. We had heard a lot about it, so we decided to give it a try. Only one shop was open, but the shop-owner  welcomed us warmly and invited us to his stall. Smelling the aroma of the Rista, we could not turn back and ended up feasting on two bowls of Rista each. After the meal, the owner thanked us for eating at his shop and talked to us about the violent strife in the region, which had finally come to an end. His warmth and friendliness made us think about how good hearted the Kashmiri people were. With a  promise of  exciting days ahead for us at Kashmir, we went  to bed early.

On the second day in Srinagar, we had the gardens of Nishat, Shalimar and Chashmashahi, and the grand mosque of Hazratbal on our itinerary. After a quick breakfast, we left for the first garden- Chashmashahi

The Chashmashahi garden is one of the three main Mughal Gardens in Kashmir. The garden consist of three terraces leading upto a spring, which gives it its name (Chashmashahi means “Royal Spring”). It is at an idyllic location, with the Zaberwan mountains in the background. We even drank the water of the spring, which  tasted  fresh and cool. 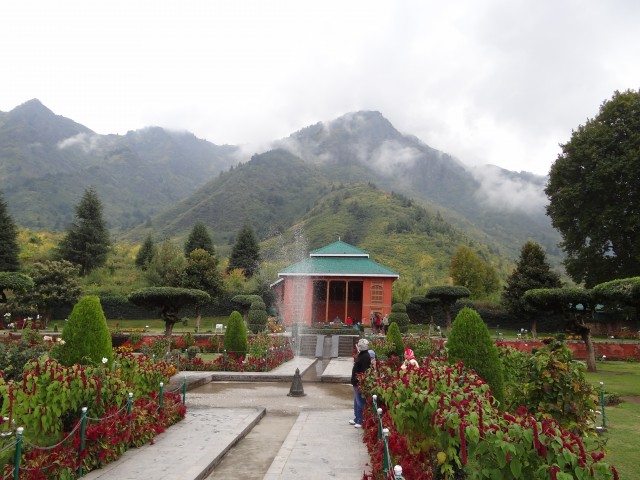 The famed garden of Chashma Shahi

Nishat Bagh is the second largest Mughal Garden, after Shalimar Bagh. The literal translation of  “Nishat Bagh” is “The Garden of Bliss”. It is made up of twelve terraces facing the picturesque Dal Lake. Although some amount of climbing is involved, Nishat Bagh is very beautiful, with its Chinar trees and flowers.

Shalimar Bagh is the largest out of the three Mughal Gardens. It was laid out by Jehangir for his wife, Nur Jahan. It is probably the most beautiful of the other gardens in Srinagar. The path running through the garden is lined with russet-red Chinars and flowers like roses and cockscomb. The channel of water flows underneath specially made niches.

The Hazratbal Mosque is one of the most iconic monuments in Srinagar. Set, against the amazing background of  the snow capped Pir Panjal range and the Dal Lake, the shrine houses a relic of Prophet Mohammed. The relic is displayed to the public on special occasions. the mosque is situated in the older part of Srinagar. After offering our prayers there, we decided to go to Lal Chowk and eat our lunch.

One of the most iconic monuments in Srinagar - Hazratbal Mosque

Enroute to Lal Chowk, we sighted the famous Mir Bakery and of course, immediately stepped in to have a look. The bakery has all kinds of Kashmiri breads such as  Baqarkhani, and other items. The coconut biscuit ( a surprise) turned out to be tasty too.

The Mughal Darbar restaurant, situated on Residency Road was recommended to us by many people for Kashmiri food. Eager to have a taste of the traditional Kashmiri Wazwan, we decided to eat our lunch there. The Mughal Darbar turned out to be a nice, cozy place with excellent dishes like Rista, Goshtaba, Kashmiri Pulao and so on. As in the other places we had been to, the service at the restaurant was also very good. After eating lunch, we ventured out to do some shopping at Lal Chowk. Kashmir, with its dry fruits, saffron, carpets and  handlooms is a well known shopping destination. Woolens are also of very good quality in Srinagar. 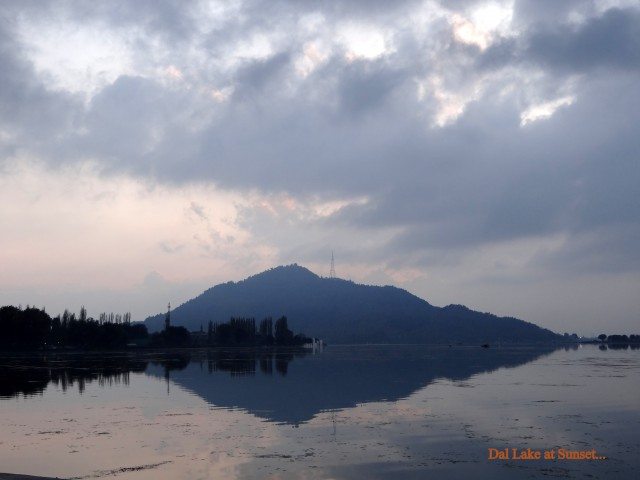 The calm Dal Lake at Sunset

An evening Shikara ride on the Dal was the last item on our itinerary that day. As you ride in the Shikara on the Dal,  you  encounter a whole township of houseboats,  chalte firthe bazaars, tea shops and even  chalthe firthe zameen. These floating pieces of land are used by the landowners to do some kitchen gardening and are bound to the floor of the lake through a long pole. The boatman informed us that often these floating pieces of land are stolen in the stealth of the night and the police are left with no alternative but to register a case of ‘stolen land’! 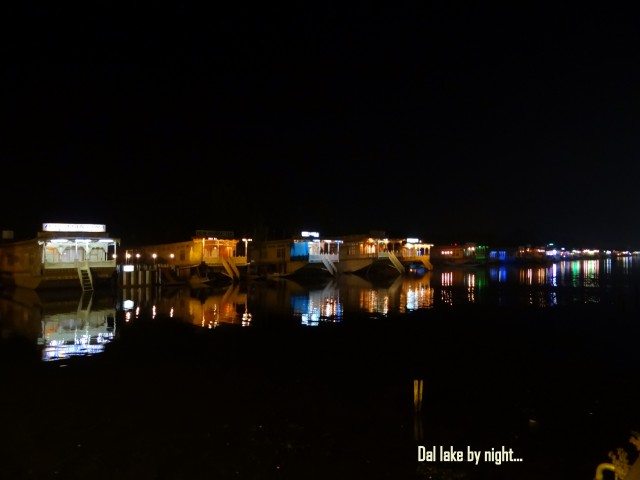 The Houseboats on the lake, at night

The Shikara ride put the curtains down on a memorable day in Srinagar. Our plan for the next day was to drive uptil Sonamarg and spend the day next to the famed Thajiwas Glacier.

Kababs and Lucknow are inseparable in such a way like Sachin Tendulkar with bowler’s humiliation, Suresh Kalmadi with corruption and Aamir Khan with intervention…