Our whole family was around for the Diwali Holidays, a period of about 5 days. We wanted to escape from the fumes of crackers in Diwali, so we decided to travel to Dhanaulti and Tehri via Mussorie. The hills would be a perfect retreat from urban Delhi. We planned to leave on the 4th and return on 7th of November. So please read the travelogue, and be sure to comment. I hope it reaches the standard of Ghumakkar. 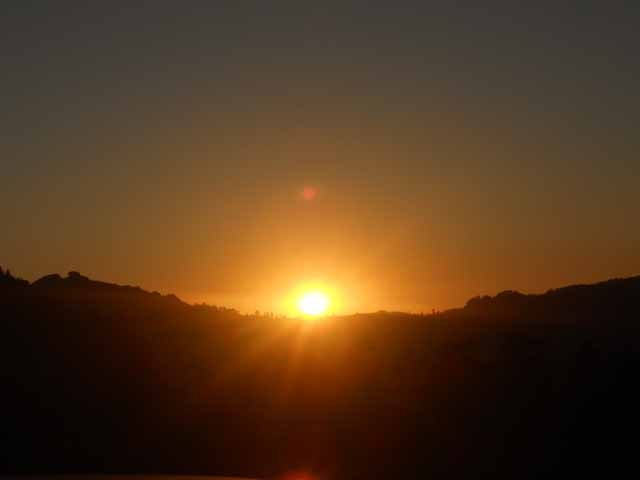 We wanted an early start , so we started at 0600 hrs, so as to avoid the heavy traffic in Ghaziabad, Meerut, Modinagar, and Dehradun. We succeeded in bypassing all of these towns except Dehradun without much of an interruption. However in Dehradun, we encountered extremely heavy traffic. It took us more than an hour and a half to finally get away from the capital of Uttarakhand. We were tempted to eat in decent looking hotels along the way, but we resisted the desire. We finally reached Mussorie at 1600 hrs in the evening and we were heavily exhausted. We did manage to have good Tibetan food at the Hotel Kalsang, located on the mall road. 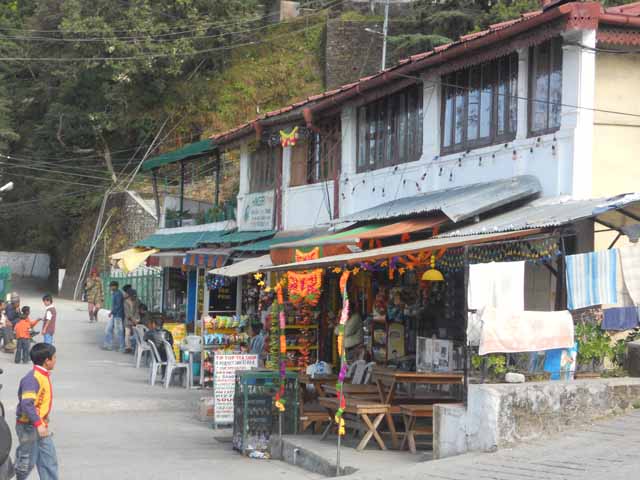 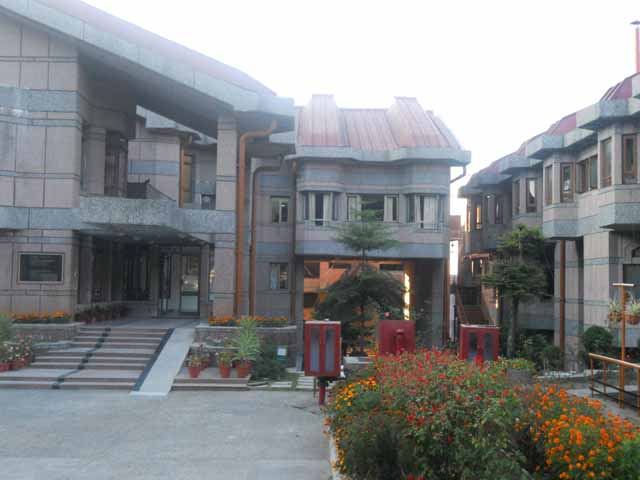 Following that we roamed around the Mall and bought a few woolens which are cheap and abundant here. We even visited the LBS Academy of Administration, where civil servants are trained. Our home for the night, the DRDO Guesthouse, was situated in Landour, 4 kms from Mussorie. Landour is famous as it is where the houses of Ruskin Bond, Victor Banerjee and Tom Alter are located.

We woke up early in the morning in the hope of seeing the snow clad Himalayas. We were not to be disappointed. The peaks of Nilkanth and Chaukhamba were clearly visible. Soon after, we went for a walk through Landour till Lal Tibba. From Lal Tibba, the Dehradun Valley and Mussorie are clearly visible. We then halted at Char Dukan, a series of four shops which were established during the British rule about 100 years back. It is a rendezvous point for Ruskin Bond, Victor Banerjee and Tom Alter. Our plan was to then go to Dhanaulti, a picturesque town 20 kms from Landour. The road to Dhanaulti was in excellent condition. It was a very scenic route with the rolling blue hills on the right and the snow-capped peaks to the left. We managed to reach Dhanaulti by 2 in the afternoon. 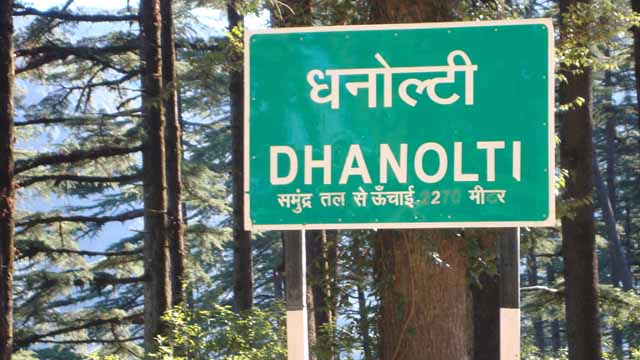 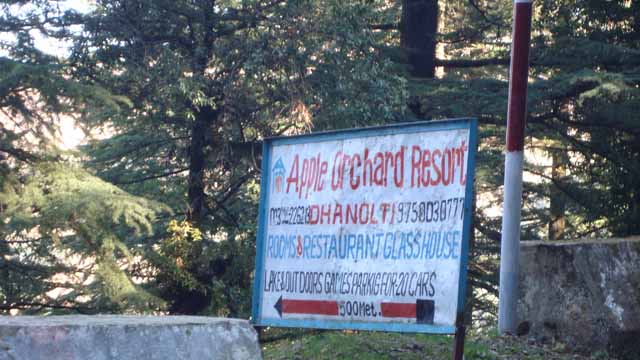 Dhanaulti is situated amongst deodar forests and is 2250 metres above sea level. We planned to stay in the Apple Orchard resort, 4 kms from Dhanaulti. It was a decent place with good rooms. The service, however was not up to the mark. We had warm, homely food at the GMVN Guesthouse, after which we visited the Potato and Herb Farm uphill. Unfortunately, it was not the potato season so we could not see any crop. 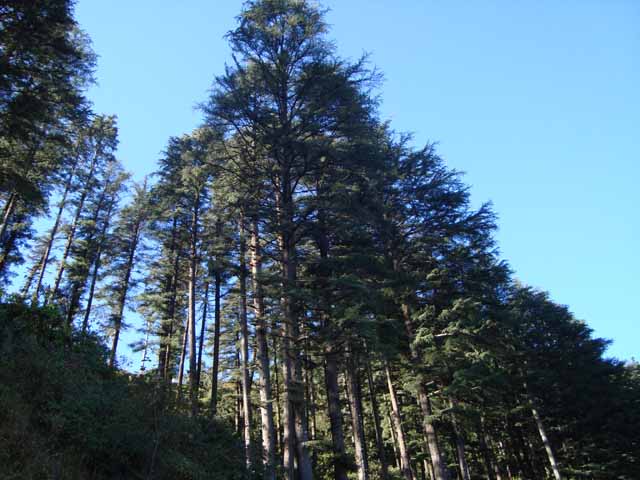 We found out that there was a 1 km trek to a peak called Tapovan in Dhanaulti. We started the trek at 4 and managed to reach the top of Tapovan in 55 minutes. Tapovan is a grassy meadow at a height of 3300 metres. We were rewarded with a 180 degree view of the Himalayas, a complete view of Dhanaulti and a view of the blue Shiwalik hills. 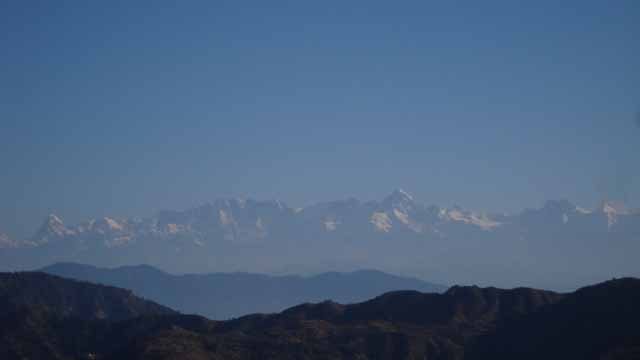 Tapovan was truly very scenic and peaceful. We rounded off the day by having good food at our hotel. It gets very cold in the night in Dhanaulti.

We again woke up early in the morning to witness the sunrise . We went to a viewpoint in Dhanaulti, and from there we could see the snow capped Himalayas at its best. Luckily for us ,it was a clear day so we could see the peaks of Banderpoonch, Swargarohini, Chaukhamba, Nilkanth and even Nanda Devi bang on. We were awestruck by the beauty of the mountains. The sunlight also had a magnificent effect on the Deodars, making it a perfect backdrop for a photograph. We then had breakfast in our hotel. 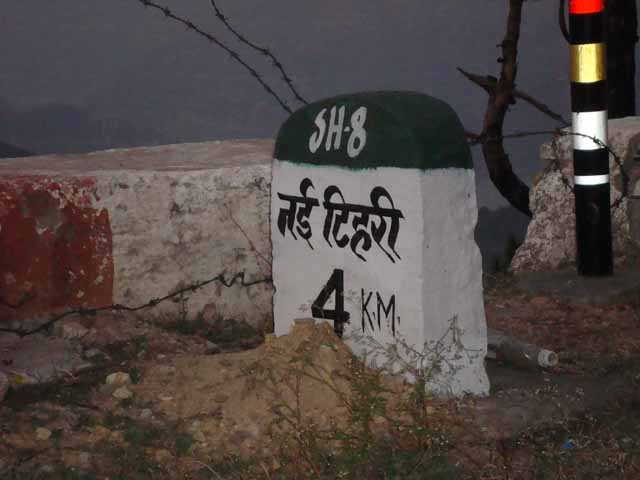 From then on, we planned to visit Tehri passing through Kanatal, Surkanda Devi, Chamba and Bhagirathipuram. We were lodged in the THDC (Tehri Hydro Development Corporation) Guesthouse in Bhagirathipuram. We reached the guesthouse by 1300 hrs at noon. The lunch there was homely and hot. After the lunch, we rested, as we were exhausted, we rested awhile. We had managed to get a written permission to visit the inside of the dam, so we left for the dam at 3 PM. We visited a few viewpoints which were really close to the water. Then,  we reached the powerhouse and turbines, which are built inside a hill. Since it is deep inside, there is a ventilation chamber for oxygen. We toured the powerhouse also. 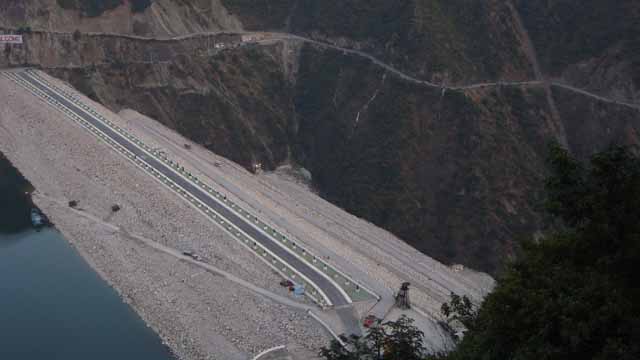 The dam was built at a cost of $ 1Billion with the help of Russian experts. It was planned in 1964 and started in 2006.  Due to this 150 villages, including Old Tehri were submerged. Currently, Tehri Dam produces 1000 Mega Watts of current. Initially, the idea was rejected by the natives. It was also declared to be unsafe as Tehri is a seismic zone. However, the engineers made it a rock dam, as a result of which earthquakes do not affect it. We were spellbound by sheer scale of the dam. New Tehri was our next destination. We went up to there but came back as there was nothing to see. But we went to sleep dreaming about the dam and how it was a man made marvel as well as a man made disaster.

We started at 11 in the morning straight for Delhi. We also wanted to halt at Rishikesh and enjoy the atmosphere there. We drove from B-Puram to Chamba and from there to Rishikesh via Narendra Nagar. We managed to cover the 70 km distance in a span of 2 hours, thus keeping good time. We stayed at the police guesthouse on the banks of the Ganga for 1 hour. We washed our hands and legs in the river too. We did not have much time after that, so we had to quickly leave for Delhi. 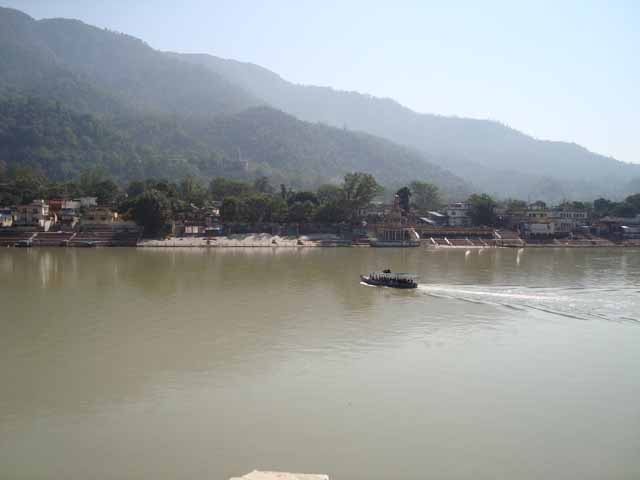 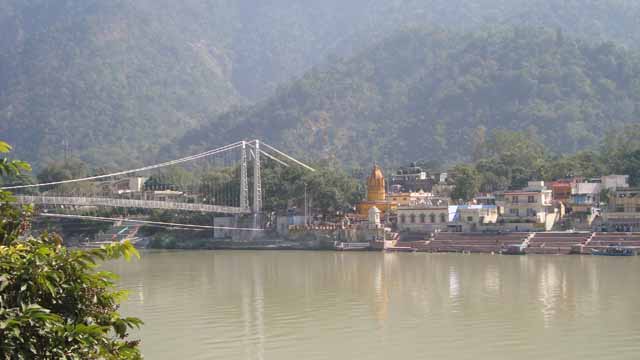 Enroute, we stopped in a village to observe the jaggery making process. We got quite a lot of sugarcane too. But as soon as we reached Meerut at 6PM,, there was a humongous traffic jam. It took us 2 hours to get out of there. But again in Modinagar there was another bottleneck which delayed us for an hour and a half. We were irked by the slow moving traffic too. And again, the inevitable happened. In Ghaziabad, we had to wait for 2 hours again. We managed to reach our house in Delhi by 12 midnight. We had happy memories of the trip, but the traffic jams on the last day negated a lot of them.

Mussorie,Tehri and Dhanaulti-The trip of a lifetime was last modified: March 20th, 2020 by Sishir Mohammed

After going through so many posts of Ghummakkar, I  thought of trying my hand into it. Whenever I think of visiting some new place,…