On our fourth day in Kinnaur, our next destination was Kalpa. We left Sangla at around 9 AM and covered the distance up to Karcham in about an hour. As we hit NH 22, we once again faced extremely difficult road conditions between the garrison towns of Karcham and Powari due to construction work at the Karcham Dam.  Poor or non-existent roads combined with blasting which occurs at regular frequency and other dam related works had done a lot of damage to the roads. These roads, like the rest in Kinnaur are also cut into hard, solid rock, and gazing at them gives you a sense of the effort and time taken to build such a road. Driving through this stretch was the toughest part of our journey. At Powari,we took a left which would lead us to the district headquarters, Reckong Peo. Going straight leads one further on the Hindustan Tibet road to Puh and finally, Kaurik. 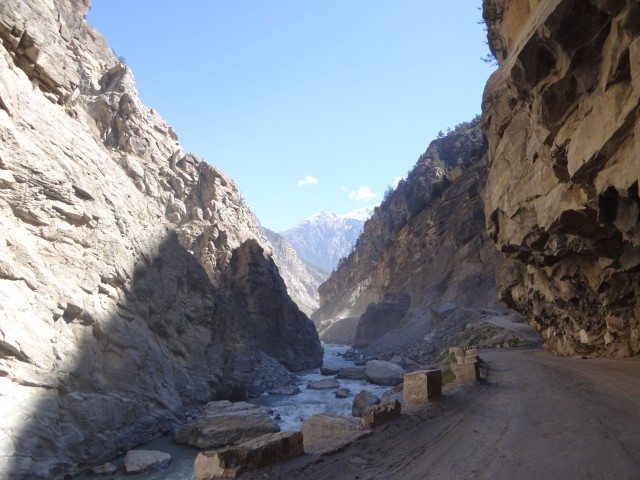 NH-22 after Karcham- Rocky, but beautiful! 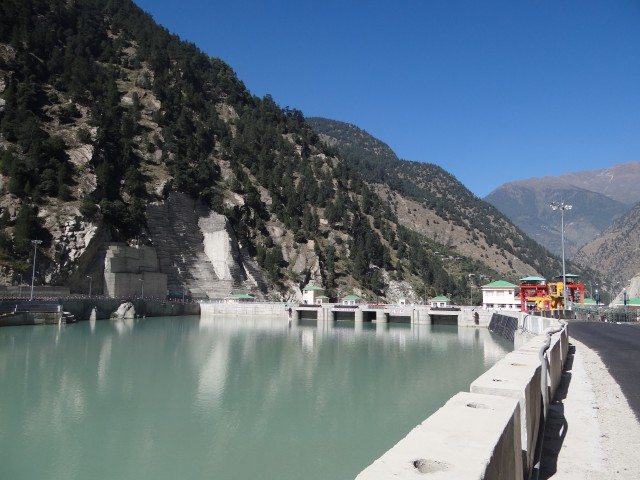 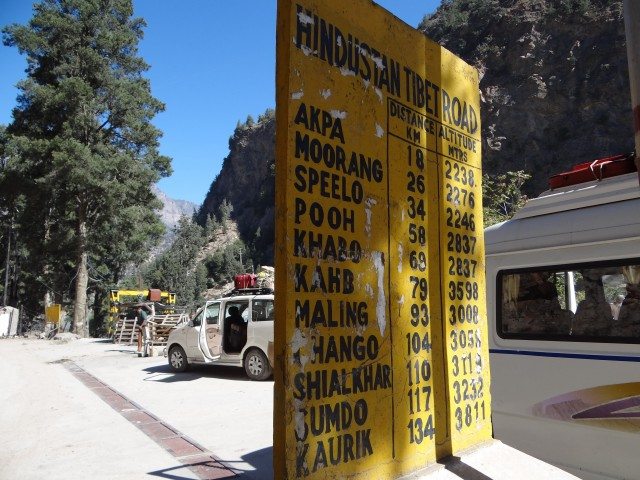 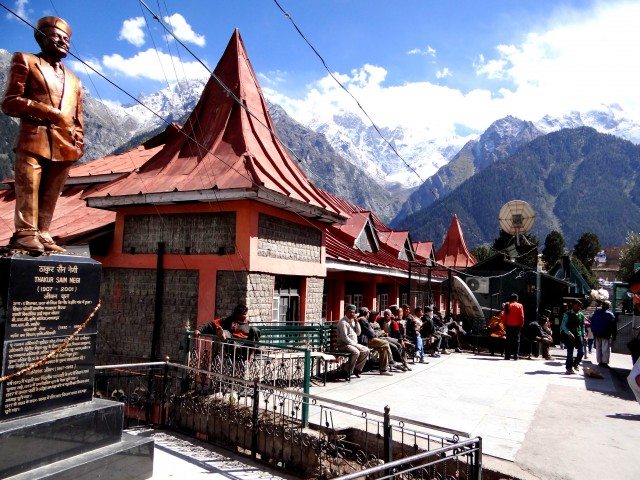 The bustling town of Reckong Peo 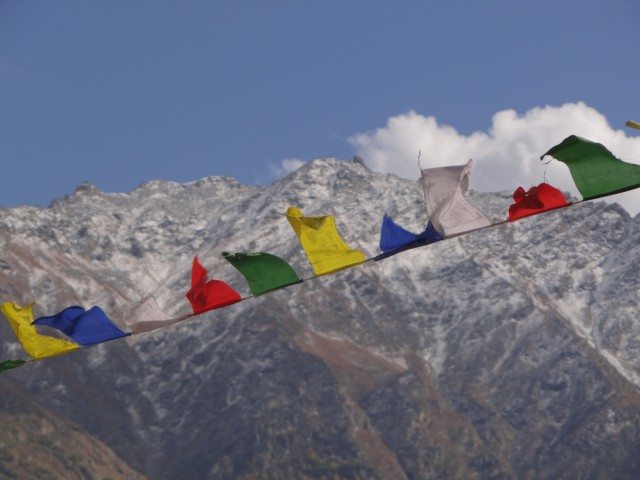 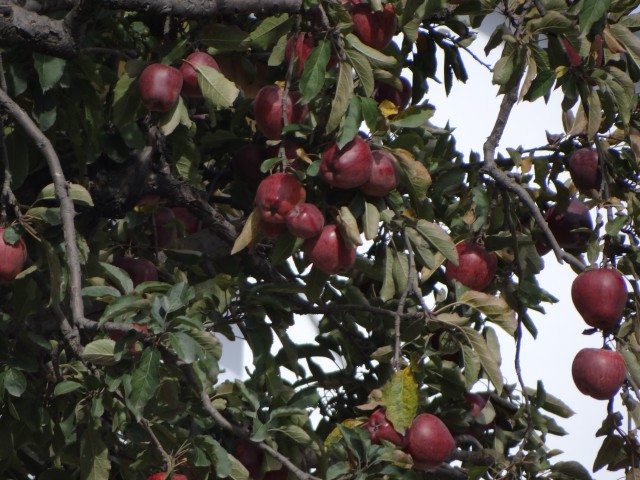 As is the case with most other parts of Kinnaur, there are very few places were you can eat good food. When we were in Reckong Peo, we were relatively pleased to see a decent looking hotel cafe, but the nonchalant attitude and poor service forced us to ditch all plans of having a hearty lunch . Instead, we bought some chips and biscuits to satisfy our hunger. Kalpa too, does not offer many options, although the Kinner Kailash hotel, maintained by the HPTDC, does manage to serve decent fare.

In the afternoon we spent our time visiting the main part of Kalpa and an adjacent village called Roghi, which is famous for its old wooden houses built in the traditional Himachali style of architecture. The distance from Kalpa to Roghi is about 5-6 KMs but the road is located on lofty mountain rock and is at times dizzying. Therefore caution is advised while driving. The  traditional houses in Roghi  are built sturdily  to resist the long, cold winters, and are made of  hard deodar wood and stone. We also visited the old Narayan temple and  a Buddhist temple in Kalpa itself. 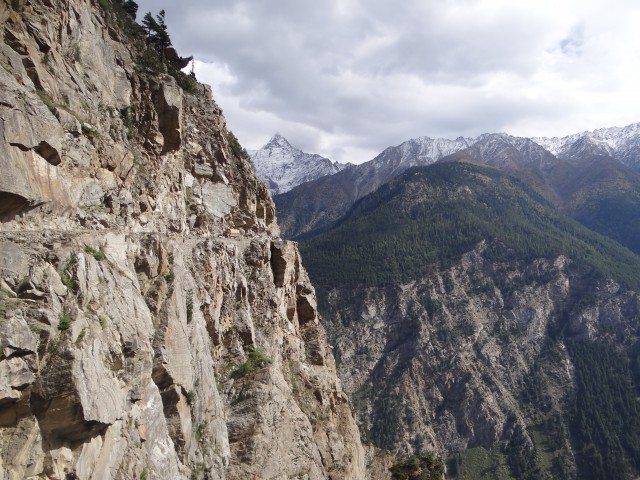 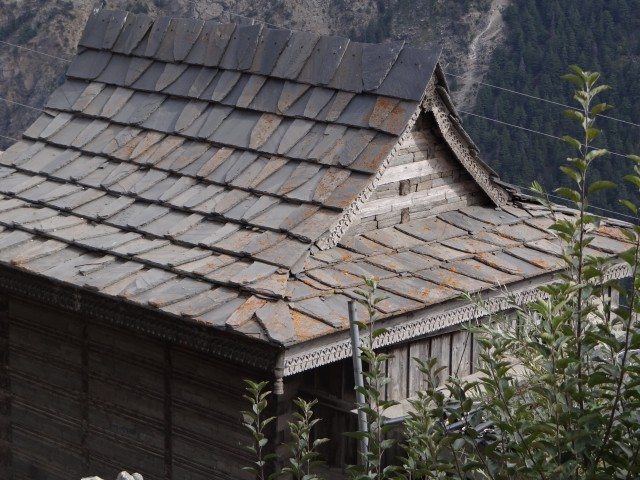 A traditional house in Roghi 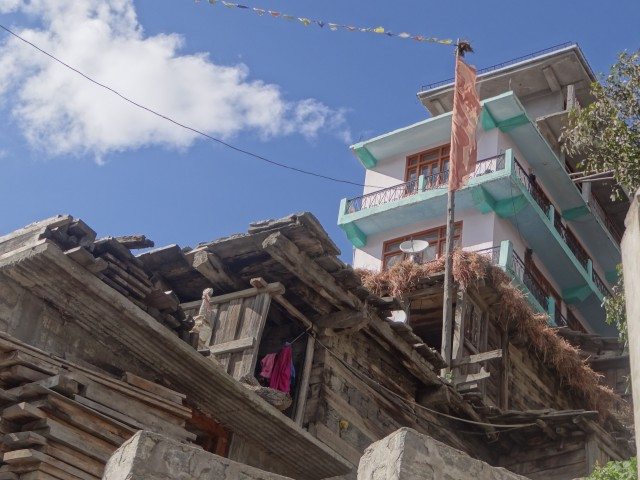 In and around Kalpa:

On our fifth day, we spent the majority of our time relaxing  in Kalpa and enjoying the majestic scenery. The sunrise over the mountains presents them in an entirely new hue, and effects one’s senses in a indescribable manner.  Towards the afternoon, we went to Reckong Peo again and explored the local market. This market is the main center of the town and all sorts of objects ranging from Tibetan cutlery to fruits are available here.  However, the main highlight was the Kinnauri shawl. These shawls are made of yak or rabbit wool and woven by handloom. There is also a distinctive pattern present on each shawl, which distinguishes it from its cousin, the Kullu shawl. We had an opportunity to watch the weaving of the shawl, an occupation carried out in some Himachali homes. Peo also has a Buddhist Temple and a towering golden statue of the Buddha . We could locate this statue, situated in the monastery of the Kinnauri Mahabodhi Society, only after asking a number of  people. The misguided directions to the Buddha temple I must say was the most frustrating. Even thought there is a massive potential for tourism in this region, the locals are still not very warm to tourists. We often got the feeling that we were outsiders and unwelcome in the land. 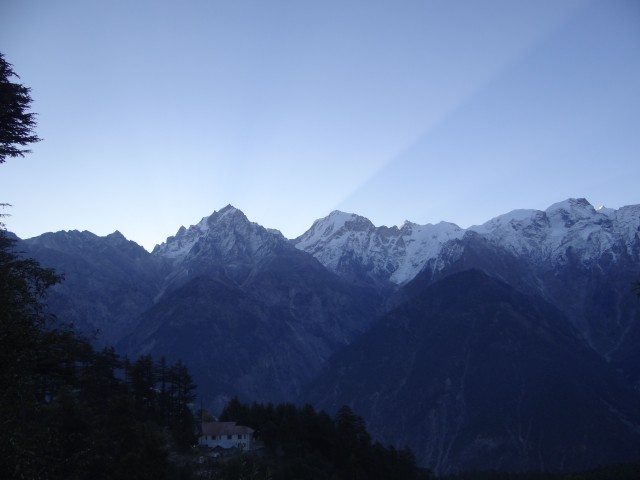 Kalpa, A sunrise to remember 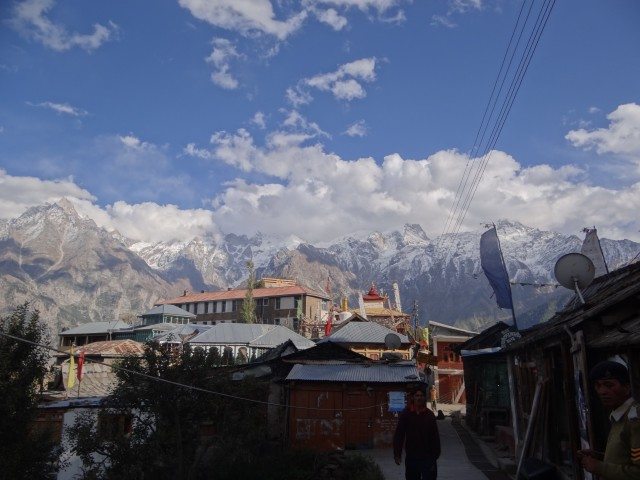 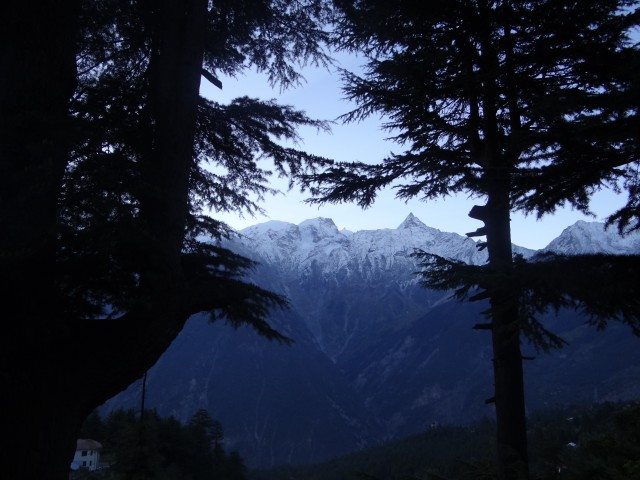 Sunrise through Deodar Trees at Kalpa 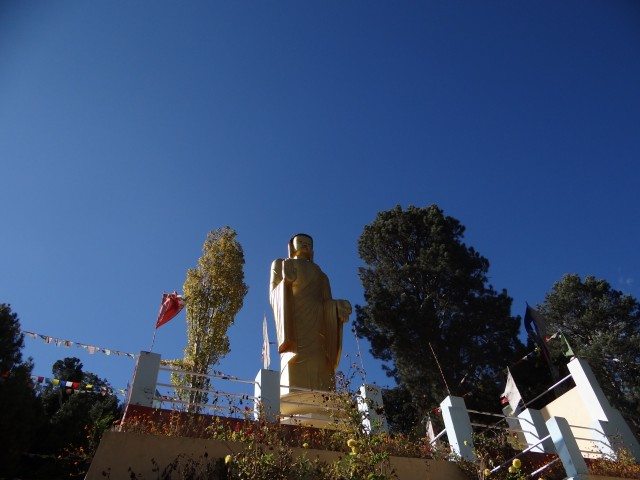 The Buddha statue at Reckong Peo 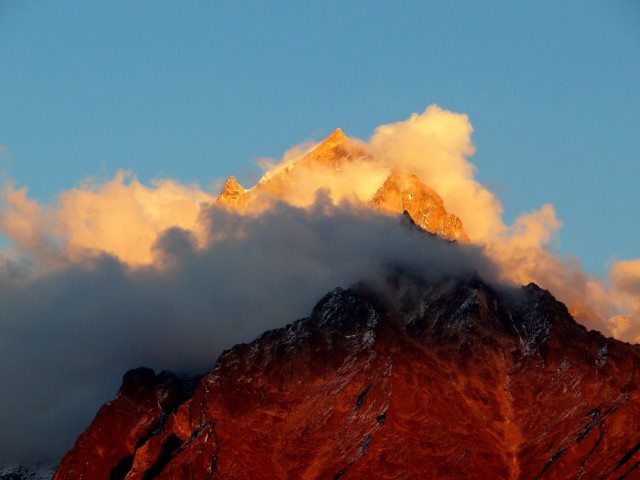 Sunset hues on the Kinner Kailash 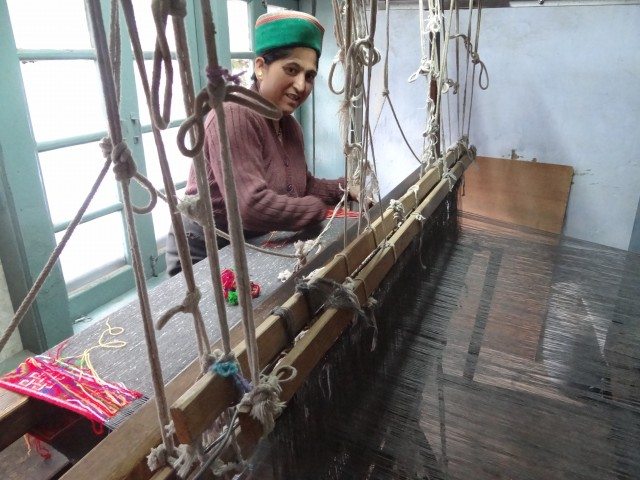 We started our  return journey from Kalpa to Shimla at around 9.30  AM and within three and half hours we reached Rampur.  We encountered bad patches between Powari and Karcham as well as between Karcham and Bhaba Nagar. To break the monotony of the road, we had tea at the HPTDC cafeteria at Rampur, which is conveniently located right beside the highway. The road conditions being good after Rampur, we managed to reach Narkanda in another 2 hours. Traffic being less we could enjoy breathtaking view of unending rows of hills near Narkanda.  However, as we neared Shimla we had to face traffic jams in the congested outskirts of the city, namely Sanjauli and Dhalli . Finally, we reached the “Vishram Guest House” near the Institute of Advanced Studies by around 5 PM. The total driving time from Kalpa to Shimla was thus about 7.5 hours, which was excellent timing, taking into account the condition of the roads. The weather was unusually pleasant in Shimla and we spent the evening lazing on the Mall Road, cherishing our memories of Kinnaur. 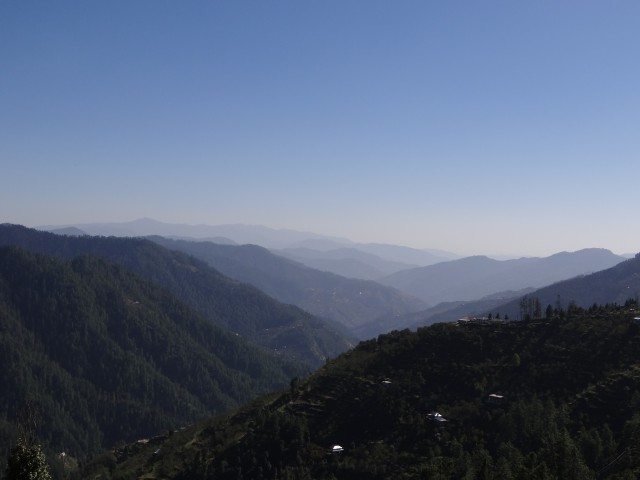 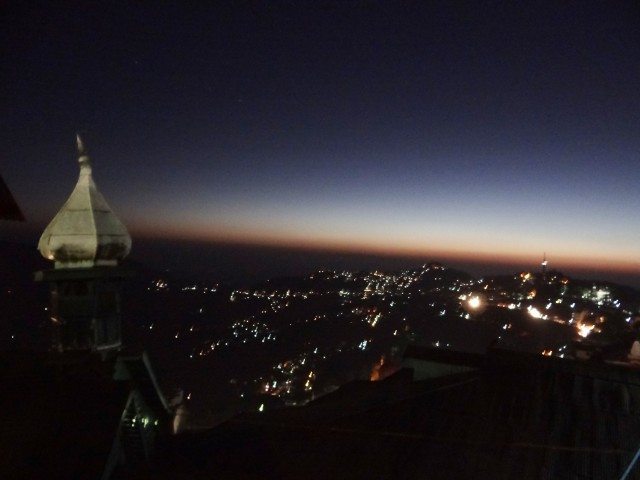 Since we were staying at a guest house near the Institute of Advanced Studies, we were lucky to witness the flag off of the ‘Raid De Himalaya’ one of the most difficult rallies in the world. The 5 day rally  flagged off at 7 AM witnessing which was indeed a memorable first time experience.

We left Shimla at around 10.45 in the morning. Again, we saved time due to the Himalayan Expressway. Being a Sunday, traffic was less on the Grand Trunk Road and we reached Delhi safe and sound by 7 pm, pulling the curtains down on an unforgettable trip through the magnificent land of apples. All in all, the trip  had its both sweet and sour moments.

To conclude, I would definitely say that the region of Kinnaur is one of the very few pristine, untouched holiday destinations remaining in the country. There are even moments when I think whether the journey was more beautiful than the destination itself. The apple, which is the reason behind the prosperity of this place, has also become a part and parcel of the life of people around this region. If I were to make a logo for Kinnaur, there would be no guesses as to what it would be. The apple. The next time I bite into one, I would definitely wonder whether it came from the orchards of Kinnaur.

Have you ever seen bearded Lord Shiva ?? Strain your brain to recollect if you have indeed seen a picture or idol of Shiva…