It was quite cold in the morning in Gulmarg when we woke up. But, the mountains right in front of the guesthouse, laden with fresh snow, was soothing to the eyes. After a hasty breakfast, we immediately left for the world famous “Gondola” of Gulmarg.

To our utter disappointment, we found out upon reaching there that the second leg of the Gondola was closed due to a malfunction. This leg would take a person to the top of the mountain at Apharwat peak, at 14000 feet. Nevertheless, we tried the first leg which dropped us at Kongdoor, from where we got stunning vies of Apharwat peak and even Nanga Parbat.

The drive from Gulmarg

After returning to Gulmarg, we did a bit of shopping at the local market before leaving for Tangmarg. Tangmarg is famous for having many apple orchards, some of which are open for tourists. We visited one of these orchards to see actually see how it looked like. The farm we went to had not only apples, but also saffron and walnuts. Seeing the apples hanging from the trees, we couldn’t wait to try them out, and so we ended up buying 5 kilos. They were just as good as they looked and were juicy and crunchy.

After leaving from Tangmarg with our haul of apples at 1pm, we reached Srinagar at around 2:30pm. Here we roamed around for a while, enjoying our last view of the pristine Dal Lake and the adjoining houseboats. At 4 pm, we bid goodbye Srinagar and proceeded to our last and final destination in Kashmir, Pahalgam. It had been recommended to us by many for its panoramic scenery. Pahalgam is situated around 95 km from Srinagar. One has to go south from Srinagar to Anantnag before taking another road back north to Pahalgam. It lies on the banks of the blue Lidder river, and is also the base camp for the ardeous Amarnath Yatra. Although there was little traffic, we took approximately 3 hours to reach the forest guesthouse in Pahalgam, where we were to stay.

After Betaab, we proceeded to Chandanwadi, from where the Amarnath Yatra starts. As soon as we reached, there was a flurry of guides and touts, trying to get us to see some glacier. We decided to see this glacier ourselves and went searching for it. But then, we saw a muddy patch of dirty ice, around which people were crowding. We knew it had to be the glacier, but, was it fit to be called a glacier? Take a look yourselves……… 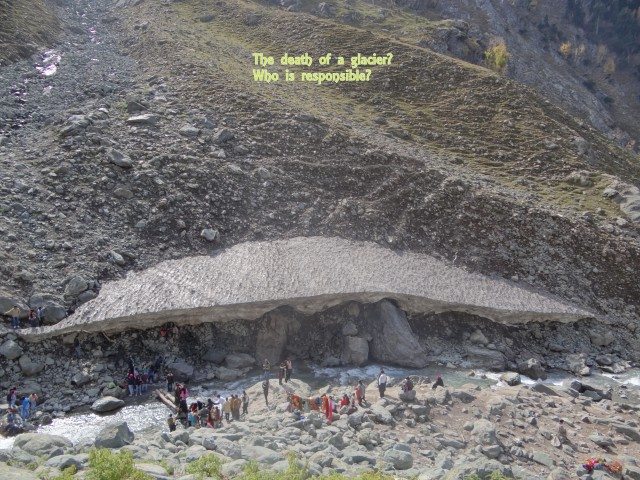 The dying glacier at Chandenwadi……..

Disappointed with this so called glacier, we returned to Pahalgam to have a quick lunch before again departing for Aru. Aru is the base camp for the trek up to the Kolahoi glacier, which is supposed to be affected adversely by global warming. The drive to Aru was scenic, but the destination itself had nothing much. You can also opt to take a pony to the nearest view point.  We reached Pahalgam again at around 4:30pm after our sightseeing. After doing some shopping at the market, which is always bustling, we had an early dinner before  sleeping, thinking about our last day in the Vale of Kashmir……….

We woke up early, knowing that we had a long day ahead. Our plan was to leave from Pahalgam and retrace our route to Anantnag, and from there we would move down south to Pathankot, where we were to halt for the day. All through the drive, we were relishing our last moments in Kashmir. The drive was largely uneventful, and there was not much traffic, unlike our horrific entry into the valley. We reached Pathankot late at around dusk.