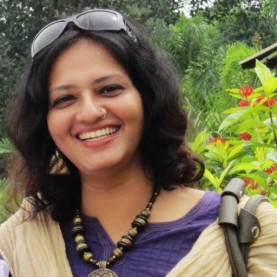 …A distance of 1 km appeared to take eons and finally we touched the foot of the grand Thar Desert. The majesty and the beauty are breath taking. On the horizon the sun was setting spilling thousand colors of oranges and yellows on the shimmering sand dunes…

The grandeur of the city is difficult to baroque in words, the wide roads, the glimpse of the unique architecture, the hospitality of people; everything is entrancing to transport one back to the ancient Rajput era. The popular song, “Kesaria balam padharo mare desh….” epitomizes the true spirit of the people of Jodhpur who inspite of being proud of their lineage and cultural heritage welcome everyone to their city with an equal amount of humility and love.

A short business trip to Kolkata brought me face to face with the inner tranquility everyone aspires to experience. A four day trip to…

Continuing with my ongoing journey of exploring this beautiful country of ours -India, and moving forward from where I left this majestic state of…

One could not hold back but marvel at the beauty of this 1464A.D grandeur built by man. The story goes in 1947, Raja Rajinder Singh of Neemrana moved down to Vijay Bagh as the façade of his Fort Palace crumbled and its ramparts began to give way, for fourty years he tried to rid himself of his liability but there were no takers.

We woke up early next morning as per our itinerary with excitement to experience some of the grandest waterfalls of the region. We started by witnessing the famous Elephant Falls in Shillong, The falls which is locally called “Kshaid Lai Pateng Khohsiew” or three step falls, was coined “Elephant falls” by the British due to the rock on the left side that resembled an elephant.

Dune bashing as it is popularly known is sure to take ones’ breath away literally as the land cruisers glide through the gold sand dunes in great speeds climbing steep dunes and then suddenly nose diving down from the equally craggy dune top.  For a second though it would feel as if being the last minute on earth! One can hear all sorts of screams from fellow passengers holding on to their dear lives. A mind blowing 30 min drive comes to an end at the campsite located in the heart of the desert.

Dubai is synonymous to “Opulence”, very place is grand be it malls, beaches, roads, deserts, buildings or architecture. Our trip to this exotic location was planned for the last week of February The weather during this time around is pleasant with occasional showers. We travelled by Indigo Airlines which gives an option of getting the visa issued incase round journey is booked by them.

By the evening it is time for the light and sound show in the precincts of the fort. The starry evening sky with the stories told through light and sound across various towers and buildings in the fort make the entire history come alive. A must watch for any tourist. A fascinating experience that will take one to edge of their chairs and marvel at the fate of dauntless men, women and children, who lived and thrived here ages ago, thus ended our trip to mystical city of Chittorgarh.

Rajasthan with its rich culture, grand palaces and forts has always been one of the most coveted regions aspired by Mughals and later by British. The story of Udaipur and Chittorgarh are no less. Udaipur was built by the valiant Sisodia king of the Rajputs, Maharana Udaisingh in 1553. It was the historic capital of the kingdom of Mewar. Udaipur succeeded Chittorgarh which was besieged and taken over by the Mughals. After 1818 it became a British princely state. Udaipur is popularly known as the “City of Lakes” with its numerous lakes major ones being the Fateh Sagar Lake, Pichola Lake, Swaroop Sagar Lake, Rang Sagar Lake and Doodh Talai Lake besides others. The city is flanked with ethereal gardens and mountain ranges.

The main attractions are the peacocks, deers and jackal sightings around the restaurant during night time together with the boisterous cacophony of the ecstatic birds through the day. Imagine how exciting could it be living that close to animals we only witness on wildlife channels and breathing the fresh intoxicating cool breeze in a moonlit night.