It had been a long tiring winter and a recharging vacation had been on the cards for far too long. Sushil – a close friend, suggested a new retreat in Uttarakhand. He had been there with his wife and another couple in his friend circle.

The name itself suggested just the kind of place I wanted to go to. Reminded me of the many exotic locales from fantasy books I had read over the years. I was sufficiently intrigued to check out their website at http://themistymountains.in and was sooner convinced.

It’s a long way so we took an overnight pit stop at Nainital and started for the retreat the next morning. The five hour drive through the hills was a little tiring but extremely rewarding with some amazing views all around. From Nainital, we went through Bhowali – Kainchi mandir- Khairna – Almora – Dhaulachina – Sheraghat. We stopped for 20 minutes at The Hill view restaurant at Dhaulchinna , a surprisingly neat place for its location in the middle of nowhere. 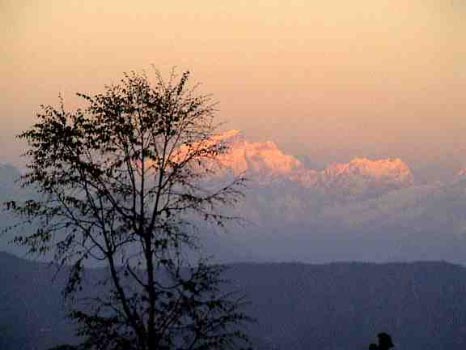 A little after noon , we reached The Misty Mountains Retreat wreathed by the snow capped Himalayas on one side to the green alluring canopy of forests on the other. As we entered the premises of the retreat we could not miss the warm embrace of Mother Nature welcoming us with her open arms. The journey from the main gate to the retreat was equally thrilling and we could feel the adrenalin rush as our car (a Maruti Alto – comfortable for the three of us, my sister, mom and me) negotiated the topsy turvy terrain. 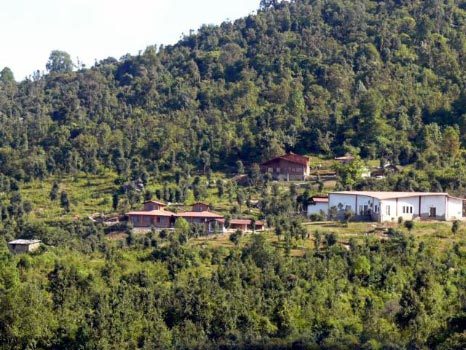 Vast forest as seen from the other side of the retreat

The intoxicating serenity and the picturesque location captured us as soon as we entered the retreat.

The silence was unbelievable and the air soothing and rejuvenating. We were assigned a rather large cottage to ourselves. It had two generous sized bedrooms and a large living room with huge picture windows which framed the snow peaks right in front of us. 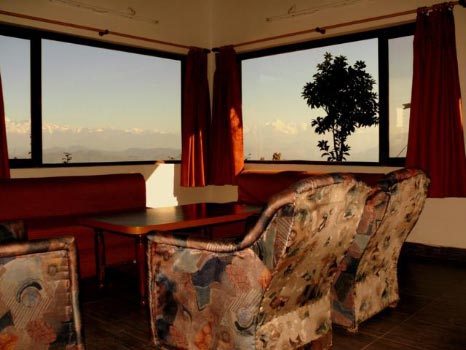 We were here to just relax and enjoy our time together as a family but the place is ideal for all kinds of nature lovers who would also want to explore the rich flora and fauna of the Kumaon hills, adventure sports like rafting/mountain climbing or just sitting still and watching the beauty of the nature unraveling which most of us miss in the daily hustle and bustle of our city lives.

Later in the evening, as we were enjoying our tea outside our cottage, the owner of the property came by to ask if we were comfortable, we happened to mention that we wanted to see the sunset from the sunset point the guide was talking about. The views were absolutely clear so the owner insisted that we should make a dash for it.

He took us in his own car to the sunset point almost a kilometer away – which we could have loved walking to, but for the time constraint. As we got out of the car, we saw the most beautiful sunset I had ever seen in my entire life. It was like a large melting fire ball – breathtakingly beautiful. We went crazy clicking pictures – looking at the pictures now, makes me nostalgic, but being there, experiencing it is something else!

That night we chatted for hours looking at the stars from our living room picture windows – I was thinking about the time we used to sleep on our roofs in summers and mom used to tell us stories. Although it seemed really late with absolute silence all around but for sounds of nature – crickets and some thrushes that sang through the night and a lone barking deer somewhere nearby, the clock ticked 10 the last I saw it.

The sunrise view from inside the cottage, next morning was equally enchanting. I am not an early riser but I had such a peaceful sleep that I woke up early the next morning all fresh and fit to embrace the day and embrace I did. – the soft golden spill through the large windows brought a peaceful smile to us all. It was amazing to see the snow capped peaks change colors from deep blue to smoldering yellow to a fiery orange and finally a blue tinted white. It was a light and color show of nature!

The retuning monsoons in April was a phenomenon I was not aware of – but we saw them from close quarters and the next few hours were of an ever-changing weather from warm calm ambience to sudden violent thunderstorm and shower that satiated all our senses. That was a treat alright!

We were at The Misty Mountains retreat for three nights and three days and it was one of the most memorable vacation I have had in recent times.

Incidentally, the area also boasts of innumerable remedial plants and some exotic species of birds, insects and animals apt for zoologists or nature lovers. One can feel the enthralling blessings of the divine in the atmosphere, the culture, the traditions and the temples located in the vicinity of the resort.

The Patal bhuvneshwar cave temple, which houses a number of sayambhu lings and shrines is said to be the only place on earth where a large gathering of Gods takes place, in addition to the a huge number of gandharvas (musicians from heaven), apsaras (damsels from heaven), vidhyadharas (singers from heavens), sidhas (yogis), rakshakas (demons) and nagas (serpents) to serve the mighty lord Shiva inside the Patal.

The Gangolighat Kalika temple where it is still believed that Ma Kali visits the temple premises at night with her soldiers and warriors, the Jageshwar temple which houses 125 temple shrines of various Gods and Goddesses has different and unique believes associated with each of them, one can also find the “Ardhnareshwar roop” of Lord Shiva and Parthvati in the form of the an age old Deodar tree!

From the historical point of view these temples are estimated to be around 2500 years old and acknowledged to belong to the post-Gupta and pre-medieval era. Adi guru Shankracharya visited these temples in the 8th century in the Katuri Dynasty and these temples range in the period from 8th to 18 century.

Once there, one will never ever feel the desire to get back to the monotonous everyday life.

The trip and more specifically the retreat totally rejuvenates one’s mind, body and soul and the haunting tranquility urges one’s innerself to return again to experience the benevolence of Mother Nature just like a child yearns to relive his childhood in the laps of his mother, no matter what the age.

I decided to plan a solo trip to Kasol and Tosh. As this was my first solo trip, there was a hesitation. But then after some homework, I found out a Travel consultant, who was taking a group of 20-25 people to the same place, so I finally decided to give it a shot & finally booked my trip. It was the Christmas weekend last year & the winters were quite nippy. For Kasol, if you are opting for public conveyance,