A long awaited weekend paved the way to exploring a whole new destination and this time around it was a wildlife expedition. We, my family, drove from Delhi to the nearest wildlife sanctuary, “The Keoladeo Ghana National Park” or more popularly known as “The Bharatpur Bird Sanctuary”. The route involved a drive through the NH2 till Mathura and then a right turn to SH33 that connects Uttar Pradesh to Rajasthan, Bharatpur. A drive of about 230 kms, route map courtesy Google maps, we reached Bharatpur in about four hours. A welcome relief from the concrete jungles of city life the gates of the sanctuary open to a lush green forest. 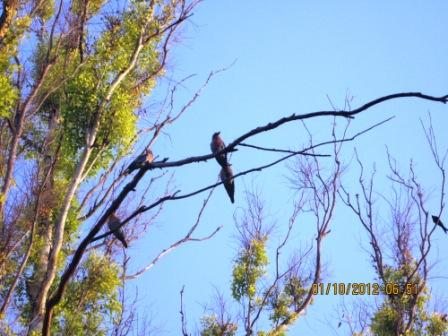 Narrow yet well maintained road that transverse the sanctuary lead to The Hotel Ashok- our refuge for next two days. The lodge is touted as the only hotel within the sanctuary premises and that in itself sounded so enticing and adventurous that we booked it in advance on a travel site. No sooner did we check into the hotel we had a brief lunch. Usually the hotel is booked all through the “season period”, which means the sanctuary is host to thousands of migratory birds and resident animals, September mid to March. 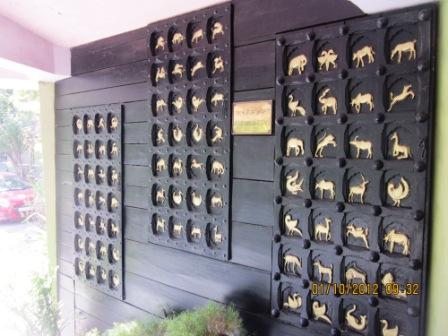 The story goes how the kings together with the then ruling British viceroys hunted birds for avocation. On one such occasion around 4500 birds were killed in a single day, nature conservationist Salim Ali was so appalled by the massacre that he literally pleaded and coaxed the king to turn the forest into a bird sanctuary so that these beautiful creatures could be studied and preserved for the future generations. Thus started the journey of the sanctuary, which changed many names and finally came to be known as “The Keoladeo National Park” on the name of the residing Keoladeo Shivling which quite miraculously emerged from the inner depths of earth when the tree standing above it was cut down. It is said that this is one of the “sayambhu shivlings” and thus is revered by Hindu devotees who flock to the temple in hordes during shivratri.
Although my review of the hotel is not very good and nothing like “living up to the hype”, one could manage staying there since the main attractions are the peacocks, deers and jackal sightings around the restaurant during night time together with the boisterous cacophony of the ecstatic birds through the day. Imagine how exciting could it be living that close to animals we only witness on wildlife channels and breathing the fresh intoxicating cool breeze in a moonlit night.

An early morning visit to the inner section of the park is a delight. One could hire cycles to ride by themselves or rickshaws where the rickshaw pullers double as guides too; however, trained guides are also available. 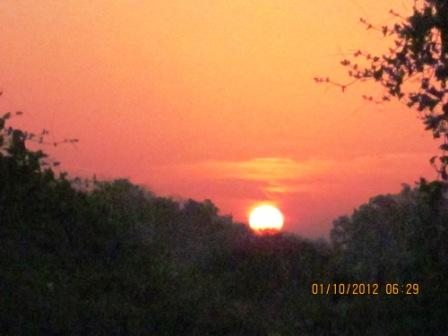 It is a wonderful experience meandering through the narrow lanes sighting thousands of varieties of birds ranging in sizes from few inches to about two feet! 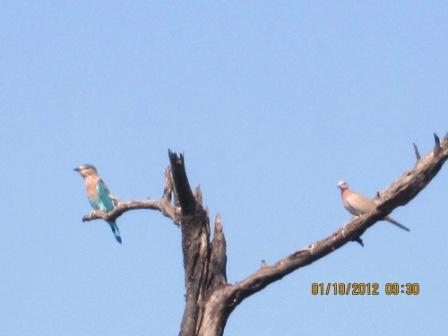 The plumage is so breathtaking one could find nature at its best this time of the year, it is said when the berry trees are ripe with fruits the forest floors look completely stunning. Scanning the forest canopy from the by-lanes requires well trained eyes, a good guide book or a guide and a binocular to sight the majestic birds such as herons, egrets, spoonbills, storks and ibis that flock to the breeding site from across the world spanning distances across thousands of kilometers from Russia, China, Srilanka, Europe and Tibet. 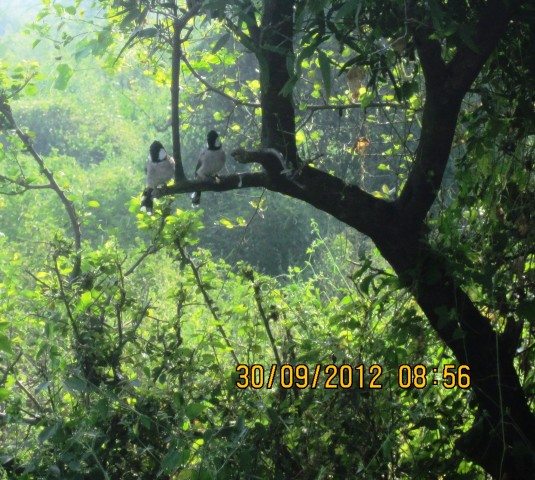 Its indeed a visual treat to catch the snake heads dry their wings before planning the next dive into the water, birds sitting patiently while catching fishes and listening to the male and female Saras crane’s symphonic calls hidden deep in the trees. 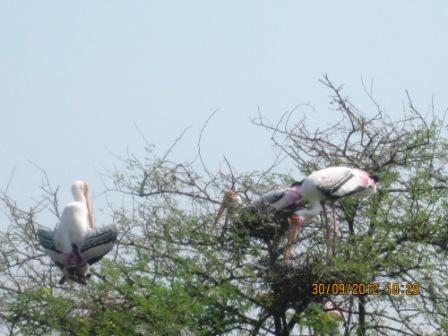 It is said that a Saras crane pair live and die together, so much for the mindboggling loyalty amongst creatures we feel are inferior to us! Various deers can be seen peering through the dense bushes looking at humans with equal curiosity. 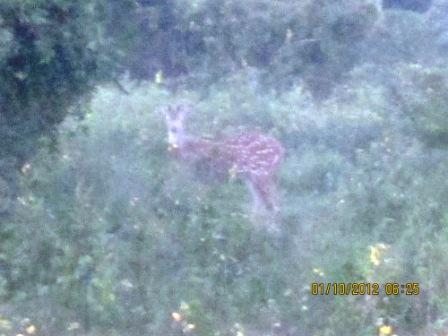 The most difficult ofcourse is taking snaps of the deers who are so swift that the moment one tries to click, the deer is far gone! Jackals sitting leisurely on the winding lanes completely unaware of human presence get stunned by humans and flee to the nearest hideout amongst the bushes before one could even realize its proximity. Other resident animals include the turtles, boars, hyenas, cows etc. 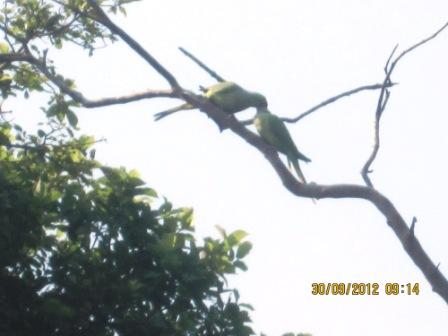 The main mantra though is ofcourse maintaining silence and making the least noise while walking so that the animals don’t get intimidated which is equally advantageous for the visitor too in capturing birds and animals in their natural habitat coursing through their routine chores. 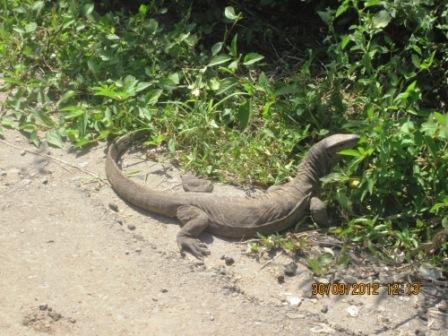 Other exciting sightings were that of the monitor lizards we often see on television lazily basking in the sun, chirpy squirrels following the rickshaws trails, confident monkeys transverse through their daily routes in search of food and the exhilarating butterflies in scores flying by. 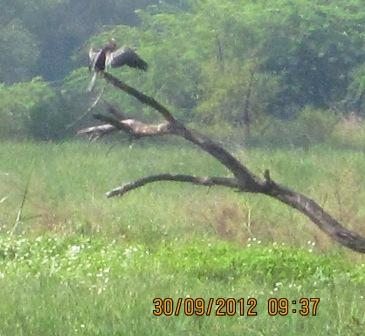 There are certain stretches where one can travel on foot to sight birds, insects, fishes and even plants to their hearts content. Although we could not see one but pythons stuffed with their heavy meals are a common sight. Locals have many interesting anecdotes and stories to share if one has a patient ear! All in all the entire visit may take hours together to complete, since the rickshaw pullers have a per hour rate, they can continue with their stories and trails until the visitor is tired or hungry. 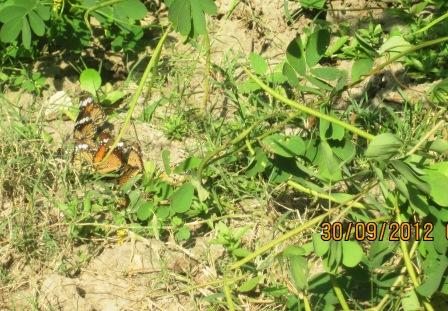 There are a couple of watch towers across the stretch of the park for observers while for devotees there is the venerated Shiva temple -the Keoladeo mandir which is thronged by many during shivratri. The day although very tiring, was still worth every drop of sweat. One could even be lucky enough to buy books and souvenirs, if the staff is not on leave at the book store located in the museum complex just besides the hotel. 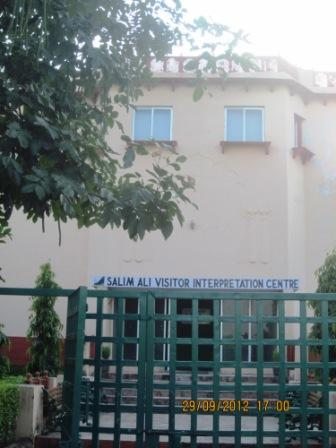 A walk through the museum could enlighten one on the founder’s contribution to the preservation of this sanctuary and making it available to the modern day nature lovers. 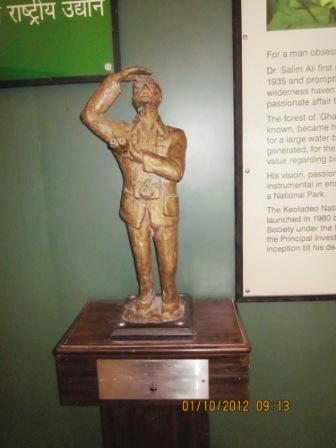 The day ended with a much needed good food at the hotel restaurant and the mesmerizing animal calls in the captivating moonlit night against the silhouetted peacock frames across the tree tops. 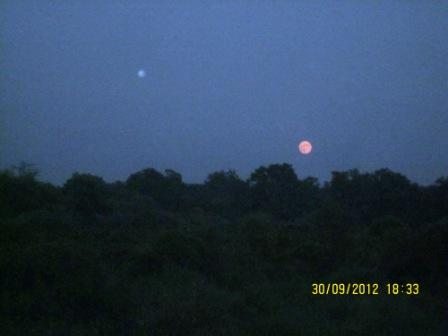 Since ours was a weekend trip, we could not manage visiting the other places which Bharatpur is famous for. Some of the places to explore are:

1) Ganga Mandir: The temple was built by Maharaja Balwant Singh in 1845 and is a typical example of the unique Rajasthani architecture with its exemplary facade vying for all the attention.

2) Laxman Mandir: Dedicated to the local deity Laxman, the younger brother of Lord Ram this temple is known for its intricate architectural work.

3) Lohagarh Fort: This fort is made of iron and was constructed by the Maharaja Suraj Mal. The fort stands erect and takes pride in the fact that it could not be invaded by either the Mughals or Britishers. The architecture of the fort involves the famous Asthadhatu gateway or eight metal gate.

Patal Bhuvneshwari was one of the most exciting tours for us. Before starting for Nainital ( Nainital is a Himalayan town in the Kumaon region of India’s Uttarakhand state, at an altitude  of around 2,000m. ) I explored about nearby places in Nainital. I do not want to explore the lake and another most visited place of Nainital.