The year 2013 came to end with one of my most awaited visits to the Sunderban Tiger Reserve, Kolkata along the India Bangladesh border. I had been planning long for the trip but somehow it kept on getting postponed. Having been lucky with tiger spotting at the Sariska Tiger Reserve earlier in the year was hoping to be lucky second time on. The trip was finally planned for 17th till 20th December with the one and only agenda being that of visiting the Sunderban Tiger Reserve. 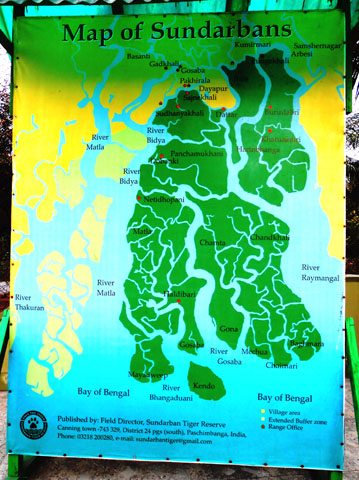 Early morning our cab took us, me and my cousin brother, to the bank of the Matla River from where the steamer takes over to navigate through the vast water body into the estuarine forest. The place is known as Canning and is not a much developed area although in history books one can find the mention of Canning Port developed by the British. The steamers for the Sunderban Tiger Reserve start their journey from the bank of the humble Canning. It was indeed a whole new experience visiting a reserve that is about 80% percent water. 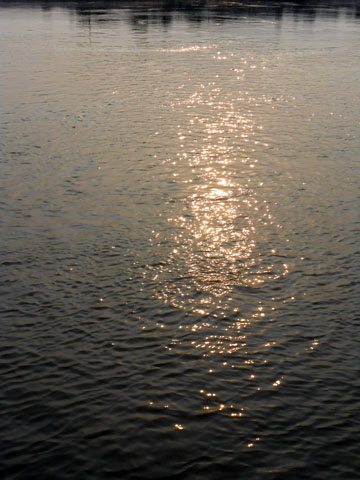 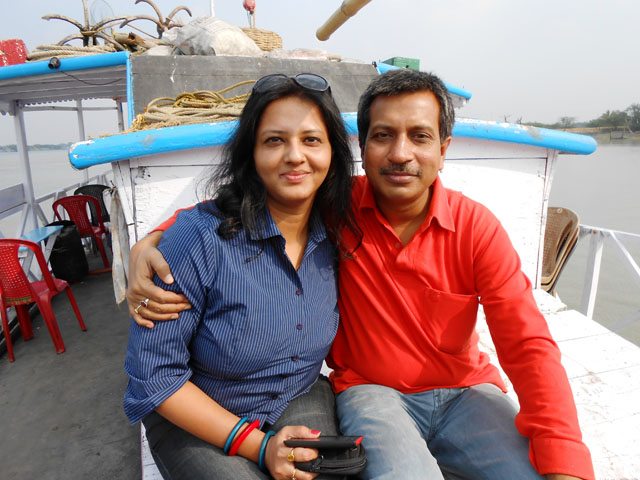 I with my brother

Thus started our journey to one of the largest mangrove forests in the world… India’s pride- “The Sunderban Tiger Reserve”; a world heritage site declared by the UNESCO. Sunderban besides being the world’s largest estuarine forest is also a honey collector’s delight. The forest is famous for its delectable honey, variety of fishes and the majestic Bengal tiger. It’s said tigers here are one of the best swimmers, crossing the rivers in a matter of few minutes. 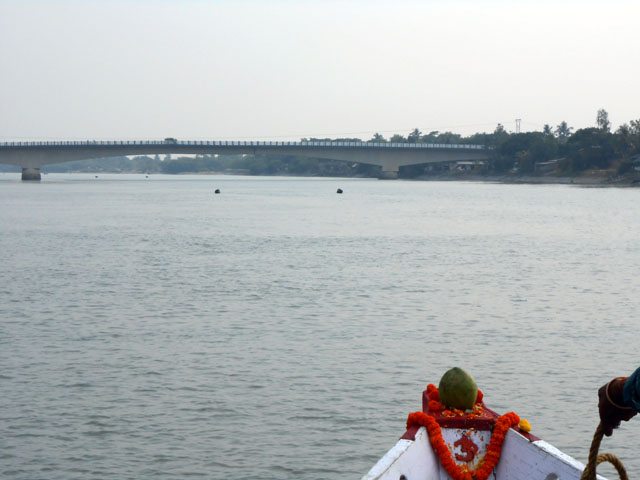 The start of our journey: view from our steamer

The reserve consists of the rivers, Malta, Bidya, Raymangal, Gosaba; tributaries of the river Ganga meeting with the Bay of Bengal. 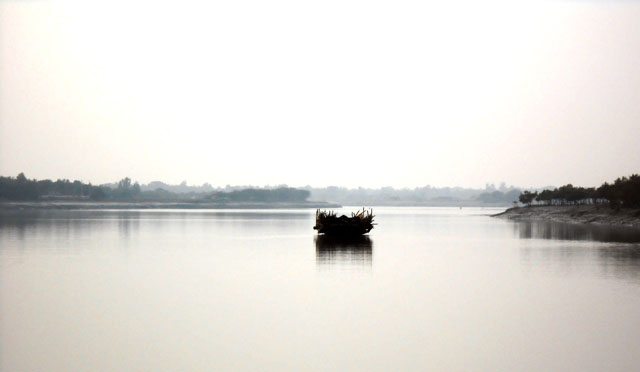 Fishermen boats on the Malta river

The entrancing beauty is beyond words, where one can only see the azure sky merge with equally breathtaking river at a distance, small village boys running around on the “kuchhe pakdandi” of the adjoining villages, million hues created by a lone cloud that tries to mask the majestic sun and the alluring riot of colors created by ripples on the bluish silver water. One is bound to get lost in the soothing effect nature weaves here. 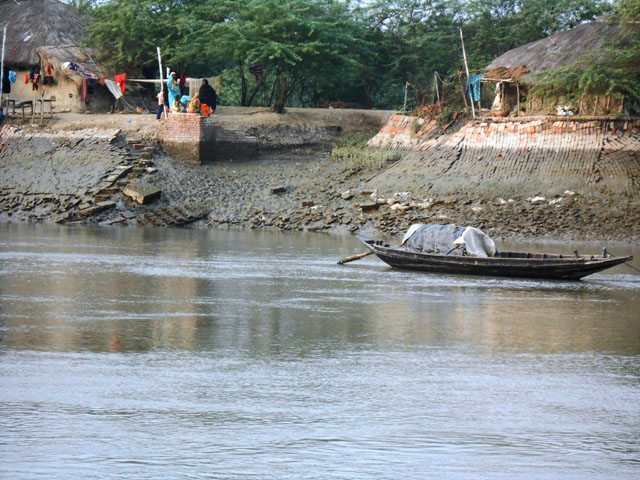 Villages on the bank of rivers

The first stop is at Pakhirala from where the permits are obtained by the streamers and boats to pass through the river. The second stop is Sajnekhali where tourists halt for the night to start the journey early next morning. 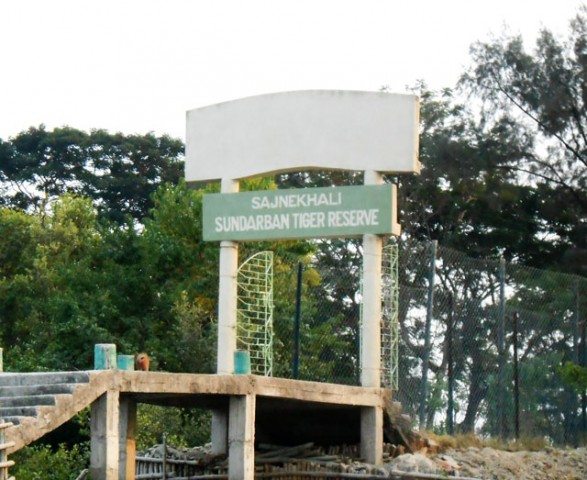 The second stop at Sajnekhali

Sajnekhali is a small village with small local shops, huts and now a host of guesthouses to house the tourists. Depending on one’s budget one can find a variety of choices or could even stay inside the streamers which have large resting places and toilets at basement level. We stayed at a lodge for the night and were lucky enough to witness a play staged by a local group, the “Story of Dukhe”, the landlord’s son and “Goddess Bonobibi or Bonodevi” who protects the honey collectors from tigers when in the forests. Bonobibi was a brave Muslim lady of the yore who is now worshipped as the protector of the forest- an apt example of the amalgamation of the Muslim and Hindu religion where one could find small temples with the idols of venerated Bonobibi. 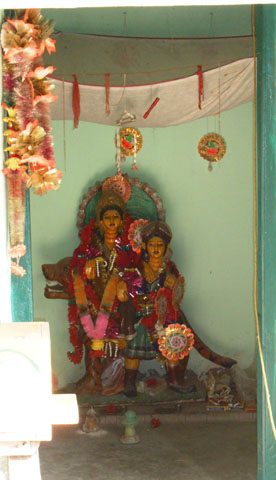 It’s said many honey collectors who go into the forest to collect honey are eaten by the tigers still they are revered creatures in Sunderban. One can see multiple red strips of clothes hanging from the branches of the trees while traversing the rivers, these red clothes indicate the presence of honey collectors in the particular area of the forest; the same are untied once the honey collectors return with their day’s collection.

Early next morning we woke to embark upon our journey deeper into the river. Although our naïve eyes could not distinguish, the guide who accompanied us could make out by the changing colors of the water- the start, end and merger of various rivers! The guides are also full of local stories and hair raising experiences. It’s always wonderful to be accompanied by a local guide. Our first stop for the day was at “Dobanki”, as our streamer anchored and came to a halt we were greeted by ecstatic monkeys. 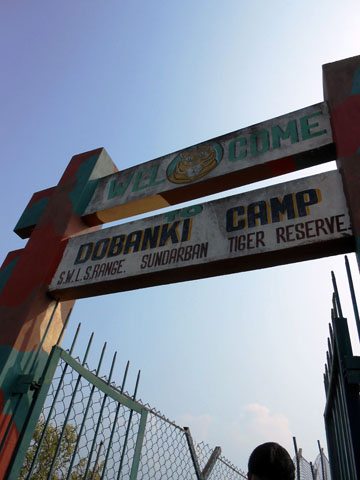 Entry Gate of the Dobanki Camp

A part of the Dobanki is wired and houses a museum that depicts the Sunderban Tiger, all the species of birds and animals that are found here and “Sundari” or the lifeline mangrove tree…hence the name Sunderban-, “sundari bon”. Whereas we were not lucky to catch the glimpse of a Bengal tiger we spotted an inquisitive deer, exquisite plant varieties, wild boars and water birds. 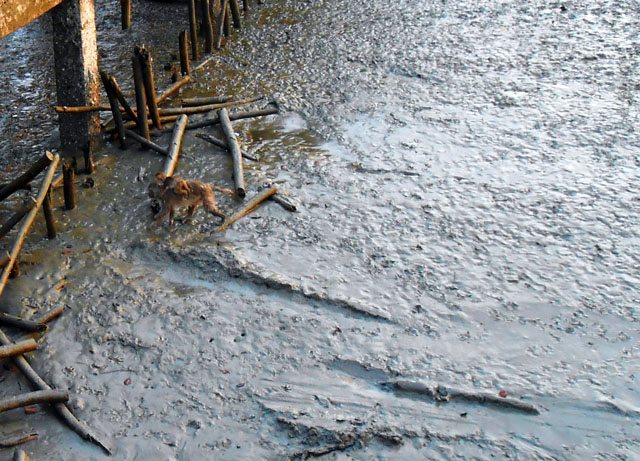 Monkeys awaiting us at Dobanki…

An artificial fresh water lake has been constructed inside the premises for animals since the river water is quite high in salt content. 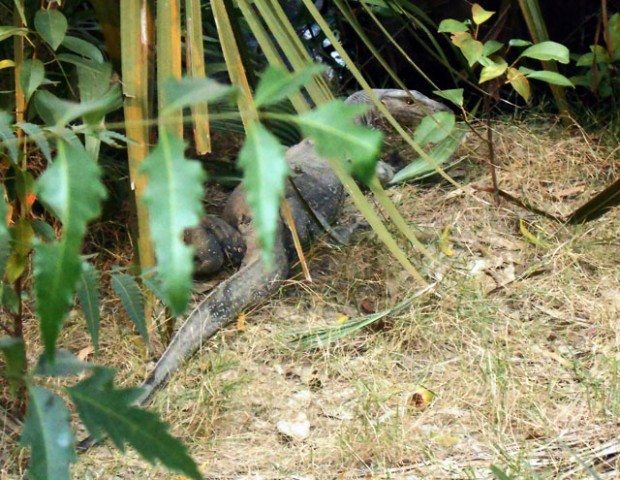 Monitor lizards were in abundance here basking lazily under the trees and bushes to cool themselves off. All of us really wanted to site a tiger but guess we were not lucky enough this time around. However, a notice outside the museum mentioned the last tiger siting was early morning just a day back. 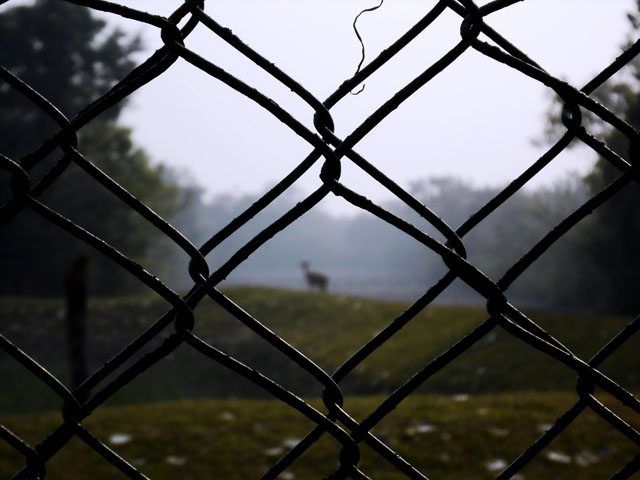 The lone dear at Dobanki 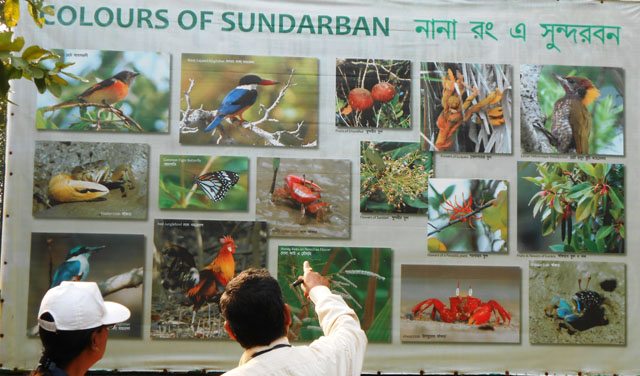 We returned to our steamer and resumed the journey. We sailed through the vast expanse of the rivers, we passed through the mangrove trees with roots upturned and scientifically known as the pneumatophores…it was indeed a delight to see nature’s adaptations to such harsh conditions.

Birds across the sky 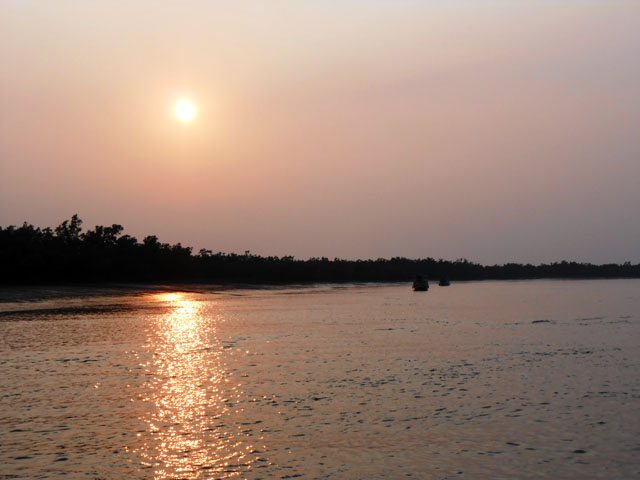 They hence create a kind of base on which the sediments settle, this helps in stabilizing the coastline and offer refuge to fishes from predators. They are so designed that they are able to extract fresh water from the salty river water. 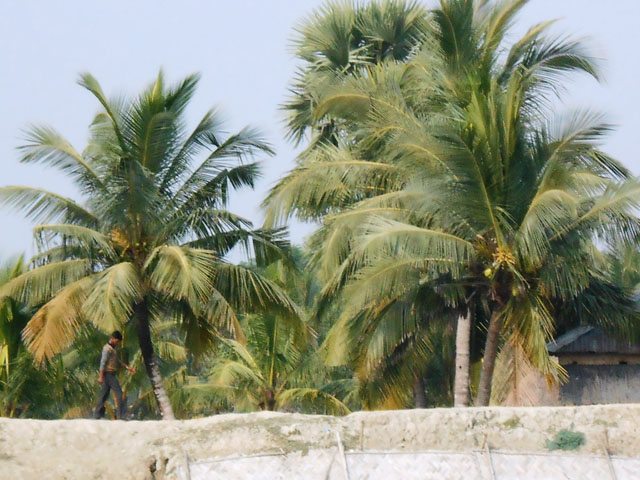 It was time for lunch now and our cook, a member of the team whose boat it was prepared delicacies like malai prawn, lobsters, tomato chutnis with loads of rice and chapattis! 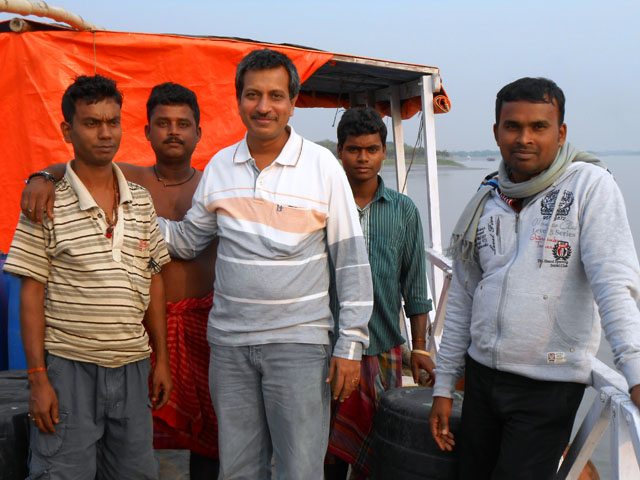 It is indeed a treat for food lovers… enjoying hot spicy food in the midst of nowhere while swaying through the calm river water. 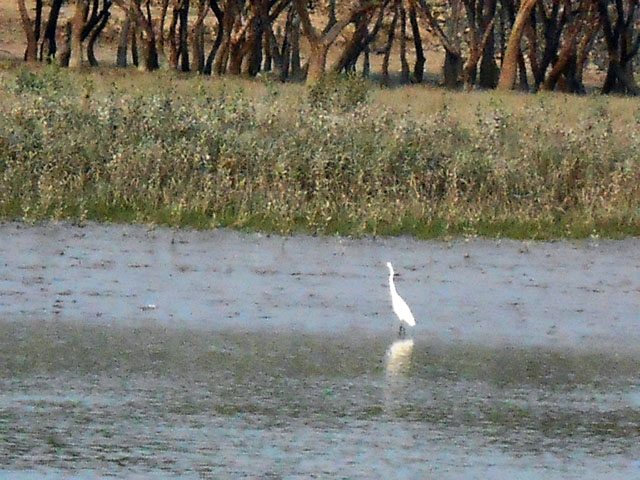 Cranes of the Sunderban

Soon we touched the far end of the Malta River that merges with the Bay of Bengal. Our guide who was quite knowledgeable being a local villager showed us the change of the color of the water while the river became one with the Bay of Bengal. Nature at its best, floating banks, dense Sundari trees, chirping monkeys, cerulean sky and the unbounded spectacular river! 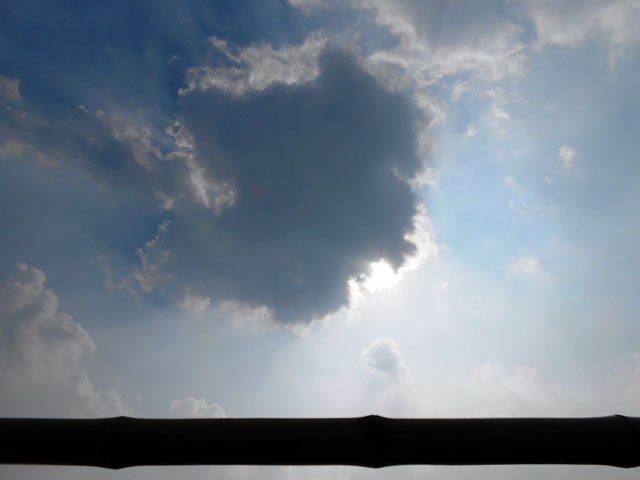 The morning sky as appeared from the steamer

It was definitely revitalizing getting lost in the embrace of Mother Nature. One can sit for hours without words just marveling at the magnificence of Mother Nature. Words undeniably fall short; it’s an experience one needs to undergo to feel the magic!

Touching the Bay of Bengal we started our journey back to return to the routine humdrum of the city life. 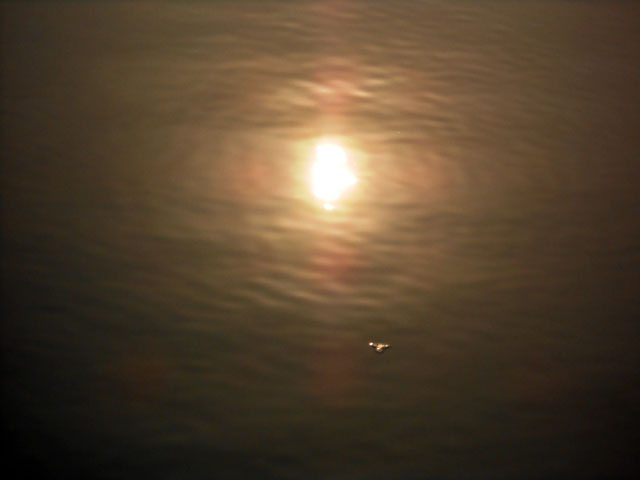 Colors of the Sun

In a couple of hours we reached the Caning bank from where we headed back to Kolkata. We exchanged our numbers and bid adieu to our fellow passengers, it was an enthralling trip all in all. Just one desire left to revisit the tiger reserve and be able to witness a Bengal tiger in all its grandeur. Kolkata I will return soon.

The Sunderban Tiger Reserve -Nature at one of its best was last modified: October 2nd, 2021 by Mala Raman