“There is always a silver lining behind the dark clouds”, overcoming the dark cloud of “Fear” did we touch the silver lining of the beautiful “Valley Of Kashmir”. Little did we (our family) know this trip would leave us with so many spectacular and warm memories of the wonderful people of Kashmir.

This time around we decided to travel to Kashmir, the most “in news” state of our country, for all the very wrong reasons though! The Gurupurb holiday clubbed with a weekend gave us the three days to plan our trip. We left for Kashmir, fraught with all the apprehensions in the world, and yet excited. On arrival at the airport we were warmly greeted by Dr. M.H Wani, an academician, working towards nation building in his own humble ways; however we didn’t know how our myopic views about this breathtaking place were to be altered by the end of this trip!

The Colors Of Kashmir

The Valley Of Kashmir

We stayed with a family known to us in Srinagar, the capital city of Kashmir. The architecture patterns adopted here is quite different from that in Delhi, the houses have slanting steep slopes to make way for the snow with drainage pipes snaking through the contours to let the water, accumulated due to rain or snow, to seep to the ground. The whole city looks so amazing with big two-three storied houses/buildings with steep slopes.

[The state is quite opposite to what is usually portrayed by the media with happy people all around busy in their routine chores in phirans, contrary to the only inhabitants “the security personnel and BSF”, as is often thought by people like us, coming from different parts of the country., courtesy our media and politicians.

The beauty of the state cannot be described in words; it has to be seen to be cherished in the real sense of the word. It appears as if Mother Nature has blessed this valley with all her bounty and grandeur! The Valley is full of the mighty mountains, lush greenery, and blossoms of pinks, whites, yellows and flowers of all the rarest varieties. The Chinar trees account for most of the elegance, painting the entire canvas with myriad of colors. It is often quoted by the locals that our former Prime Minister, Mrs. Indira Gandhi visited Kashmir often to relish this picturesque state when the chinar trees were in their full bloom. It takes one’s breath away to see the nature in all its colors of greens, oranges, yellows, and reds! The skies here are awesome azure with cotton like ivory clouds! The magic the valley wreathes one with is accentuated with the quaint charm of houseboats or Shikaras of Dal Lake. It’s said that the houseboat were introduced accidentally in Kashmir. Most of British Civil and Military officers serving in the plains used to come to Kashmir with their families for holidays. They wanted to build houses for themselves but the Maharaja (King) of Kashmir of that time was suspicious of their designs and did not allow them to buy land, so they built the first Houseboat- named Victory designed by Mr. M T Kenhard in 1888. Later on others copied this design and now there are about 500 Houseboats in Srinagar for commercial purposes.

We got a chance to actually experience what heaven could be like, the “Jannat”, as if often said about the Valley. We visited places like the Mughal Gardens namely, Nishat Bagh: The Garden of bliss laid down by Asif Khan Father of Empress Noorjahan in 1633AD on the bank of Dal Lake with Zabarvan Massif at the back. One can enjoy the magnificent view of the Dal Lake and the snow capped Pir Panchal range to the west of the valley from Nishat.

Shalimar Bagh: ’The Abode Of Love.’ It is said to have been a village, built by Paravarassna II. He used to stay here when on a visit to Sukhswami, a saint living near Harwan. In 1619 Jehangir ordered a garden to be laid out on this spot, calling it, Ferrah Bakkash (Delightful). In 1727 A.D Zaffar-Khan, a governor during the reign of Shah Jahan made an extension of it and called it ‘Faiz Baksh’ (Bountiful). The garden is laid down in four terraces, rising one above the other. A canal runs through the garden lined with polished stones and supplies water from Harwan.Chasma – Shahi. 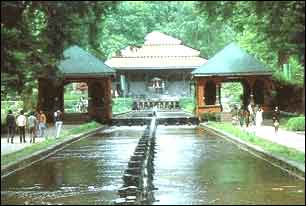 Hari Prabat: The Hill of Hari Parbat which is visible from every part of the city, 400 feet above the plain. Legend says the hill grew from a pebble dropped by the goddess Parvati to crush a demon, in the form of Sharika bird (Maina). This is called now Hari Parbat.
Shankrancharya Temple: The Shankaracharya temple is situated in the Srinagar district on the hill known as Takht-e-Suleiman. It is housed at a height of 1100 ft. above surface level of the main city on the hill. It is believed that Raja Gopadatya got the temple constructed in 371 BC, giving it the name of Gopadri. The great philosopher Shankaracharya is supposed to have stayed here when he visited Kashmir to revive Sanatan Dharma. This incident, which took place ten centuries ago, led to the renaming of the temple as the Shankracharya temple.
Hazrat Bal: The Hazratbal mosque is situated in Srinagar district, on the western banks of the picturesque Dal Lake. Facing the beautiful Nishat Bagh, the mosque offers a spectacular view of the lake and the mountain afar. This revered shrine houses the Moi-e-Muqqadus (preserved sacred hair) of Prophet Mohammad. Public display of the hair takes place only on religious occasions. Some of the other names of the Hazrat Bal mosque are Assar-e-Sharief, Madinat-us-Sani and Dargah Sharif. One of the most revered Muslim shrines, Hazratbal is an epitome of the love and respect of Muslims for the Prophet.

Since we were short of time we planned a trip to Gulmarg,
56 kms from Srinagar, one and a half hour journey, 2690 mts above sea level. .It is also called the “Meadow of flowers”.

It is one of the most splendid hill resorts in the country, falling in the Baramulla Distt of Kashmir. Gulmarg hill resort boasts of not only picturesque locales, but also of the highest golf course in the world. Situated at a height of 2,650 m, Gulmarg golf course is one of the major attractions of the awesome hill station.

.Along with that, Gulmarg is also quite famous as a skiing destination in winters. The drive to Gulmarg is as beautiful as the hill station itself. Alongside the road, the scenery changes from boulevard of poplar to smooth vastness of rice fields, sprinkled with some pleasing villages. The fir-covered hills characterize the ascent to Gulmarg, Kashmir.

The drive to Gulmarg is filled with a number of colors, changing with the season. From the translucent green of spring to summer’s rich emerald to autumn’s golden hues, the scenery has something to offer in every season. One can also take a Gandola ride (cable car ride) from this “Meadow Of Flowers”, taking the tourists up to Kongdori, to enjoy the magnificent sights of the meadow from the top.

One can then take a walk to far stretches to witness the alluring and welcoming valley, explore varied species of trees and plants or simply revel at the stunning beauty savoring a cup of hot “kava”-the Kashmiri tea!
Other places to visit are Pahalgam, Sonmarg, Yusmarg, which ofcourse require time and due to time constrain, we could not cover the places. But surely we were touched by the simplicity and hospitality of the locals and we left for Delhi with a pledge in our hearts to come back to this magical state again and re-ponder on what all is being fed to us by the media. This state is a part of our country, and all of us belong to India. We need to rethink about the divide of nation on basis of religion/ideas and traditions. Are we actually doing justice to the people of Kashmir or for that matter the enticing state of Kashmir? So lets us come together, put all the bad taste behind and visit Kashmir to experience first hand the people and the state in all its brilliance.

Bringing Back Some Hues from the Beautiful Valley Of Kashmir was last modified: March 20th, 2014 by Mala Raman