We started our road trip for Paro next morning, a journey of 4 hours and distance of 140 kms. The very first destination on our list was the National Museum of Bhutan. 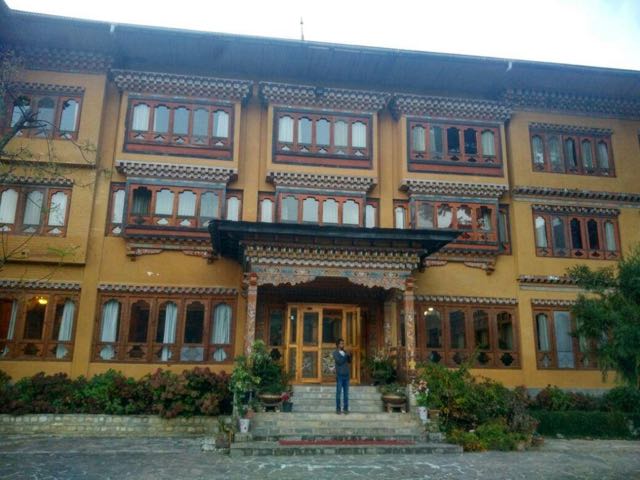 Built in 1968 by the third king Jigme Dorji Wangchuck, the museum educates the visitor about the culture, tradition, artistry, religious beliefs as well as the flora and fauna of Bhutan. The museum in the original form is under renovation after it was damaged by the massive earthquake that hit Nepal.

Some of the exhibits are preserved and kept on display for the visitors in the adjoining building. The clay statues are one of the most impeccable displays in the museum. Bhutanese people have various folklores regarding incarnations of the Buddha, victory of these incarnations over demons and the temple or fortress thus built in their honor.

One can therefore see many such incarnations moulded in clay depicting distinct tales. Information of regions segregated based on altitudes, climatic conditions, soil type, vegetation, annual rainfall, flora and fauna of the entire land of Bhutan is available. One can even get mesmerized by the sounds of various birds echoing in the premises as the television plays data about them repeatedly.

Other striking exhibits at the museum were the models of the “Olathang Hotel” and Tiger’s Nest replete with rooms and people. While on one hand was the luxurious Olathang hotel built way back in 1974 for premium guests who had come to witness the coronation of king Jigme Singye Wanchuk, one of the largest and oldest hotels of Bhutan sprawling over 28 acres; on the other hand was the Tiger’s Nest exhibit made with utmost details which stood for the religious facet of Bhutan.

The national museum now was originally built as a watchtower way back in 1649. Coincidentally we stayed at the hyped Olathang hotel while in Paro.

Next on our list was the Kyichu Lhakhang, built in 659 by the Tibetian King Songtsen Gampo. It is believed that the temple was visited in 8th century by the Padmasambhava and conceals many spiritual treasures. 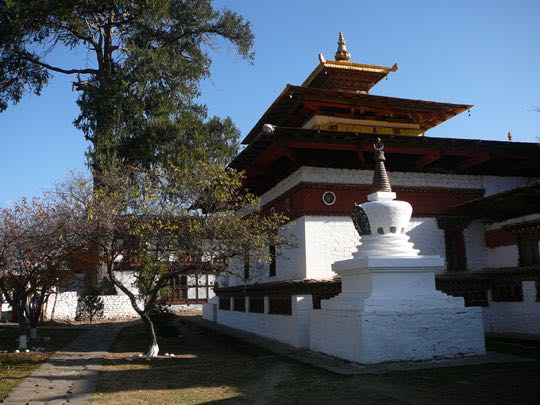 The temple is thus revered by the followers who can often be seen circumambulating the temple while chanting prayers and spinning the prayer wheels. There is a belief that the two orange trees in the courtyard of Kyichu Lhakhang bear fruit throughout the year.

This is one of the oldest temples in Bhutan and intriguingly, if one receives a fruit from the orange tree without forcing the fall, one’s wish is fulfilled. Quite fascinatingly, while we were with our guide, a fruit fell from the tree purely by the gushing wind!

In the ethic clothes

Although we missed our targets most of the times, we were successful in hitting the nail at least a couple of times. It was indeed refreshing to sharpen our shooting and aiming skills! We thoroughly enjoyed the session. 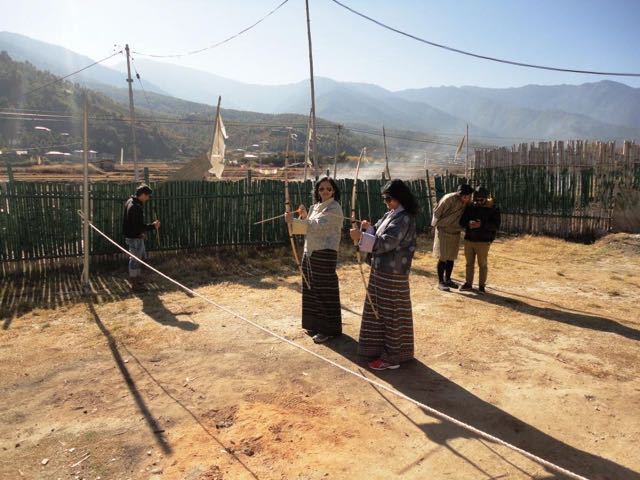 The evening was left to our disposal at the Olathang Hotel.

Early next day we were ready for the trek through the formidable steep mountain ranges.

The Taksang Monastery hangs alarmingly over a cliff at 10,240 ft about 900 mtrs (3,000 ft) above the Paro valley. The story goes that Guru Rinpoche, one of the incarnations of the Padmasambhava flew on the back of a tigress who was also a disciple of his to this place to pin the tiger demon, thereby giving it the popular name of the ”Tiger’s Nest”. 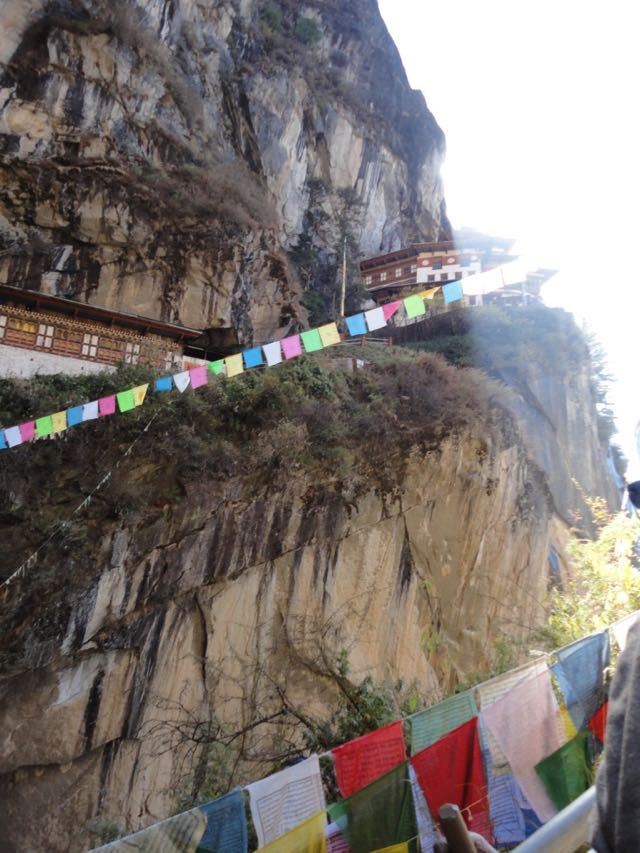 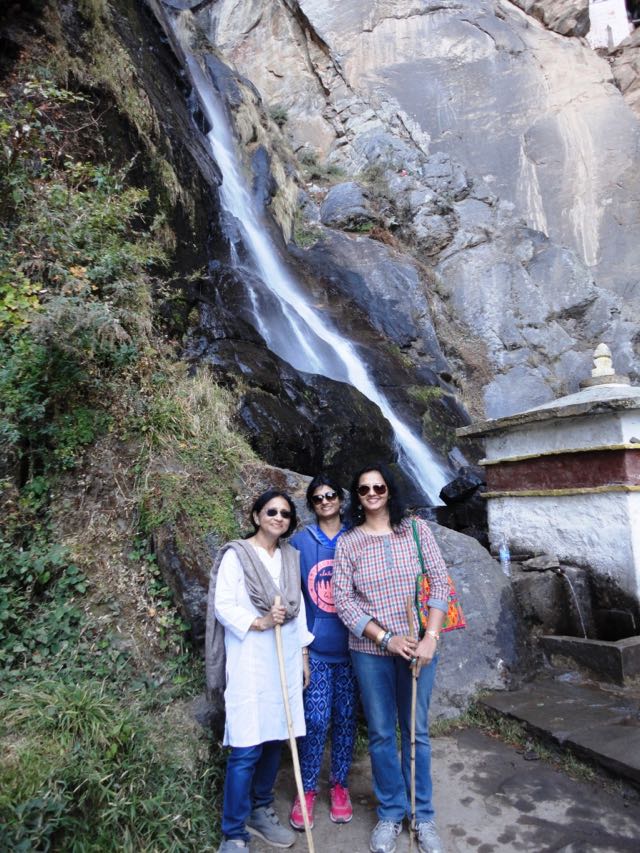 After scaling a series of steps to reach the cave we came down through the same perilous route; it takes a trek of 5 hours to cover the entire stretch both ways although half way through there is a cafeteria and horse stand.

Pilgrims can reach till this point riding on horse backs. It was undeniably a pebbly and slippery journey; there are no concrete roads but naïve mountain trails.

We were really exhausted by the time we descended and reached the end point.

Thus ended our journey to the mystical Bhutan and we headed for New Delhi the next morning. Pic: Peaks from the planeDefined as beauty with serenity Bhutan should be a must see destination for every traveller.

On top of all this it had started drizzling, I still remember the walk. With my phone serving as the music player and torch and the hood of my rucksack as a pseudo rain coat, I walked across the dark pathways hearing distant bell tinging which was coming from nearby farmland. I walked across “cows” and saw “PRIVAT” sign board, and heaved a sigh of relief after meeting the hosts.