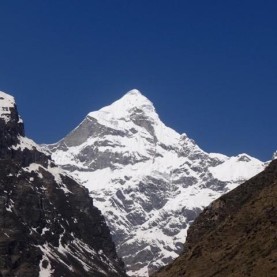 And then it happens. We are warned that it is a really rough patch ahead and to be rowing as hard and fast as we can as we hit it. Before I know it, the rapids are upon us and …. I can see it happening in slow motion… our raft just rises up from the right front end and keeps rising. The two members on the right side fall on us taking all of us under with the raft overturned right on top of us. I tell myself there is no need to panic. The guides are trained and our protective gear is on therefore all I have to do is come up to the surface even if under the raft and breathe from the air pockets under it. Easier said than done. I come up and try to breathe and I can’t. Just swallow some water from my mouth so resolutely, I close my mouth and try to breathe in through my nose. No luck. It is as though the air had suddenly turned solid.

There is a fair amount of traffic on this route… even though it is so demanding a journey. The day is getting brighter and the scenery more compelling. All of a sudden I spot a dog sized something on the corner ahead. Its gait immediately gives its identity away. It is a Himalayan Snowcock. Lo and behold!

Bypassing such quaint villages as Yangthang, Chango and Leo, we press on for Nako. I have great hope that the cloud cover will disperse enough for Reo Purgyal, the highest peak in Himachal to be visible. Unfortunately, the peaks are all shrouded in thick clouds. We have a very long way ahead and no time to tarry. We do not even swing by Nako Lake consoling ourselves that we would see the Chandratal anyway today and hurry ahead. Far, far below us is the meandering Spiti and the beautiful Leo village is visible low down across the valley.
The route takes us through barren, crumbling mountainsides and the presence of a BRO detachment alerts us to the proximity of the Malling Nallah stretch which is infamous for being a perpetual landslide zone. It does not disappoint. We cross the Malling Nallah and come to a halt behind two other vehicles. A JCB is busy clearing an enormous few ton boulder in the landslide while a steady rain of shooting stones continues. It is scary, to say the least. I guess the BRO knows how dangerous it is and has concluded that this is minor enough for the work to continue. Hats off to these sentinels of the roads in these remote areas!

There are flowers blooming everywhere. There are huge swathes of beautiful yellow blooms, more captivating as they seem to be haphazardly flourishing without the predictability of a manicured garden. These are Evening Primrose I am told. They have a lovely mild fragrance… also known for their therapeutic properties. There are profusely flowering wild rose bowers and daisies and many other flowers I know not the names for!

The camp is surrounded by orchards of apples, pears and apricots. In fact, the entire valley seems to be one big orchard. In these idyllic surroundings I wander down to the river to find most of the group already there taking delight in the splendorous sights!

A delicious breakfast complete with a variety of homemade preserves and relishes later, we are all off to Chhitkul, the last village in this valley towards China border.

As we go further, this road climbs higher till it reaches sheer cliffs of stark, unadorned rock where the road is but a scooped out C-shaped tunnel embedded in the vertical cliff side. While we enjoy the drive along the banks of the Sutlej in all its moods, I am almost willing the road to start climbing to this, one of the most celebrated and recognised sections of this route. And when we do hit that stretch, we are all spellbound! Such is the precarious nature of the road that there are precipitous drops on the only open side and encased in solid rock on the other three sides.

A little background on this ‘one of its kind’ festival. The “Bonderam” festival is celebrated on the Island of Divar on the fourth Saturday of August every year. The word “Bonderam” originated from the involvement of flags. “Bandeira” is the Portuguese word for flag. It is stated that during the Portuguese rule in Goa there were frequent disputes between two sections of the Divar village, namely Sao Mathias and Piedade over property issues. These often led to violence and fights in the village. Subsequently, the Portuguese introduced a system of demarcation of boundaries with flags.

Dinner is at a small Rajasthani Dhaba with really yummy food. One thing we have experienced throughout the trip is that the food has been consistently good in the small places and not once have we had any tummy upsets. It just reinforces my belief that one must have what the locals have in the places that they patronise… one really can’t go wrong then.

A little ahead we see the first shop on the track which is basically a place to have some tea, Buran juice (rhododendron juice) which is said to be good for the heart and some bottled water, biscuits and the like. Serves as a little place to catch your breath and soak up the picture perfect surroundings. Henceforth, these small shops pop up at regular intervals. We maintain a steady though slow pace and take very short breathers as we climb so as not to break the rhythm of the climb. Roughly half-way up, we take a longish break of 10 mins where we are treated to another lifer! We see a pair of Collared Grosbeak.