The word ‘Carnival’ evokes visions of a vibrant and glitzy musical and dance extravaganza. The most famous carnival celebrations are the Brazilian and Spanish ones replete with Samba dancers and the groovy Latino music characteristic of this occasion. Well, we are fortunate to have our own Carnival right here in Goa which is arguably as famous as its better known cousins from around the world. The difference being that the ‘Samba Babes’ are replaced with respectably dressed Goan ladies hot stepping it with the spirited local lads to some scintillating and funky music. 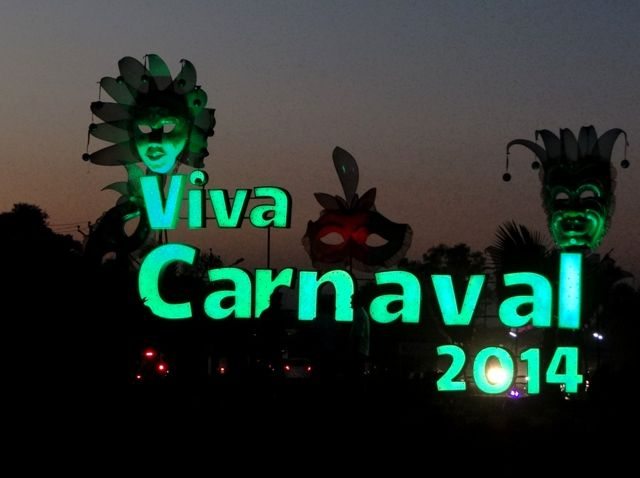 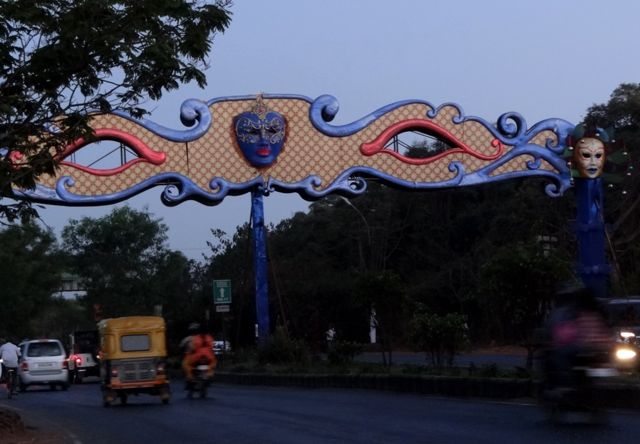 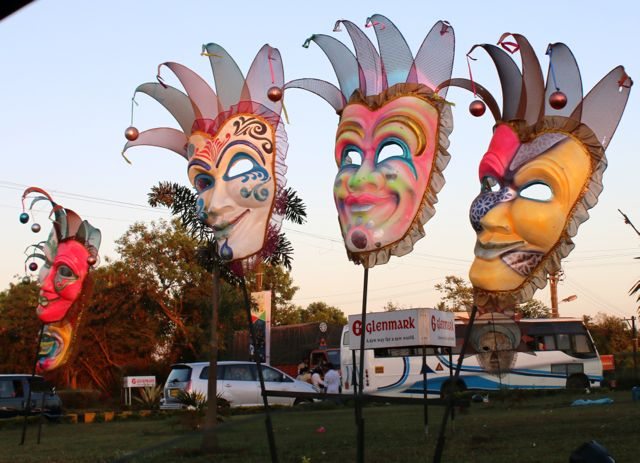 The origins of this pagan celebration seem to go back to the hedonistic feasts of ancient Rome and Greece. It travelled with the Spanish and Portuguese and is celebrated in all the erstwhile Portuguese colonies. Goa is the only place in India which follows this tradition due to the Portuguese influence here during the colonial rule.

Carnival is celebrated just before the period of lent where the followers abstain from any form of hedonistic activity. This big bash starts with the appointment and arrival of King Momo to the capital city of Panjim on Fat Saturday, the eve of Carnival. It’s King Momo who starts the festivities by reading his decree permitting his subjects to have unlimited fun and frolic. King Momo symbolically rules Goa for the four days of carnival.

We cross the River Mandovi by the jam-packed Ferry after parking on the other side since parking is super difficult in Panjim today. As we set foot on the Panjim side, we are swamped by innumerable hawkers selling the brightly coloured masks and head gear that seems to be the rig-of-choice for most tourists and many locals. The funny thing is that I have never seen so many street vendors ever in Goa. They seem to be coming out of the woodwork!! And they are not Goan. Biharis, Gujjus, Rajasthanis, UP ke bhaiiyas and a good mix of south Indians! Talk of national Integration…. it happens here without trying! 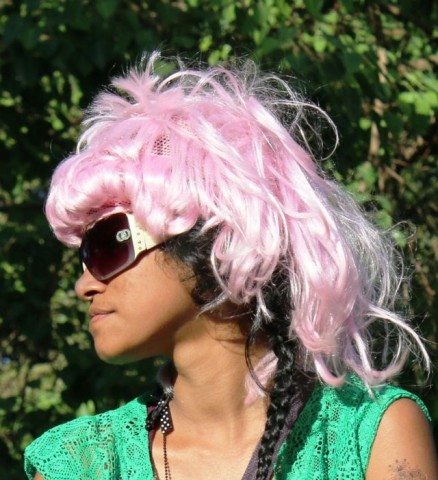 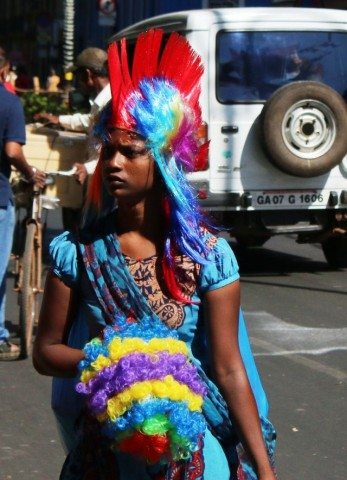 The promenade along the River Mandovi is the place to be since the floats are scheduled to go along this route. There are people everywhere. Many have come hours in advance to get the best and most coveted – shaded – places. Tourists and locals alike are in a state of excitement and waiting for the parade to start is the most difficult part.

The guttural snarl of the Harley Davidsons heralds the beginning of the Gala. The superbikes roar out to thunderous applause as the spectators jostle each other to catch a glimpse of these deafening beasts.

The Harley Davidson rolls out… 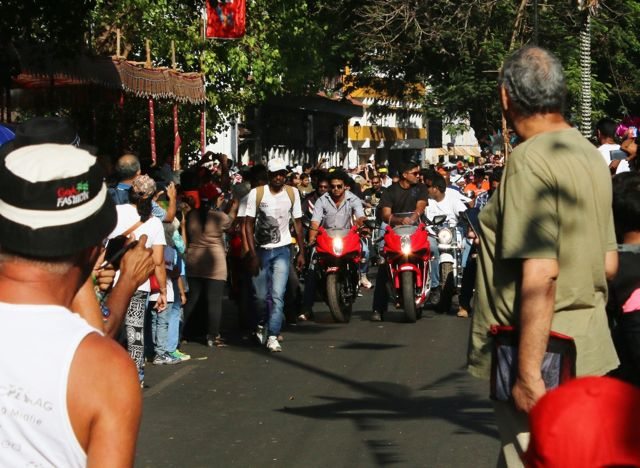 The Indian Navy Band marches past next – all elegance and charm mingled with the spit and polish so inherent in the Defence Forces – to resounding applause. The children of Sunshine Worldwide School precede the King Momo’s Float with a very strong message – Say No to Competition – and all its ills. All the while, the crowd is frantically trying to take in all that is happening around because it is not just these tableaux but a lot of other little things which are piquing the interest of the onlookers… a daredevil cyclist, a young boy on a battery operated ‘scooter’, a ‘Mother Teresa’, a ‘Lion’ and many such accents which keep pouring out to entertain. 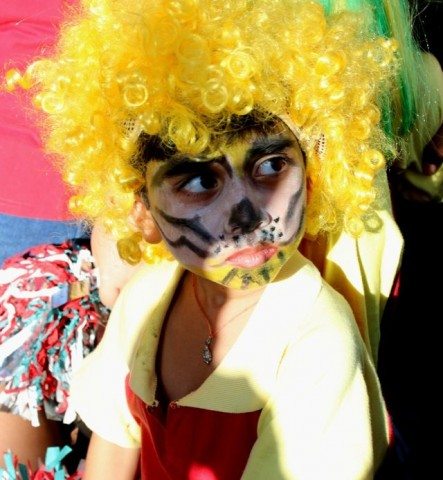 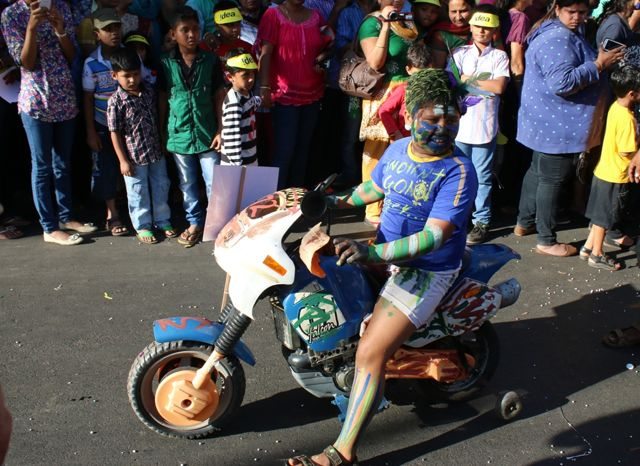 King Momo and his entourage arrive on a Unicorn powered Tableau complete with his very own live band in attendance and an effervescent group of revellers ready to tango to his every command. 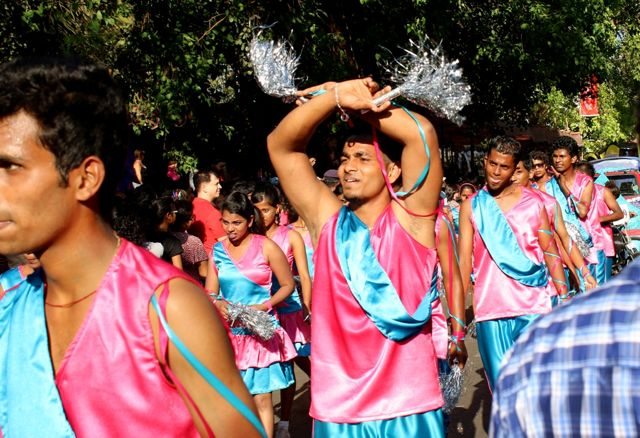 Float follows float with the popular themes being the fisher folk with giant mock-ups of fish and the rural theme with the farmer and his oxen. Another one is of Portuguese influence with the troupes dancing to western beats and the bright colours, frills, bandanas and pompoms reminiscent of European festivities. 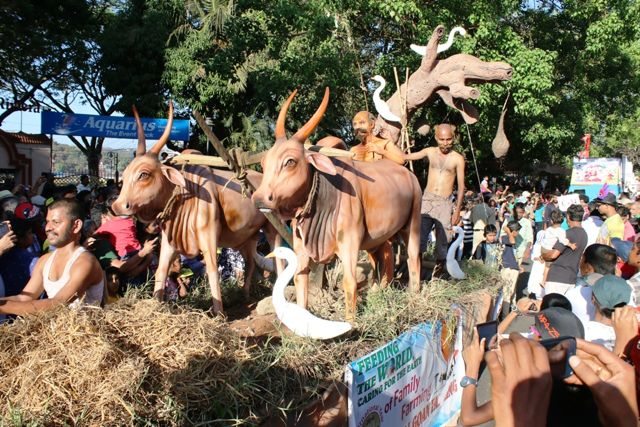 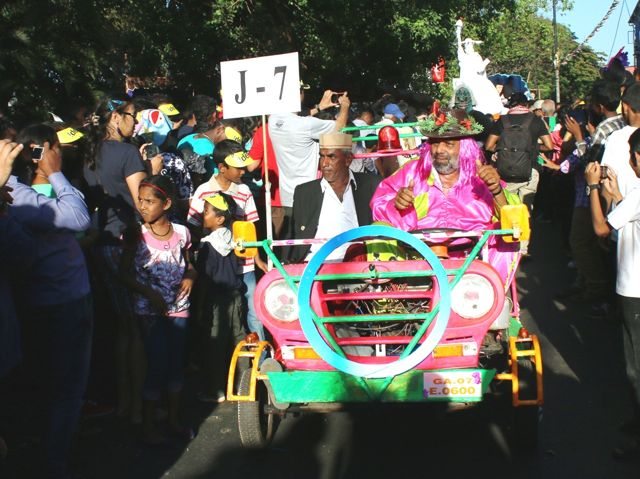 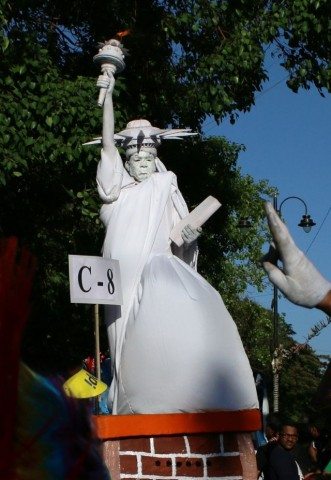 This statue is REAL!! 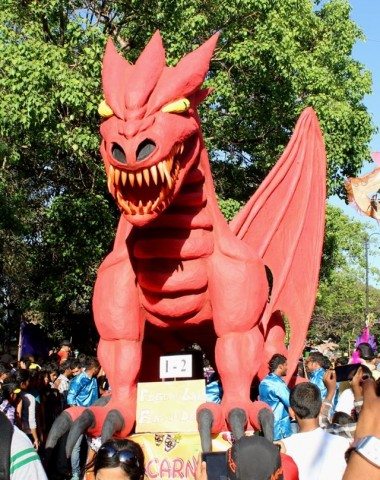 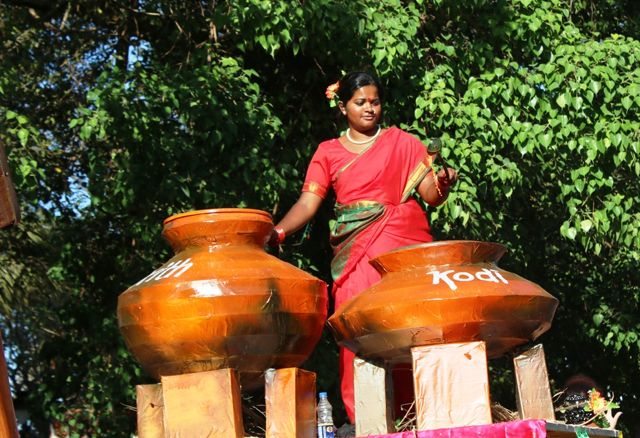 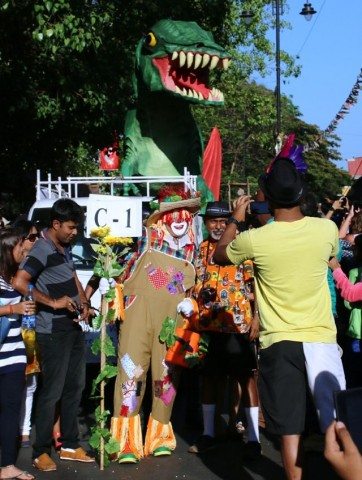 The onlookers getting a piece of the pie… with the Joker

This year, the social message floats also catch the eye with a man sitting on a pot (destruction of environment), our girls our pride and the Save the Ocean’ float. Some even make political statements… ☺ 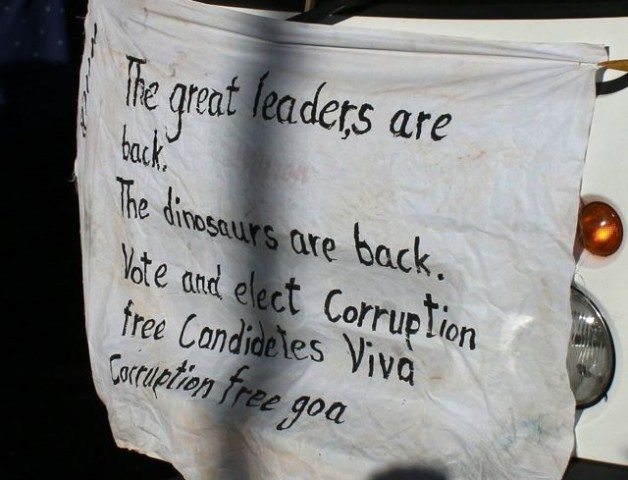 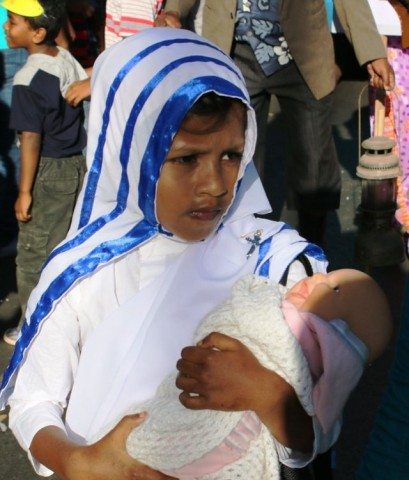 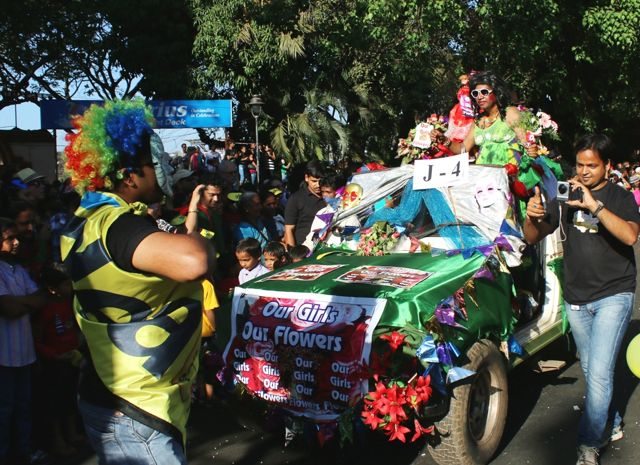 Our Girls, Our Pride

Say NO to Competition

The crowds are still pouring in….. As the multitude swells and the bamboo barricades lining the roadside scream with the crush of humanity bearing down on it, we step away and decide to wrap up our day here. Making our way back to the jetty, we board the next ferry and are back to the saner bank of this River Mandovi. 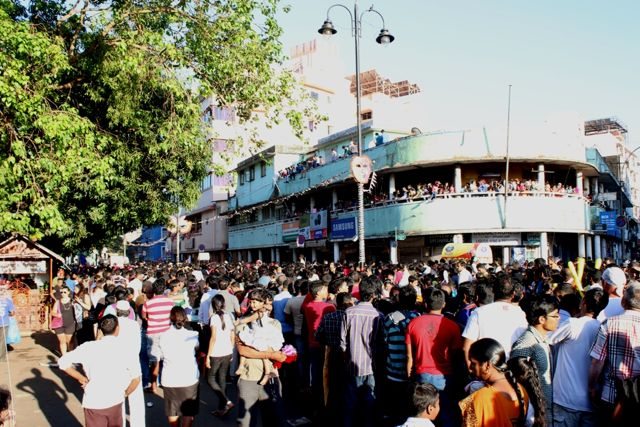 The crowds at the parade

Our way back is punctuated with stops to frame the beautiful Carnival decorations along the many circles and roads leading to Panjim. Not as famous as the Rio Carnival perhaps, but delightful and exuberant it is!!