18 Jul 2014. At the crack of dawn I am out trying to check if the weather has turned for the better. It is still drizzling but there is a brightness about the morning which is making me more optimistic. We are going to do Chandratal today either on foot or hopefully, if the access is cleared, by road.

A walk around the guesthouse produces a few very tame Hill Pigeons (with the white band on their tails as opposed to our common Blue Rock Pigeons), some Common Rosefinches and Eurasian Goldfinches. A surprising sighting is House Sparrows! At an altitude of 4000 mtrs, I do not expect them but there they are… and fairly abundant at that!

One Scorpio has gone ahead at 0600 hrs on a recce trip of sorts and we are expected to catch up at Kunzum top to go together from there. The roads are nothing to write home about but the scenery changes soon as we start the ascent for Kunzumla. The extremely dry and barren mountains give way to a slightly more moist landscape. The Spiti basin narrows as we go closer to the river’s origin at Kunzumla but the valley with shades of pink, beige, grey and dappled with the white of the stones strewn randomly around the grassy green mountainside makes a striking picture! 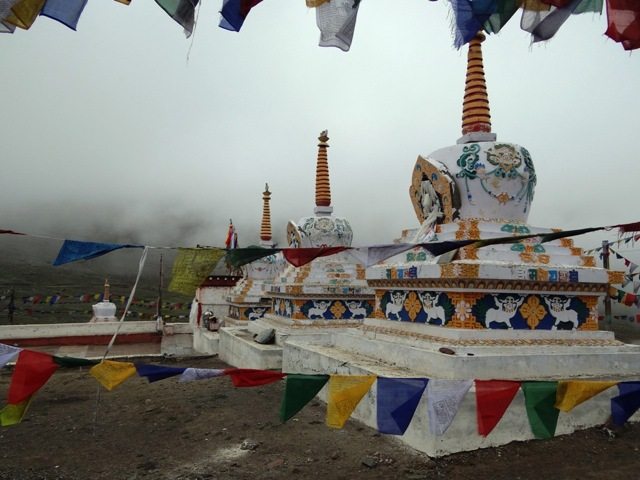 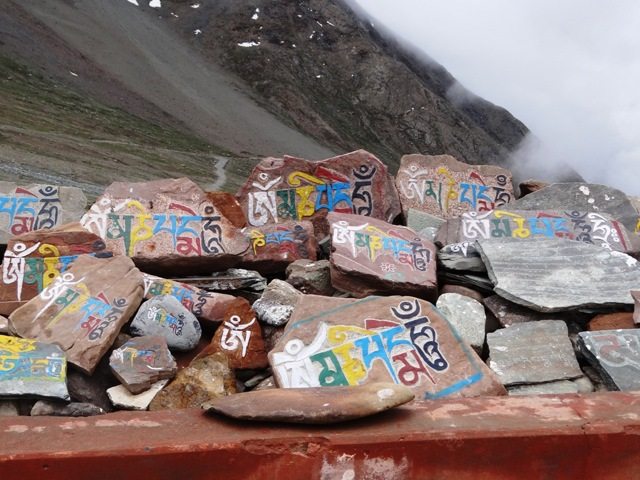 By then it is almost noon. The road down towards Batal is perilous with a steep down slope and the clouds coming onto the roads reducing visibility drastically. 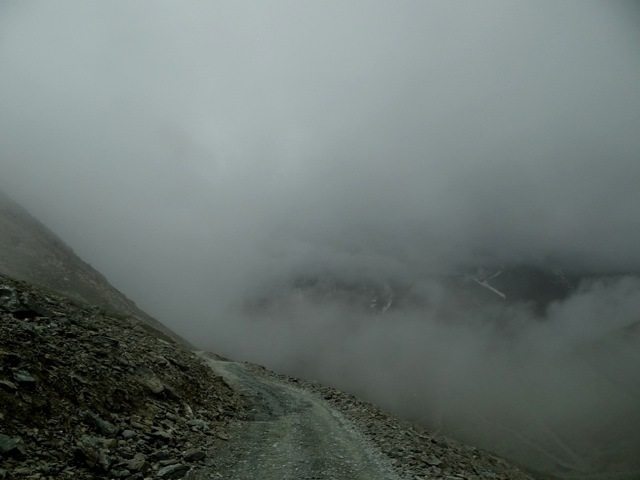 In due course, we come to the turnoff for Chandratal. Turning in we wonder if the road has been cleared!!?? Yesterday’s news from some travellers on this route was that they had seen clearance work on but not completed and therefore the road was not open. This route hugs the scree clad mountainside with the Chandra River for company on its left. No trees, no bushes and the tallest plant is not more than 6 inches high.

Life blooms even in these barren stretches!

With a lot of optimism we crawl along the drivable but rough and bumpy road. Within 6-7 kms we come to a halt behind the advance vehicles parked at a point where the road is wide enough. 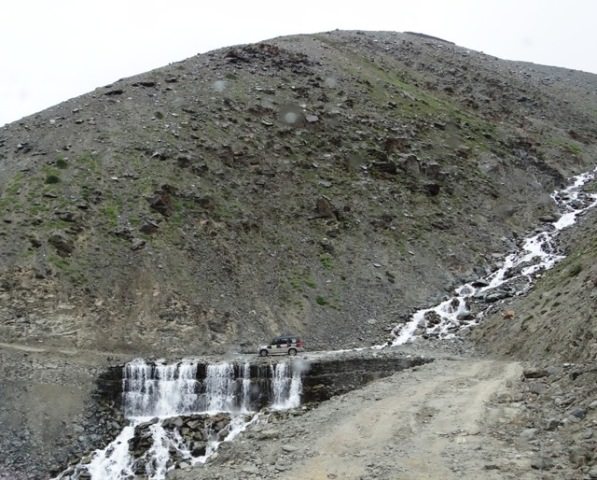 Up ahead in the distance we see a JCB working to clear what seems like the last blocked patch and information is that it would take a couple of hours at the most after which we could drive in. We would be the first vehicles to drive in this season to Chandratal.

The parking spot seems to be a vantage point to capture the splendour of the Chandra valley. The clouds obscure the mountains on the far side revealing only their lower elevations with the tail end of glaciers tumbling into small streams joining the Chandra. The wide riverbed with numerous glistening silver streams snaking through presents a stunning picture. By and by, the sun comes back out, though the cloud cover does not completely let go its territory. The brilliance of the sun adds an indescribable vividness to the landscape. Instantly, all is well with the world!

Rally vehicles…. the three Scorpios and the Bolero 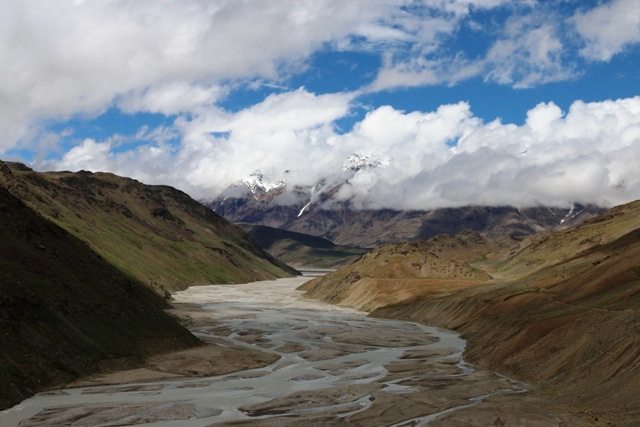 As time wears on, some of us start a game of ‘pitthu’. I don’t think too many people can claim to have played in such heavenly environs! 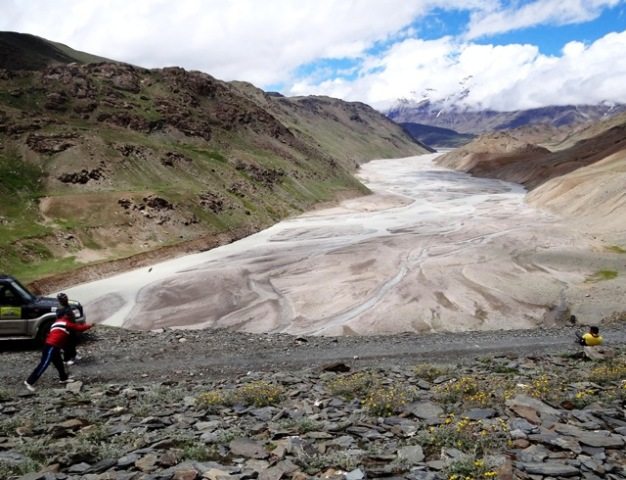 A game of Pitthu while the road gets cleared

The road is cleared and everyone piles into the vehicles. The last bit of road before we hit our camp is a drive on a furrowed glacier/stream bed, the glacier long since melted leaving deep grooves which we negotiate across with much heaving of vehicles and churning of the gravel under.

The camp is a collection of multicoloured tents set in a square. Some of our party who have walked into camp before the road was cleared has alerted the camp hands of our imminent arrival and the requirement for lunch. A simple but delicious lunch of dal, chawal and gobi aalu subji later, we are all ready to hit Chandratal. It is still 3-4 Kms further away. 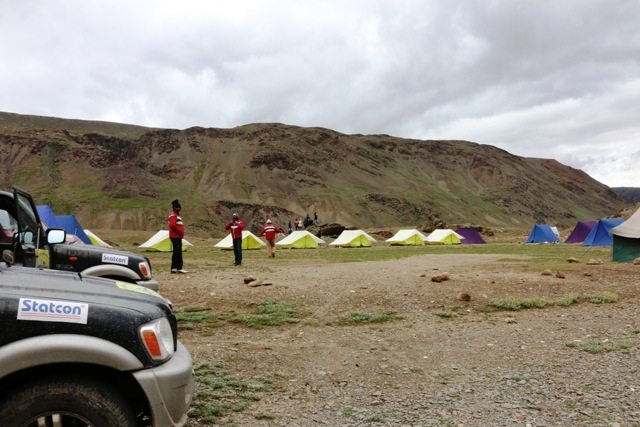 Our campsite at Chandratal

The drive over the last 2-3 Kms is a nightmare! There IS no road. It is just a deeply grooved path with boulders liberally scattered on it. At many bends, the vehicle comes up against the hillside before completing the turn, has to be reversed before the wheezing engine forces it forward. Even though the Scorpio is well capable of traversing such terrain, it is a nail biting ride.

We reach the parking area from where one has to walk about 500 mtrs on undulating land to reach the Lake. A biting wind hits us as soon as we step out of the Scorpio. It is cold and I wrap myself up in another layer leaving me feeling more than unwieldy! But I have to if I hope to keep even reasonably comfortable.
Trudging up from the parking area, the lake is not yet visible. A few Brandt’s and Common Mountainfinches with Horned Larks flit around.

Instead of taking the well worn bridle path I make for the highest point to try and catch a glimpse of the lake. It is still some distance away, not yet visible… a few more undulations between us and the lake! Still further as I crest the next hillock, I stand spellbound! It is a magical setting. 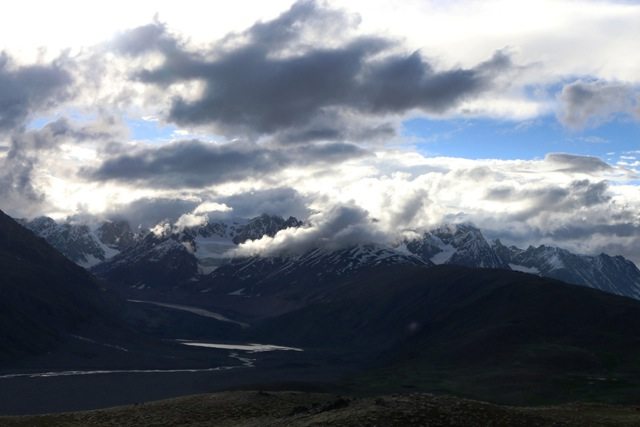 The glacier visible from Chandratal

Menacing, craggy mountains make the eastern boundary running towards the north like an impenetrable guard. In the west is the Chandra valley bounded by looming mountains most of which are veiled by clouds and a gargantuan glacier visible easily even from where I stand! Closer towards the west is a tiny lake and further north are high altitude marshes. And nestled amidst this splendour, are the clear blue waters of Chandratal. No wonder legends abound that this is the ‘Lake of the Gods’. The lake is longish running north – south. The smooth pinkish brown mountainsides on the eastern margin of the lake are unique. The clear waters show the stones and pebbles underneath clearly. The mountains around are still under a thick veil and there is a steady drizzle going but seeing the intensity of the wind, I have hopes it will clear to some extent.

There are breeding pairs of Lesser Sand Plovers and Brahmany Shelducks and a distant Tern which I am unable to Id. Some horses are gambolling around near the marshes and the mini lake. The sun does come out yet again for just a bit and the clouds recede somewhat to reveal a glorious picture. The light blue waters have instantly taken on a much deeper hue and there are tantalising glimpses of the snowy upper reaches of the mountains around while the ones bounding the south are revealed in their radiant whites.

I feel smitten by this place almost as if I have been lured here by unseen forces and trapped by an expert magician… After the initial frenzy of click, click, click I just sit on a rock at a high vantage point and soak in the atmosphere of the place. No words that I know and no pictures I can ever hope to capture can truly encapsulate the essence of this place. My partner is busy taking pictures. I just sit there in solitude…

The light fading and the wind now penetrating all my layered clothing making my teeth chatter drives me back to the parking. The rest of the group has long gone and is probably wondering where the two of us are. There is a camp right next to the parking where we discover the entire group huddled into the small kitchen tent yakking and generally having a whale of a time. We too join them. It has been decided that we will have dinner here and then go back to our camp. The camp owner also promises a campfire which is enthusiastically received by us.

An enjoyable dinner and dancing round the campfire later, we are ready to roll. Looking up at the sky, I am amazed to see zillions of stars twinkling down at me. I make up my mind to try and capture some star trails back at camp. Alas, it is not to be since the weather being what it is in these regions, the clouds are back to reclaim their territory leaving me crestfallen!

The night does not end without some more drama. We are the second vehicle going down to camp and intermittently keep sighting the headlights of the lead vehicle as it winds its way down the hillside. It then overshoots the dark campsite and continues on the road to Batal without realising it. We wonder where they are as we turn into camp because they should have reached first. As the remaining two vehicles also might overshoot, we switch on the blinkers to get their attention. Long story short, one vehicle ends up going in search before the lead vehicle is found returning (sheepishly)! How they turned around is miraculous because the road is so very narrow….but all’s well that ends well!

After all this excitement, we hit the sack!
The journey continues…

Road to Chandratal was last modified: December 23rd, 2021 by Naturebuff