20 Jul 2014: Early morning in Sarchu is even colder. I have had a bit of a cold and uncomfortable night. Uncomfortable, not due to any uneasiness or discomfort due to altitude but more owing to the freezing conditions.

The idea today is to start at the crack of dawn and take in Tso Kar before heading out to Leh. It is just a 30 min detour one way and that is very doable if we pace ourselves well. Our campsite is at Nimmu, further out of Leh but that is fine. Nimmu is just a little over 30 kms ahead of Leh. The road conditions in Ladakh are expected to be really good and the passage that much faster.

We leave Sarchu at 0530 hrs. It is the crack of dawn…. the place is overcast and there is a bit of a drizzle. The wind is howling, it is snowing in the higher elevations of the surrounding mountains and I am chilled to the bone!

Right after we set out, we cross a little bridge which I am told is the boundary between Ladakh and Himachal. So now officially, we enter Ladakh! A little bit further we come across this signboard… the BRO has already been spreading the AIDS awareness message…! 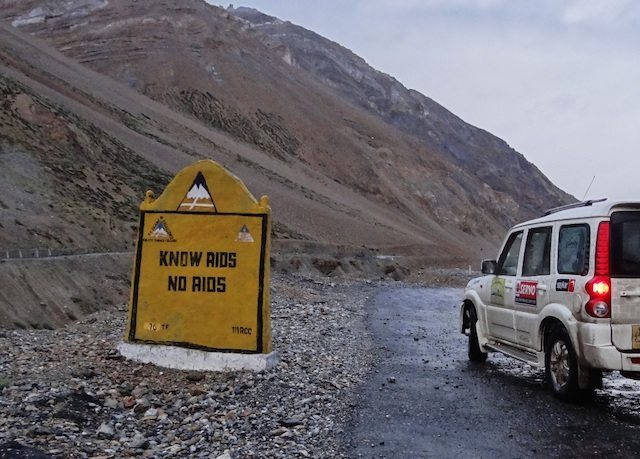 Looks like the BRO has already been spreading the message…

Driving along with the Tsarap Chu on our left, we reach the Gata Loops… starting at about 4200 mtrs altitude. This is a series of 21 hair pin bends before we hit the Nakila at 4739 mtrs. All along, the peaks seem to have a sprinkling of fresh snow on them… just as if they were some giant muffins with a drizzle of icing sugar on top! Very beautiful! 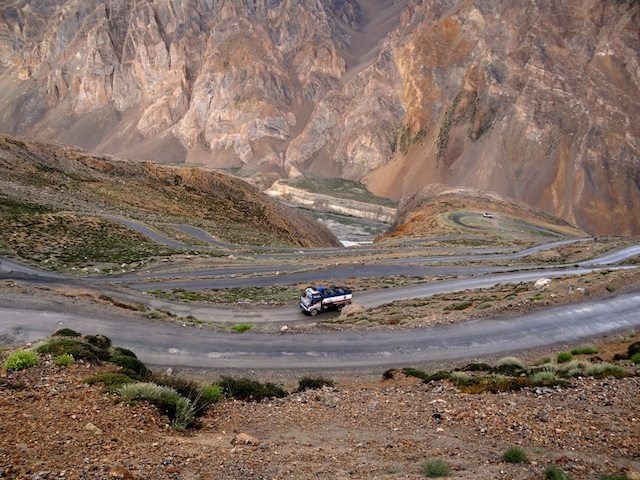 There is a fair amount of traffic on this route… even though it is so demanding a journey. The day is getting brighter and the scenery more compelling. All of a sudden I spot a dog sized something on the corner ahead. Its gait immediately gives its identity away. It is a Himalayan Snowcock. Lo and behold! There are two more right behind it and our Scorpio comes to a screeching halt. The moment we stop (with squealing tyres) and rush to get to our cameras, they scramble up the mountainside giving us precious little time to get in a few clicks. It is then that I realise that there is a fourth one too! Am I happy!! A brilliant start to the day indeed! 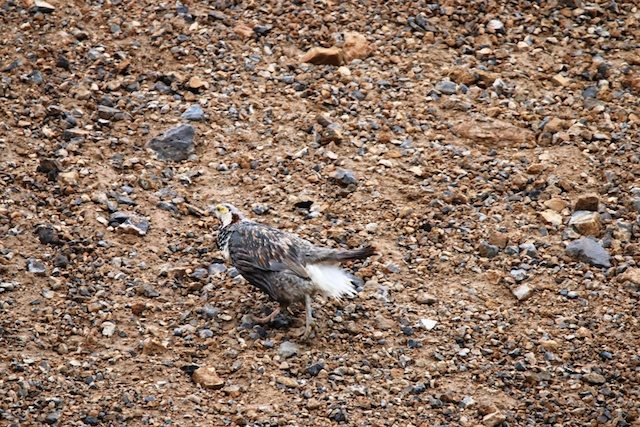 Lachulungla at over 5000 mtrs is cold and windy and we move ahead to Pang. It is very different from what I had imagined it to be. I had expected a couple of dhabas but this is like walking on Main Street…. at about 4700 mtrs! There are at least 7-8 dhabas each, on either side of the road catering to the hungry, sleepy, out-of-fuel or just a tired traveller. Imagine, a collection of 15 odd dhabas looks like ‘Main Street’ after driving in these remote areas!!! Gives an idea of how sparse and patchy the habitation is in these regions.

A quintessential breakfast of maggi and tea later, we are off. The road loops up high over Pang giving a panoramic view of the settlement there from above as well as the valley of the Lachung River with those typically distinct geological formations in the valley, the result of high velocity winds in the area.

Lachulungla.. with a sprinkling of fresh snow 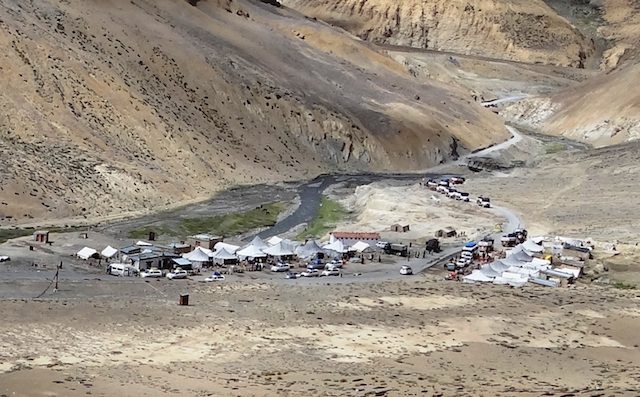 Close up of Pang 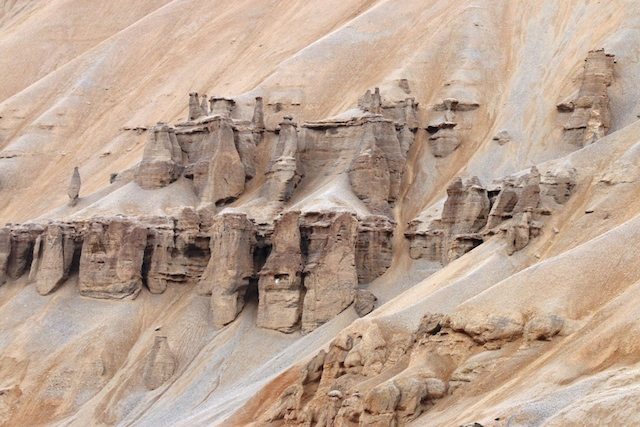 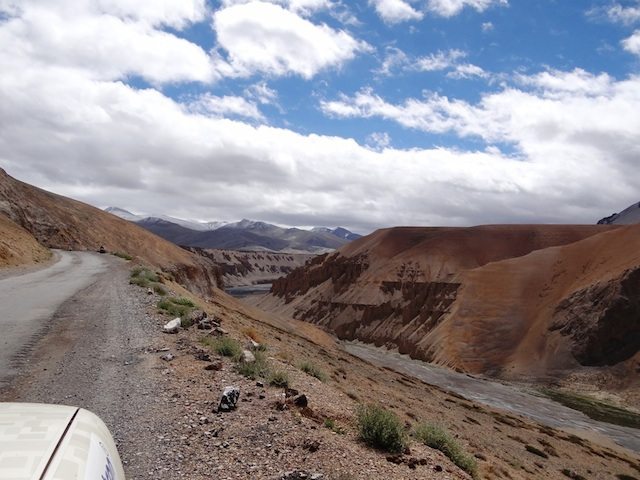 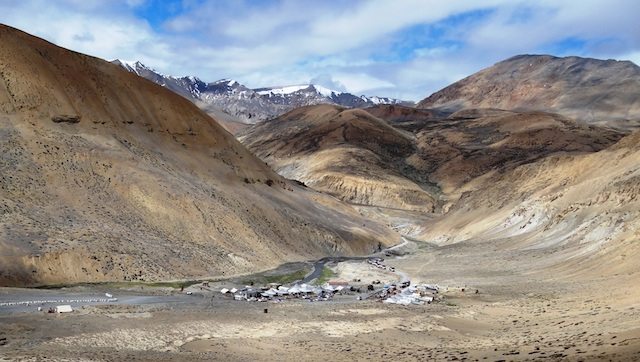 Pang, from the road above… 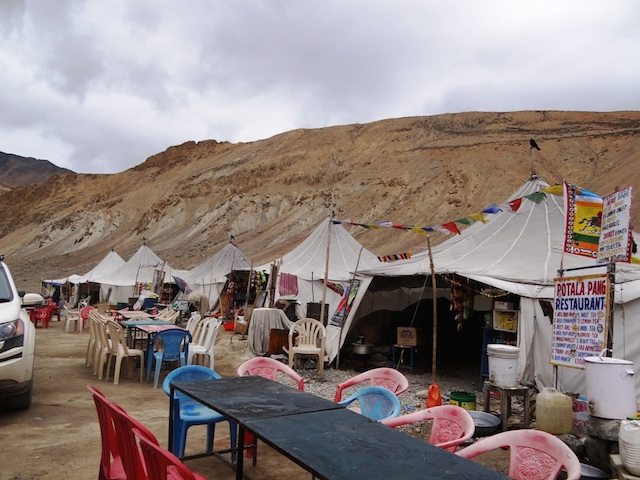 The tented camp dorm-beds in Pang

Moving ahead we come to the famed Morey Plains. A vast area of flat land surrounded by mountains… with Kiang (Wild Asses) grazing lazily in small probably family groups and loads of little birds foraging around the roadsides as well as the small clumps of grasses around. These plains are high altitude semi-desert plains at just under 4800 mtrs and part of the Tibetan plateau kind of habitat. The flora and fauna here also exemplifies this fact. Tibetan Larks, Horned Larks, Twite, Great Rosefinch, Tibetan Snowfinch… 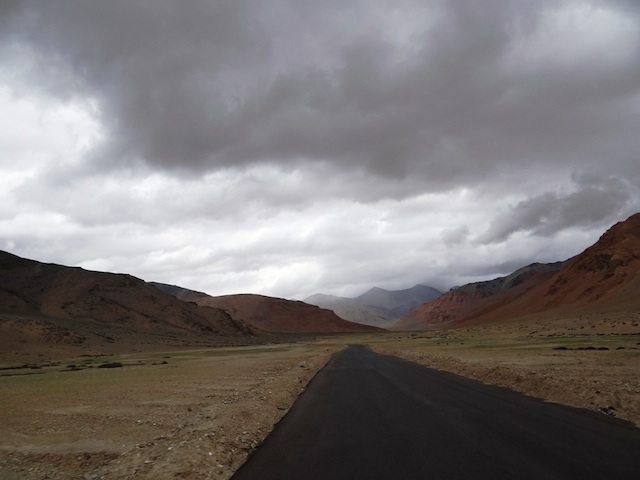 Driving through the Morey plains 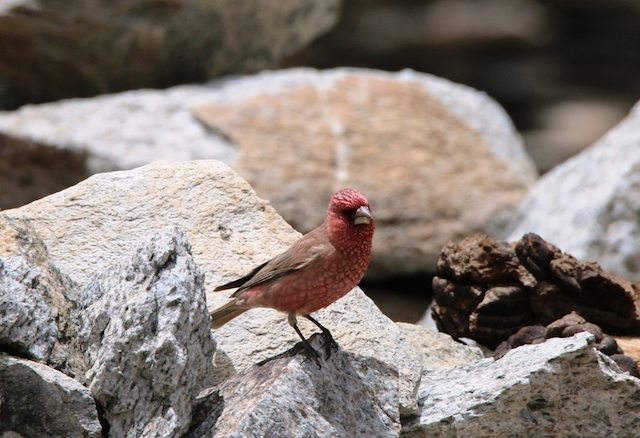 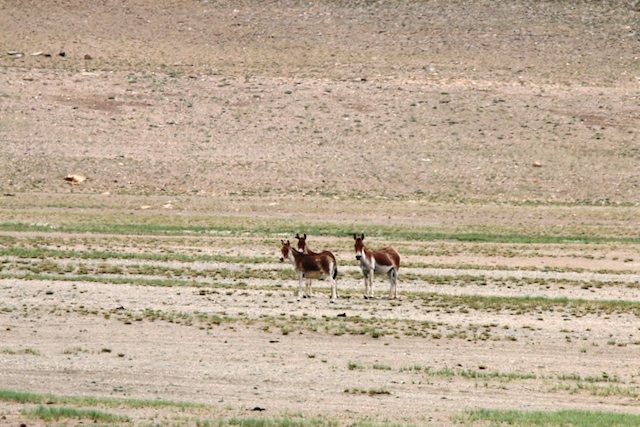 Kiang…. at the More plains 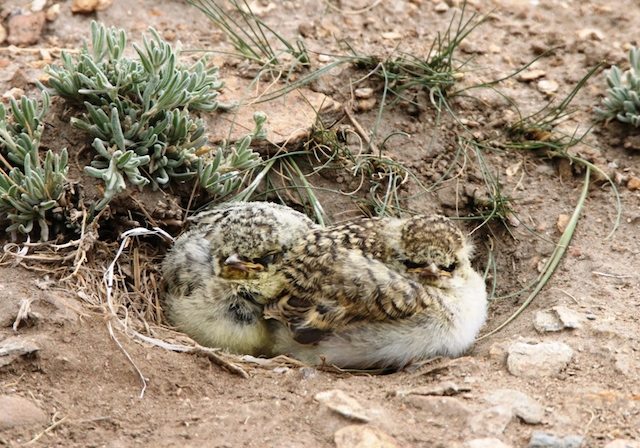 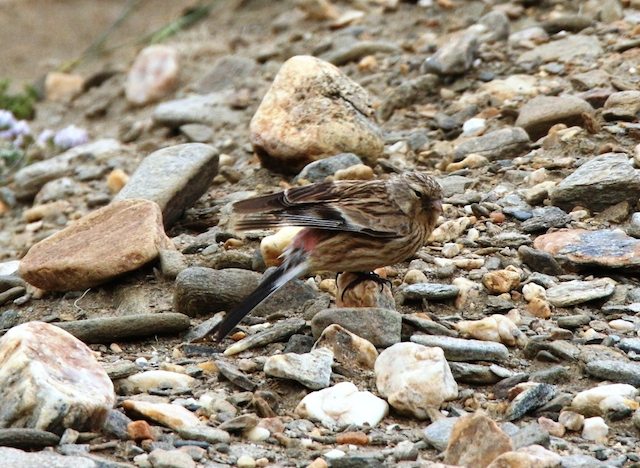 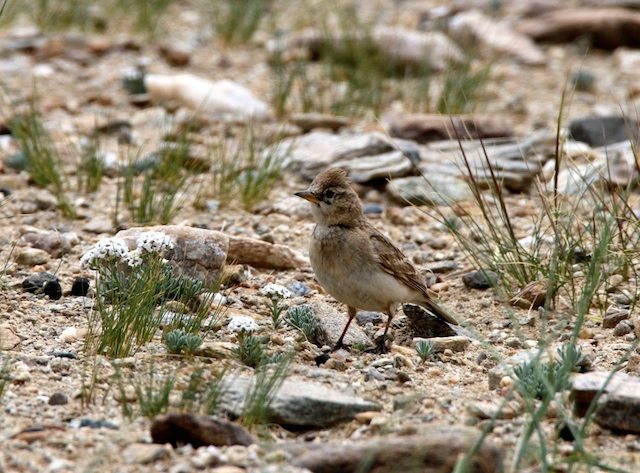 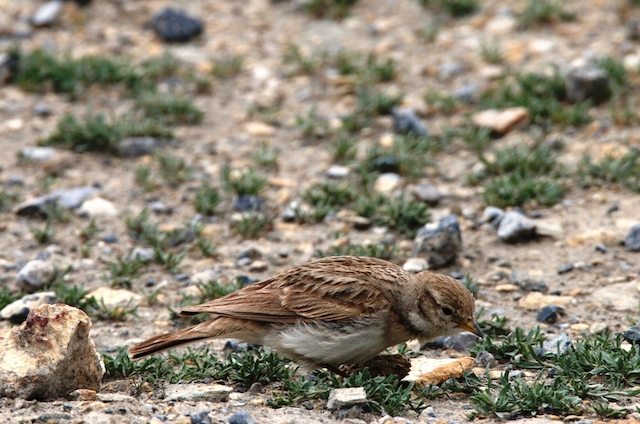 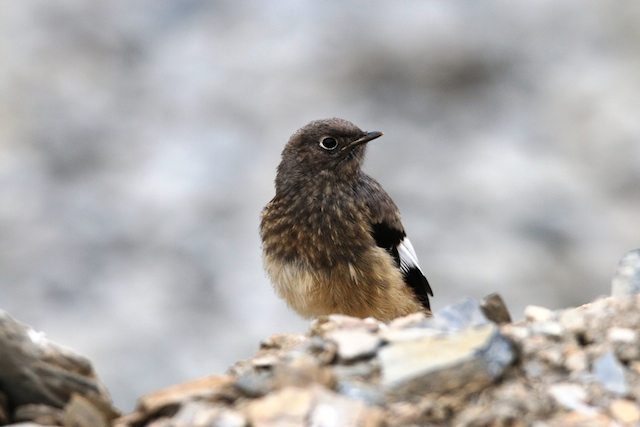 The fabulous road through the Morey plains ends at a place just short of Debring. A minor road branches off to the right taking us towards Tso Kar. Though a rough and narrow road, it is easy going on it. A half hours worth of drive brings us within sight of the lake.

Tso Kar is a salt water lake and salt deposits are visible along the lake margins. This is one of the numerous lakes dotting the south east part of Ladakh. It is a breeding ground for the Common Redshank, Brahmany Shelduck, the Bar-headed Geese and the most sought after avifauna here – the Black necked Crane. The latter is a critically endangered species of which there are estimated to be just 200 to 300 left in the world.

We are lucky to spot a Black necked Crane right upon entering the lake area and even before the little settlement of Thukje. There are marshes around the lake which are the favoured habitat of these handsome birds. For me, this entire trip has been worth it just to see these beautiful creatures…

The sandy soil at the edge of the lake is very soft and the vehicles are sinking appreciably driving on it. There are sand banks a little way inside the lake where we spot some Common Redshanks and Lesser Sand Plovers in breeding plumage. To the right, are a flock of Brahmany Shelducks. All around in the small scrubby patches of grasses around are Tibetan Larks, Tibetan Snowfinches, Twites and a lone Desert Wheatear. Near the settlement there is a stony retaining wall on which we spot the Little Owl. Very cute! 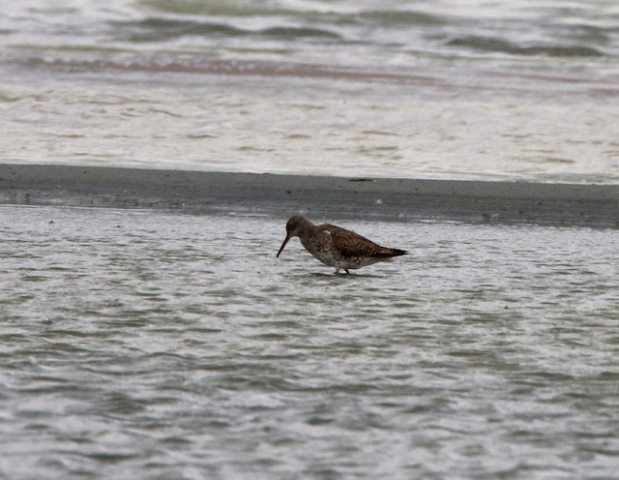 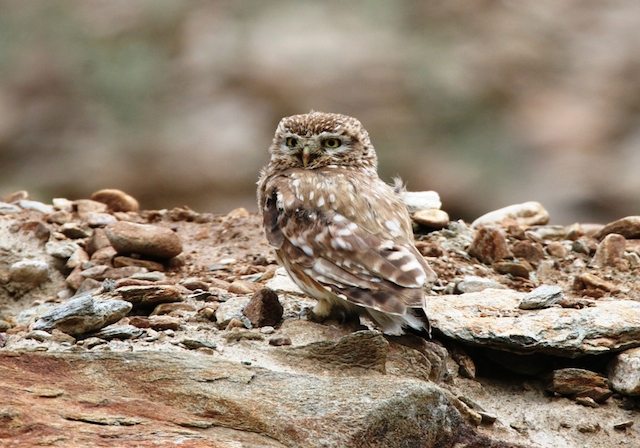 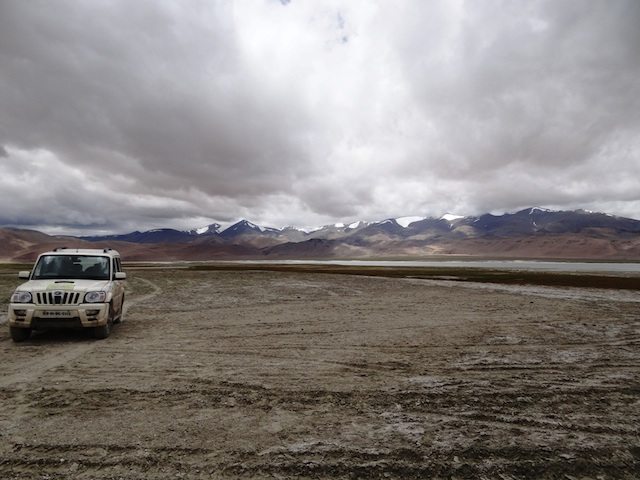 There is very little visible in the way of accommodation here. There are a couple of tented camps near Pongunagu right at the point one first sees the lake. Since it is a day trip for us, we do not check out any stay options. After spending a half hour there, we head back towards Debring and the main highway.

The roads are very good most of the way today except for the detour to the lake though one can’t really call it bad. The area around Debring is dotted with the tents of the nomads (the Changpas) spaced well apart though loosely congregated within say shouting distance of each other with the sheared wool from their livestock (sheep) lying outside all along in this region. Either they are doing well for themselves or it is the monetary help extended from the government that enables the presence of an SUV outside each tent we see! 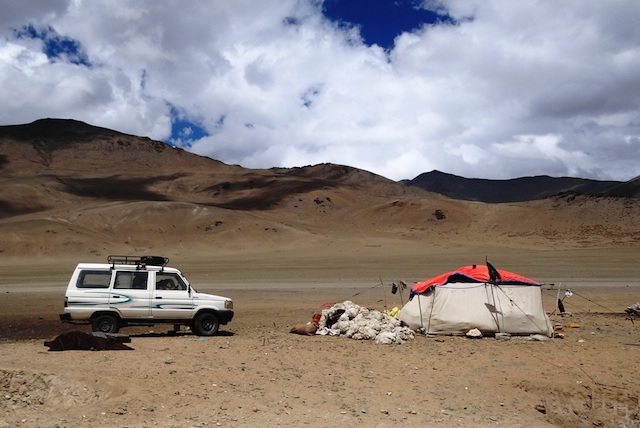 A lone tent of one of the Changpas

The road slowly ascends in wide loops. Right at the very distant top, we cross the famous Thanglangla, the second highest pass in the world at over 5300 mtrs. The views from here are superlative… 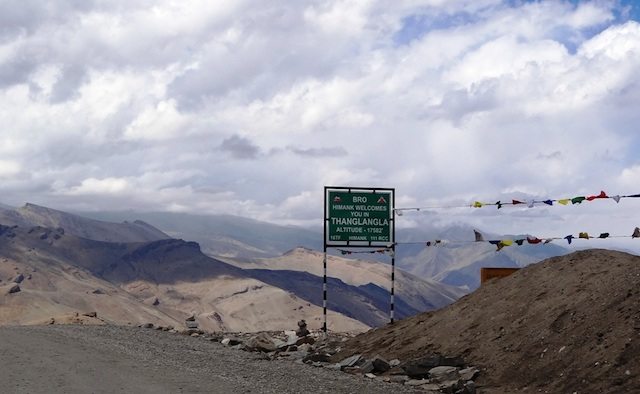 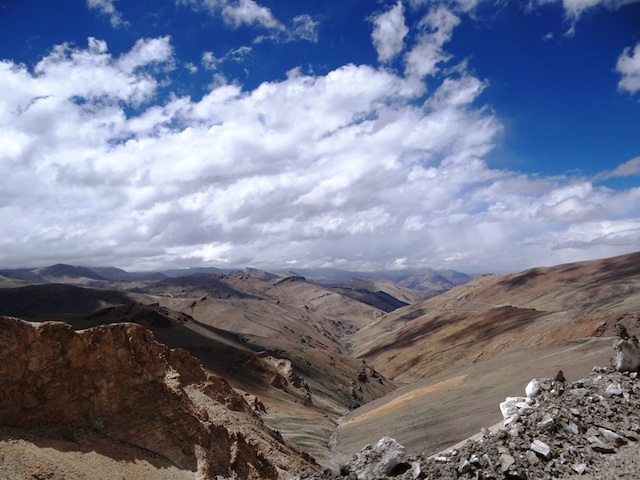 View from almost the top of Tanglangla

As we drive towards Upshi and Leh, we pass Rumtse with tiny fields all bright yellow and vibrant green alongside the pristine blue of the river. There are chortens on the wayside and the landscape changes colour at regular intervals. Right about here there is a startling change as the mountains aroud take on a vinaceous hue! 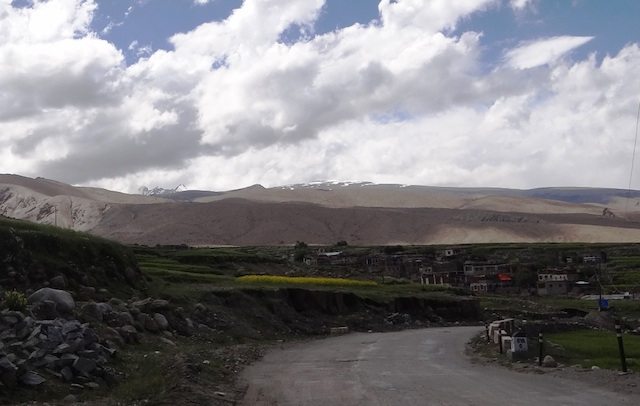 Vibrant yellow fields along the way at Rumtse 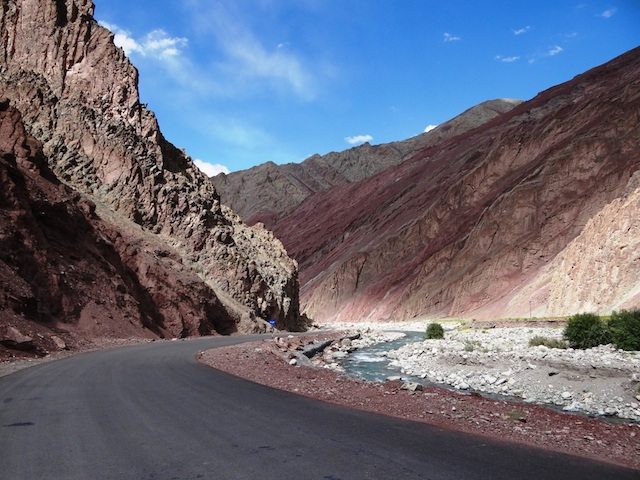 Changing colours of the landscape

At Karu we turn towards the Hemis Gompa for the benefit of our fellow passengers. We have done this trip (to Leh) before and seen the monastery. We spend the time birdwatching around the Gompa. A treat it is! 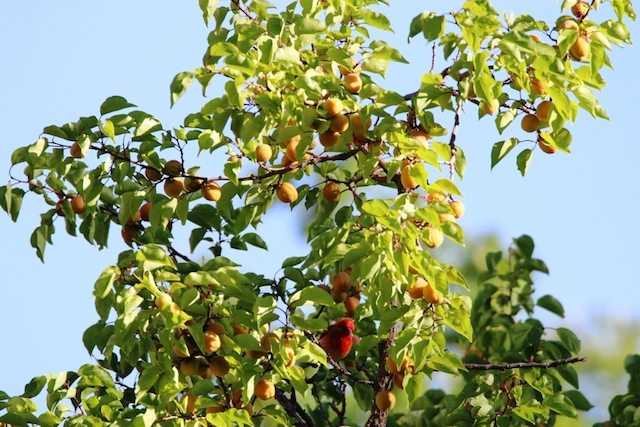 A Common Rosefinch on the Chuli tree (bottom center!) 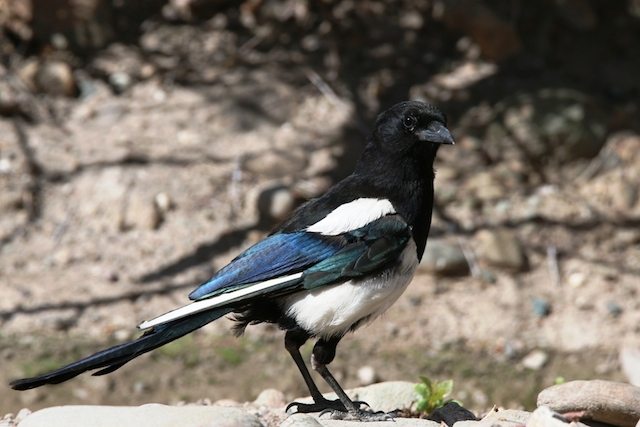 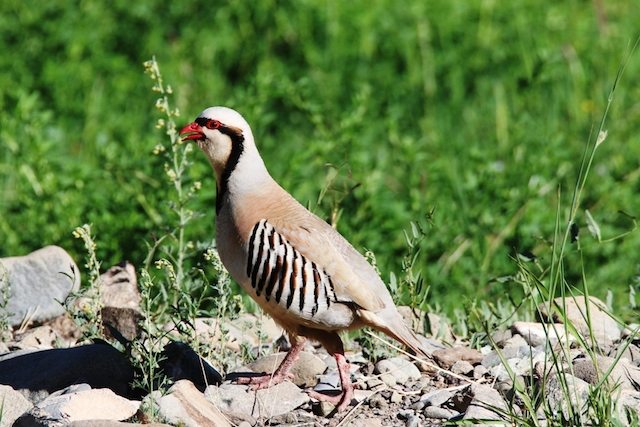 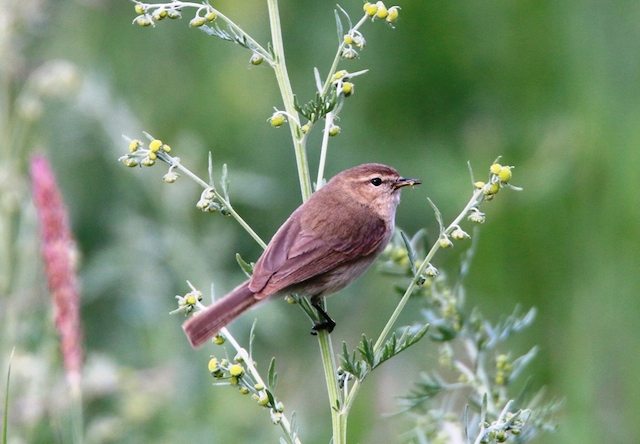 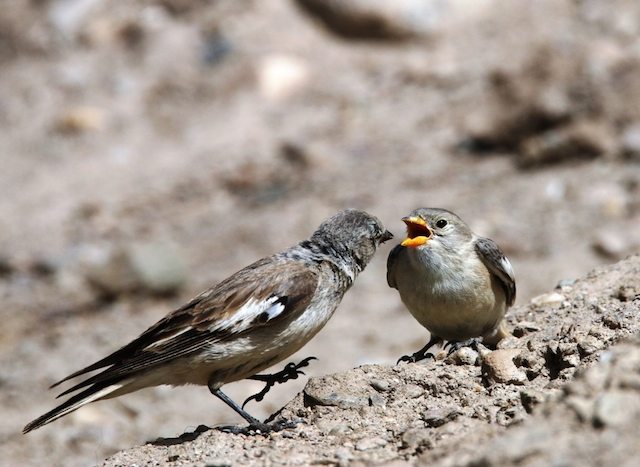 It is getting dark and we move out towards Leh. I look forward to seeing the Stakna Gompa even from a distance since I totally love the setting it is at. Much photographed, it looks mysterious, enticing, austere yet vibrant all at the same time! 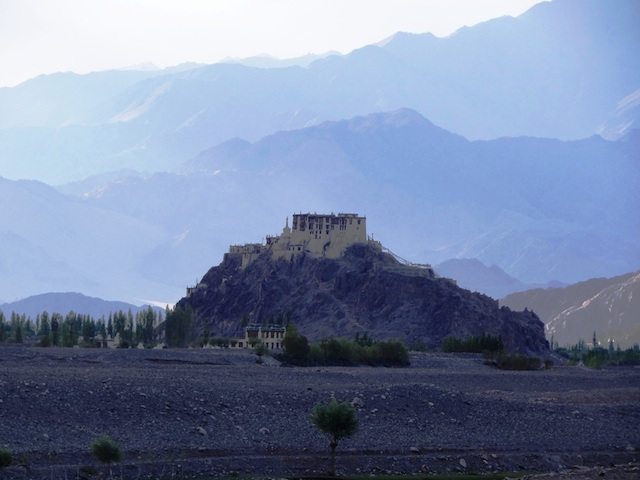 The much photographed Stakna Gompa

This is definitely one of the most scenic routes I have ever driven on… all the way from Shimla, through Kinnaur, Spiti, Lahaul and now Ladakh! I feel blessed to witness such beauty firsthand!

We drive through the outskirts of Leh and go towards Nimmu on the other side. Enroute we stop at the Gurudwara Patthar Sahib and the Magnetic Hill, regroup with one of our other vehicles and then proceed to our campsite. It is after dark by the time we reach our camp. The gush of the Indus is heard in our tents since we are right at the river’s edge. A campfire set up at the riverside is beckoning. A sumptuous dinner later we hit the sack!

Sarchu to Nimmu – taking in the famous Tso Kar was last modified: December 29th, 2021 by Naturebuff

This is an account from last year when I was still in Bangalore, and those were the days. Our vibrant theatre group, which was…