Driving on a road in bright daylight and driving at night is like chalk and cheese. This time, the drive from camp through Sangla to reach the main highway near Karcham doesn’t feel nearly as bad nor the roads quite as hazardous. Hitting the highway, we turn right towards Pooh. The road is superb and we are delighted! Doesn’t last for more than a couple of kilometres though. Yet again, we find ourselves on rubble paths, the road having been swept away by the slides or at places the river. 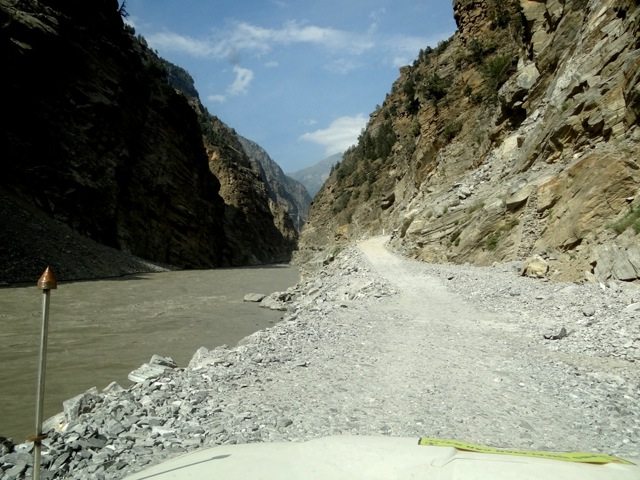 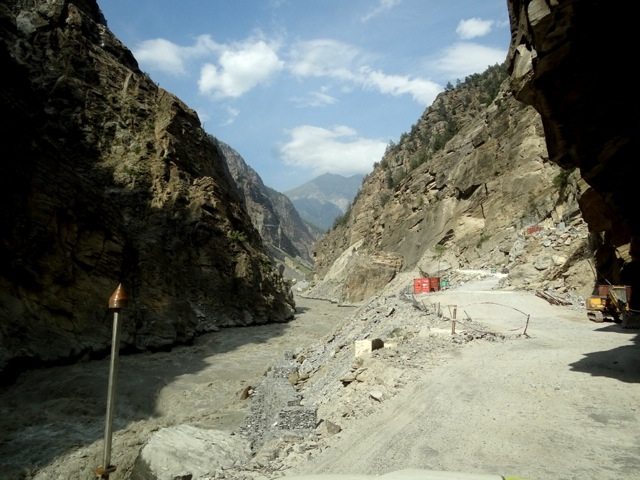 Time is short and I know we do not have the luxury of taking the detour to Recong Peo from where one can see the Kinner Kailash peak. I wonder whether it would be visible from the highway itself… even if just a wee bit, without going to Recong Peo. I am finally resigned to the fact that it’ll have to keep for another time…

A JCB followed by a few vehicles in queue ahead probably means some sort of road block. We see nothing. Wondering what the matter is, we wait and within seconds it is apparent that the vehicles have been stopped due to shooting stones. Some are pretty large and cause other debris to slide down as well. BRO is everywhere and at work within minutes wherever required. The Scorpio has been an able companion through this journey especially over the more undulating and bumpy stretches. It has given me a lot of confidence that at least the vehicle is more than capable of taking any kind of road in its stride. 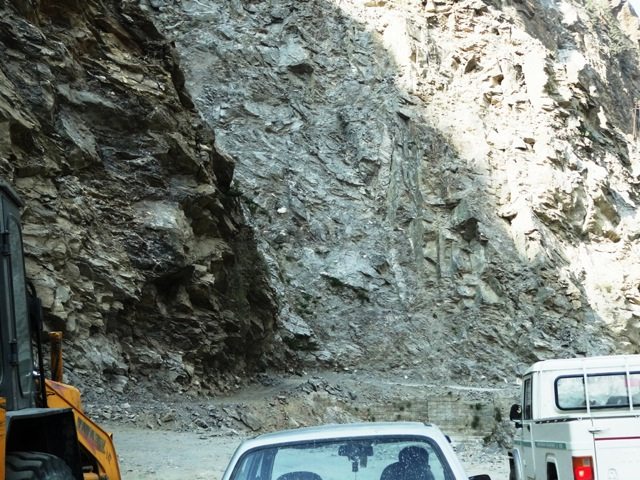 Shooting stones from the mountain force the traffic to a halt

Pangi Nallah turns out to be this enormous cascading torrent of water. Nothing could have prepared me for this… I know that a much recommended ‘waterfall’ is along this route (it turns out to be almost a river the water from which is pitching and swelling across the enormous boulders in its steep path, not a ‘waterfall’) but the sheer size and scale of this nallah! Words fail me in describing it. I’ll let the pictures do the talking! 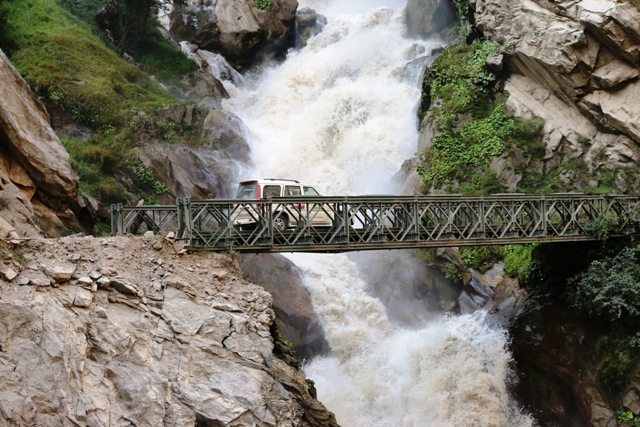 Pangi Nallah. The spray from it reaches well over 10 metres! 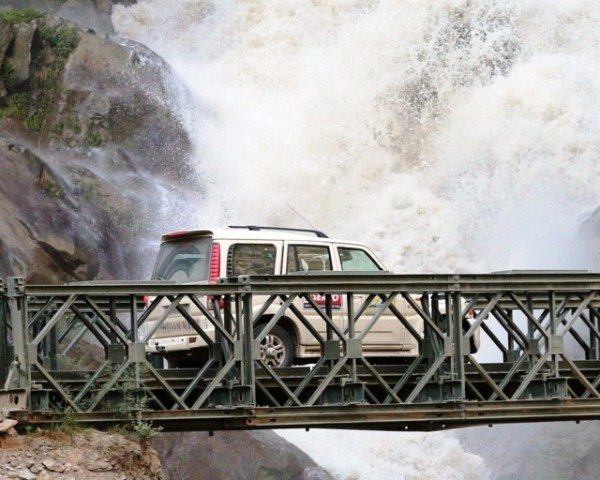 The enormity of the gushing Pangi Nallah

Our photo ops here come at a price… we are almost wet from the spray off the cascade. We cross the Sutlej again to now drive along the left bank and come upon the ‘Most treacherous road in the world’ signboard. Pictures are taken for keepsakes and we are off again.

The greenery from the Baspa valley has all but disappeared. The vegetation is getting sparser and more stunted. There are the famous Kinnauri orchards in some places where there is a water source but otherwise it is just some scrub and Chilgoza trees.

We cross the Sutlej yet again over a quaint old wooden plank bridge near Akpa. On this entire route from Sangla, we seem to have criss-crossed the river half a dozen times. 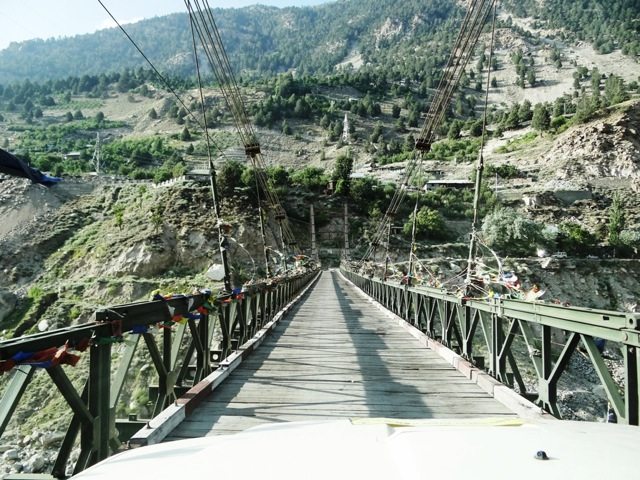 The valley is often very narrow and there are plenty of places where it is just a gorge with straight walls on either side. To top it, the soil is very loose and quite unstable, prone to come crashing down without warning. No wonder this stretch of the NH 22 is so vulnerable to landslides 24×7, 365 days a year! It seems like a miracle that the BRO has managed to carve out a road alignment in these steep and nearly vertical mountainsides and keep it open for vehicular traffic virtually all year round. 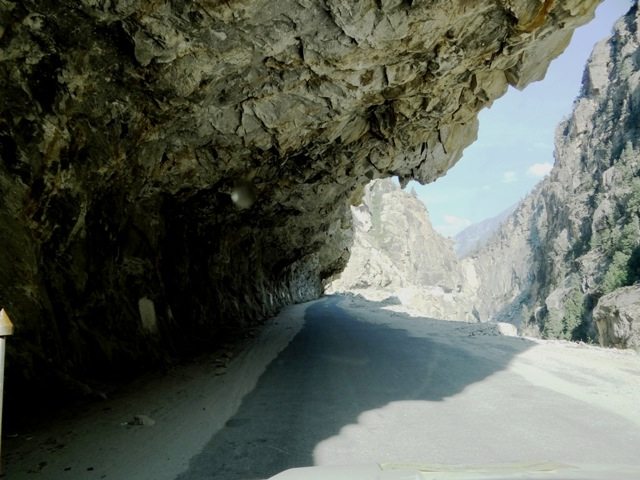 Roads carved out of the mountainside

We come upon a group of bicyclists after Akpa for the first time. There have been a few motorcycle riders on and off. In fact even a large group of 32 from Pune doing the Spiti, Leh, Srinagar and Jammu circuit. These are foreigners and middle aged to senior citizens. Very motivating to see people do these routes on … a bicycle! 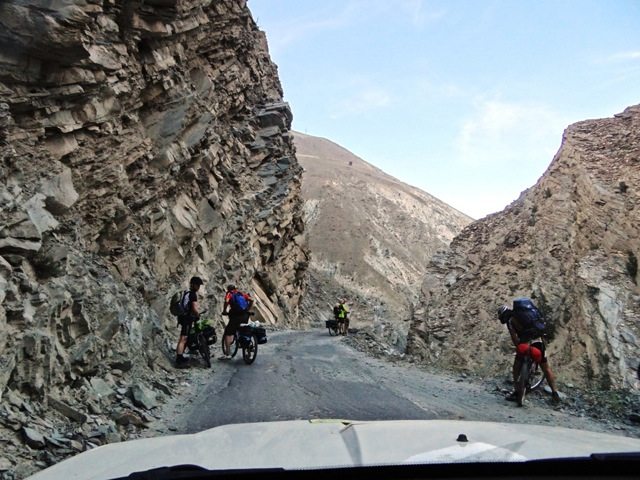 A group of German cyclists giving way to the vehicular traffic

Right here while they are giving way to us, I notice the stratified rocks on the mountain side of the road which seem as if someone has cut through a puff pastry, folded and lifted it up at an angle and set it out for everyone to see. This is a good place to see why ‘fold mountains’ are called that. 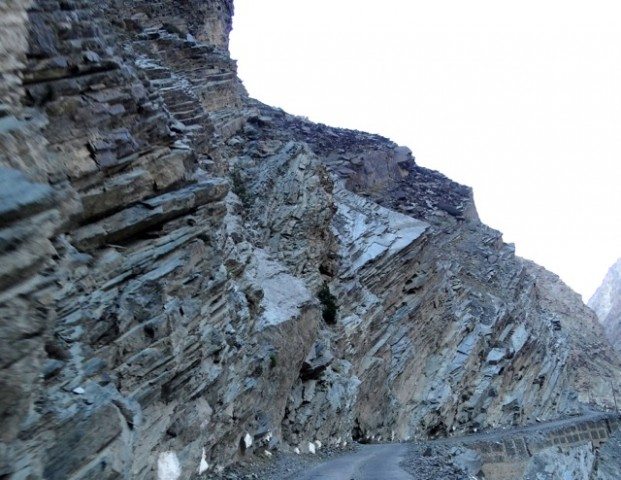 Stratified rocks exposed on the NH 22

The milestone says Pooh 3 Km yet there is absolutely no sight nor sign of any habitation. And then suddenly round the corner is Pooh. A small settlement with pretty multicoloured houses halfway up the mountainsides. We take the road leading up and finally reach our destination just before dusk. Two vehicles have reached and we await the other two. The third one also comes along and I wonder why the fourth one is so behind since this group is one of the quickest on road. When they land up we come to know there has been a breakdown. It is fortuitous that the breakdown happens right at the gates of the guest house…

It is a major breakdown. The next morning one vehicle has to be despatched to Recong Peo to get the mechanics from the Mahindra service centre (also to ensure that they come without any delay). This means we have an unscheduled extra day here. No problem at all! I welcome the break since we have been travelling every single day from Goa till Pooh and most days have been very long. 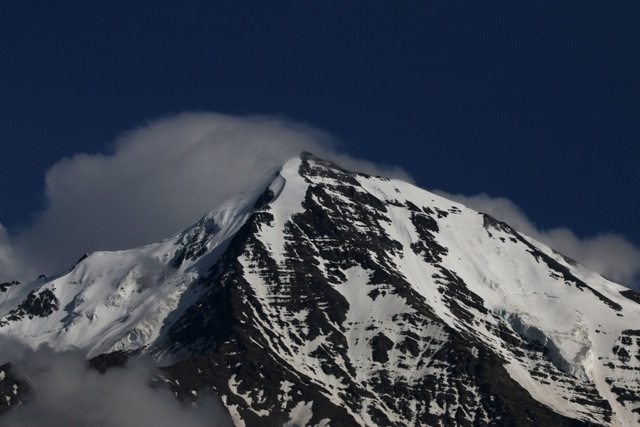 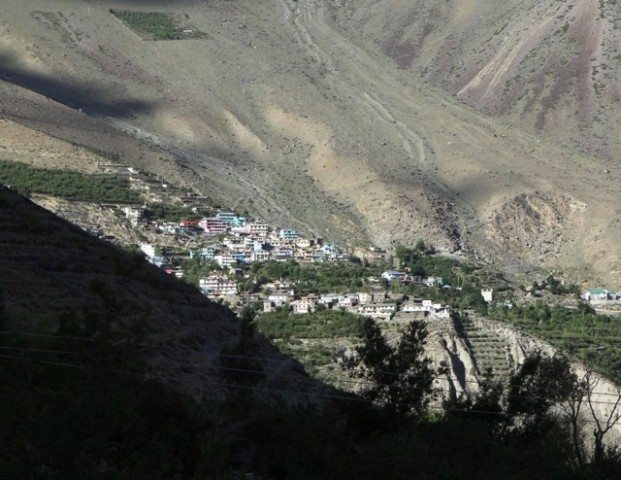 The enforced break is utilised in taking long walks around the place. It was clear last evening when we drove in but this morning it is very overcast. Clouds have veiled the top half of the mountains and the sky making the day very gloomy. All round our guest rooms are apple, almond and apricot trees. In fact, the only fruit that is ripe is apricot with the others still quite small. Never in my entire life have I had such juicy and sweet Apricots and Chulis (another variety of apricots)! It is a veritable feast for the senses! Wish I could bottle this sweetness and freshness and juiciness…. I wish!!

Chulli… a kind of Apricot 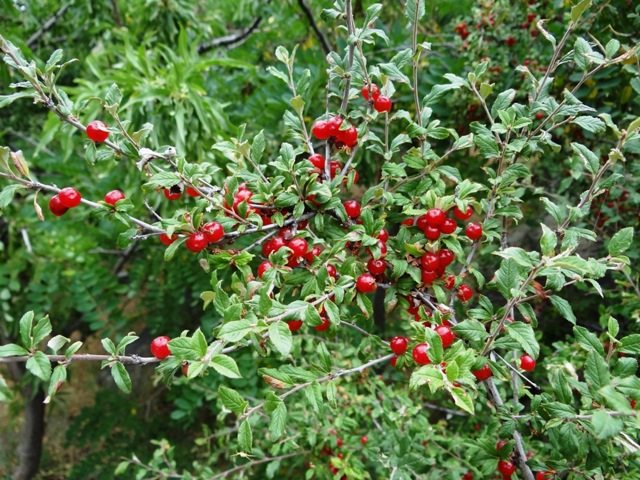 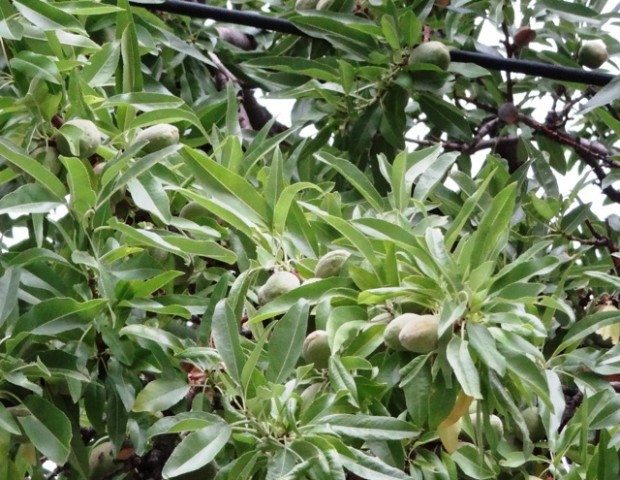 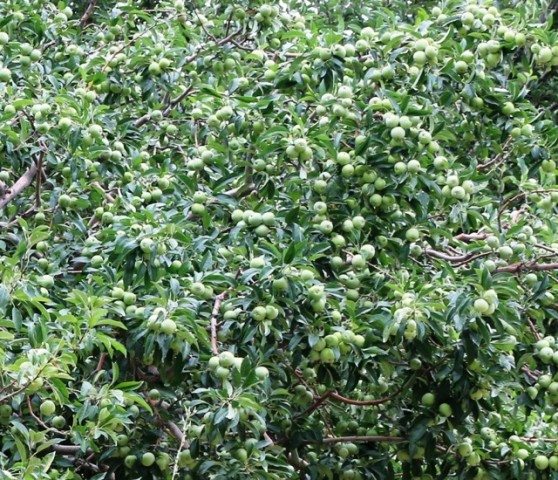 The profusion of apples on the tree…

Late afternoon, the sun starts peeking through and we are out with our cameras in the hope of seeing some birds. We are not disappointed. A lifer for me, we see the White capped Buntings and the regular Streaked Laughingthrushes and Sparrows and the Long tailed Shrike. In our wanderings, we trample some grasses which let out an amazing fragrance. We wonder what the smell is since it is familiar but elusive. This makes my partner start smelling every grass and bush and plant we cross. The place is a treasure… we realise that the grass is the Shahi Jeera and a lot of the other weed-like plants are Dhoop. Almost every bit of the naturally occurring flora there is aromatic. How very amazing, a place where very little grows and is considered barren but for the orchards which are irrigated from the Tinku nallah and the Chilgoza which grow on the steep inaccessible hillsides, there is so much wealth in the plant life… 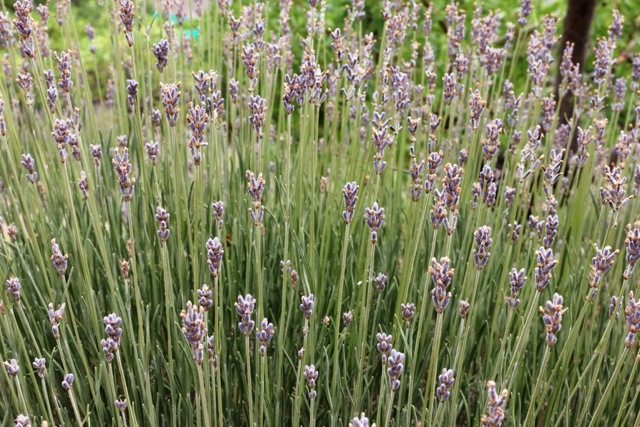 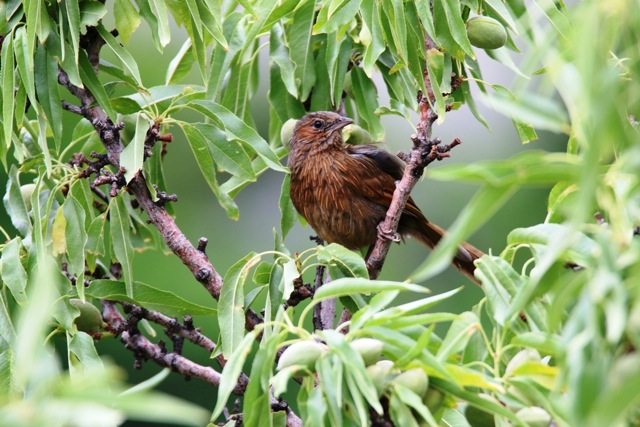 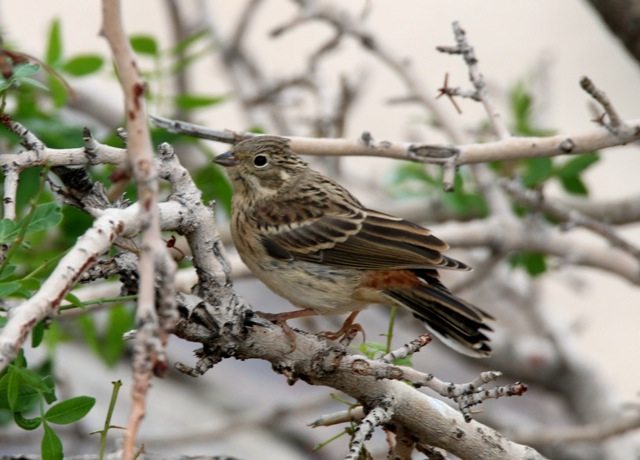 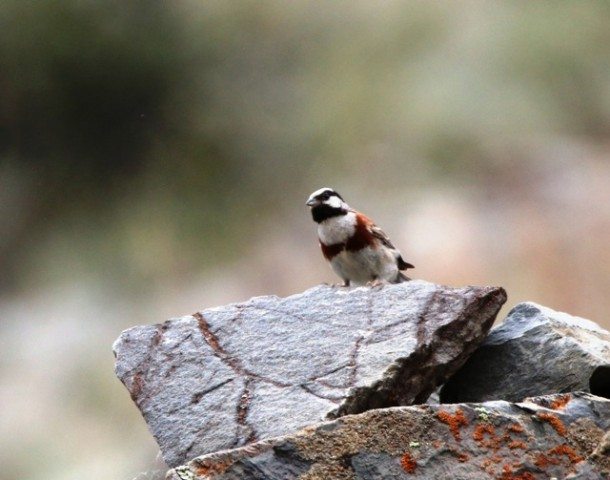 The mechanics have started work by late afternoon and will hopefully manage to repair the Scorpio before morning. We are hoping that we can set off really early tomorrow for Chandratal. We have had to cut out Kaza and head straight for Chandratal to make up for the lost day. This means a marathon day of driving and an 8 Km trek at the end starting at 4550 m and ending at 4200m to the lake since the motorable route is still closed.

Today our plan was to take a cultural tour of London – it involved a visit to Trafalgar Square, the National Gallery & Buckingham…