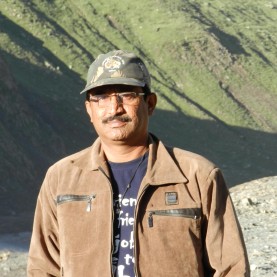 I was ready with my camera, wiped the lens twice, removed the gloves and positioned myself stood high on the rear seat resting my back properly. Looking around with extra vigil eyes for more than 10 minutes discovered no sign of any big cat. Relaxed and confirmed of my hard luck again I reclined my stiff body to the iron bars of the gypsy and lazily looked at a pair of peacocks marching past close to our gypsy.

Khirsu is also situated at 1700 m but much cooler than Lansdowne because the entire hamlet is surrounded by high hills and dense forest bearing tall pine, deodar & oak. It is perhaps one of the most pristine places in Uttrakhand. Less visited hence no touristy activities. No mall road, no shopping or eating joints and no spirit shop. Yet, very impressive, naturally wild and ideal for a laid back holiday in divine serenity.

Hastily, I tried to book some GMVN asset but in vain, with no rooms in either of the two properties available. We therefore, decided to reach early & search for alternate options. Being familiar with the roads & alternate routes, we soon reached at Monty’s Dhaba at Miranpur via Mawana as early as 9 am for a stopover & filling our tummy. It is one of the finest & elaborate resort kind of restaurant with plenty of space and a well-built dining area. The road so far is good enough to drive with ease in early hours.

The Khajuraho Group of Temples are reportedly constructed during 10th& 11th century by the Chandelas and dedicated to the Hindus & Jains. Most of the temples are constructed by hard sedimentary rocks and erected in an advanced geometrical technology avoiding cementing mortars. A few are constructed by granites too. This was perhaps to enhance the longevity and religious faiths. The architecture is “Nagara-Style” and rock cut sculptures are similar to wooden carvings during the earlier ages. The intricately expressive figures and designs are profusely available in all the structures. It is believed that there was originally 85 temples constructed around 25 km out of which only 25 survived within 6 km now. They are divided in three zones viz. Western Group, Eastern Group & Southern Group. A brief of these exquisite temples are compiled herewith for reader’s delight.

Waiting was a waste so we reached at the other site where a tigress with her cubs was reportedly roaming on the other bank of Ken. The river snakes inside the entire forest adding mystical beauty on one side and the Vindhya Range of hills on the other side, enhancing the charm naturally. A team of National Geographic was camping with sophisticated equipment of photography. Waiting patiently in silence & clicking at times mysteriously, I understand they were filming the tigress and the cubs. I tried to aim my 50x imitating their style on the same direction but could find nothing but rocks and bushes till infinity. In 10 mins I was restless and gave-up. Those guys were still on job and may remain there for months, as informed. Not our cup of tea. We may enjoy watching, if anything they will produce in their channel some day at the leisure of our cosy living rooms or bedrooms.
Down thereafter, we stopped at the banks of Ken River where one can enjoy boating in the wild with occasional sighting of Gharials. Boating in the serene landscape was experimental but the weather didn’t support & soon it was dark & started raining heavily.

Deeg is a small town as close as 30 km from Bharatpur however, with good connectivity with Delhi & Agra. Its pre-historic presence is inscribed in the Skanda Purana as Dirghapura. Also important because of it lies within the range of 32 km Parikrama path starting from Goverdhan in Mathura.

Abu Road to Chottorgarh is 260 km on excellent tar and may take almost 4 to 5 hours in no haste & less traffic. At or around 12 noon we entered the town by rolling further 2-3 km on a link road connecting the city with the bye-pass. We decided to take a guide so that we may not waste time in road enquiries and also venture the fort area with ease. Soon we found one reasonably at Rs. 250/- and entered the Fort through one of the seven legendary POL (gates) Each gate has a distinct name and relevance, just to quote the names without digging into history, they are the Padan Pol, Bhairon Pol, Hanuman Pol, Jorla Pol, Ganesh Pol, Laxman Pol and Ram Pol. If I remember, we entered through the Ganesh Pol as there was an Idol of Ganesha at the entry.

Soon after, we discovered that the fort is much larger and magnificent than it actually appears from distant. Situated at a high hillock fortifying the entire hill with high solid rock boundary, it is spread covering close to 3 km2. The Fort was constructed by the Mauryans in the 7th century AD however, mythological beliefs claim, it was constructed by Bhima of Mahabharata. The fort boasts to be the palatial abode of many famous warriors such as Gora, Badal, Rana Kumbha, Maharana Pratap, Jaimal, Patta, etc. for many years before it was captured by the Mughals.

Evening is extremely lively in Mt. Abu, unlike other hills, the Mall road here remains crowded till late in the evening, say upto 10 – 11 pm at least. One of the safest hill station, less colder due to lower altitude and superb law and order, I was always pleased to see the care free atmosphere there. Diwali being just passed, the decorative lightings of the shops and hotels were still shimmering, adding extra charm to the already charming place. The vibrant stalls, mostly laden with Gujrati & Rajasthani stuffs are bound to lure your better half. Rows of ice-cream shops, pastries, cookies and crushed ice-balls (Golas) in different flavor are the trade mark of Mt. Abu.

Activities around Nakki Lake are however, stalled at 8 pm for security reasons. The surrounding is expanding with growing popularity and increasing inflow since I have last visited the place in 1998 and again in 2008.