After experiencing the breathtaking life time visual delight at White Rann, we rocketed towards Khavda again from where we needed to drive towards Bhuj on SH-45 and then a right turn towards Nakhatrana on SH-42. The approximate shortest distance upto Lakhpat is 200 km, if you want to visit the forted town. For Narayan Sarovar you may turn left on Naliya-Narayan Sarovar link road after crossing the last Reliance Petrol Pump, the other situated at Naliya.

Once reaching Nakhatrana, we were on SH-42, a straight black, single but spotless road. Soon we noticed a board flashing every one km on our left. It was about the Mata-no-Madh, A quick reference on Wikipedia revealed of the very holy Ashapura Mata Temple situated there. Gradually we reached closer and sighted a temple on a hillock far on the left. Coming closer unto the zero miles, a road diverted onto left towards a suddenly crowded rural settlement. Reaching closer, we were told about the abandoned temple which was visible from the far, on the hillock. A new temple at the foot hill is where the much revered deity is worshipped now. The bustling atmosphere, very well suggested about the importance of the shrine in Kutch. A short break to have a glimpse of the Deity and bow was definitely a worth.

About Mata no Madh: Compiled from Wikipedia

“Mata no Madh is name of the place, where the famous temple of Ashapura Mata, the head deity of Kutch and kuldevi ofJadeja rulers stands. It is located about 80 km from Bhuj, the capital of erstwhile Princely State of Cutch and now headquarters of Kutch.

There are two temples, the original old temple above the hill, which lies abandoned as after the earthquake of 1819, a new temple below the hill was built, which now houses the deity and is in use ever since”.

Blessed with the blessings of the Deity of Kutch, we continued on the SH-42 to reach Fort Lakhpat at the edge of Kori Creek but inadvertently missed to fill the tank which was almost empty by then. The road from Dayapar upto Lakhpat was rigidly straight, spotless, hassle free and quite un-inhabited. 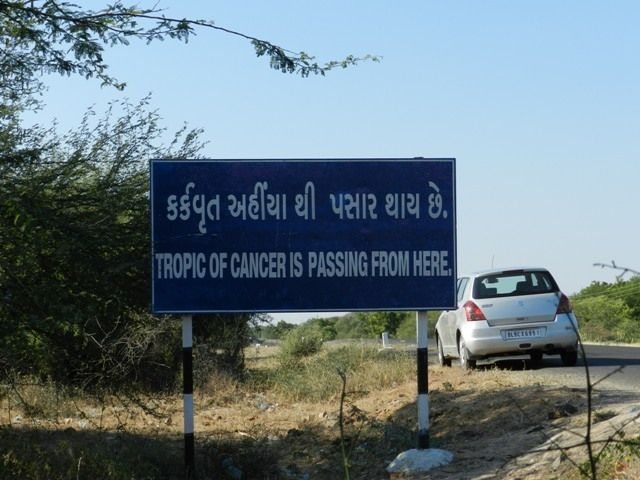 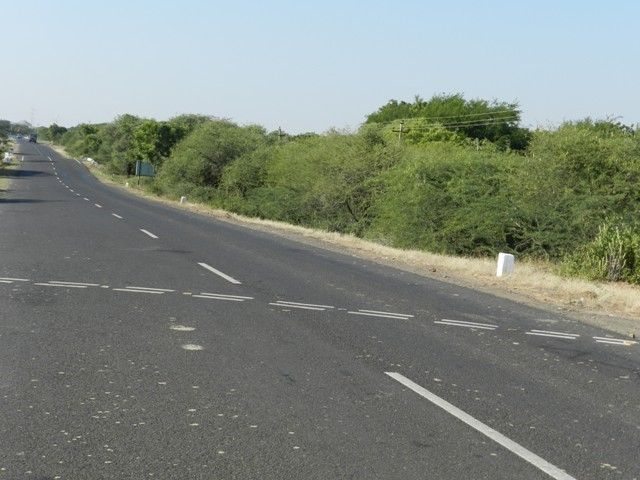 About 40-45 kilometers prior to Lakhpat, another sensational surprise was waiting to accrue the thrill of our journey. A large board on our left was displaying, “Tropic of Cancer is passing from here” and I immediately stopped and stepped out to capture the moment in my camera. A few steps from the display board were a white line drawn on the road to indicate the probable imaginary line. Unbelievable, am I really witnessing the imaginary line, about which we have read only in our geography books during school days! Hereafter, we didn’t find a single vehicle or any habitat on the way except occasional sighting of monitor lizards and mongoose shying away into the bushes, until hitting the dead end at the ruined magnificent fort. 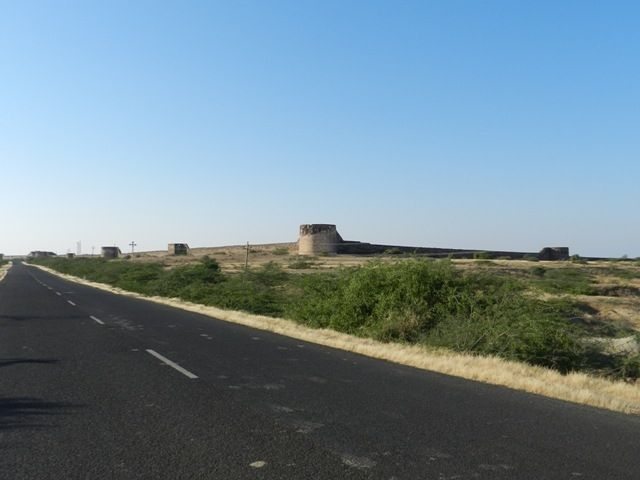 Glimpse of the Ghost Town 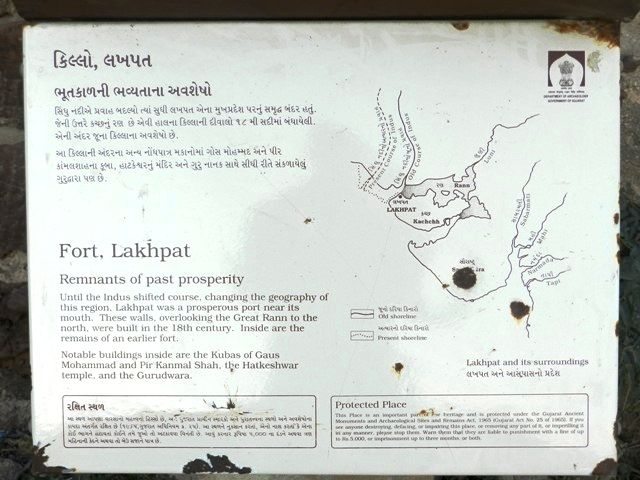 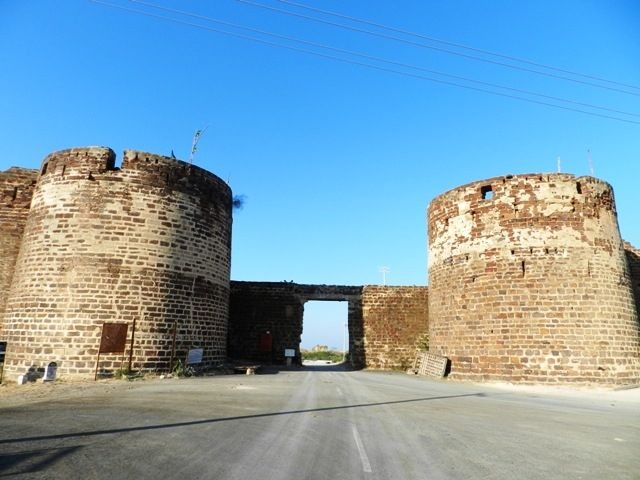 A small tea stall was located at the corner of the main entrance; we stepped down with a pride of reaching the extreme north-west, beyond which is the Kori Creek on the left and the vast Raan on its right. While referring the map, it seemed unbelievable to reach out the extremely distant part of the land. The display boards at the entry points were boasting about the glorious past of the now, protected place. Looking around, we didn’t find anybody to guide, we entered inside the gate. Soon found a Gurudwara, which was unlike the conventional domed ones, a row of thatched roofed houses with the religious symbol of Kirpan erected on a long pipe. A Sikh devotee came out to welcome us cordially and informed about the importance of the place out of his own treasure of knowledge.

After bowing at the revered Gurudwara Lakhpat Sahib, we found a temple nearby but couldn’t find the entry to it. Just then an elderly man accompanied with a younger man approached us with a generous smile. They were perhaps happy to see the tourists, later during our conversation revealed that they were the few out of around 500 populations left in the fortified, ghost town. The temple I referred is an ancient Shiva temple, popularly called Hatkeshwar Mahadev. 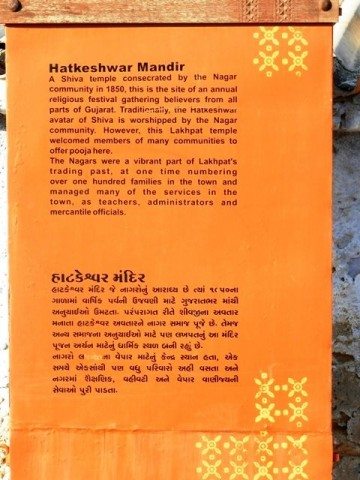 Pertinent to mention, this century old shrine seemed unattended and neglected until, the enthusiastic men accompanying us with their immaculate efforts gradually started restoring and rejuvenating it. A priest, from Bhopal happened to visit the place and on request stayed back. The necessary arrangement for the priest’s livelihood was keenly done by the locals. The regular worshipping was just started with those small but useful efforts. 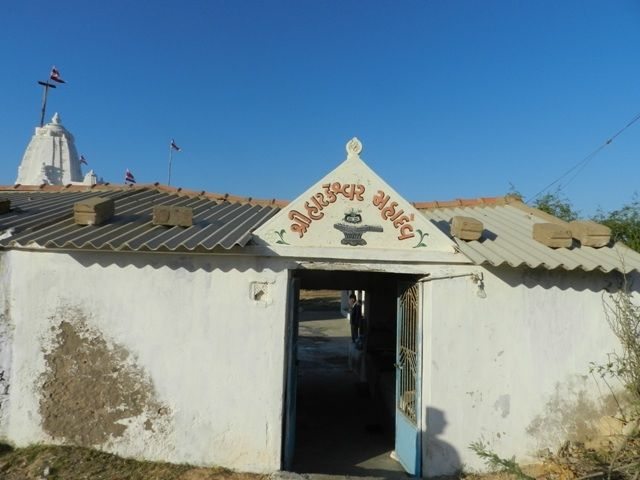 Destiny of the Historical Shrine 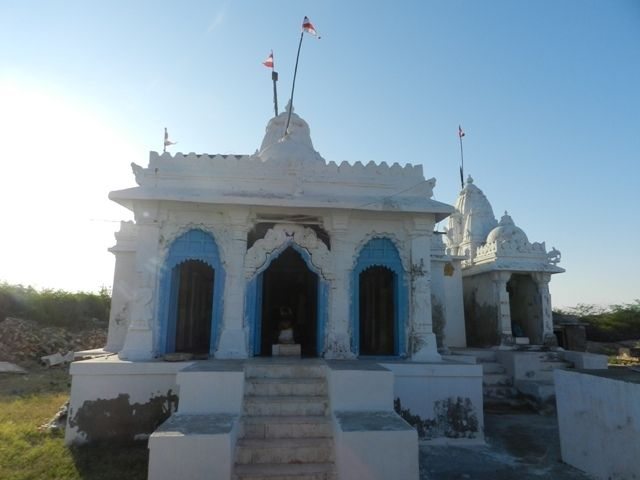 The entry was through a small wooden door which was closed at the time of our visit as the priest was away. On his coming back, we entered into the premise and found a small temple, recently whitewashed exist with idols of few deities besides the Lingam of Lord Shiva. We paid our obeisance to the forgotten lord. We were also offered tea, which was prepared by the priest himself and served in plastic cups, made available by the local enthusiasts. The nearest buying place is perhaps 40-50 km away, hence life must not be easy for all there. 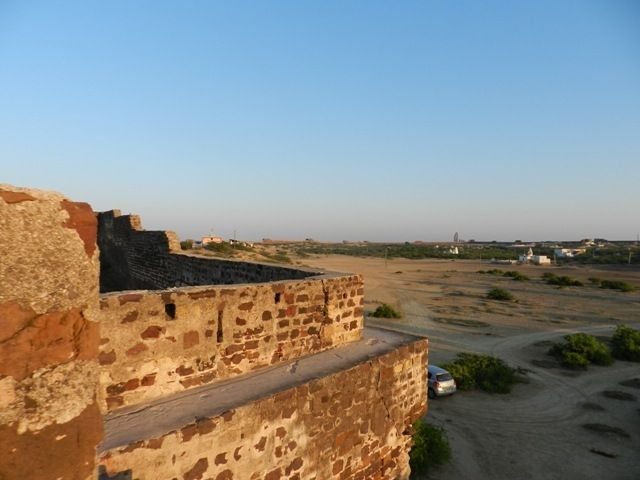 Inside view of Lakhpat

Coming out of the shrine with formal bidding and contributing our bit for the good cause, we walked towards the bastion, where the BSF personnel were on vigil-duty, loaded with loads of arms and binoculars. Indian tourists are allowed to reach out upto the top of the fort wall while others need permission, granted at Bhuj. 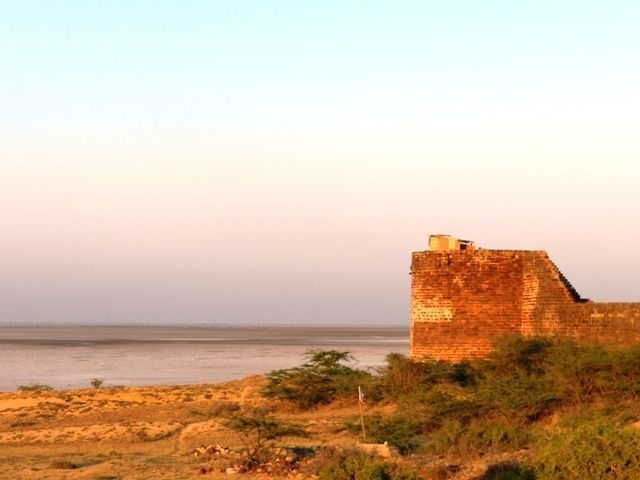 A splendid rear view from the FORT 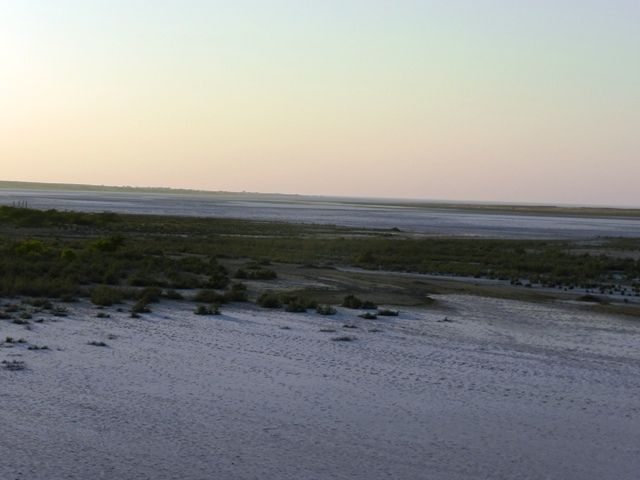 Vast Marsh Land behind the Fort 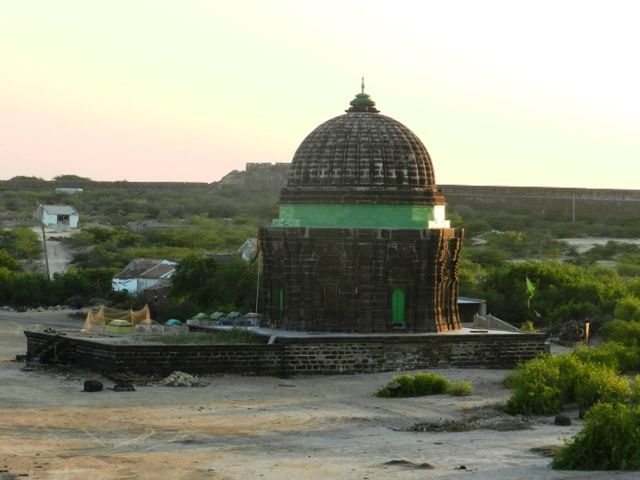 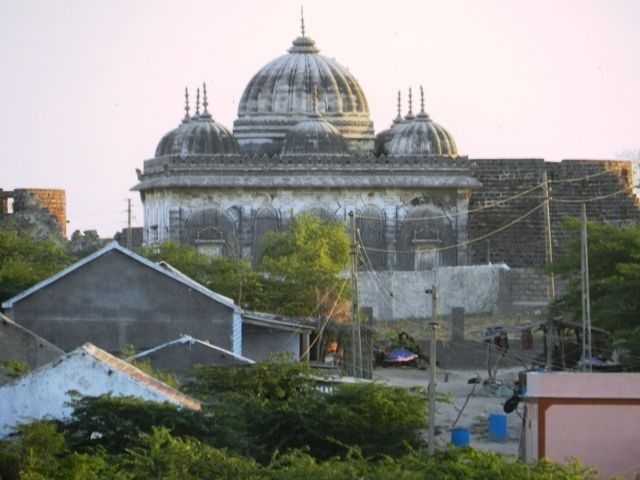 Coming out of the nostalgic tranquility of the fortified ancient ruined settlement, I was still wondering about the much talked tourism of the state. No basic infrastructure, no petrol pumps, no accommodation facilities around hundreds of miles and not even a public transport beyond Dayapar. Totally discriminated, ignored, neglected, isolated and disconnected place, which is yet surviving within the boundary of our Nation. Is it due to infiltration prone zone!

About the Ghost Town: Lakhpat (Compiled from Wikipedia)

“The literal meaning of Lakhpat is the city of millionaire as historically town was bustling with port activities and had daily revenue of one lakh Kori, the former currency.

Today it is a sparsely populated earning the sobriquet of the Ghost town, a city of ruins of buildings and a magnificent fort surrounding them. Historically it has been very important trading post connecting Gujarat to Sindh. The waters of Sindhu River used to flow into Lakhpat and further onto Deshalpar (Gunthli). Rice used to be cultivated and Lakhpat used to give an annual revenue of 800,000 Koris just from rice. It is also said that Lakhpat used to generate an income of 100,000 Koris everyday from maritime activities. The 7 km long fort walls was erected by Jamadar Fateh Muhammed in 1801. After the earthquake of 1819 a natural dam known as the Allahbund was formed, Sindhu changed its course of flow and started flowing into the Arabian Sea further north. Thus Lakhpat lost its importance as a port.

During the period of Muslim invasion, the Khudabadi Sonara Community and other Hindus who had not converted to Islam under the Ghaznavids moved to Vigho Kot and Lakhpat (in Kutch) around 1028 AD, to avoid genocide at the hands of the invading Muslims and to live peacefully under Hindu Samma rulers.

Sayyed Pir Shah Dargah has nine-domed with intricate carvings. Nani Mai Dargah, Hatkeshwar Temple amongst others in the old town are reminisces of the glorious past.

Lakhpat Gurudwara Sahib is a religious place for the Sikhs. It is believed that Guru Nanak on his way to Mecca for Haj stayed over here. This Gurdwara have its relics like footwear and palkhi. They are worshiped by the Udasi Sect. The Gurudwara is declared a protected monument by the state archeological department and has won the UNESCO award for restoration after the earthquake.