After coming out of the Ghost Town, Lakhpat, I was anxious if we can reach another 30 km with the already dried tank. There was no hope of any assistance in case the car goes on hunger strike. The straight road ahead was on the other hand challenging to run on it, along the creek all the way upto Narayan Sarovar. Let me tell you, my wife was not aware of the situation hence, she was too energetic in enjoying the pacific dreadful atmosphere. Daringly, I started rolling on the straight single road with a/c off and more on neutral. With thumping heart, I was just praying to reach as closer as possible to any settlements or inhabited locality. But alas! We were driving through the Desert Sanctuary, popularly known as Narayan Sarovar Wild Life Sanctuary. I had recently, before planning the trip to Gujrat on road read about it and found that there is neither public conveyance nor any settlements in the entire zone. 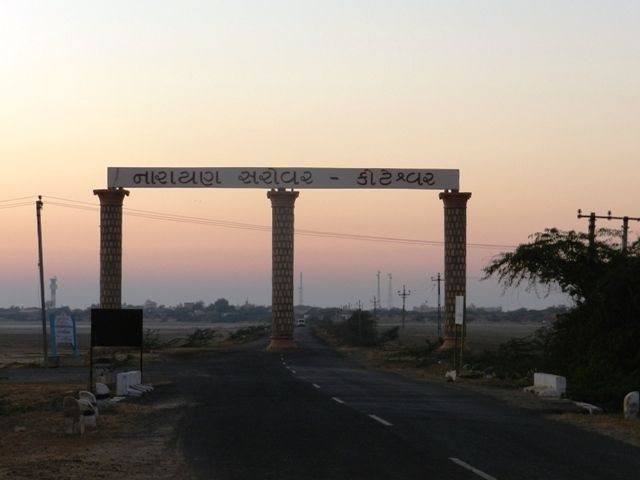 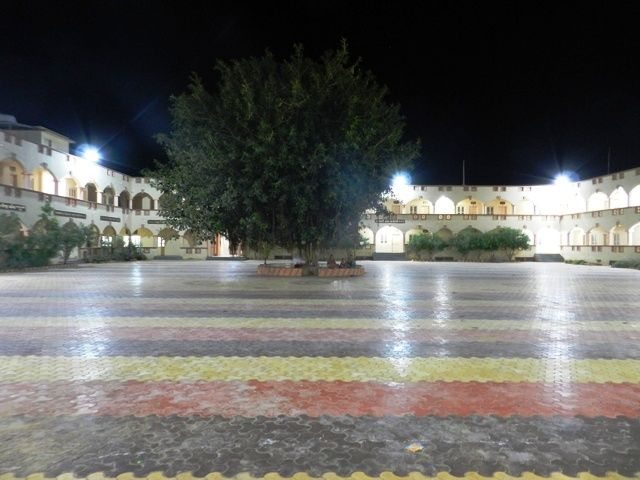 Open Courtyard inside the Dharamshala

We were provided with a room in the new Dharamshala at Rs. 200/- which included the free meal or Langar in the old Dharamshala. This was one of the most tiring and exhaustive days in our entire journey. Starting from Bhuj early morning, I drove all the way upto Narayan Sarovar in a single day after visiting amazing Kalo Dungar, enchanting White Rann and historical Fort Lakhpat, besides other short breaks on route. 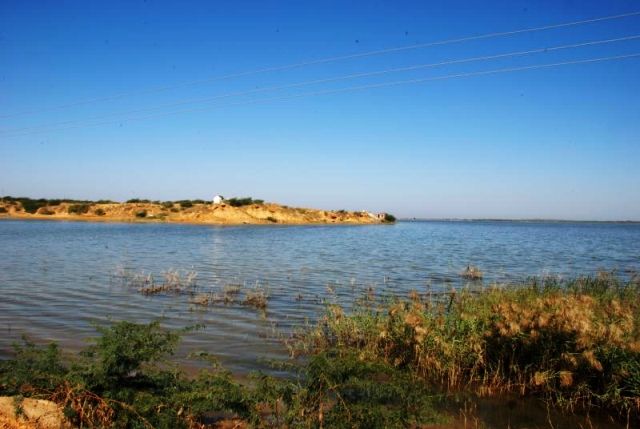 Next morning, we waited till almost 8 am until the delayed sun rise, due to the extreme west location, after which we visited the Narayan Sarovar entering through the temple complex. The temple houses innumerable deities but the main shrine is dedicated to Lord Vishnu. Mythology says Narayana, another name of Vishnu has created the lake while his stay there. Also, it is popular that the holy water of River Saraswati, all the way, reached to fill the lake, thus sacred. In Hindu Mythology Narayan Sarovar is considered as one of the five most sacred lakes, others equally revered are the Mansarovar in Tibet, Bhubneshwar in Orissa, Pushkar in Rajasthan and Pampa in Karnataka. Together they are called Panch-Sarovar like the Char-Dham. The sanctity of the lake and up-keeping was again painful to witness therefore, we preferred to sprinkle the holy water for the ritual. 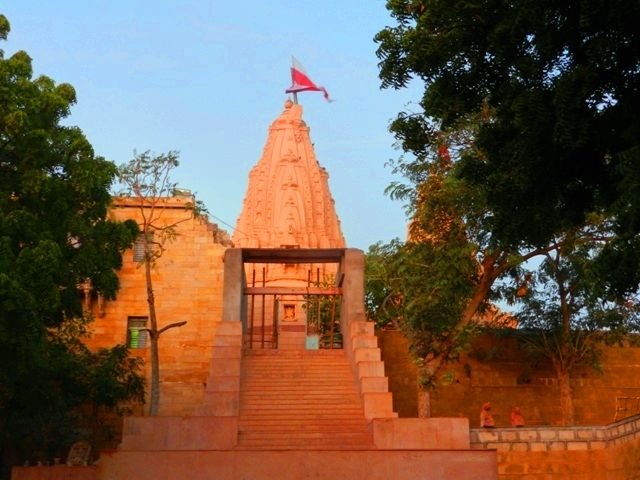 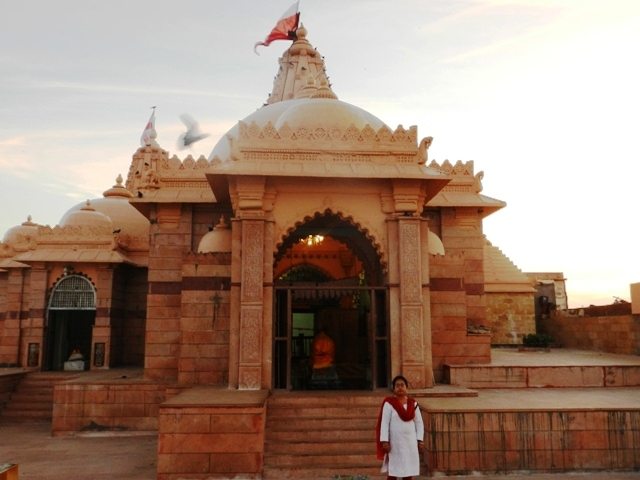 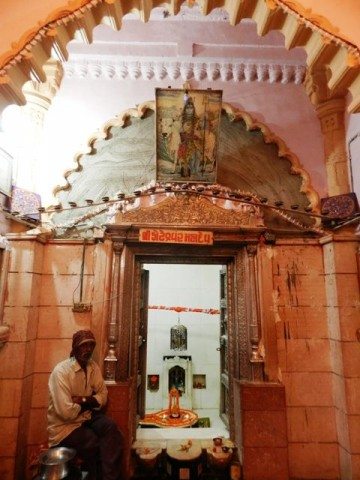 Nandi inside the Shrine

Five kilometers further is situated the very ancient Koteshwar Mahadev Temple at the dead end of the land mass beyond which is the vast salt marsh on the right and the rest surrounded by water, mockingly merging the man made boundaries. It is believed that Ravana was blessed by Lord Shiva and gifted the miraculous Lingam with a boon of immortality lest the lingam shall not be dropped on the way. The other gods, fearing supremacy of Ravana played foul by creating coerced dropping. Once put down, the lingam dispersed in crores (ancient, Koti). Out of illusion Ravana picked the imitated one, thus leaving the original at Koteshwar. Ever since, the Lingam is worshipped as Koteshwar Mahadev. 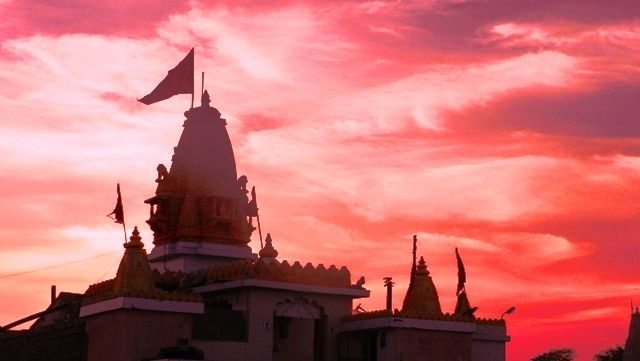 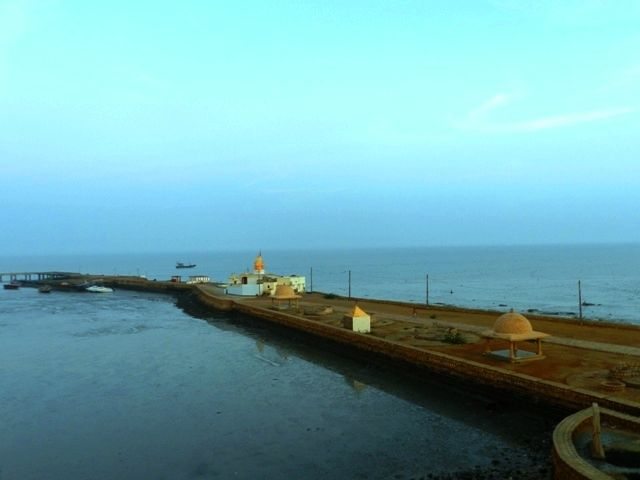 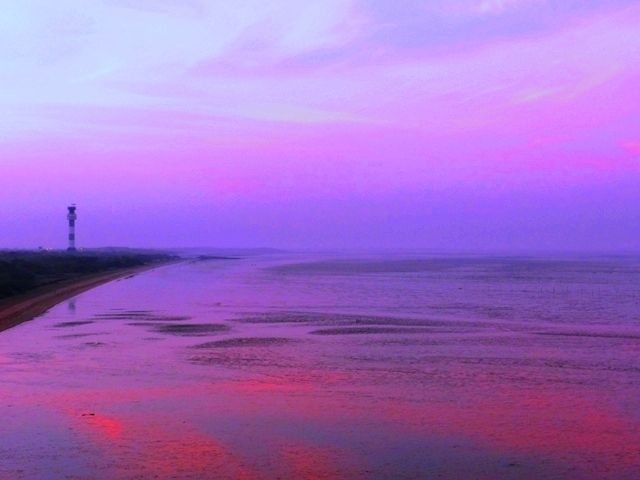 The temple is situated at the edge of the vast water body of Kori Creek hence, constructed on a high platform and bounded by stone boundary to protect damage from constant water splashing. It was a pleasant delight to glimpse the intricately built structure in lowly brightened pale yellow light of the rising sun. It was told that the lights in Karachi, Pakistan are visible from there in clear nights. Unbelievable because Karachi seems far off from there. The fishing boats of India, while sailing in the Creek bear furling Indian Tri Colour flags and similarly the Pakistanis bear their National Flags as notions of their nationality. This is perhaps to keep check on them from dare crossing the invisible boundary, drawn on water and also in identifying the intruders who are otherwise identical naturally.