Sparing a day leisurely during March in our service industry was a challenge for even a short trip. Our anniversary falling on Thursday, 13th March I was wanting a break and my colleagues assured to manage somehow when I sceptically agreed for a short trip to resume office on Monday, 15th morning.

Panna & Khajuraho was in mind hence without digging or boggling much we decided to reach there on 13th morning by starting from Delhi on 12th evening. Road journey was not advisable by many bloggers specially during night on that route. Also, road condition was not much appreciated by many of them hence, we opted train journey. I don’t remember any recent train journey, so it was quite a fun & excitement. Luckily I got confirmed AC-2 tickets in UP Sampark Kranti for 12th but a W/L return ticket for 15th. Pretty confident about its confirming in a week, I booked accommodation in Jungle Camp, Madla& an evening safari in Panna Tiger Reserve on 13th. All bookings were in accordance with the reviews of travel enthusiasts on various sites.

On 12th we boarded the train to reach Khajuraho as early as 7 am, two hours delayed though. Since dawn I was hanging outside, inhaling the cool moist air & captivating the very familiar rocky-hilly landscape similar in Jharkhand, where I stayed, studied & worked for many years. Lost in my childhood memories when I was often scolded by my mother while leaning out the running train. It was irritating to hear those scary cowardly advises when I knew that my fists are tight on those iron bars at the gates. I amused for a while and sad too because she is no more to scream or advise when I am doing the same foolish act again. 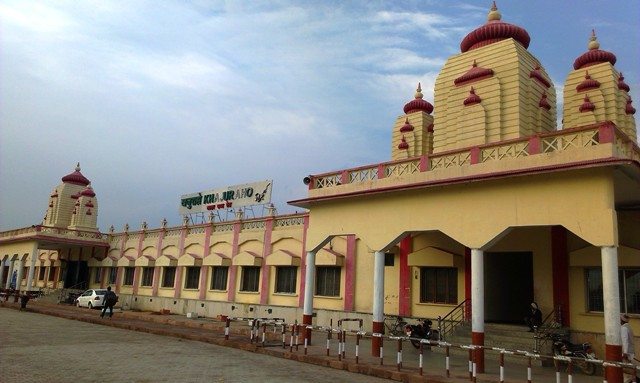 Khajuraho Junction! A long platform relatively new & in modern shape, clean and less crowded. The taxi and auto drivers approached immediately to offer their services with best hotel deals. The station being quite far from the town, almost 8 kms, hiring autos or taxis is a necessity even to the natives. Also, Panna 30 km, the neighbouring town avail rail facility from Khajuraho, being the nearest railway station. Mini Buses also ply but for Panna & villages on route.

Jungle Camp, Madla is 20-22 km from Khajuraho Station on Panna-Satna Hwy. A fair deal with “Jai” our driver for a brand new Indigo, without even a number plate, was finalised @ Rs. 600/- and through.

We were informed that the road from Khajuraho to Satna via Panna, a 100 km stretch is in very bad shape with knee deep ditches and boulders scattered around, dusty with no tar. Why! Because the stretch is a National Highway hence the State Government has no say. The contractors are paid stage wise, since their payments are not remitted for digging the previous road, they are not investing further. Strangely, people have no grudge but pain in their innocent eyes are easily visible. Why don’t people protest! Sir, it is not Delhi, where you can sit at Jantar Mantar and media will cover your story with hype. Why don’t they vote against the ruling party! People are not educated enough and can’t dare go against their caste and community & who is the right candidate to trust upon. 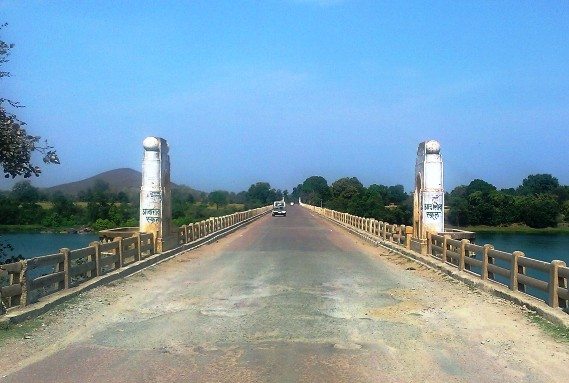 The elite man from Delhi was trying to change the existing situation in moments. Interrupted by my wife, Jai, how far is Ken River! It is near your camp, Madam. Wow! But don’t try to dip in because crocodiles are around and may attack, warned by Jai. 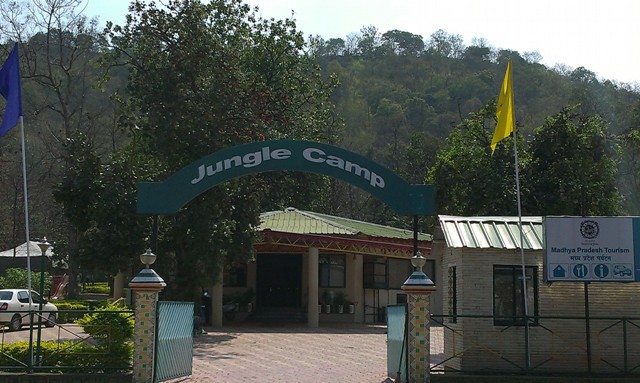 The road all the way was like no-road and worse than described. In almost two hours we reached our camp alongside Panna Road, a large campus adjacent to the entry gate of Panna Tiger Reserve. River Ken is at a walking distance & Safari Permit issuing office,Karnawati Interpretation Centre is a 10 min walk.

On the way I amended my original itinerary circumstantially. Looking into the road condition I planned to keep the taxi booked throughout our stay. At amicable negotiation it was agreed @ Rs. 3000/- for three days. The plan was to visit L&S show at Khajuraho the same evening after safari. Next morning a visit to Ajaigarh Fort & on 15th Raneh Fall, visits to all the temples in Khajuraho & drop at station. 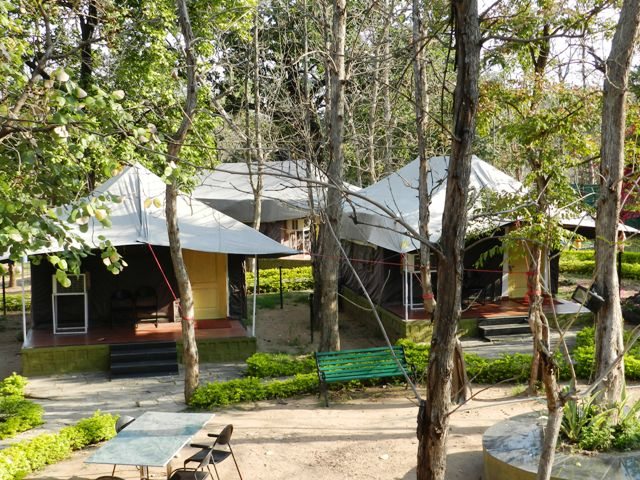 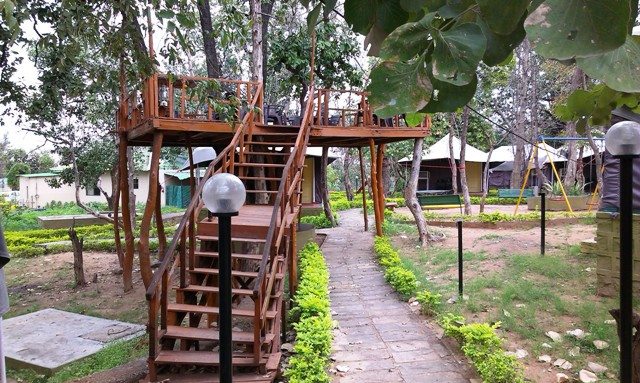 We were offered one of the Swiss tents adjacent to the Tree-House. A spacious, well equipped and comfortable tented accommodation with adequate privacy is worth a price at first sight. Ambiance, Landscape, Jungle Feel & maintenance are at par. Food by Chef Mr. Gupta was simple but delicious. The entire team is meticulous and well mannered.

Breakfast was complimentary and sumptuously delicious. We went for a walk to the mighty Ken River, clicked few shots & returned. Loitering around the lawns in Jungle Camp was also nice, soothing & de-stressing specially after few months’ hectic cerebration. 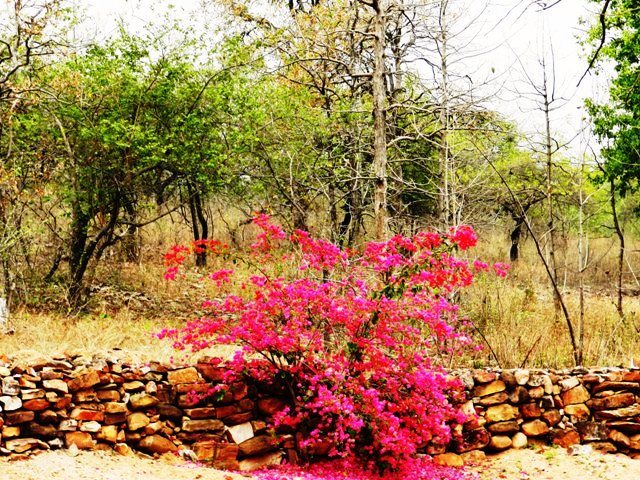 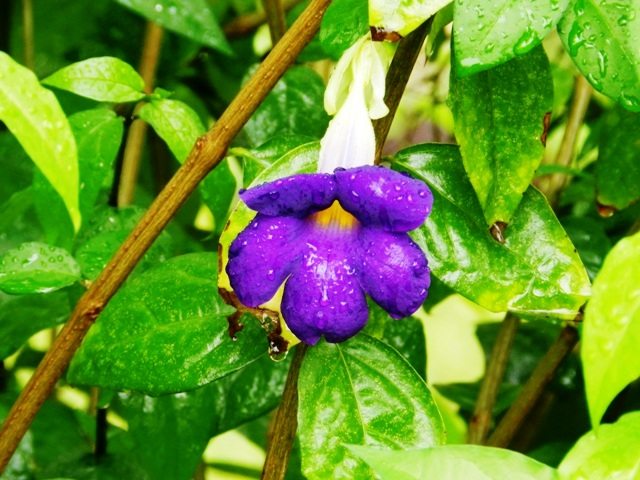 At 2.30 pm our Gypsy arrived for the safari. After collecting the entry permit from Karnawati Interpretation Centre alongwith the mandatory guide we entered into the beautiful deciduous forest. This was my first visit, so I was very excited as always. In 15-20 min we were deep inside the jungle engulfed in fragrance of the wild. A leopard sighting reported and all the drivers speeded on the bumpy rocky track for the delight. One of the earlier group was boastingly displaying the rare moment caught in their cameras. Lucky guys, soon then we sighted the animal shying away behind the bushes quite closely and vanished before we could capture the size. 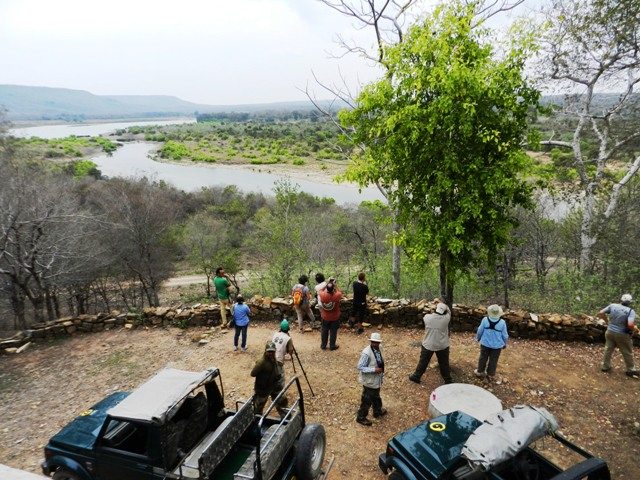 Waiting was a waste so we reached at the other site where a tigress with her cubs was reportedly roaming on the other bank of Ken. The river snakes inside the entire forest adding mystical beauty on one side and the Vindhya Range of hills on the other side, enhancing the charm naturally. A team of National Geographic was camping with sophisticated equipment of photography. Waiting patiently in silence & clicking at times mysteriously, I understand they were filming the tigress and the cubs. I tried to aim my 50x imitating their style on the same direction but could find nothing but rocks and bushes till infinity. In 10 mins I was restless and gave-up. Those guys were still on job and may remain there for months, as informed. Not our cup of tea. We may enjoy watching, if anything they will produce in their channel some day at the leisure of our cosy living rooms or bedrooms. 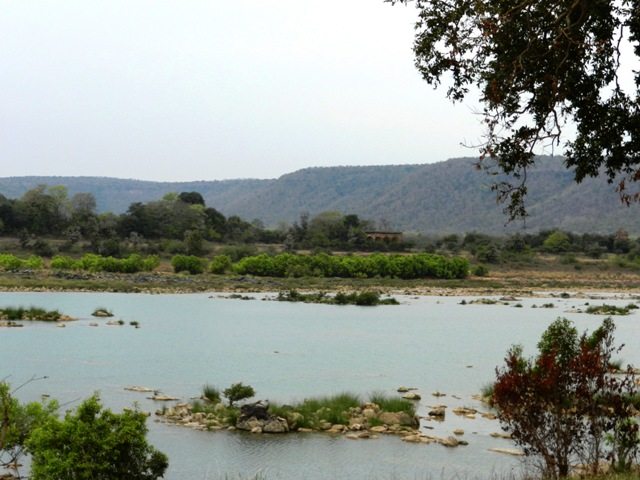 Ken River inside the Park 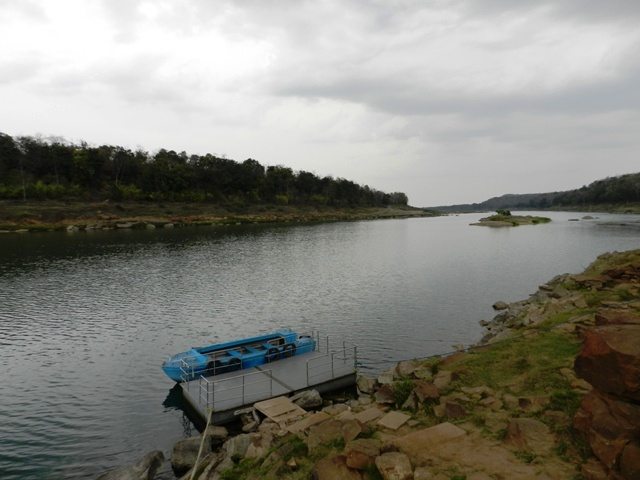 Boating inside the park

Down thereafter, we stopped at the banks of Ken River where one can enjoy boating in the wild with occasional sighting of Gharials. Boating in the serene landscape was experimental but the weather didn’t support & soon it was dark & started raining heavily.

The drivers rushed to exit because the track in most part of the jungle become slippery & treacherous after rain. A little before reaching the exit gate, my vigil eyes sighted a black object in the slopes of a hillock. On reversing the vehicle our guide confirmed, it was a sloth beer. The camera certified it too. The driver neared the gypsy upto as close as it was safe and we found a fully grown sloth bear resting. We were so excited to see the sloth in the wild for the first time. 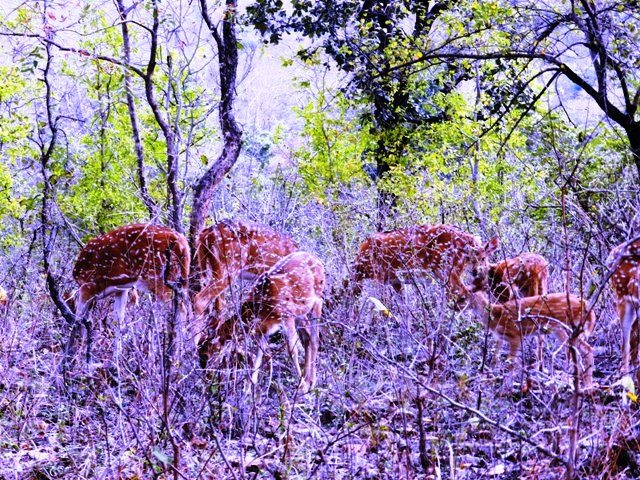 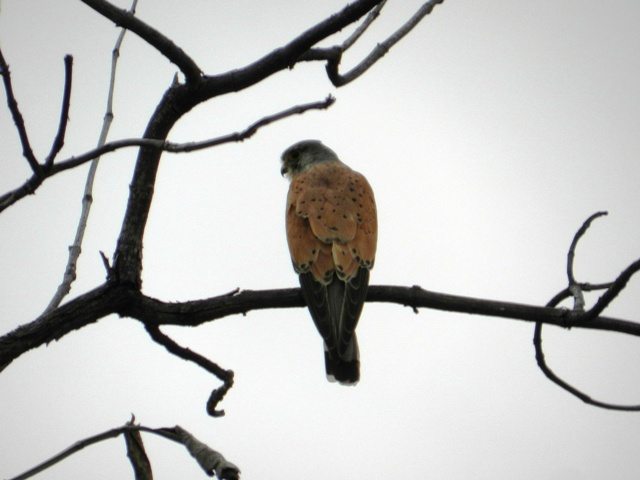 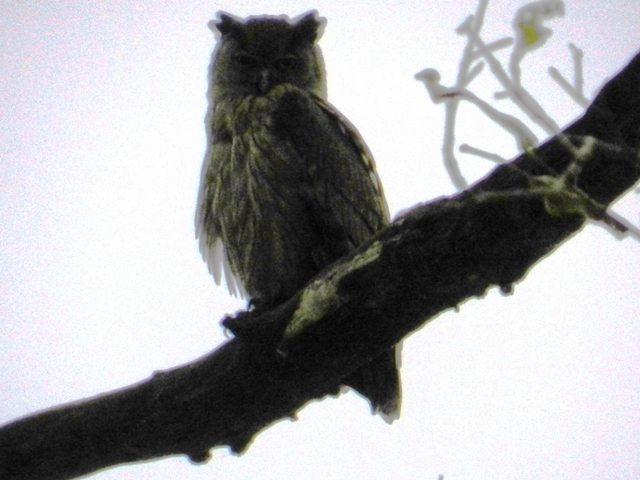 A short trip, but very enjoyable. Antelopes, Deer, Blue Bulls & other common animals and birds are in abundance and are common sights. Few endangered species of eagles were also sighted. 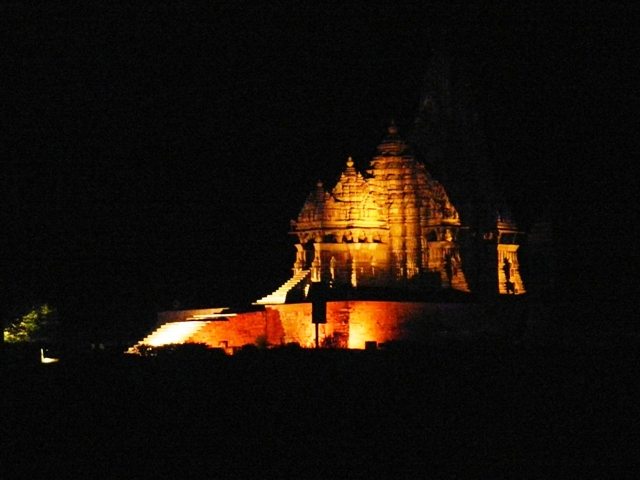 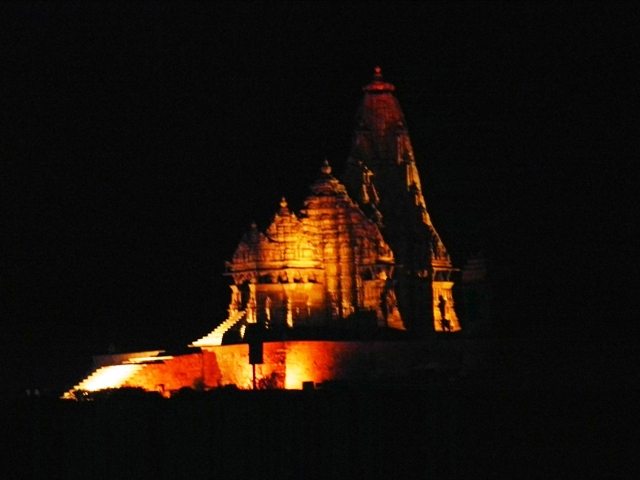 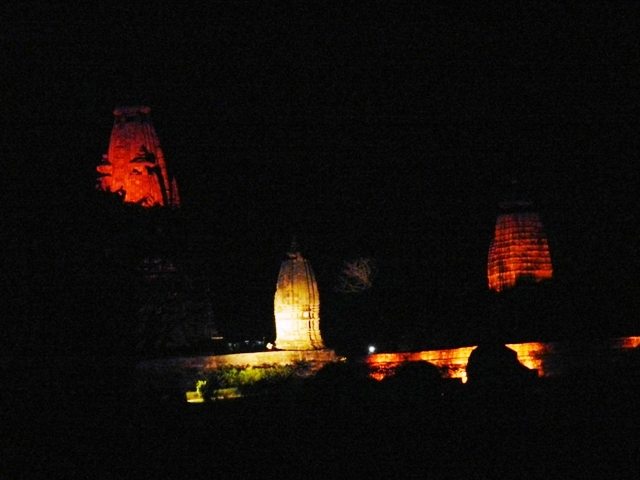 After a cup of tea & refreshments, we were on to Khajuraho to witness the Light & Sound show at the Western Group of Temples. The show timings are 7.30 pm (English) & 8.30 pm (Hindi). Entry fee is Rs. 200/- per adult. It was fabulous and worth witnessing the synchronised lighting with superb sound effects with a background commentary on its historical past. The cluster of Temples mesmerise the audience with its elegance in the effect of different shades of lights.

A folk dance show of five states is also organised at the nearby museum which we gave a miss because the timing is 7.30 pm to 8.30 pm, mostly visited by foreign tourists.

The day ended with a candle light dinner atop the tree house. In the darkness of wild, a glass of wine in the lap of nature was my idea of romancing the anniversary.

From far, we might resemble a black sinuous snake creeping on the white snows of Mt. Kedarkantha. A few meters from the peak, the sun breaks out of the Gangothri ranges painting the climbers face with morning light. Exhaustion and fear gives way to relief and when you sit down on the slabs of rocks that form the summit there’s even elation. We have done it! We have scaled a peak!