On the 2nd last day of the year 2013, it was pretty cold in Delhi-NCR. I was busy in furnishing my new office till late in the evening. Few phone calls from friends was puzzling me whether to join the 31st Night Booze or escape. The travel bug was however, biting harsh inside chasing to roll on the tar far off. Couldn’t dare however to speak a word at home after spending 20 days, 6000 km only one month back in Gujrat tour.

Late evening at home, my wife was watching TV when on a News Channel it was reported that Tigers from Ranthambhor have been relocated to Sariska. Immediately, I exclaimed, Wow! Shall we go there and try luck? My wife cunningly looked at me and replied a big NO! Next morning with gloomy face, I tried to convince her once again but in vain. At 2 pm my wife called me while I was in office and sanctioned my proposal.

Without wasting a moment I browsed the official site of RTDC & hastily booked our entry permits online. Reached home, packed the baggage and we were on for Alwar by 3 pm. Alwar to Sariska is around 40 km and as decided we took a hotel at Alwar so as to reach Sariska for the evening Safari on 1st January 2014.

I had visited Sariska twice prior to this and those were the disastrous dissatisfaction. Except the thorny bushes and herds of antelopes, the area was least wild, not even worth a feel of the wild. The Pandupol, a shrine deep inside the sanctuary invites local devotees in numbers especially on Tuesdays and Saturdays, thus erasing thoroughly the impression of its being a forest or a wild. 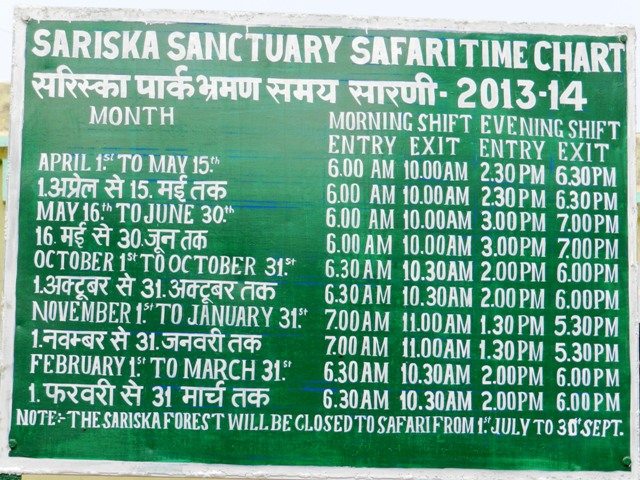 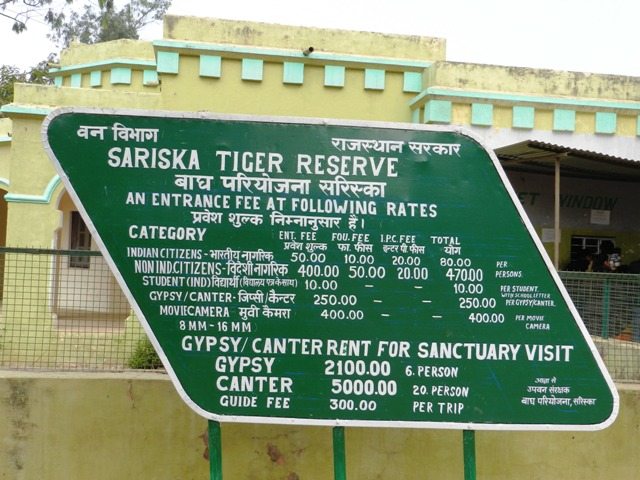 Without much expectations we reached the Permit Office at 12 noon, our safari was set for 1.30 pm to 5.30 pm with two seats booked in Gypsy. Due to New Year, the place was madly crowded, parking full with DL & HR plates. Soon, we were accompanied with a family of four comprising a child. Wrapped in woolens, gloves & mufflers we were set out for the coveted journey. Our Driver and Guide were boastful as usual about tiger sighting everyday and that if we are lucky we may sight a tigress reportedly roaming in Route No. 3, our route. Our co-passengers were excited to know that however, I being a seasoned player was amused to see their innocence and cunningly whispered to my wife about the deceitful talks of the driver and the guide. In past 20 years I have visited innumerable Parks and always heard such heartbreaking assurances of these folks hence, I was not wrong in my way. 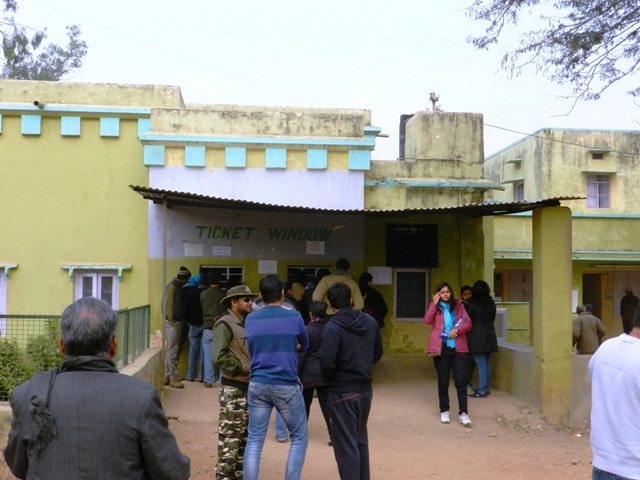 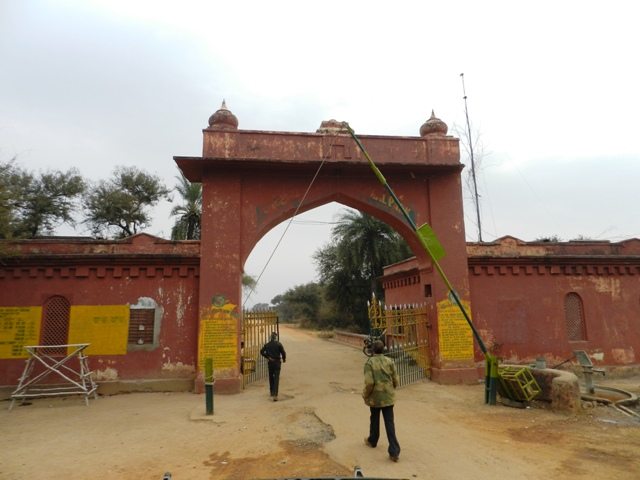 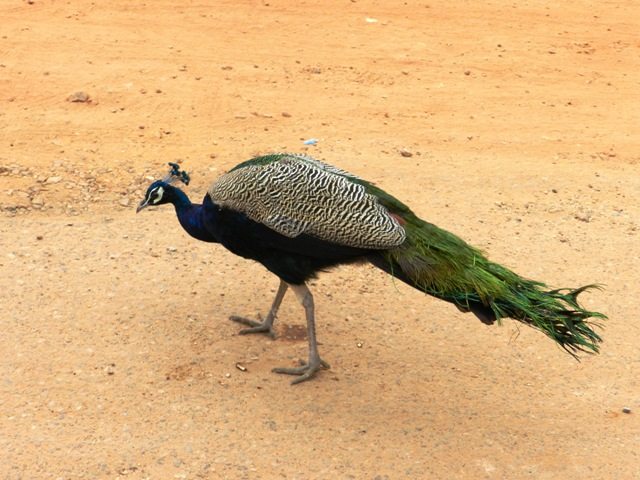 Entering through the gate the driver talked to some one and turned on a slip route towards the lake. There is a large water body on the left only 2-3 km from the main gate which I had visited during my earlier safaris and was always upset. Skillfully driving closer to a bushy marsh, we noticed two crocs resting on the dry land under a tree one out of which was relatively large, my first wild catch of the day. Before we could see the creatures eye-fully, our guide enthusiastically informed us about the tigress with collar had been tracked nearby. It was apprised by the Forest Guard on duty for keeping track on all the migrated Tigers, who was incidentally the driver’s brother.

Lake inside the Sanctuary 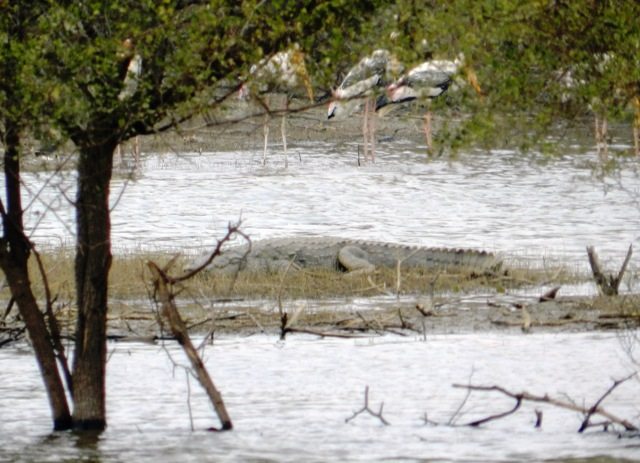 Rushing on the bumpy track, we reached at the probable spot with crumbled bones. The family with a kid was very annoyed and the child was screaming as loud as the warning call by the antelopes and the aviators. I on the other hand was pretty sure of “No-Sighting” and that the entire exercise was only to impress us and later with a humble gloomy face would end up with the common verse, “sighting a tiger is only by chance and not by choice”.

Enjoying the wilderness, we waited for more than 2 hours at the same spot. The Forest Guard and the Driver was in constant contact and were instructed to remain at the spot. Occasional alarms hyped the atmosphere and gradually back to normalcy. Two more gypsies joined us with a gang of picnickers in each but thankfully the restless fellows left after few minutes of nuisance. Our driver was patient and tried to maintain our cool too including the kid’s. Inside the forest near a marsh canopied with dense bushes, the cold wind was piercing through the woolens, shivering the bones.

More than three hours motionless, without a single fag was little too much. My eyes petrified while gazing wide around, every time when there was a bleak hope of the Tigress to appear. My camera was zooming in search of the slightest movement of any yellow thing. Antelopes, Peacocks and herd of Spotted Deer went pass the gorge by our side as it was almost dusky. 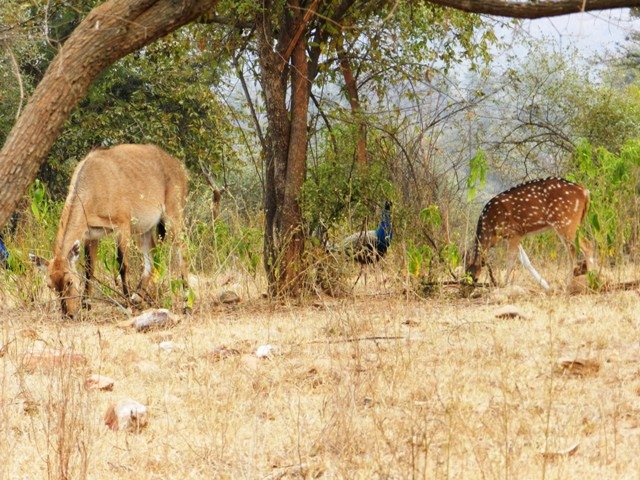 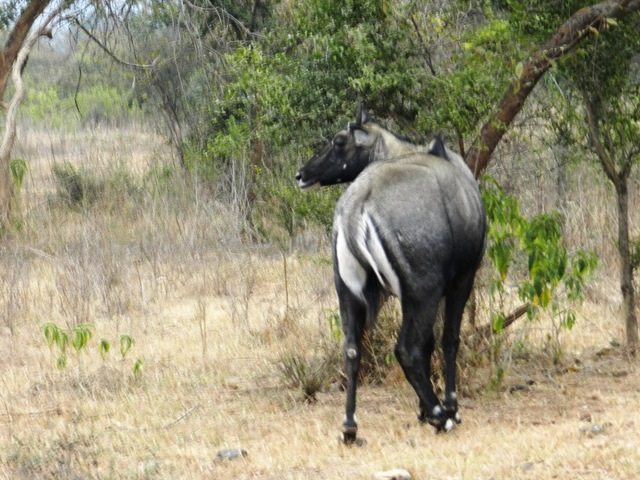 We lost hope and so were the driver and guide, decided to return as it was almost 4.45 pm and out allotted time was nearly ended. As the gypsy rolled back on the bumps, all of us were dead silent lost in infinite tranquility. The silence broke with a mobile ring tone, it was the Forest guard, dropping the call our gypsy rushed vigorously with a gesture by the guide to hold tight and remain silent. In 2 minutes we were back at the same spot where we had been waiting for more than 3 hours. This time few more gypsies also arrived. 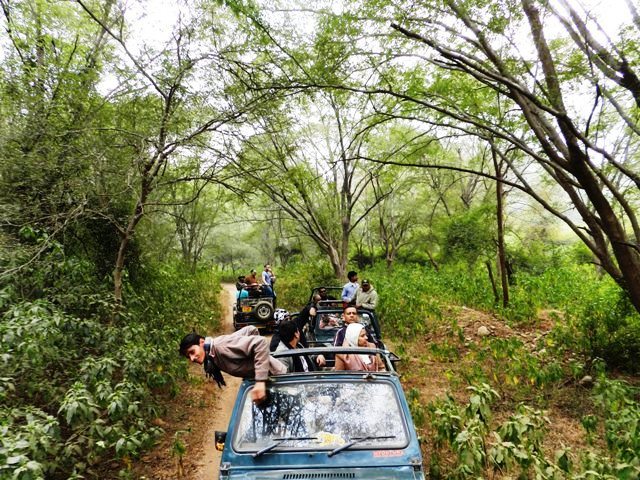 Engines off and engulfed in a dreadful silence all eyes were wide open and meticulously on job to grab the first sight of the magnificent creature. The Forest Guard was also around, holding a tracking device, seemed immaculately dutiful only occasionally gesturing the groups to keep silent, the driver and guides too were vigil on the silence issue. 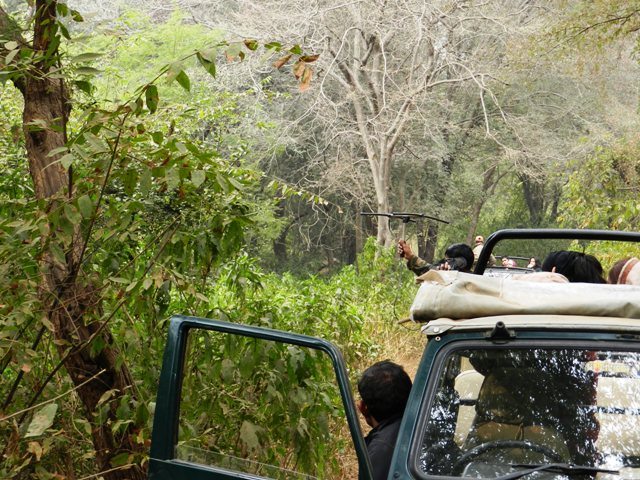 I was ready with my camera, wiped the lens twice, removed the gloves and positioned myself stood high on the rear seat resting my back properly. Looking around with extra vigil eyes for more than 10 minutes discovered no sign of any big cat. Relaxed and confirmed of my hard luck again I reclined my stiff body to the iron bars of the gypsy and lazily looked at a pair of peacocks marching past close to our gypsy. That was the end of the show; believingly our driver was gestured by fellow drivers to give them a way as we were half on the track and half towards the bushes into the jungle.

Our driver gestured them back to wait a few moments and relaxed on his seat. Soon then I saw a huge face with shining yellow and black strips and a pair of glittering moist eyes gazing at me out of the bushes as close as five feet. I was numb and my body motionless, eyes awfully extra wide and the senses paralysed. The most beautiful creature seemed most dreadful and scary when appeared suddenly at a hand shaking distance. The camera stopped responding & I was literally confused whether to glance the beautiful queen through eyes or on the camera screen. A huge healthy body with a long tail and large head stood in front our gypsy staring commandingly to give her a way as our gypsy was obstructing her path. In a moment she made her way bruising her velvet skin with our gypsy & appeared on the open track walking leisurely. The other gypsies rumbled with each other to make way and follow her for the magical glimpse. 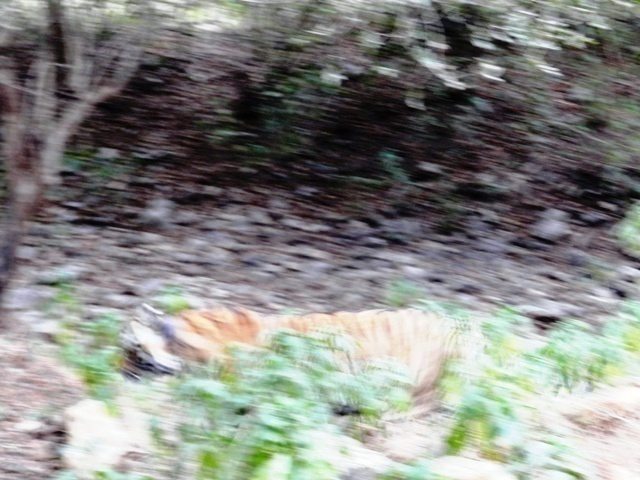 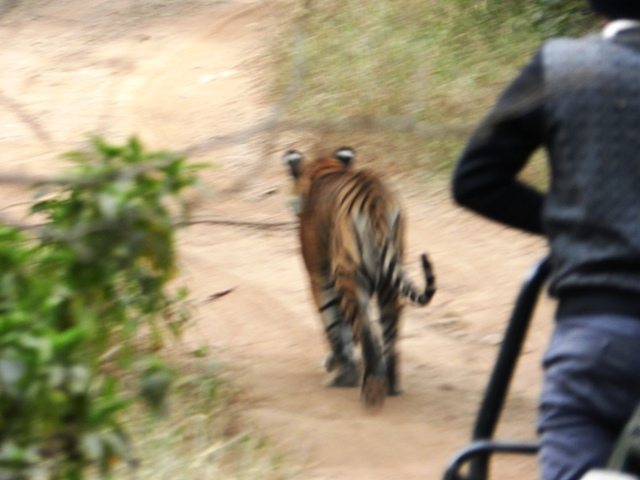 Fading Out of Sight 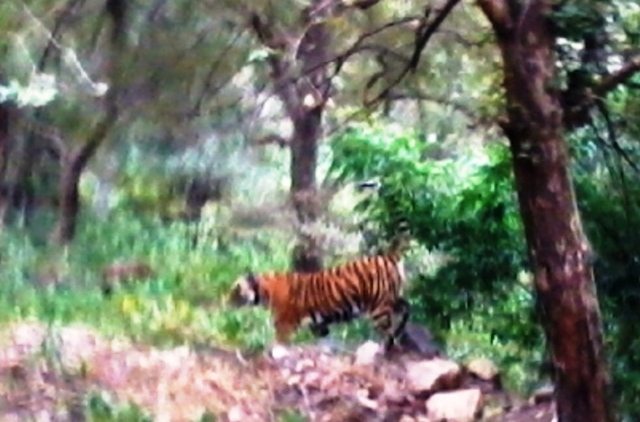 In less than a couple of minutes the magnificent view of the exquisite RBT faded away in the camouflage of nature however, I was still lost in the charismatic illusion of the royal creature. It was a blessing to see & experience the presence of the beast so close and walking away humbly without bothering our presence. With the kind of indifference towards our presence, almost obstructing her way, I can surely say that Tigers are certainly harmless towards humans rather we are wilder and harm those innocent wonderful creatures sinfully. With this precious moment achieved in my life, I feel proud to have grown more passionate and respectful for wildlife.

In my more than 20 attempts in different parks and sanctuaries throughout the nation, I could see my first ever big cat, a Leopard in Gir in November 2013, but that was only for a fraction, from as far as 50 meters. Sighting the RBT at a handshaking distance was an immense thrill, a proud moment and a life time achievement.

I am very grateful to our driver and guide for their patience and persistent immaculate service due to which we were blessed with the exclusive sighting. It was 5.30 pm by the time we reached the exit gate and registered the first sighting of the week, on the sighting register on 01.01.2014. I feel this was my best New Year celebration in my life.

The collective efforts by everyone dependent or deployed in the park seems doing their best. Since the successful relocation of the Tigers from Ranthambhor, remarkable developments have been noted and even few cubs have been reported born and surviving in the park. A 24 hour tracking system has definitely reduced the poaching proneness and locals’ participation in the project has only added charm to the park thus regaining its popularity and lift in their economy. Chances of Sighting the RBT is now maximum in Sariska than in any other reserve in the country.