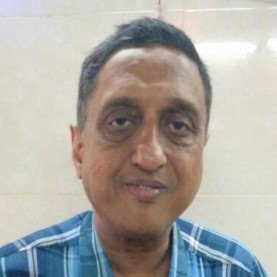 Tonight, though, the crowds were huge, and we had to really hunt for a good place in which to relax. Our successful location of a nice spot turned out to be a not-so-nice one after all as a police van landed within 15 minutes and started blowing all the on-board horns and sirens. In tandem with them, foot-soldiers began to ask everyone to get up and take themselves elsewhere. We got up, moved a little way off, and waited for the police car and the troops to move before returning to the spot where we had lain a few minutes earlier. This kind of ritual was repeated once, but we managed to remain at the same spot for a few more sessions of prayer. In between, a Saudi guy came and handed over a pizza pack to Dr. Naheed. We all partook some of the pizza and found it hot and fresh. I also visited the Al Baik outlet (to buy some chicken) , but returned as the queues were very, very long.

At about half past two, we left Mina and returned to our hotel in Makkah.

In reality, we returned to our hotel room in Makkah and snatched a little sleep before dawn. After the Fajr prayers, we proceeded to go to Mina, which is about 2 km away. Just ahead of Mina is the “Jamarat” or the place where the three “devils” are located. Before I describe this, let me say that stoning of the three devils is a ritual more to remember and praise Allah than to actually denounce the devils.

The route to Jamarat goes through a tunnel that is over a kilometer long. This tunnel was full of devotees right in the morning; only police and emergency vehicles are allowed to pass (and some motorcycles, which had one Saudi and one pilgrim … a private arrangement where the Saudi earns some quick bucks). We also saw several guys with wheel-chairs for hire; they ferried the willing pilgrims to Mina for 50 Saudi Riyals. However, theirs is an illegal enterprise, and we frequently saw the police blocking them and asking the pilgrims to “disembark”. However, the thing I wish to say is … the road to Mina, and beyond, to the Jamarat, is easily traversed as you are walking with hundreds of others. We went past the tunnel, and via a busy but narrow road, we finally reached Mina.

My co-passengers were all as tired as I was; one of my friends brought some food, and invited me to share it with him, which I did. We prayed the Dhuhr prayers, and then went to the Holy Mosque to perform the ARRIVAL circumambulation (7 rounds around the Holy Kaa’ba). I continued after this to also complete 7 lengthwise walks between Safaa and Marwah.

A trip to Makkah normally takes about three hours, give or take. The actual distance from my village to it is about 290 km. This night, though, we took over ten hours to reach Makkah, and over 16 hours to finally reach the hotel rooms where we would all be staying. I would tell you all the sordid details, but suffice it to know that our agent had arranged the whole trip ILLEGALLY … that is, there was no payment made to the Government of Saudi Arabia for performance of a legal journey. We were performing Hajj at a very low cost … the cost would include the transportation to Makkah and the return from it, and the 11-persons-per-room stay in a hotel in Makkah. Food, internal travelling, comforts etc. were EXCLUDED. Of course, the organiser’s huge profit margin was INCLUDED in the 1800 Saudi Riyals per person package!

As we were not official pilgrims, the police stopped our bus at many places. At one spot, we were immediately directed to the opposite side and asked to return to Ta’if, the city from which we had just left; we tried to re-negotiate this barricade, and failed again. Then, in a burst of creativity, one of my co-passengers simply shifted one of the barricades aside and we drove past it, out of sight of the police! Ahead, as night deepened, most of us went off to sleep. The bus plodded on, inch by inch, as it neared Makkah. At the break of dawn, the driver woke us all and asked us to get off the bus, while he tried to get the bus past yet another police barricade. We got off, and walked past the lingering police with hundreds of other pilgrims in a similar predicament. Finding some flat, even ground on the side of the road, we all plopped there to await the bus that would come to pick us up. It was another two hours before it did. In the meantime, night turned into day and the sun climbed up, changing the weather from a balmy, warm one into an uncomfortable, hot one.

I went in a private taxi, to see a natural geographic formation that is located near my place of work in Al Muwayh. This place is called the Al Wabah (Maqla Tamia in Arabic). It is a volcanic crater located on the western edge of the Hafer Kishb basaltic plateau that contains many volcanic cones.

Time to tell you about the mammals that we saw They include the famous Arabian Oryx, the Reem Gazelle and the Idni Gazelle. The Oryx is a long-horned animal that is feared for its ability to kill with its horns. However, within the reserve, it is remarkably docile as it has been trained to expect food and water at appointed times. At the time of writing this, there are more than 650 of these animals in the As-said reserve. According to Mr. Moayyed, the reserve is already full to above its capacity to hold these animals, and it only because of the controlled conditions that the animals are able to survive, thrive and breed over here.

Rajendra Ovalekar recounted how he and his brother, assisted by other family members, decided to develop a butterfly park privately. They owned these 2 acres of land in Ovale village, and, as Rajendra reminisces, he was always awed by the colours and varieties of butterflies as a young adult. He decided that he would do something about this after his viewing of these beautiful fliers during some of the nature trips he undertook on behalf of the Bombay Natural History Society in the early 2000’s

Mecca is and will always remain one of the most popular destinations for more than two billion people of the planet. I have attempted to demystify the city and open its heart so that they (the people) may understand a little of its piety and glory even if only by proxy.

Jeddah has cityscapes on a large scale. Not for this city the narrow crowded bylanes of Mumbai; here, every street is built on a grand scale. Most streets (barring streets in old Jeddah and inside residential areas) are at least 8-10 lanes in width, with broad footpaths. There are bridges and under-passes, service roads on the side, and so on, in addition to the main thoroughfare. During most visits, in spite of using Google Maps and Navigation, I ended up getting on to the wrong ramp, or driving past a turn or missing a U-turn and having to drive an extra 5-10 kms to get back to where I wished to go.

It was almost noon when I finished scouting the area. There was an Afghani restaurant here, so I decided to have my lunch here. They served me Alu Palak, and it was really delicious, so I ended up ordering some take-aways in the form of an extra plate of alu palak, and a plate of a chicken curry. I then went to meet Dr. Deepti Chauhan, a Mumbai-based Ophthalmologist who has recently come to Riyadh for a short 3-month assignment to work in the King Faisal Specialist Eye Hospital; we had been in touch by phone through a mutual friend, as she needed guidance on how to manage one’s life in Saudi Arabia, esp. as she would be travelling and staying here as a single woman.