MAKKAH/MINA: Day 4 of our journey/11th of Dhul-Hajj month of the Islamic calendar:
On this day, and the following day, the aim of the pilgrim is to –
a) continue praying as much as possible
b) visit Jamarat after the afternoon salah (namaaz) and throw stones not just at the large devil, but also at the other two devils; in fact, one starts from the “little devil” and progresses from there towards the large devil.
c) one has to go to the Holy Mosque and do a Tawaaf-al-Vida (a Farewell ritual) on the last day before one leaves Makkah.
d) One has to go to Mina after Maghrib to stay there for part of the night, as we did on day 3.

In fact, because of the relatively free mornings, we could get proper sleep. As before, we ate little food and drank even less milk so as to avoid the need to visit the loo often. I did manage to eat some food, though, and especially relished fried chicken with rice, the way Arabs eat chicken. As the food was purchased from a neighbouring eatery, it was fresh when hauled to my room, and I shared it with a few of the other room-mates. After the Dhuhr prayers, we went to the Jamarat to stone the three devils; Each devil had to be stoned seven times … which means we would need exactly 21 stones to do the deed on three devils; I carried the requisite amount of stones in my belt pouch, and marveled when I discovered that I had, in fact, brought the right number of stones, and had not lost any on the way! The walk to Jamarat and the walk back to our room took up more than a few hours, and the crowds were much larger today. In fact, when we reached the 2nd floor of the Jamarat building, we had to wait for about half an hour while the police arranged everything for the rites to be performed. The adhaan (call to prayers) occurred while we waited, and it was about 15 minutes after this that the barricades were opened and the pilgrims surged inside to reach the row of devils that they (i.e., we) were to stone today. After this was done, we returned to our rooms to pray the Asr’ and the Maghrib and Ishaa prayers. At about 9:00 p.m., we set off for Mina to spend the next several hours there. This time, Faisal brought his entire family – i.e. his wife Dr. Naheed, their two children, and Dr. Naheed’s mother, who was also with us. I had purchased a foldable mat (S.R. 10/=), which I now used to lie down for the evening/night when we had selected a spot. Dr. Sadia, one of the residents who is at Al Muwayh hospital was also with us, and hence we were a fairly large group.

Tonight, though, the crowds were huge, and we had to really hunt for a good place in which to relax. Our successful location of a nice spot turned out to be a not-so-nice one after all as a police van landed within 15 minutes and started blowing all the on-board horns and sirens. In tandem with them, foot-soldiers began to ask everyone to get up and take themselves elsewhere. We got up, moved a little way off, and waited for the police car and the troops to move before returning to the spot where we had lain a few minutes earlier. This kind of ritual was repeated once, but we managed to remain at the same spot for a few more sessions of prayer. In between, a Saudi guy came and handed over a pizza pack to Dr. Naheed. We all partook some of the pizza and found it hot and fresh. I also visited the Al Baik outlet (to buy some chicken) , but returned as the queues were very, very long.

At about half past two, we left Mina and returned to our hotel in Makkah.

Today was to be the last day of our stay in Makkah, and hence, a visit to the Holy Mosque to perform the final farewell circumambulations was compulsory. Late in the morning, I left with some of my friends to the Jamarat to stone the devils for the last time. Readers will re-collect that I had collected 49 stones from Muzdalifah on the second night; I had already used 7 on the 10th of the month to stone the big devil, and another 21 to stone all the three devils on the 4th afternoon, i.e. yesterday. I now had exactly 21 stones to throw, 7 at each of the three devils. The ritual took less time than it had taken on the previous day, but it was basically a repeat of the experience we had already had.

In the evening, I went back to the Holy Mosque to perform the final circumambulation of the Kaaba. This time, the crowds were really HUGE, so I decided to do the circuit from the 2nd floor of the surrounding mosque structure; this, in fact, is the terrace of the structure, and it was a pleasant experience to walk around. From the top, one can look down upon the crowds going around the Kaaba. The walk is much longer than the one that one can take from the ground floor, but as the crowds are less, one can perform the circuit much faster. One has to be careful here, though, as all those who use wheel-chairs or are brought on wheel-chairs (the old, the infirm and the challenged) use this terrace area for their circumambulation. 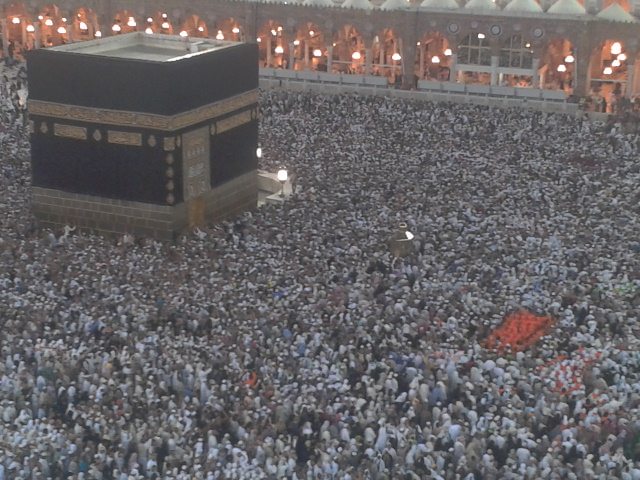 After this ritual, we left, met each other outside, and walked to where our bus was waiting to take us back to our village.. On the way, we had tea/snacks at some of the stalls that were lined up. Here, we met Dr. Gofran, one of the residents I work with at the hospital. He was with his wife and his two children, both of whom were really cute, Presently, after a walk of over 2 km, we reached the place where our bus was parked. We finally left at about eight thirty p.m. The return journey was not as slow as the arrival journey had been.

It was at about half past one in the morning that we finally touched Al Muwayh, and another half hour before I reached my home and went to sleep, almost immediately.

A short installment to follow will sum up the entire pilgrimage and what effect it has had on me ….