This is the final installment of my trip to Riyadh. If you need to go back to the earlier posts in this series, please see the list above.

Today, I decided to go to “Old Diriyah” district, which is listed as a heritage area of Riyadh. Fortunately, this district is only 6 km from my hotel. I searched Google maps with GPS to see how to reach there, and kept the GPS on till I was actually at my destination. I was expecting some ruins or castles … or something equally interesting or romantic. In the event, the visit turned out to be a damp squid. The reason is that their so-called “old houses” look more or less like today’s houses in Indian villages! In fact, old Diriyah wasn’t even a defunct or relic area. It is a thriving area with residents, restaurants, and all the other similar things that cities have!

It was almost noon when I finished scouting the area. There was an Afghani restaurant here, so I decided to have my lunch here. They served me Alu Palak, and it was really delicious, so I ended up ordering some take-aways in the form of an extra plate of alu palak, and a plate of a chicken curry. I then went to meet Dr. Deepti Chauhan, a Mumbai-based Ophthalmologist who has recently come to Riyadh for a short 3-month assignment to work in the King Faisal Specialist Eye Hospital; we had been in touch by phone through a mutual friend, as she needed guidance on how to manage one’s life in Saudi Arabia, esp. as she would be travelling and staying here as a single woman.

In any case, she and I set up a rendezvous to meet at the hospital itself. Accordingly, I went to KFSEH, reaching there at around 3 p.m. The hospital is set amidst picturesque landscaping which includes aesthetically designed buildings, manicured lawns and large water pools with flowing water and sprinkling fountains. Take a look: 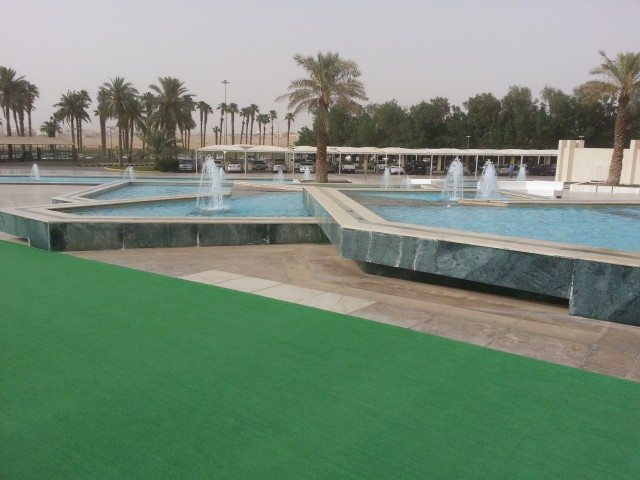 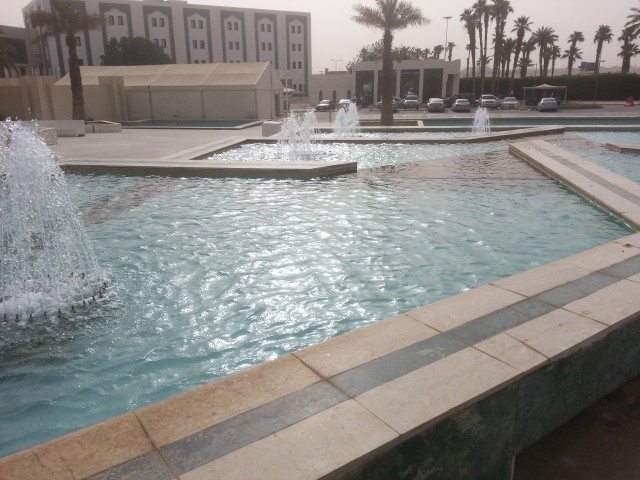 We met in the reception area of one of the buildings where she has her office. Dr. Deepti is a down-to-earth eye surgeon with over 16 years (I hope I got this right) of experience in Mumbai, India.

She told me she had accepted this assignment for two reasons; one of them was the fact that it seemed the right thing to do to improve her C.V. The second reason was that the interviewers actually persuaded her to accept the post as she has a British qualification, the MRC Opth. It was nice talking to her and getting to know her perspective. Having had a good deal of chat with her, we parted, and I returned to the hotel.

In the evening, after the Maghrib prayers, I decided to go to another area of Riyadh known as Malaz. A couple of Indian servants in the hotel recommended that I go there to buy old audio cassettes. (I’ve been looking for pre-recorded old cassettes to play in the audio system of my old, old car). As it turns out, the long ride of over 20 kms proved to be mostly useless. There were a few cassette shops here, but none that had old cassettes – well, actually, I didn’t see any, but was told thus by an Indian pedestrian who I stopped on his way to ask about my need.

I was a little annoyed, but not overly so, and I brightened up the evening with some shopping for jalebi and breads in a bakery shop in one of the side lanes. Next, I called up Mohamed Siddiqui (about whom I have written in an earlier post in my Riyadh series), and asked him where I could get these audio cassettes. He told me very clearly that Malaz was the wrong place to look for old Hindi songs cassettes, and countered with an instant invitation for me to go to Lulu’s Hypermarket (owned by a Keralite) where he was with his family, and also invited me to join him for dinner. I was pleasantly shocked! I agreed to go where he asked me to go, and after a drive full of wrong turns and utter confusion, I made it to the mall.

It is a huge mall and has an enviable reputation among the malls of Riyadh of selling Indian goods and masalas. I met Mohamed on the first floor. He had with him his wife, his children and a nephew and niece. 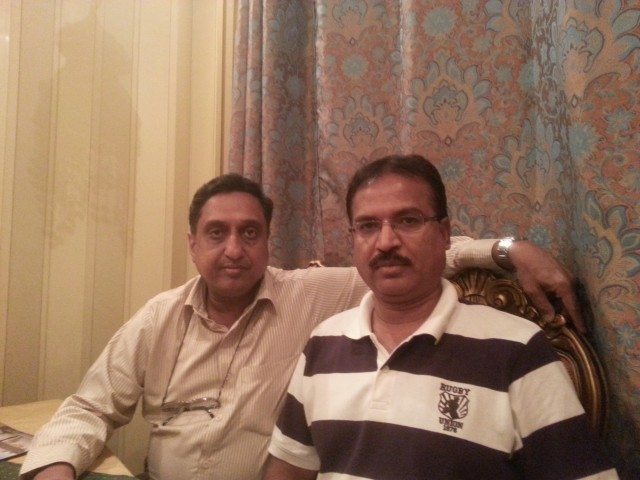 They were all waiting to enter a quaint Indian restaurant called the “Durbar” Restaurant. We hugged each other and he introduced me to his wife, his son and daughter (both teenagers) and two kids who are his nephew/niece. After a wait of about 15 minutes (during which I went out and strolled down to the basement where the “bazaar” is located. There was a bewildering array of Indian stuff, and hundreds of Keralite customers browsing the mall!) we were shown a table, and the food arrived after an hour. We had a tandoori platter, followed by butter chicken and Chicken 65 with rotis/kulcha, and then biryani/fried rice.

Mohamed Siddiqui has been in the kingdom for nearly 2 decades; he works with the Saudi Telecom Company (STC) in a non-technical capacity and is worried that he may have to go as the company has started trimming staff. However, he kept up the banter and made me very comfortable with his family members, who are going to stay with him only until mid-June, when they have to return to India on account of the schooling of his children.

After the dinner, we decided that I should go to his home where he would hand over to me some audio cassettes that he had with him and which he was no longer using. Great, I said, and we all walked to our car, only to discover that I had forgotten to turn off the headlights, and as a result, the battery had drained off completely. I was shocked. Mohamed and I requested a couple of cabbies to help us recharge the battery, and with the cabbie in the driver’s seat, and the two of us pushing the car, we managed to re-start the battery after about half an hour. In the meantime, his family had already left for their home in a cab. I took Mohamed to his house, which was only 10 minutes’ away, and he made good his promise to hand me some audio-cassettes. We parted then, and I returned to my hotel by around mid-night.

Tonight would be my last night in Riyadh, and I would drive back to Al Muwayh the next day, listening to some very pleasant songs by Kishore Kumar and all the rest of the golden voices from India.

En route, I made just two or three halts, twice for mental relaxation and imbibing tea, and once at Al Khasra for lunch. My return journey was as peaceful, if not more, than my journey to Riyadh five days before. I checked out of the hotel at half past eleven, and reached my home in Al Muwayh at half past six. All in all, it had been a memorable journey.

Once in a while you come across a trivia or a fact that makes you think….why was this story hidden for so long?? Really..is…