Readers who have come across my previous articles on traveling within Saudi Arabia may be a bit more comfortable reading about yet another new place of interest within the Kingdom. For new readers or those apprehensive of visiting this country, here is a pointer: although immigration and other formalities of travel to this country are daunting, nay, even discouraging, millions of pilgrims travel every year to this country to visit Mecca and Medina.

To such travelers, as well as those who go to this country on other matters like jobs, business or politics, let me say that, like any other country on the world map, Saudi Arabia, too, has several interesting places to visit. If you are among those who have the time to see this nation and its “hatke” beauty, I recommend a read, a study, and a visit to today’s location: the Al Wabah crater.

I had read about this place while searching for places of tourist interest within the Kingdom. To those who are not aware, let me inform that I am currently residing in Al Muwayh, a small village with a population of just over 5000. I work in the Government’s hospital there as a Pediatrician, but my love of traveling and discovering new places leads me to search for challenges and so on over the internet. My visit to Al Wabah materialized as a result of one of these searches.

Thus it was that on Friday, 16th June 2012, I went in a private taxi, to see a natural geographic formation that is located near my place of work in Al Muwayh. This place is called the Al Wabah (Maqla Tamia in Arabic). It is a volcanic crater located on the western edge of the Hafer Kishb basaltic plateau that contains many volcanic cones. To reach there, one has to leave Al Muwayh and follow the highway that goes on to T’aif.

About 35 km from Al Muwayh, one approaches a bridge that points to a village called Umm-Adoom. One climbs the ramp, then follows the right path, reaching Umm-Adoom after about 31 km. Ahead, this road would finally terminate at Medina, about 400 km away. However, about 60 km ahead of the village, one reaches a brown-colored board that points to a right turn that ends at the Al Wabah. Total distance from my village to Al Wabah is, therefore, a little over 130 km. 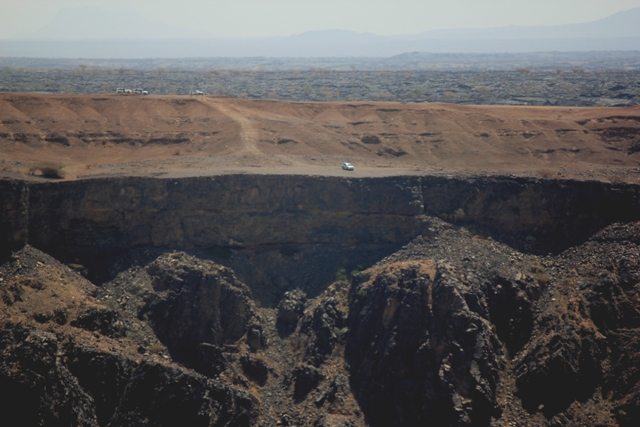 The Al Wabah crater; the northern rim is visible across the chasm, with some visitors.

We left Al Muwayh at half past eight in the morning, and reached the location at about ten o’clock. Al Wabah is, as Wikipedia puts it (see this link), a maar crater, a formation caused by what is called a “phreatic eruption”. This means that, sometime in the past, the ground caved in when there occurred a massive steam explosion generated by molten basaltic magma coming in contact with subterranean water. We approached the rim of the crater from its southern side, though the northern side was also visible across the chasm. 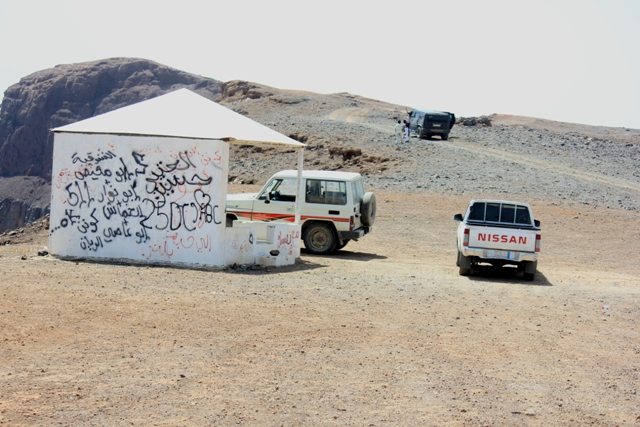 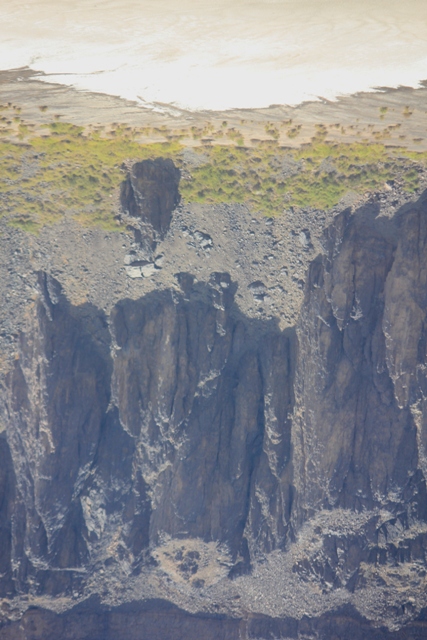 The northern rim with vegetation

The crater is 500 m deep, and most of its walls are steep, some sheer rock, and others, gravelly and very difficult to climb down/up without expertise. The rim has a diameter of 2 km. There is evidence of vegetation all around the rim, but especially at the northern end. The sides have stumps of date trees that failed to propagate. The floor of the crater is a smooth patina of white that is formed of sodium phosphate crystals.

A close-up of the far rim 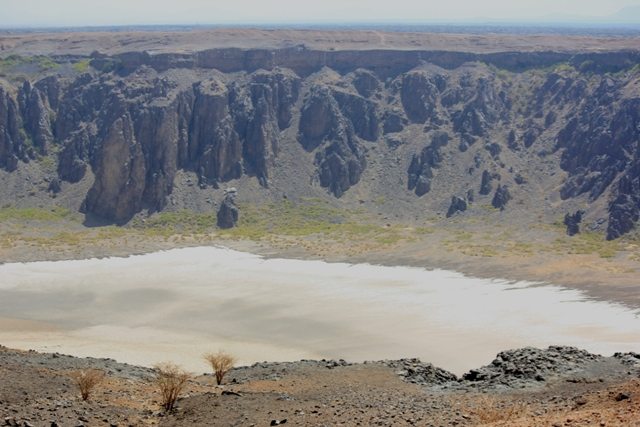 The appearance is of dried up water, which is what it actually is. Many people have successfully gone down to the bottom of the crater. It is reported that there, at the bottom, one is totally isolated from the world; mobile signals are not available either.

The climb is quite precipitous, except, I was told, down a designated path on the northern side, which I did not visit. One of my friends recounted how his friends and he had gone down from the southern end, taking about 2 hours to reach the bottom, and about 4 to climb back up. I daresay, the thought of going down never crossed my mind. 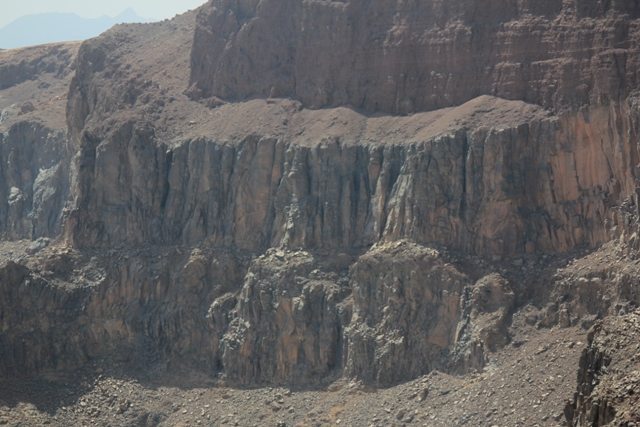 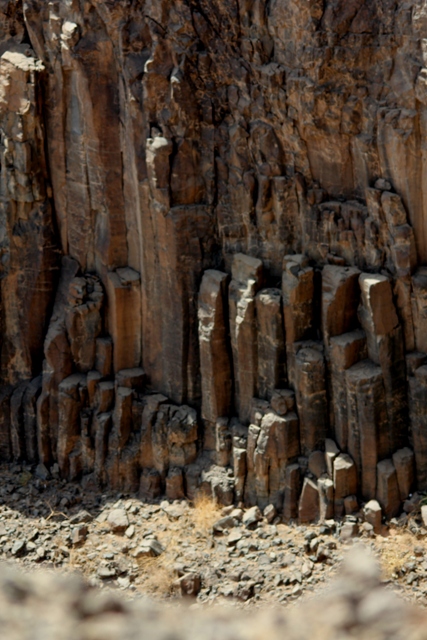 Would you think that was scalable without expertise?

This close-up shows the water-like appearance/texture of the ground filled with runnels. 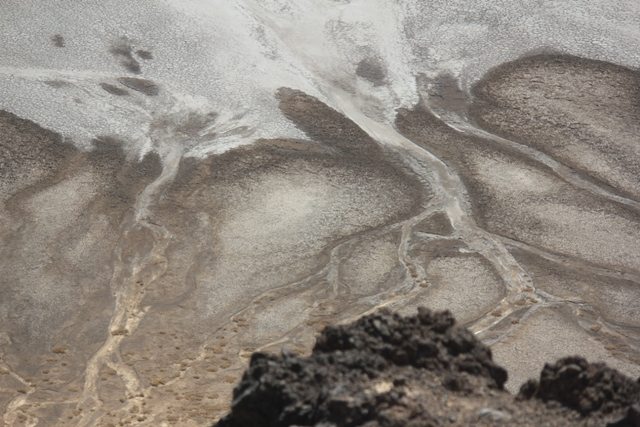 My taxi driver Khalid and I stayed there, taking photographs and generally absorbing in the desolate nature and the immense beauty of this place for about half an hour or so. As there are no food stalls or other diversions, one cannot picnic out here, so, after I had shot my photos, we left, and returned to Al Muwayh just around noon. It had been a morning well spent. 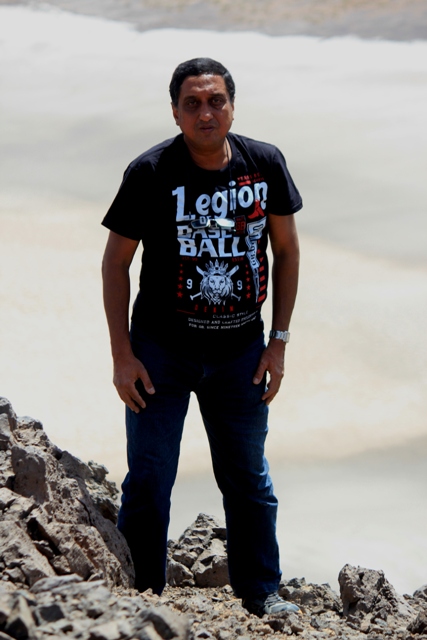