MINA: Day 3 of our journey/10th of Dhul-Hajj month of the Islamic Calendar:

In reality, we returned to our hotel room in Makkah and snatched a little sleep before dawn. After the Fajr prayers, we proceeded to go to Mina, which is about 2 km away. Just ahead of Mina is the “Jamarat” or the place where the three “devils” are located. Before I describe this, let me say that stoning of the three devils is a ritual more to remember and praise Allah than to actually denounce the devils.

The route to Jamarat goes through a tunnel that is over a kilometer long. This tunnel was full of devotees right in the morning; only police and emergency vehicles are allowed to pass (and some motorcycles, which had one Saudi and one pilgrim … a private arrangement where the Saudi earns some quick bucks). We also saw several guys with wheel-chairs for hire; they ferried the willing pilgrims to Mina for 50 Saudi Riyals. However, theirs is an illegal enterprise, and we frequently saw the police blocking them and asking the pilgrims to “disembark”. However, the thing I wish to say is … the road to Mina, and beyond, to the Jamarat, is easily traversed as you are walking with hundreds of others. We went past the tunnel, and via a busy but narrow road, we finally reached Mina. 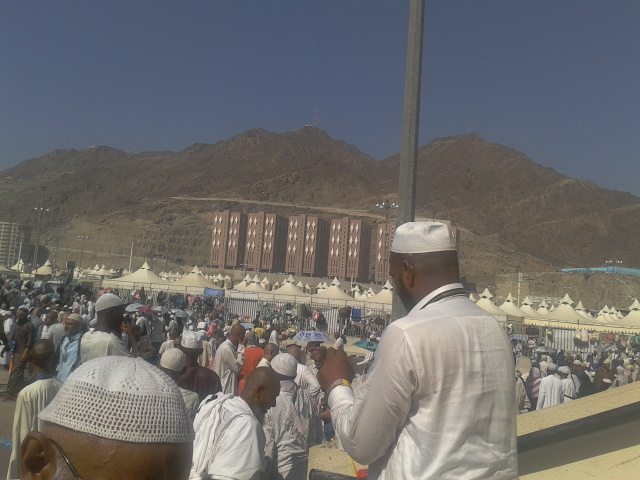 A panoramic view of Mina

This is a town that sports thousands of tents, where Hajj pilgrims must stay for at least two nights, the 11th and the 12th of Dhul-Hajj month (more on this later). Past the bustling town of Mina, one reaches a huge building complex that has the huge stone columns that represent the three devils. The four-storey complex is reached from different directions, and all the upper floors are centrally air-conditioned. The “devils” are tall columns of stone that start at the ground floor and are identical in shape and size through all the upper floors. You pass the “small” devil first, then the middle one and finally the “large” one. 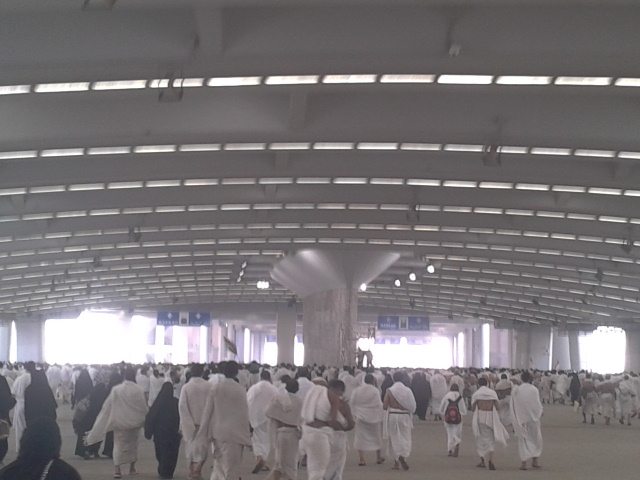 A view of pilgrims proceeding to stone the devil

Today, the ritual required one to just stone the large devil. Hence, we went past the first two columns and launched seven stones, one after the other, reciting “Allah-o-Akbar” with each throw of a stone, at the stone column before us. 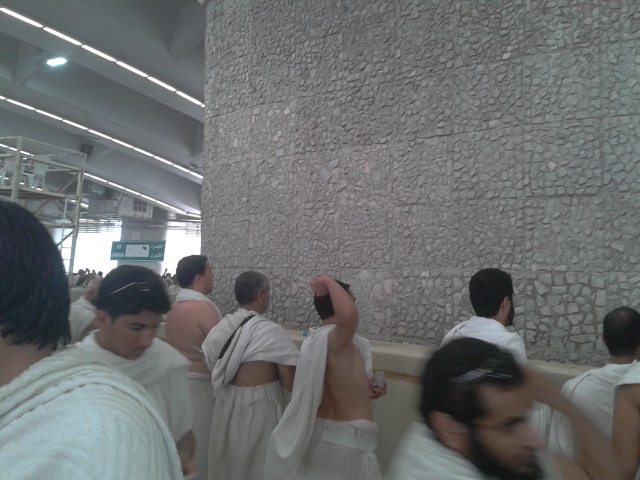 Stoning the “big” Devil at the Jamarat

This ritual hardly took five minutes. Thereafter, if one can, one must “sacrifice” an animal. I had pre-arranged for the sacrifice to be done in Mumbai through my family, so there was nothing to be done here. However, some of my colleagues went to designated counters and paid a pre-set amount of Riyals (450 per person, I think) to register their sacrifice. Thus, the pilgrim himself/herself does not actually knife the animal. It is done by the Saudi governmental agency, and the meat is distributed among the needy people in several countries where deprived people stay (usually among Muslims).

After the sacrifice, the males among us went to shave our heads, but found the salons full. Eventually, we returned to the hotel, prayed the afternoon salah, and went to the barber nearby and got tonsured by about 4:00 p.m. 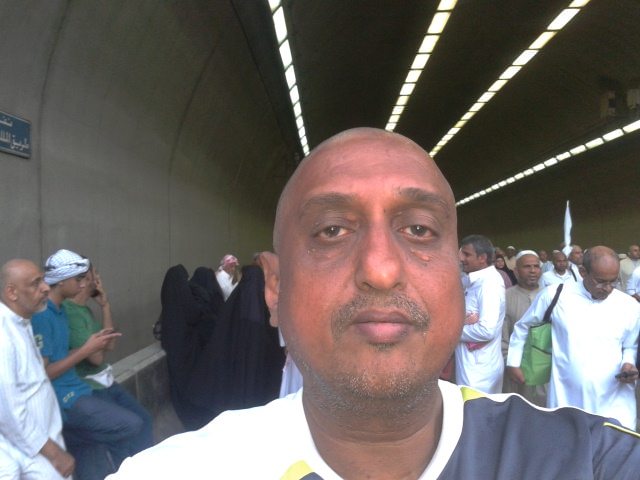 In the tunnel to Mina after my head-shave.

Once this is done, you may remove the special two-piece garment that you had to compulsorily wear for the previous two and a half days (the ehram). This done (I changed into a tee-shirt and a pair of loose trousers), I went to the Holy Mosque to perform the second set of seven circumambulations … this is the Tawaaf-e-ziyarat, and it is mandatory to perform this.

This done, I then proceeded with some of my colleagues, to go back to Mina to spend the night. This ritual is also one of the mandatory ones. Spending the night at Mina and praying through it is a requirement that must be fulfilled or a sacrifice has to be done in lieu of it. My partner for this venture was my colleague Dr. Naheed’s husband, Mr. Faisal. We reached Mina at a little later than 10 p.m. The roads were full of several illegal pilgrims like us who had brought with them cheap plastic floor-spreads and various other types of material on which to sit or sleep. As we had none of these things, we picked up some old water-bottle cartons, opened them up to make a “mat” for ourselves, and found a place on the road where we would stay for as long as possible.

It wasn’t easy, as the police came again and again and forced the people to get up and leave. A police jeep with the worst possible sirens would arrive, and the man within would use a loud-speaker to ask people to get up. Along with this jeep, there would descend on the crowd several young and brash policemen (probably in their late teens or early twenties) and they would wake up sleeping pilgrims or stir those already awake and ask them to leave. I decided to argue with one of these with rationality: where do they expect the thousands of us to go. When he replied that there were tents where we could go, I reminded him that the tents were for those who had come legally, and in any case, there was no place in Mina to set up tents for so many others! Also, I questioned their basic step of trying to clear a road that, in any case, was out of bounds for all vehicles! He seemed to understand my broken Arabic, and after a few more futile attempts, the police left.

Faisal and I stayed until about 1:00 a.m., then we left to return to our hotel back in Makkah. Soon, I went to sleep till about half past one. After this, we got up, dusted ourselves, and walked back to the hotel to await the morning of the 11th day of Dhul Hajj.

Got up at 7.30 AM. Checked the engine oil in our bikes and found that engine oil level in Hunk was very low. Asked the locals about any spare parts shop around and got to know that we can find one in Dharampur. Started our bikes again at 9.30 AM and moved on to see the very famous ‘Monkey Point’. Harmeet’s Hunk was loaded with 3 heavy bags as he had plans to stay at Baru Sahib. We reached Monkey point and got to know that we will have to trek and bags were not allowed. There was no place available where could keep our bags so had to drop the plan for ‘Monkey Point’. After that, we reached ‘Sunset point’. It was really an amazing place with a lot of breathtaking views. It was greenery all around and completely quiet place. Just the sound of birds. Just feel the fresh air and feels like you are in heaven. It was a very nice experience. After spending some time, enjoying the beauty of nature, we went to the market to have lunch. Had Chinese food at a shop but the food we had there was pathetic. I never had such food in my life. We left from there and decided to go to Shimla and then Kufri from there. Left from Kasauli at 3 PM. While on our way back, I started feeling sick and suffered from indigestion and gastric problems due to the food that we had. Reached Solan as Harmeet had to buy engine oil for his Hunk. Got the engine oil from Chambaghat near Solan. I was still not feeling well. Took a tablet of Pantop-D and we then decided to go to Baru Sahib due to health issues. Way to Baru Sahib was the worst one. Baru Sahib is located 70 kms away from Solan.