To those who do not know me, my name is Taher and I am a Pediatrician who has recently joined as a doctor for the Ministry of Health of the Kingdom of Saudi Arabia. I moved to this country in mid-November 2011, and, believe me, the move was neither smooth nor easy. However, Lady Luck has been looking after me, and so, here I am, all settled in a small village called Al Muwayh, located deep inside the country; a place that has summer temperatures crossing 50 degrees Celsius and winter temperatures dipping almost to zero. I have lived through their winter, and I can say with confidence that I am not very keenly looking forward to when the sun bakes the land in June/July/August of this year.

Saudi Arabia, to most Indian citizens who have never been there or thought of going there, is a land where Muslims go to perform their Hajj pilgrimage. It is also known to Indians as a nation that has a lot of mineral and petroleum reserves, and as a country that the United States of America nurtures with care and diplomacy. Others consider this country in a less than positive light, as Saudians are known to be radically different from all the other nationalities in the Gulf. My own experience with this nation has been a mixed one, and those desirous of learning more about my overall experience may either read my weblog (http://drtaherofarabia.blogspot.com) or write to me through this site.

Over the past 4 months of my stay, my living was fairly circumscribed and there was nothing really that I could do to enrich my soul. The reason is not too far to seek: like other Indian citizens, I, too, thought of Saudi Arabia as a dry, uninteresting country, and hence, never even thought to research this land to see if there was any tourism-related activity here. My past visits to the cities of Ta’if and Jeddah have already showed me that there is cosmopolitanism even in this highly orthodox nation; that there is variety, interesting tourist spots, interesting cuisine, fascinating places and malls to go and buy things, etc.
I had come to know Mr. Moayyed, a Pakistani employee working with the Ministry of Environment of the Kingdom, about a month after I landed in Al Muwayh. On this first meeting, I had told him of my keen interest in Nature and its multifarious manifestations on Planet Earth. The trip I made on the 15th of March 2012 is the result of my diligent perseverance with the request that he take me to one of the Wildlife Reserves dotted on the maps of this region.

Thus it was that we landed at the Mahazat As-Said Wildlife Reserve on the morning of the 15th. Mahazat is the name of the area. This is the second biggest pan-circumferenced protected reserve in the whole world (the first is the Kruger Park in South Africa). Spread over an area of 2250 sq. km., the desert terrain is home to over 250 varieties of birds, hundreds of invertebrates and 12 species of mammals. Many of the mammals here were indigenous to Saudi Arabia, but were decimated in the past, thanks to the widespread hobby of hunting. These have been re-introduced to the kingdom (they never got extinct, but were run down to extremely small numbers).    To reach the reserve, one can go from the Al Muwayh side, where one just needs to cross over to the South end of Al Muwayh. A padlocked door leads to the reserve located within. The main office of the Game Ranger is located at this end, and Mr. Moayyed and his fellow-employees are required to log in their arrival every day. We, however, entered the park from its other side, which is about 50 km away to the south. One goes by road towards Ta’if, and climbs the relevant overpass to cross over to the Southern side, where one drives about 5 km inside to reach the padlocked gate of the reserve. Moayyed took with him rations to make breakfast for us – that is, his friend, the restaurant owner from Muwayh, me, and himself, along with one of the park employees whom we would meet inside.    To be honest, I was looking forward to this visit for the last 2 1/2 months. Mr. Moayyed and I met through the good offices of my friend Dr. Niyaz, an ob-gy doctor working in our hospital. I had expressed my desire to be taken to some such excursion the same day when I learned that he worked for the government in the NWRC. As on that time he was proceeding for a vacation to his homeland in Swat, Pakistan, he had told me that he would organise something after his return. Today’s trip was the culmination of his untiring effort and my determined but gentle persecution of him. 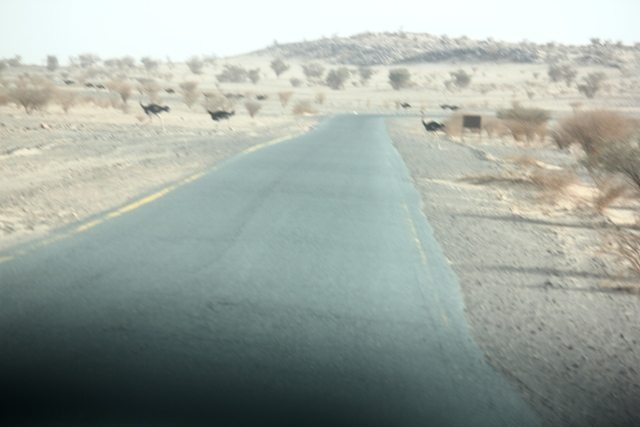 After a 2-minute drive, we saw, in the near distance, a herd of Red-necked Ostriches crossing the road to get to the other side. The sight was simply wonderful. These graceful birds, not native to Saudi Arabia, were introduced many years ago, and theirs is a story of conservation success. As my pictures will tell you, these birds have adapted readily to this terrain, and are, in a sense, domesticated, so that they will approach their care-taker and eat food pellets served by him out of a bowl (see photos below). 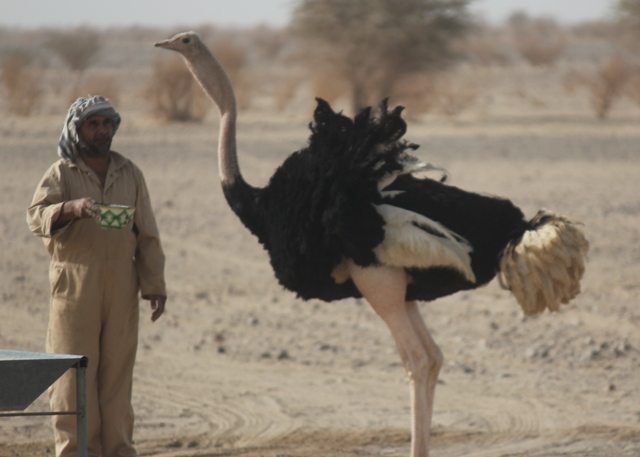 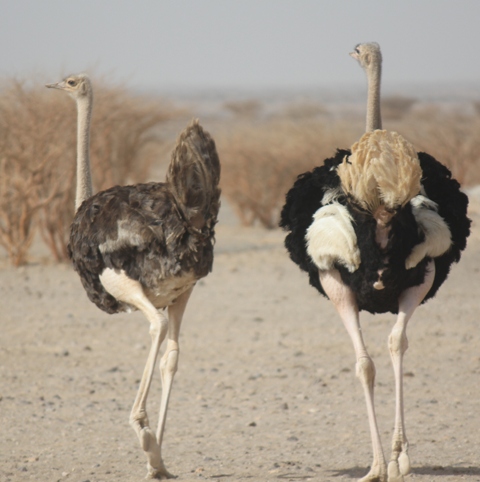 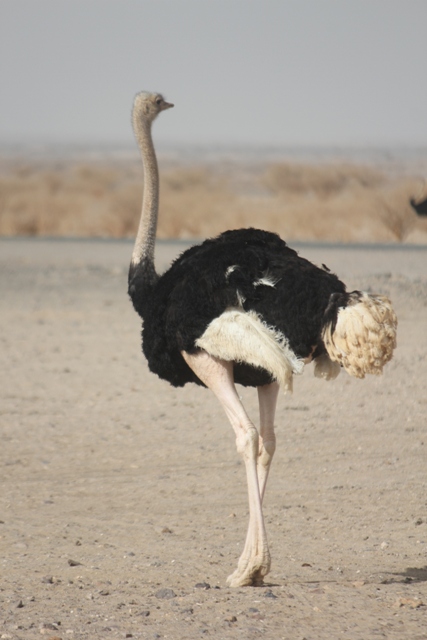 We saw a huge group of these birds in a protected en closure as well, plus several  of them in the open; their movements and behaviour were extremely enjoyable to observe; in particular, the graceful movements of the female of the species, which I have recorded in the few photographs reproduced below for your enjoyment. The next picture shows the female ostrich with her graceful neck movements. 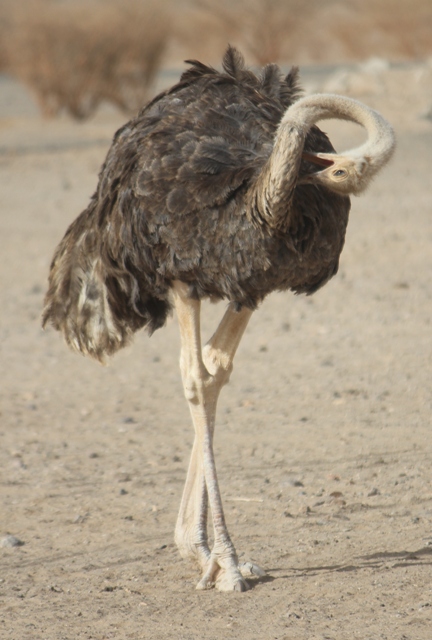 Time to tell you about the mammals that we saw They include the famous Arabian Oryx, the Reem Gazelle and the Idni Gazelle. The Oryx is a long-horned animal that is feared for its ability to kill with its horns. However, within the reserve, it is remarkably docile as it has been trained to expect food and water at appointed times. At the time of writing this, there are more than 650 of these animals in the As-said reserve. According to Mr. Moayyed, the reserve is already full to above its capacity to hold these animals, and it only because of the controlled conditions that the animals are able to survive, thrive and breed over here. For example, last year, they had to destroy the eggs of the red-necked ostriches to keep their population in check!
I was able to watch these graceful mammals from extremely close quarters, and Mr. Moayyed was kind to take the accompanying picture of self with the Oryx in the background. It was a delight to see the animal feeding from a custom-made trough and also to drink water from it. 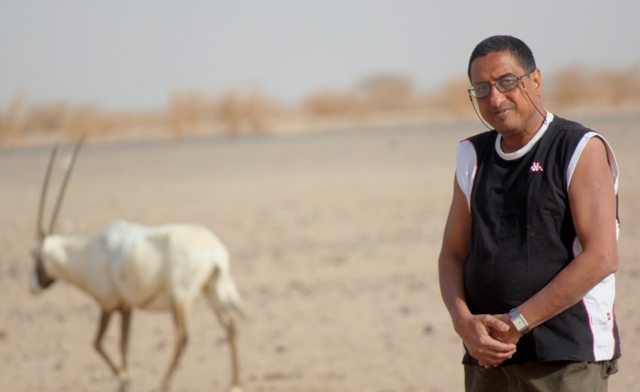 Thats me with a friend in the background 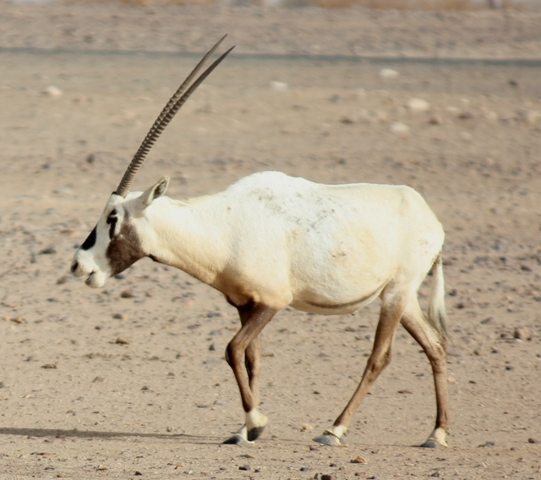 The photos, in fact, do not even do proper justice to their beauty, or show the reader the immense harming potential of those huge, 24-inch horns!

The next pictures are of the two varieties of gazelles I saw here; the first one is of the Reem Gazelle, a hardy, medium-bodied animal, while the rest are of the Idni Gazelle, a more slender-bodied species also referred to as the Mountain Gazelle in these parts. These animals, too, are being nurtured here under the guidance of the expert staff; as one can see in the pictures, the Idni gazelles have been collared so that they can be radio-tracked all over the reserve.    We were told that there are Arabian leopard, Desert Cat and some other mammals too in the reserve, but it is not possible to keep them under the monitor as they are felines, and unlikely to be domesticable to the same degree as the bovine and ungulate mammals that I have just described above.    As Saudi Arabia is a desert country with fickle rains (the As-Said has rains only for a few weeks in April, but the grass that grows thereafter is able to sustain the herbivores for up to seven years, as per Mr. Moayyed’s explanation), protection and provision of special food and water is the most important job     for the conservation organisation that used to be an indepe-ndent NGO earlier, but is funded generously and taken over by the Government some months ago (earlier, the website was called nwrc.org, but now it is a fully loaded governmental site with the suffix .gov.sa). The picture is of the Reem gazelle while the next is that of the Idni gazelle. 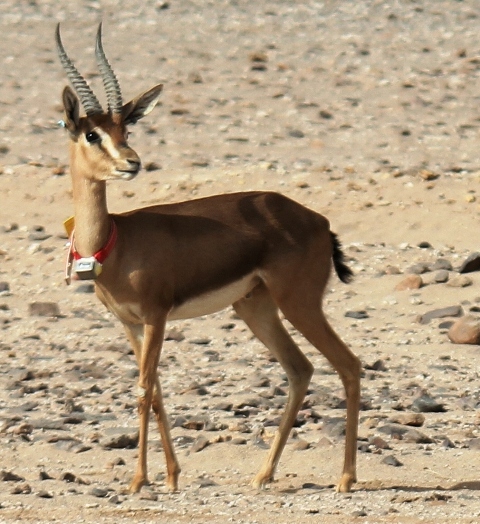 Our trip then took us past a site where they store the dead animal’s skulls, skeletons and so on and take a census of the same; there is a strict rule that one cannot take pictures there, so I cannot share the image with you, but there were skulls and remains of animals that have died over 5 years ago, and even more, as the locals are not allowed to take away carcasses of dead animals, or dying animals either for halal and eating.   We saw a Grey shrike on one of the trees, and I was able to capture some images into my Canon camera, and I reproduce one those for your consumption.

Finally, for the finale, I share pictures of the endangered “Leppet-faced” Vulture. We saw one of these earlier in the morning roosting on the top of a tree as we drove into the reserve. It flew away at that time, but it went over the same hill we rounded later on. We saw perhaps the same bird later, and were able to take pictures of the same as it stood, and as it took off to wherever it wished to fly to.   After this, Mr. Moayyed took us to his onsite center where his men served us breakfast and tea. The trip ended with us moving out towards the Al Muwayh exit of the Reserve. We finally left the grounds at half past ten with happy memories and a promise by Mr. Moayyed to bring us back after the rains had fallen – perhaps after some months. 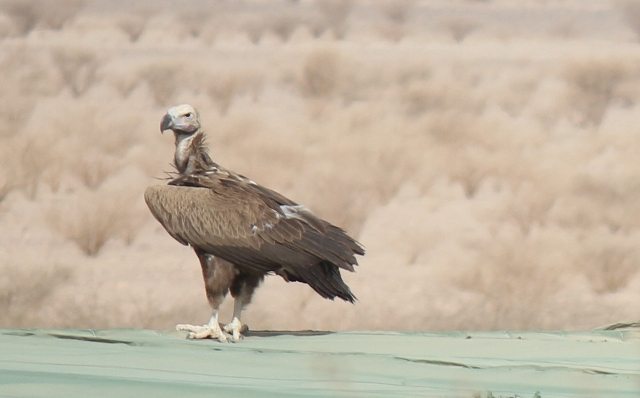 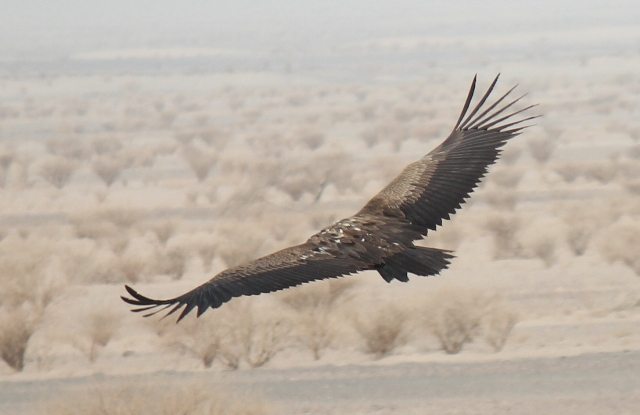 Which brings me, in fact, to the end of this narrative. I hope that you all enjoyed reading this as much as I did writing about this unique experience.
A Visit to the Mahazat As-Said Wildlife Reserve was last modified: November 5th, 2020 by Taher Kagalwala

Who has not heard of Rani Lakshmibai of Jhansi? The last few lines of one of the most recited poetry in Hindi literature composed…