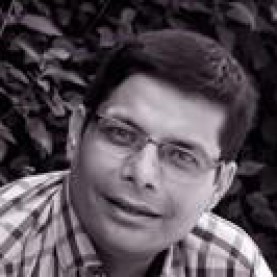 These Bhandars provide tea, snacks, breakfast and hot vegetarian foods to the pilgrims, free. They camp all major places on the way to the Holy Cave to serve hot foods to the pilgrims. A holly attempt, I must say, may be the path, to their belief, to receive grace and blessings of Lord Shiva. The holy songs of Lord Shiva in the tunes of most modern bollywood songs were playing in these Bhandaras and were lifting up the spirits of pilgrims.

“Moromi”, in Assamese means “a loved one”. She was looking at me with her pretty eyes. I could not move further. I felt like I was caught by her looks. First time ever, I felt for a deer like that. It was a love at first sight, if that exist at all. I came close to her, spread my hands for a hug and it was gracefully accepted by her.

People gathered here in huge number and many had already occupied the chairs kept under sheds circling the field. Others, like us, who reached here late, were trying hard to get a convenient place to watch the jubilant youthful passionate Bihu dance. I found my place in the middle of crowds. But some tall youths, who were blessed by the GOD with such a sterling heights, suddenly came and stood in front of me. They were standing like a monument and my visibility to the field came to an end.

Here winds are blowing strongly, carrying everybody’s prayer with it and bringing blessing for all- truly a heavenly experience. We enter into the monastery. There are small temples inside, each of them with images of Buddhist deities. The smell of incense fills the air, a divine atmosphere altogether. We are now near the Tiger’s Nest, a small board indicating that, the cave where the Guru Padmasambhava meditated. We peep into the cave one by one and feel great to witness such a sacred monastery.

On our way back down we stop in the cafeteria for our meal. But they charge Rs.460/- per head for buffet lunch, of course a vegetarian meal, so we remain happy with a bottle of cold drink at Rs.60/-. It takes less than an hour to get down. We thank God for blessing us with the opportunity to witness such a sacred place, to view such an architectural wonder and to accomplish the YATRA once in this life.

We are driving to Chelela Pass, the highest motorable roads in Bhutan which locates between the Haa and Paro valley. We are passing continuously through oak trees, at times glimpsing wild fowls with long tail feathers and free roaming yaks, then through snow capped roads climb slowly to the Chelela pass. A milestone placed along the road indicates the highest point on Dantak Road at an altitude of 3988 meter above the sea level. We see a perfect white Himalayan Mountains view from here.

Reshmi, the hotel girl, knocks at my door and I turn towards her. She briefs me about the facilities in the hotel and I express to have understood the same. She returns back and I take a nice hot bath, change my dress and after a few minutes enter into the dining hall where Prakash is suggesting to visit Paro Dzong on this afternoon. Everyone is consenting to him and I raise my hand too.

It comes as an unpleasant surprise which is now doubled by a piece of information that from tomorrow there is a three days Public Holiday for the festival Losar. We all stand speechless as we are not feeling at our best. Our driver is promising to give a try tomorrow morning at RST office. But no words of him are taking away the pain we are now feeling because we understand the implications of not having permit for our vehicle.

We were climbing the steep ascent through the muddy, rocky and narrow route. Those on foot were making their path upwards according to their own convenience. Every step on such steep ascent of initial trek is the first test of one’s mind and faith. To strengthen devotees’ faith the Military Personnel are there and their presences are felt throughout the route.

Into the thin air, I was struggling hard for a breath of air. I’ve not climbed above 5300m before and with only 50% oxygen in the air, was struggling even more walking across the ridge. I sat down on a boulder to rest, grasp more air and stop my heart pounding high. This morning, for the first time, oxygen saturation level in my blood dipped below 80 and the altitude began to take toll on me. But no way could I give it up. I was so close of my dream destination, Everest Base Camp! I climbed up this much and was only an hour walk away from it. “Come on Anupam, you can do it!” yelled my guide. I stood up again, mumbled under my breath “Slowly Slowly, Bistar Bistar”, the Nepalese Mantra I learned from my guide for climbing high altitudes. The sense of following the footsteps of many legendary Mountaineers who conquered Everest was boosting my morale and finally I reached the head of downward trail to the Base Camp. I could clearly see from there, the Base camp, Khumbu Ice fall and the Mt Everest. It was then a few minutes’ walking down to the base where rocks were piled up and covered with colourful prayer flags announcing the destination, Everest Base Camp at 5364m!