In the cool morning at Jomsom we wake up and discovered sparkling white magical mountains around us. We slept on the foothills of those mountains last night. Among them, year round snow clad mountains ‘Nilgiri’ (7061m) and ‘Dhaulagiri’ (8167m) are two prominent mountains which overlook the town Jomsom. 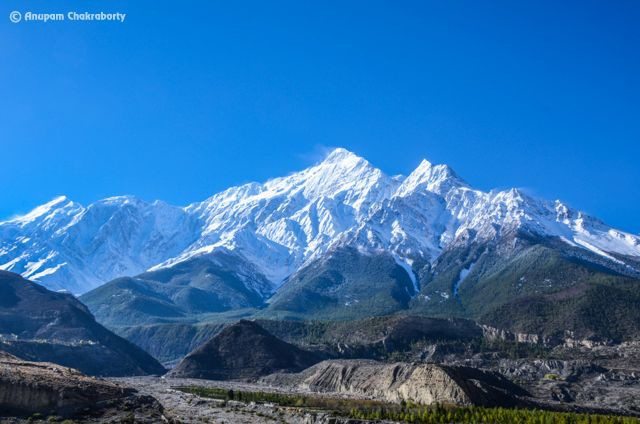 I took a stroll around the town and saw all places of the town within a few minutes. A temple on the top of a barren mountain attracted my sight and I climbed up there. From there, I could see the unparallel views of the mountains, the town, a tiny airport and it’s narrow runway on the foothill of Mt. Nilgiri. 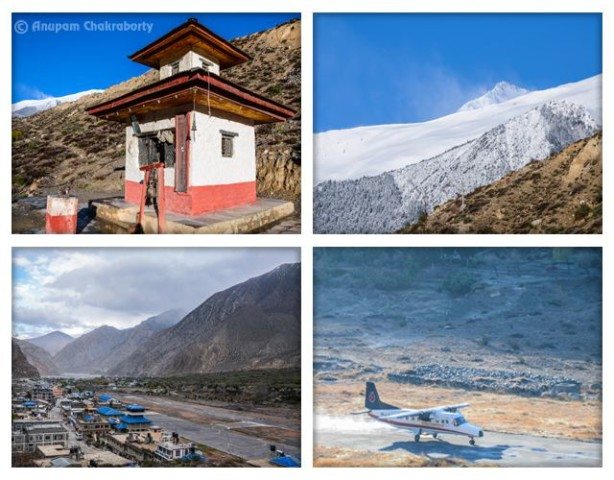 Clockwise from the top left – Temple atop wherefrom I saw the town Jomsom, zoomed view of Moutain Dhaulagiri, Jomsom Town and runways, and Plane taking off 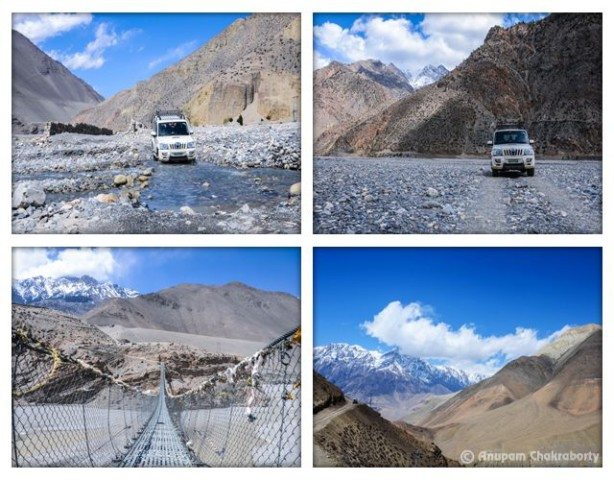 Road to Muktinath and Landscape 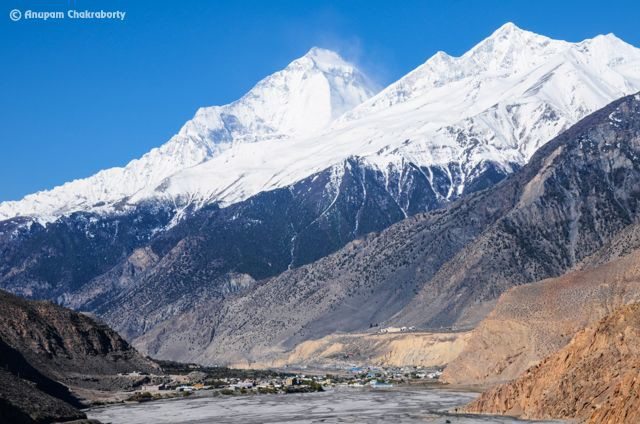 Jomsom on the Foothill of Mt. Dhaulagiri

We moved ahead further and saw ‘Kagbeni’ – an ancient village which seemed not to have lost the mediaeval charm. ‘Kagbeni’ is also the gateway to upper Mustang where Nepal’s hidden Tibetan Kingdom “Lo Manthang’, the most attracted Choser Cave, Ghar Gompa and Damodor Kund locate. But one needs to take special permit from Kathmandu or Pokhra to go there. 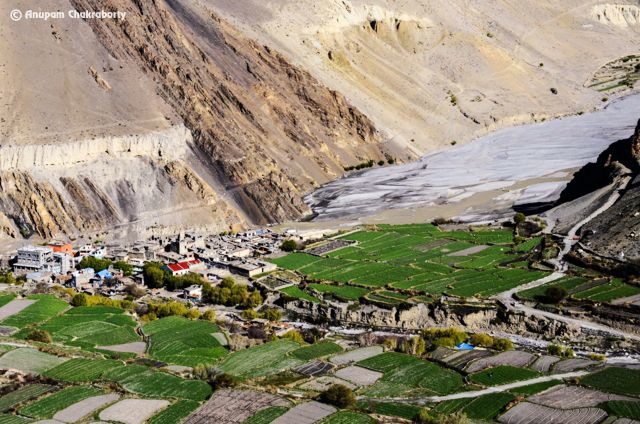 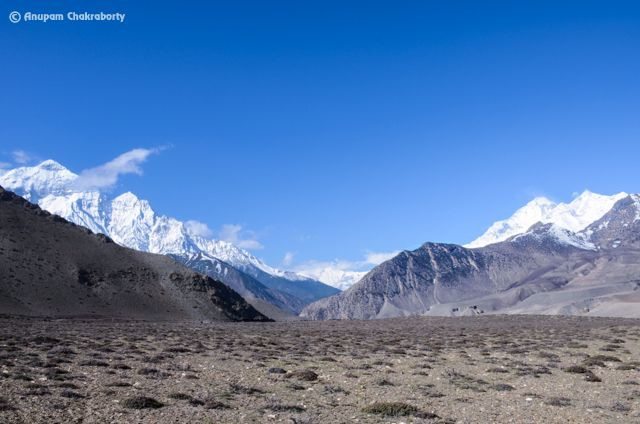 The distance of Muktinath from Jomsom is about 22 Km. We drove around one and half hour ascending all the way to the dead end at Ranipauwa. From there, we began our trek of one and half kilometre to the temple. Ranipauwa is a small settlement that lies below the Muktinath Kshetra. 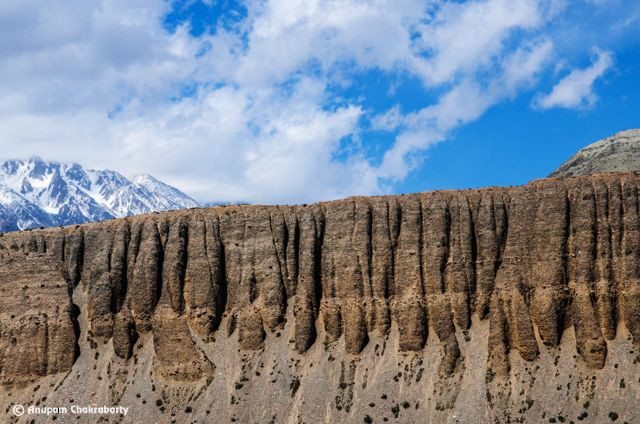 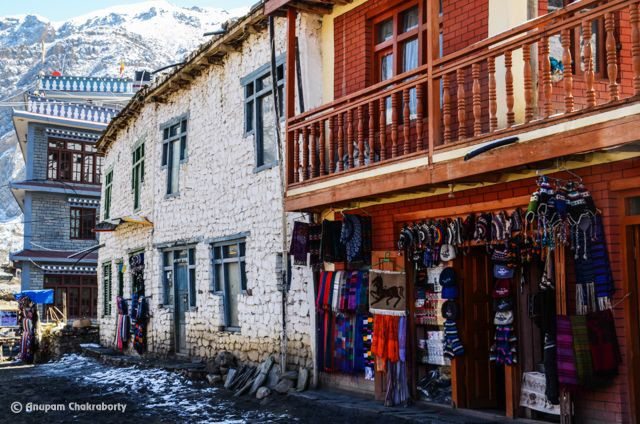 We crossed some handful shops and hotels, walked on the muddy paths, passed through grove of trees, climbed up long stairs and finally entered into the temple complex. There, we saw devotees performing rituals of holy dip in two water ponds that lie in front of the temple. 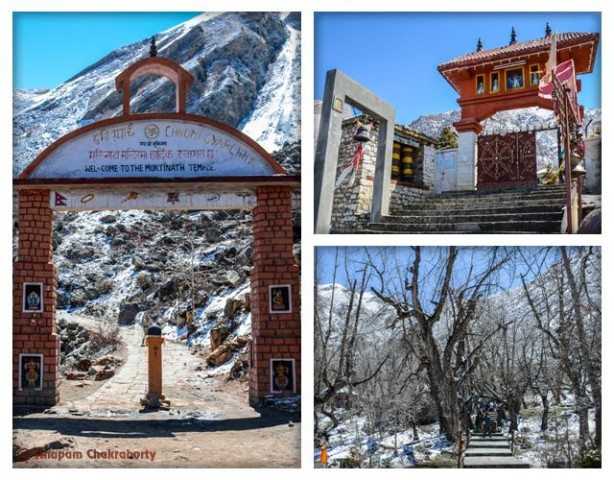 It is believed that holy dip can wash away one’s negative karma. The water of the ponds was ice-cold to immerse. But in such religious places your mind would hardly permit to skip the ritual completely. So I took some holy water in my cupped palm and tossed it over my head. I looked at the other devotees. After the holy dip, they were going to the back side of the temple. Behind the temple there are 108 waterspouts name of “Muktidhara”, made in the shape of bull head, beneath of which devotees were taking showers. 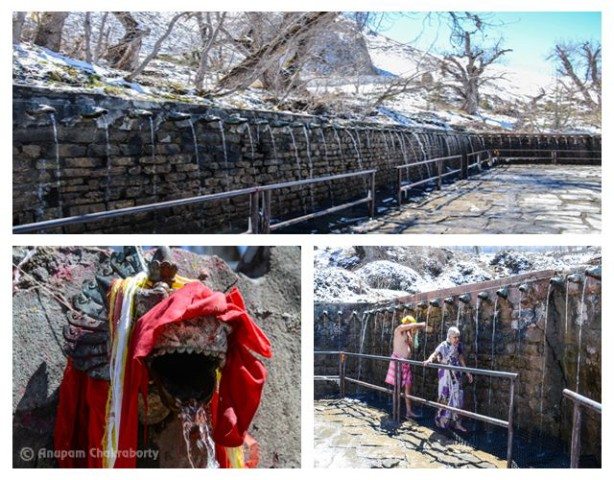 I looked up and saw that source of the water is mountain glacier. Water from the glacier is captured in a well and diverted in those 108 waterspouts.  Dared not to take showers under those freezing water, I caught it from all 108 waterspouts in my cupped palm and tossed over the head. With that ceremonial washing, I thought to have purified myself for entering into the temple. Then I stepped into the holy abode of Muktinarayan- the temple of Lord Vishnu. First time in my life, I had been to any common sacred place of two different religions, Hindus and Buddhists. Buddhists call it Muktinath Chumming Gyatsa, which in Tibetan means ‘Hundred Waters’. According to Tibetan Buddhism Chumig Gyatsa is a sacred place of the Dakinis, goddesses known as Sky Dancers, and also one of the 24 celebrated Tantric places. 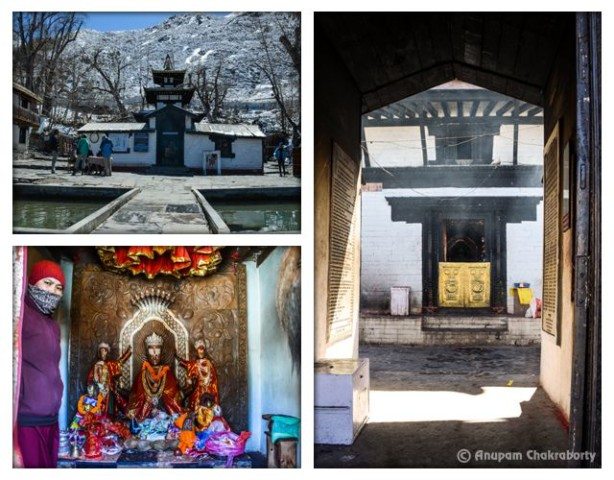 Muktinath Temple and Statue of Gods

The main temple houses the statue of Lord Vishnu which is also revered by the Buddhists as Avalokitesvara – the deity of compassion. In the central shrine I saw a Buddhist nun, a lady priest, who performs puja both for Hindus and Buddhist. The blessings of God came to me through flowers, tulasi (Basil Leaf) and Prasada. However, I did have an encounter with a male priest also who was sitting on outer base of the main shrine. He marked my forehead with red tilak and tied sacred thread around the wrist. With this, ritual of offering and receiving the blessing completed.

After completing prayers and worship at the Muktinath temple we visited Dhola Mebar Gompa, a small monastery with eternal burning flame fed by natural gas, which is situated near the entrance gate of the temple. The main deity of the monastery is Chingresig (Avalokitesvara). It is famous for its continuously burning natural gas fire, which Hindus worship as Jwala Mai, the Goddess of Fire. 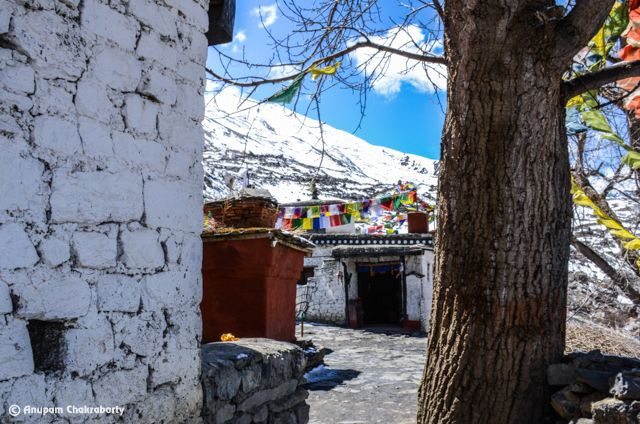 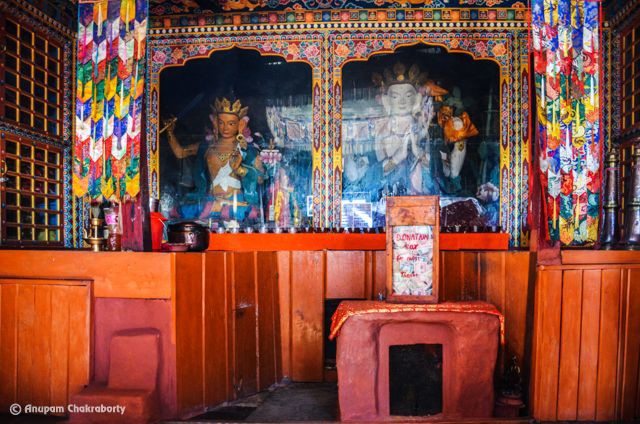 Inside the Gompa. Eternal flame can be seen inside the structure under Donation Box in the Photo

Muktinath lies at an elevation of 3800m and Jomsom is at 2750m. But truly speaking we saw none suffering from altitude sickness. As I was returning to the Jeep stand, the street side vendors were offering for sale of their local crafts, handlooms and also the Shaligrams of Kali Gandaki River. The waterway downstream from Muktinath along Kali Gandaki is the source of all Silas or Shaligrams that are required to establish a temple of Vishnu anywhere in the world. However, genuineness of those Shaligrams needs to be verified before buying. Not being capable of verifying the same I purchased a pair of hand gloves and resumed the return journey.

We returned to our hotel at Jomsom in an hour leaving behind the beautiful landscape of Mustang. I realized by then why people go to visit Mustang again and again! It’s not mere a religious place, but the heavenly land where abode of Lord Vishnu locates.

We had not much to do in the afternoon at Jomsom. It was raining nonstop which I thought was an indication of clear and blue sky in the next morning. I did forecast the weather well! We started our return journey early in the next morning and travelled through the foothills of Himalayan mountain range of Dhaulagiri and Nilgiri. 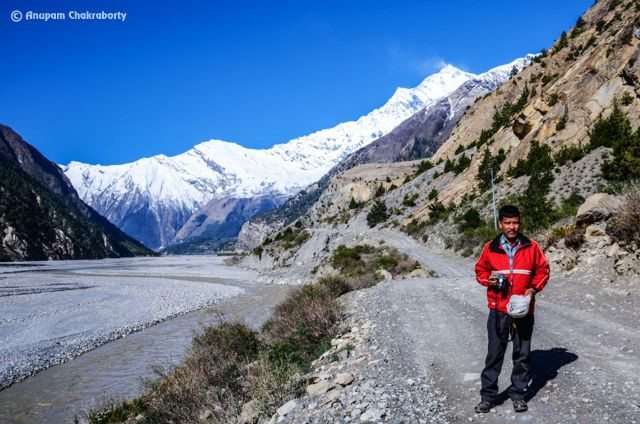 Himalayan off-road from Jomsom to Ghasa 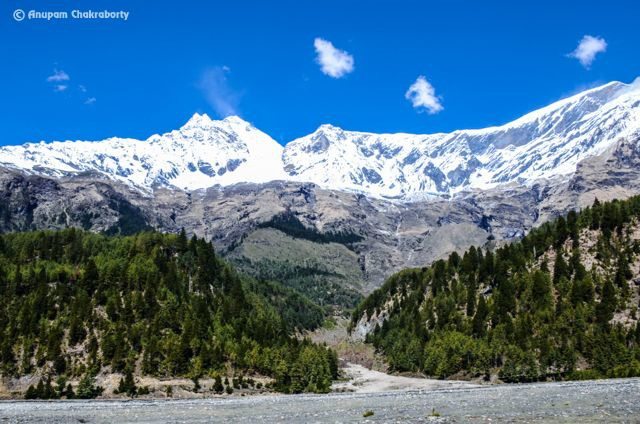 Road goes through the foothills of Mt. Dhaulagiri

We crossed the village Marpha which is popular for apple garden and liquors like marpha brandy besides tourism. It falls on the trekking route to Jomsom. Many trekkers stay here and enjoy the beauty of this place. At every turn we were coming close to the Mountain Dhaulagiri on the right and Mountain Nilgiri on the left. 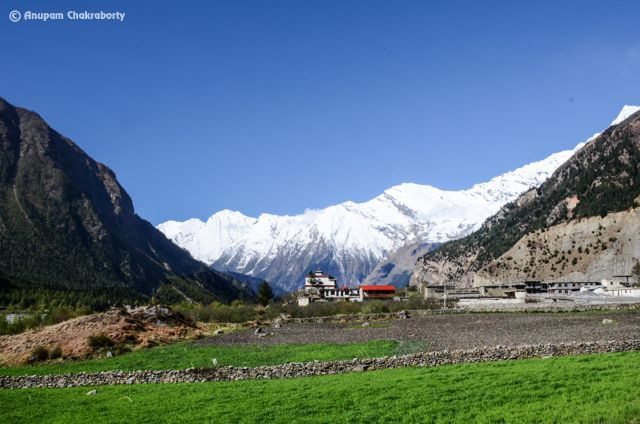 We reached another village call ‘Tukuche’. Thakali is a caste in Nepal and maximum thakali people lives in this village of lower Mustang district. It has a small monastery which we found closed when reached there. However the monk, who stays in the monastery compound, opened it for us. 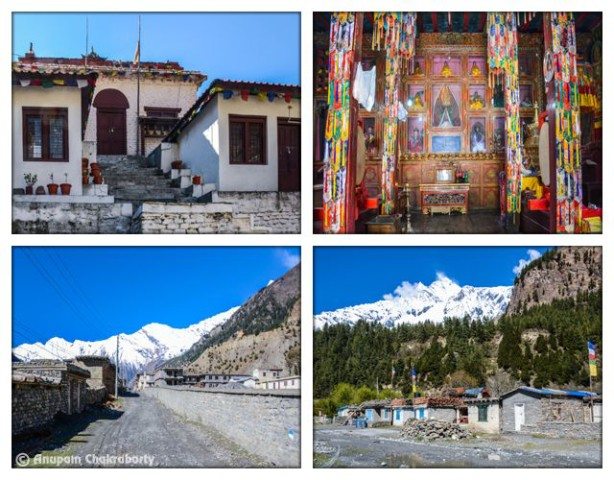 Tukuche Monastery and the village

Tukuche is a nice place to stop for a while and enjoy the spectacular views it offers. We walked on its narrow lanes, bought local walnuts and ate golden apple before resuming our onward journey. Along the way to Ghasa we saw the magnificent and heart touching views of Mount Annapurna. 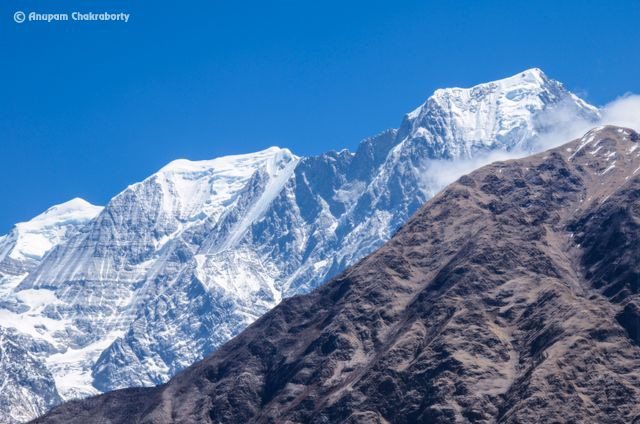 I never imagined that I would see those great Himalayan peaks at such proximity. It was quiet difficult to travel there because of tough weather and poor road condition. It indeed demands to undergo physical discomfort, a strong will and above all, grace of the Lord to reach his holy land.  For me, it was a journey to cherish for life and beginning of a new dream- ‘UPPER MUSTANG’!