HOLY MUKTINATH YATRA is a journey to undertake once in the lifetime!  It is believed so!

I took the holy bath under all the 108 waterspouts!…….. and also took a holy dip in ice- cold water of the ponds!!” the Israeli gentleman was overjoyed while describing his experience of Muktinath to me on the hotel lobby at Jomsom.

It was his third visit to Mustang and first to Holy Muktinath. I, being a first time visitor, was much eager to know more about the heavenly land that attracted him again and again. 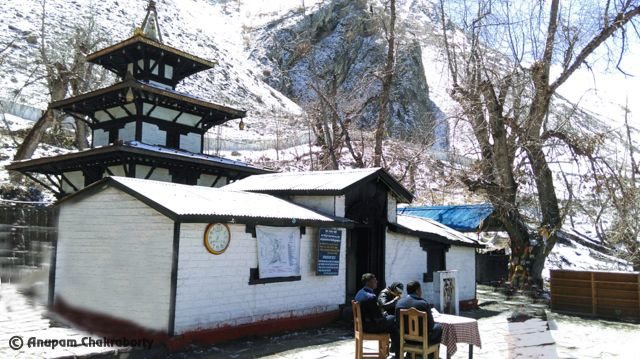 Muktinath Temple is a symbol of cultural and religious symbiosis between Hindus and Buddhists. It is a divine place where Hindu temples and Buddist Gompas and Stupas coexist. Hindus call the valley as Muktinath Kshetra or Muktinath Dham and Buddhists call it the ‘Chumig Gyatsa’(which means 100 waters in Tibetan). In the district of Mustang of north central Nepal, the valley lies in the Himalayan ranges at an altitude of 3800 meters on the northeast of town Jomsom. 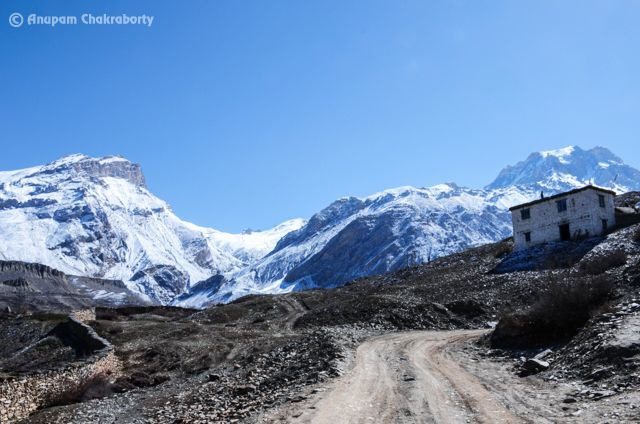 Road from Jomsom to Muktinath Temple

The temple of Muktinath is very small and made in Pagoda style. Its structure may not have a great architectural attraction but the land of divine beauty is the abode of Lord Vishnu who is revered by Hindus as ‘Muktinath’(the God of Salvation)  and Buddhists as ‘Avalokitesvara’ (the bodhisattva, the deity of compassion). 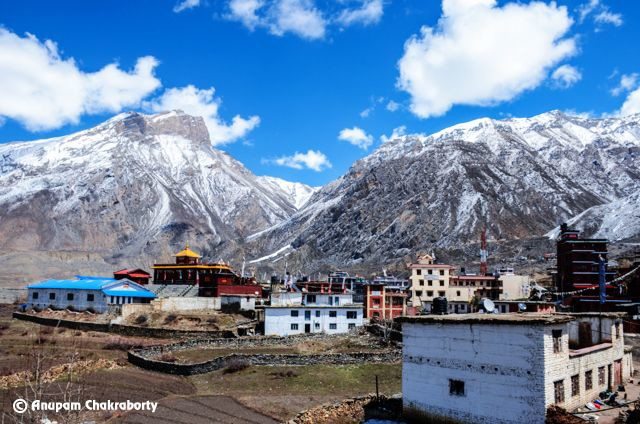 A settlement near Muktinath Kshetra

It was 2013, my friend ‘Prakash’ and I started dreaming about holy Muktinath yatra. Later, I encouraged my friend ‘Chandra’ to join us. We three then persuaded a common dream. Muktinath Yatra with small group would involve more cost and hence we wanted two more persons in the group. It was not happening for long. Perhaps the Lord was delaying his blessing on us. It was only with the beginning of 2015 that thing started moving into right direction.  Two of our friends, ‘Kamal’ and ‘Sandeep’, joined us and we became five.  It was then all set to go! The final day arrived and we hit the road to enter into Nepal. 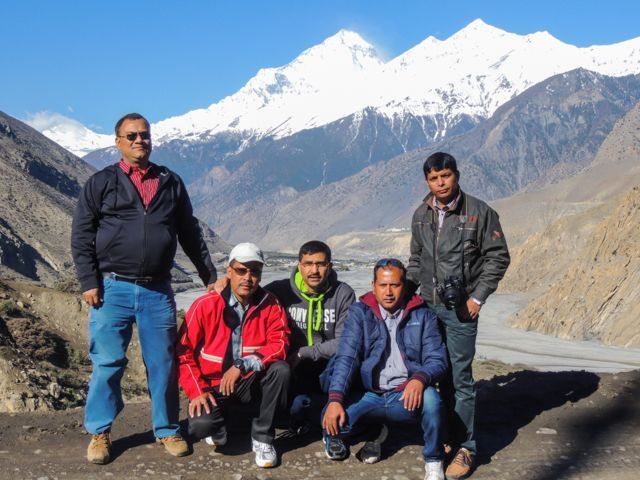 We, the five on the way to Muktinath

We got down at Gorakhpur railway station. Outside it many four wheelers were waiting for passengers to drop at Sunauli of Indo-Nepal Border. At Sunauli we were dropped before the entry gate to cross the same on foot. After crossing the border we hired a Maruti van to reach Lumbini- the birth place of Lord Buddha. Next day after visiting Maya Devi Temple at Lumbini, we arrived at Pokhra in the evening. Pokhra is the starting place for journey to Muktinath.

Reaching Muktinath has always been a difficult task. It not only requires physical endurance but also a strong will. To reach Muktinath one has to reach the picturesque town Jomsom that lies in lower Mustang.  But there was no service road to Jomsom until an off-road opened in the last part of 2010. Before that, the only means to reach Jomsom was either to fly from Pokhra or travel partly by bus up to Beni or Nayapul and then to go trekking the entire route.

We wanted to enjoy the scenic Himalayan off-road journey and were prepared to undergo the physical discomforts that might be received in return. But God wanted more test from us. We had not yet booked the vehicle. The bad News came! Political party in opposition called “Nepal Bandh” (Strike) for three days. Our journey became uncertain! We were shaken by the news, but less we felt short of our desire to reach the ‘Dham’.  We ran from one tour operator to another and at last, at 10’O clock in the night we booked a Scorpio 4WD for our journey to Muktinath in the next morning.  Travelling to Muktinath by road requires Annapurna Conservation Area Permit which can be obtained from Pokhra or Kathmandu. A copy of the photo-id card (namely, Election ID Card or Passport) and two copies of passport size photos are required while applying for the permit. The tour operator did everything to get our permits; they generally do this for their customer.

It seemed to be a successful Bandh! I went to the Hotel roof top and saw no vehicle on the road but a few cycle vendors selling fresh fruits. The cloud on our journey existed until I saw a vehicle with green number plate was coming to our hotel. In Nepal it is safe and recommended to travel in tourist vehicles with green number plate.

It was 7th April, 2015, the much awaited journey started finally. But it was the only tourist vehicle plying on the road.  The driver was sceptical; he doubted stone throwing on the vehicle as it happened with him earlier too. He was driving cautiously on the empty road. We said, “Have faith on God, let’s go, we will face whatever comes on the way!”

Soon we hit the highway to Beni. Looking at Prakash loudly I said, “It’s happening!” I shook hand with him. He smiled.  It’s the dream that was becoming true! True for all of us!

The tar road upto Beni was well maintained. On the way we passed Nayapul, the starting point of great Annapurna Trek. The famous river Kali Gandaki joined along the road before Beni, and continued.  It took around two and half hours to reach Beni, a distance of about 80 Kms from Pokhra.

Jomsom is about 76 Km from Beni and our actual off-road journey would start from there. We saw people gathered in numbers at the bus-stand of Beni, some of them were standing with red flag of Unified Communist Party of Nepal (Maoist), some were the passengers who stuck up due to strike and few police men who were guarding any probable violent action due to bandh. 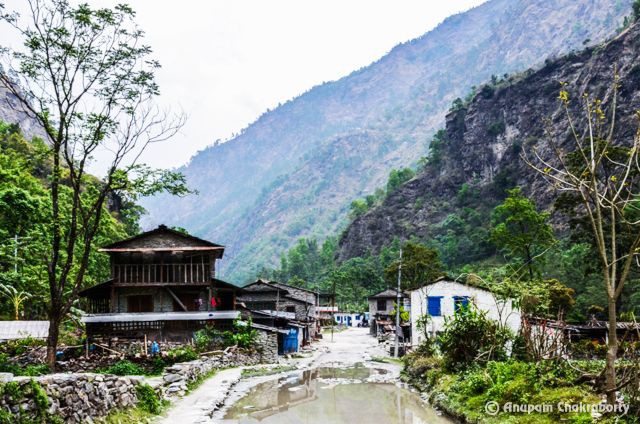 Off-road from Beni through the mountain village

Our off-road journey along the famous Kali Gandaki River started and from very beginning the SUV started dancing both horizontally and vertically. We had no doubt of getting many thorns in the bouquet. The first destination would be ‘Tatopani’, a village that falls on the way and is famous for hot spring water. 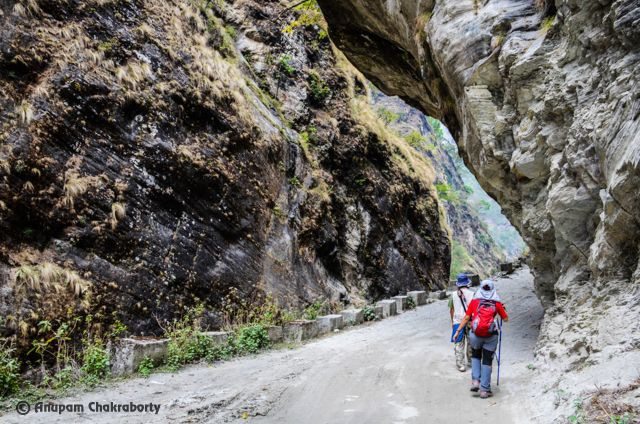 Trekkers on the way from Beni to Tatopani

The beauties and grandeurs of Himalaya were unfolding one by one on this beautiful bumpy off-road.  Along the Kali Gandaki River, which is flowing down from Muktinath and mainly famous for Shaligram Shila (a kind of black stone which is revered as Lord Vishnu), we were passing through beautiful mountain villages, went middle through the giant rocks and saw hanging bridges connecting two mountain villages. 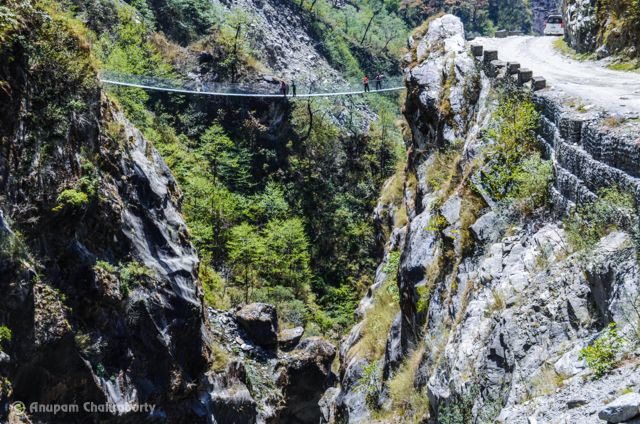 Our driver stopped at a turn and went out of the car to assess water level on the road. We followed him and saw the beautiful waterfall hitting the road from the mountain top and then falling down to the river. The view was splendid! A rare to miss! With all the risk of sliding down the river our driver crossed that stretch carefully. 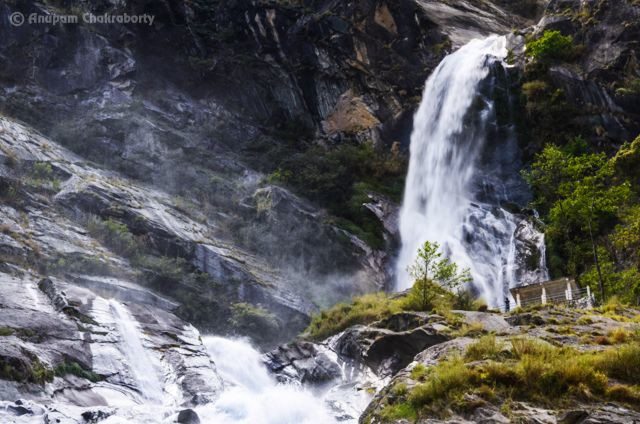 Waterfalls on the way

We arrived at Tatopani in one and half hours. Here, all vehicles are required to stop for checking at TIMS check post. Down at the riverbed of Kali Gandiki we saw a helicopter kept for rescue operation. Tatopani is a nice little mountain village. The hot spring pond of Tatopani locates by the side of the road. But the area is covered by tall concrete walls probably for hiding its free of cost view to the by-passer. Yes, it has entry fees and we thought to give it a skip. 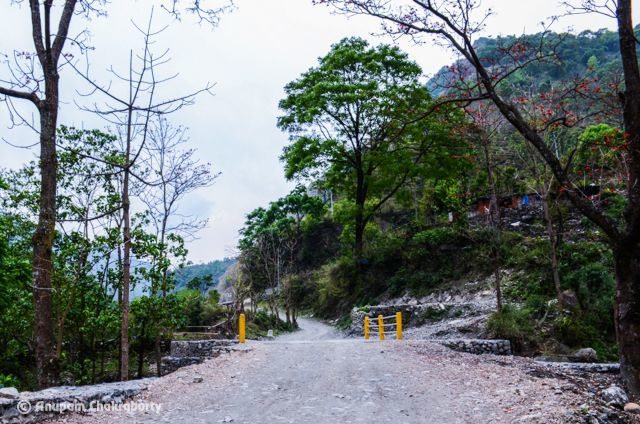 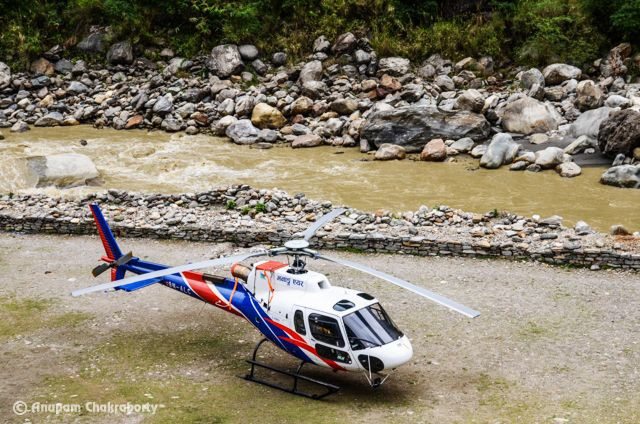 Helicopter on the riverbed At Tatopani

Before departing for the next destination ‘Ghasa’ we received a soft caution from our driver – the worst part of road was ahead and it would continue up to Ghasa. Uptill now our SUV danced gracefully on the bumpy road but it was the time to gain some momentum for the climax. It now started dancing ‘rock n roll’ and inside, we were hitting the hood and pushing each other sideways.

“Are we going to heaven?” The reply came, “Yes, in either case we will reach there! If we cross safely, we will go to the ‘Muktinath Dham’ and if we slide down the river, our next home would be the sky! Both are heaven!” However, the Lord was kind and we reached Ghasa safely in another two hours. 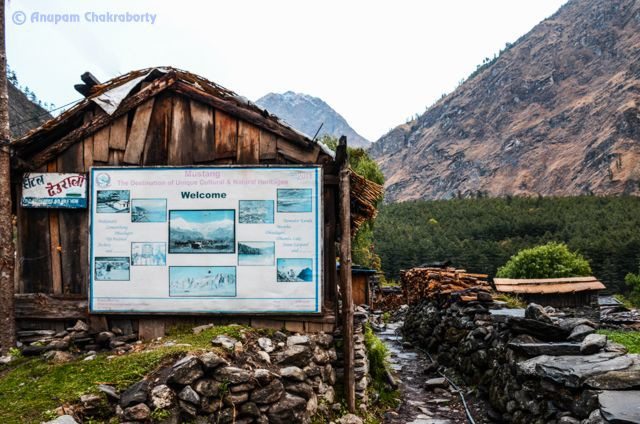 Mustang welcomed us at Ghasa

Ghasa is the entry point of district Mustang which is known for its pristine beauty. It was 6’O clock in the evening. We got down there for some tea! Black tea in Nepal is called “Kalo Chai”. After gulping “Kalo Chai” we resumed our journey. 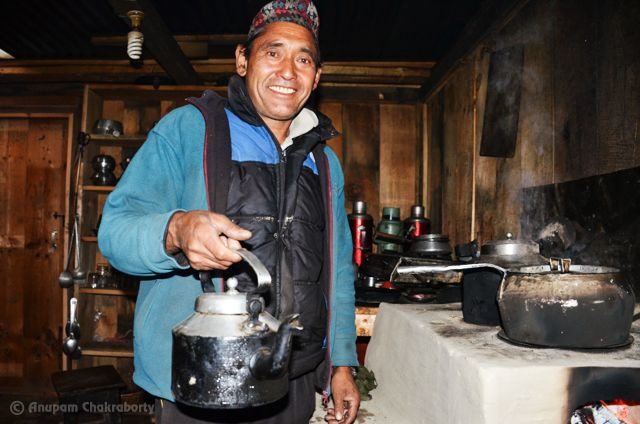 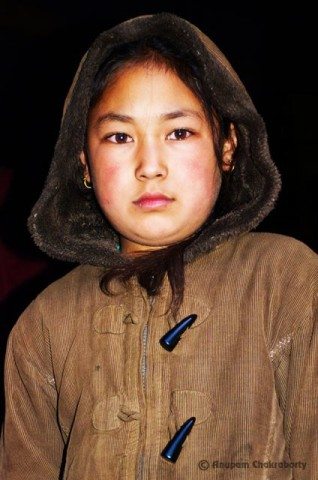 Our Annapurna Conservation Area Permits were checked at Ghasa. I looked at the sky. It seemed overcast! The white Annapurna mountain ranges were visible from there.  Before resuming the journey, we were told that the actual scenic beauty would start from Ghasa and it would continue upto Muktinath. 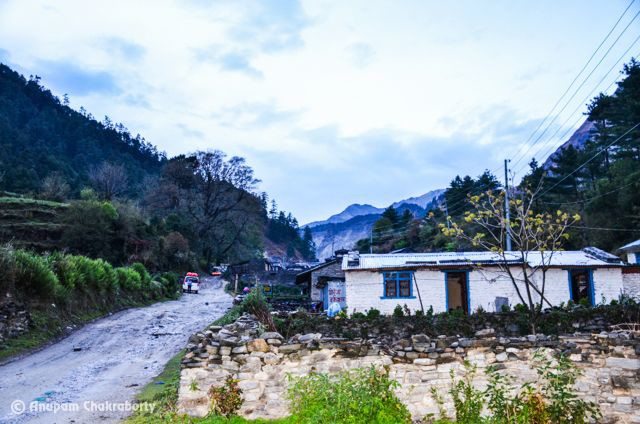 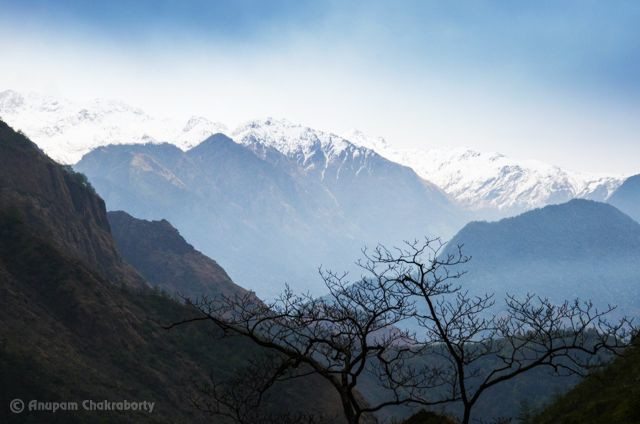 We were enthralled! But it was dark outside and nothing was visible. Road from Ghasa seemed to be better with the SUV tuned back to normal dancing mode. It was 8.30PM; we reached the cute little town Jomsom, a town that we found smaller than our thoughts! We checked in the Hotel Om’s Home. It is the best hotel in the town. About 23-24 years ago Mr. Amitabh Bachchan stayed here for shooting of his film “Khuda Gawah”. 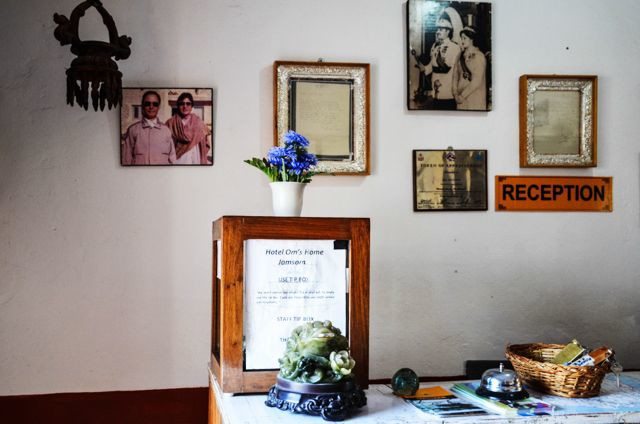 Photograph of Mr. Amitabh Bachchan on the wall at reception. 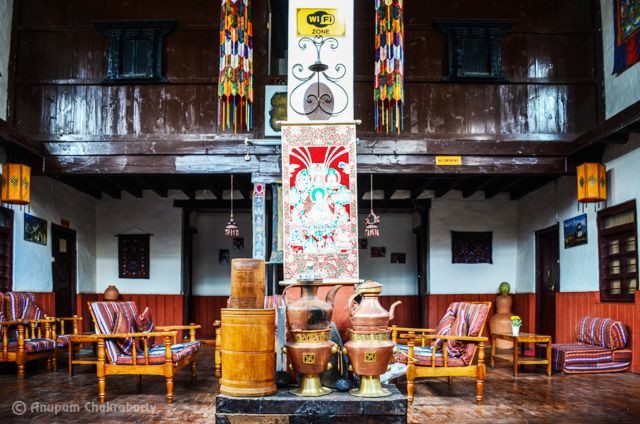 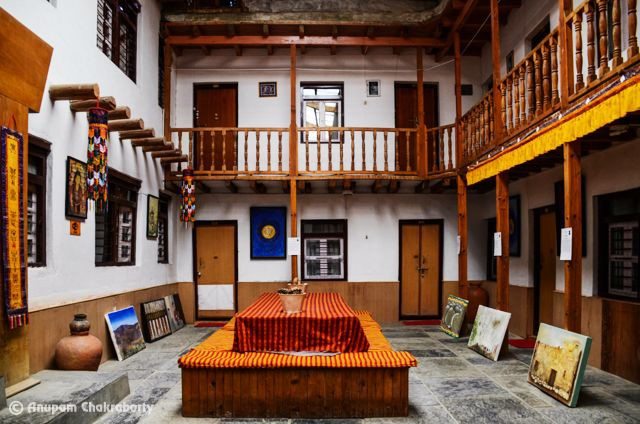 It is not a star category hotel but undoubtedly the best of the lot. Hotel owner endeavoured to preserve the past glory by hanging photographs of Mr Bachchan with him and some film shots of ‘Khuda Gawah’ on the walls. Staying in this hotel was comfortable; it had 24 hours hot water facility and free wifi. The foods were nice but they cost too high.

We retired early to the bed for resuming our journey to Muktinath early in the next morning. 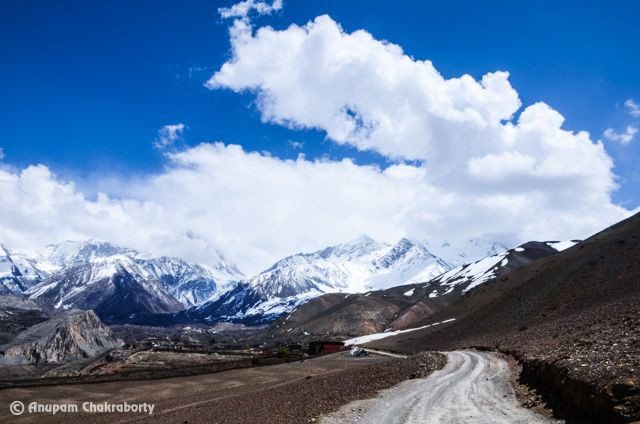 Our journey to Muktinath continues