There was a time when the Kingdom of Ladakh was divided in lower and upper Ladakh.  Lower Ladakh was ruled from Basgo which lies on the Srinagar-Leh highway. We saw the ruined Basgo Palace on our journey to Leh from Kargil. The upper Ladakh was ruled by a different King from Leh and Shey. But later, like it happened in the history of any other Kingdom, the Basgo king Lhachen Bhagan had overthrown the King of Leh and reunited Ladakh. Being victorious the king took the surname Namgyal (meaning victorious) and founded the Namgyal Dynasty which survives still today.  Kings in different reign had established palaces, fortress and gompas in and around Leh which are now maintained and managed by the Archeological Survey of India and are great places to visit.

Like every other travelers in Ladakh, we too spent our second day in Leh. It is advisable to spend a day or two in Leh for acclimatization before going to any places of higher altitude like Khardung La or Pangong Lake. Leh has many great places to offer to its visitors including stunning landscape views, palaces, monasteries, stupas, war memorials and river Indus at Sindhu Ghat. We decided to visit the palaces and gompas on our second day in Leh and first to visit by us was the Leh Palace and Namgyal Tsemo Gompa.

The erstwhile royal residence of Leh locates around 2 Km from the main market place. Though the Palace locates on a hill top overlooking the Leh town it can be reached by car. As we reached the Palace we saw wandering young monks on bike!

The opening hour of the Palace is from sunrise to sunset and the fees for entry to it is @Rs.5/- per person (the fee is Rs.100/- for foreign national other than travelers from SAARC countries). The entrance of Leh Palace is decorated beautifully by wood carvings. 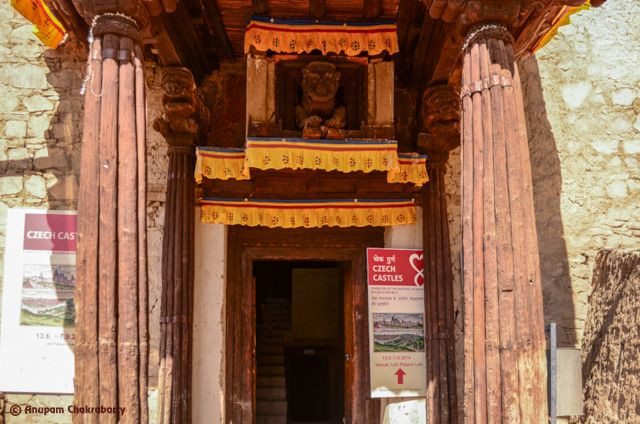 Wood Carvings at the Entrance of Leh Palace 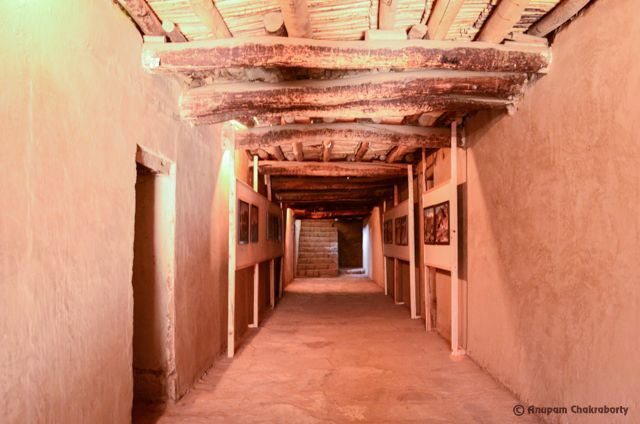 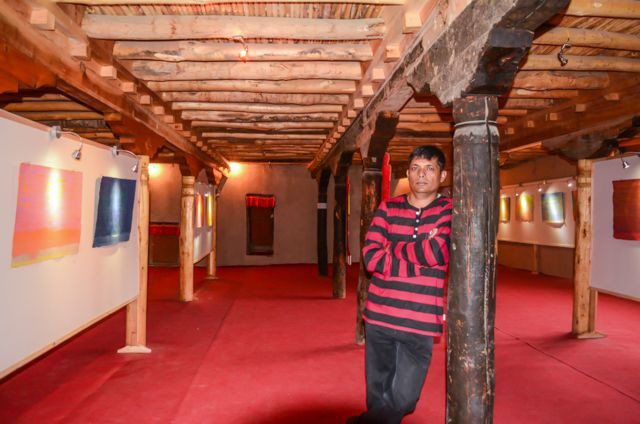 As per Archeological survey of India, the palace was constructed using stone, mud bricks, poplar woods, mud mortar and wooden rafter. The walls were finished by mud plaster. The door heights are very low and we had to duck while entering into the rooms in the Palace. Rooms inside the Palace are dark and no royal belongings can be expected to see inside!

Chapel inside the Leh Palace

The palace houses a Chapel with the statue of Buddha, Mahakala (a protector deity) and a stucco figure of Du-Kar, a form of Prajnaparamita which means ‘Perfection of  Wisdom’ (personified as goddess). Religious texts are also well preserved inside the Chapel. 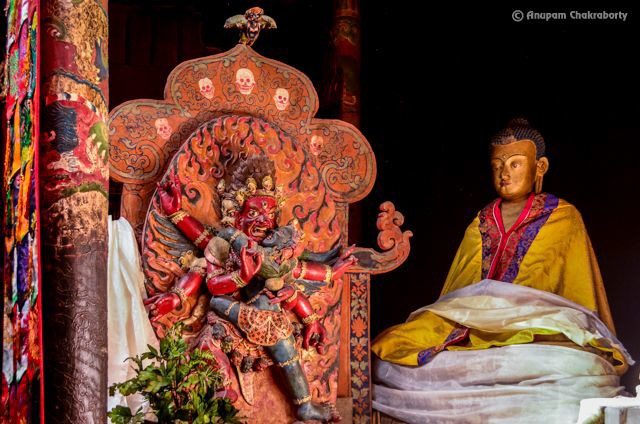 Mahakala, a protector deity in the chapel 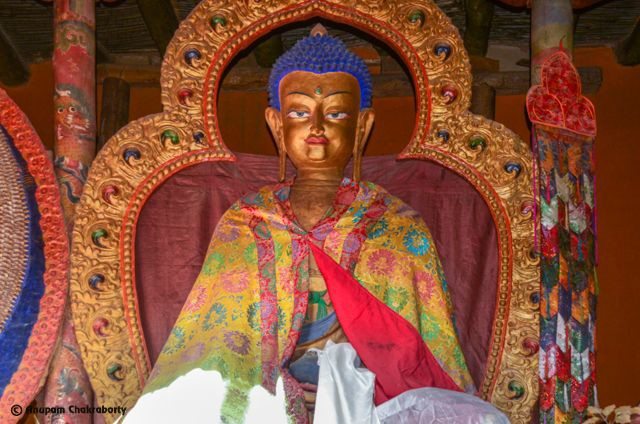 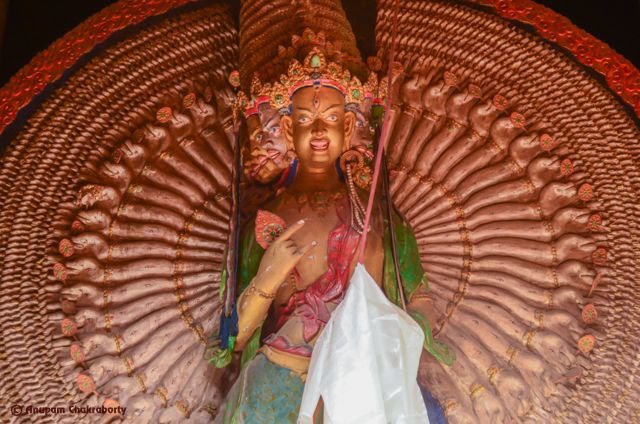 Leh Palace was built as the royal residence by King Sengge Namgyal (reign 1616-1642) in the 17th century. It was the home of the royal family until they abandoned it and moved to Stok Palace in 1834 due to invasion of Ladakh by Dogra forces of General Zorawar Singh of Maharaja Gulab Sigh, Jammu.

I went to the roof which provides panoramic views of the town and the surrounding areas. From the protruding balcony of the palace I could see the Namgyal Tsemo Gompa which locates on the top of Tsemo Hill above the Leh palace. 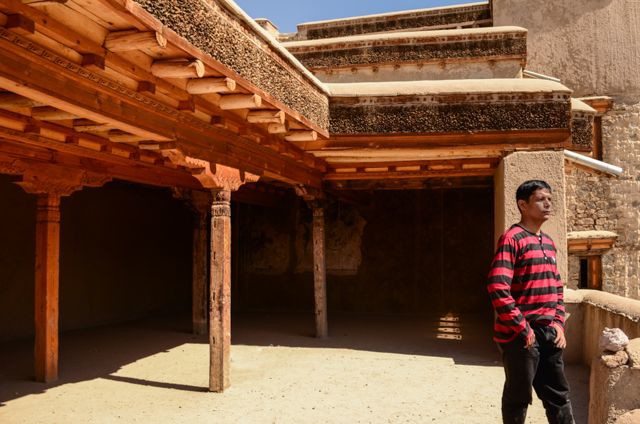 We followed a young monk who was climbing the hill to Namgyal Tsemo Gompa. The path was steep and dusty. For us it was a steep walk of 15 minutes and we reached the monastery.

On his way to Tsemo Gompa 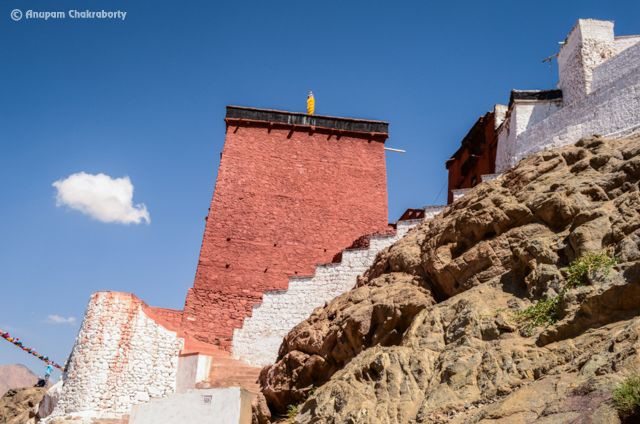 Built in 1430 A.D. by the King Tashi Namgyal, the Gompa consists of two buildings. In one temple we saw a huge statue of almost three storey high Maitreya Buddha (Future Buddha).

The impressive image of Maitreya Buddha can be seen only from the ground floor as there is no access to go up. I sat there for a while in tranquil and sought blessings of the Lord. 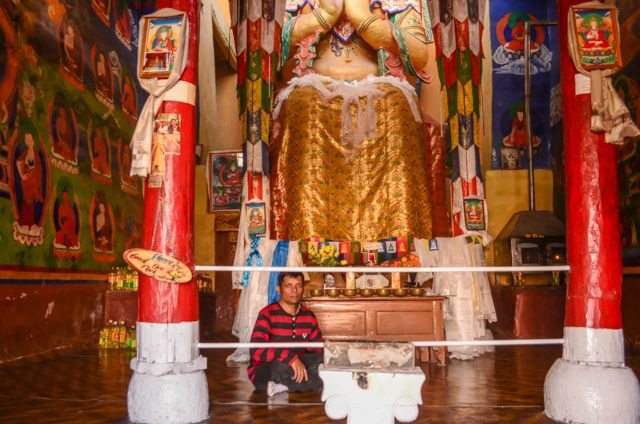 One can see this much of the Statue at eye level 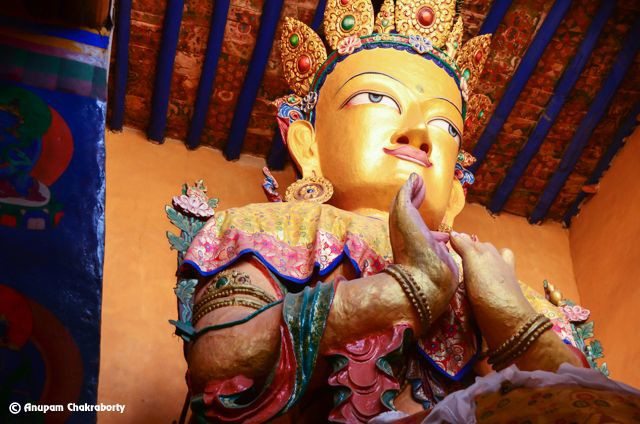 Maitreya Buddha, a close up

The other shrine is a Gonkhang of protecting deities. Inside of it the image of Lord Budhha was surrounded by the protector deities whose faces were covered by cloths. 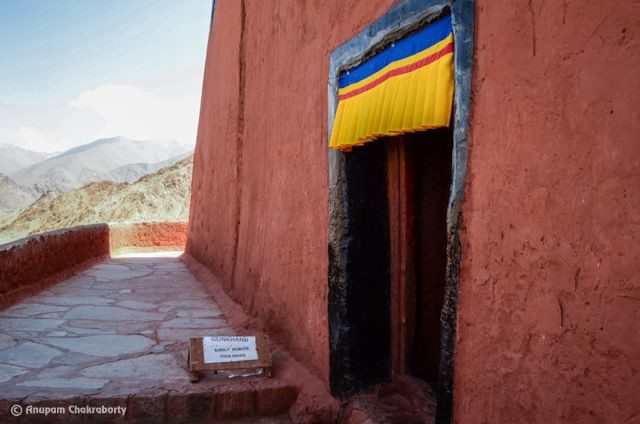 Walls inside the Gonkhang were decorated with beautiful mural painting of Buddhist Deities of which the mural of Deity Green Tara was prominent. 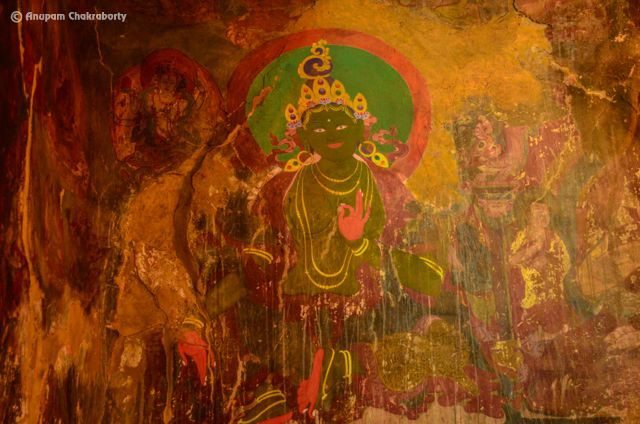 The old Namgyal Tsemo is situated further above and one has to walk on narrow rocky path to reach there. 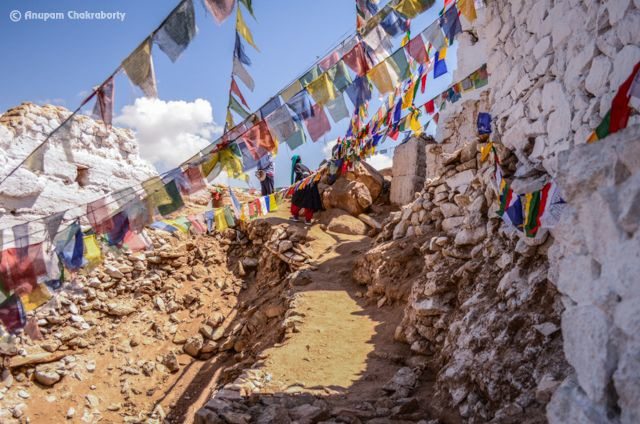 I entered into the old Gompa and saw a beautiful chorten (stupa) on the middle, a tall idol of Avalokiteshvara on the left side and an idol of Manjushri on the right.

Inside the old gompa 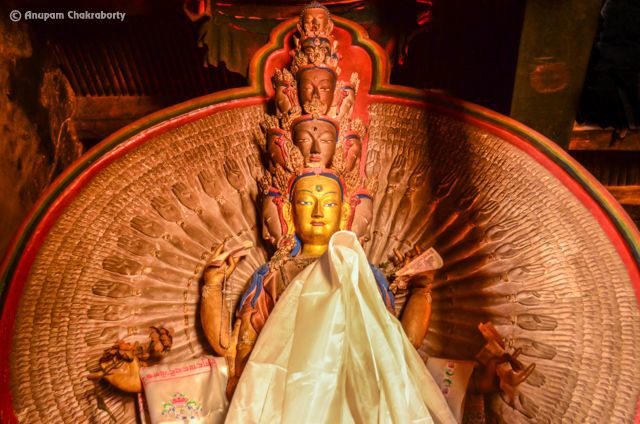 My visit to the Leh Palace and Namgyal Tsemo Monastery made altogether a great experience. The climb to the Tsemo Gompa may be tiring, but the views it offer of Leh town and the surrounding places is rewarding.

View of Leh Town from the Gompa

My visit to other Palaces and Gompas in and around Leh continued about which I will write in my next post. Till then-