Our Last Night Stay at Muslim Territory of Ladakh

We stayed in Hotel Siachen which locates close to the taxi stand of Kargil town. It is one of the good hotels in Kargil. All the 27 rooms of this hotel offer open sitting space in the front long veranda. Rooms of the hotel were moderately furnished and each room had an old model coloured TV. Rooms were decent with attached spacious bathroom having running hot and cold water facility. 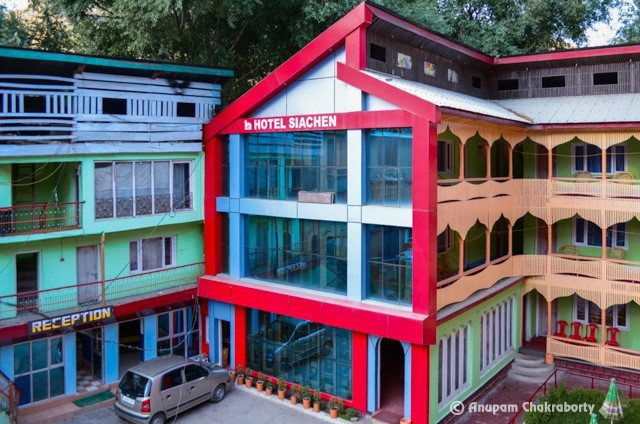 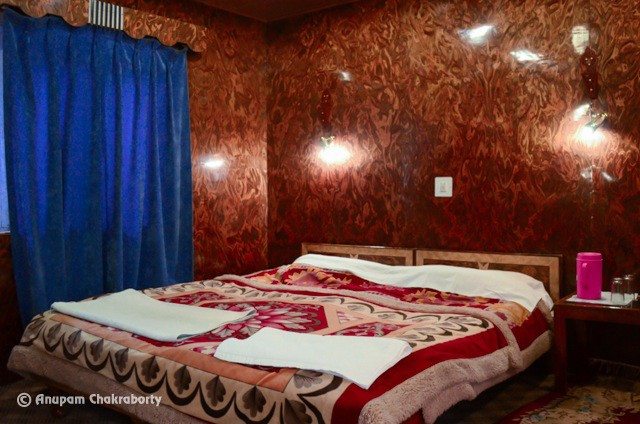 The restaurant of the hotel had no menu card! Yes, no menu card! They write the menus of the foods served on a white paper. The lawn near the restaurant was good to sit for a cup of tea. The Hotel provides small but manageable parking space inside the complex.

But when you are in a place like Kargil, your expectations can not be unbounded!

Tariff: We paid Rs.2200/- for a double bed room with one extra person for our one night stay.
Rating: Hotel Siachen is a good budget hotel and I rate it 3.5 out of 5.

Contacts of the Hotel Siachen

Journey towards Buddhist Territory of Ladakh

Early in the morning we bid adieu to Kargil and set off on the road to mystical land of Ladakh. The road was pretty good unlike most of the roads of hills. We, though, were travelling on high lands but always it looked like moving on a plain terrain. We travelled 29 KM so far from Kargil. It was about 8 km before the Mulbekh monastery when we turned right on the road that branches off from Kargil-Leh highway. We crossed the old Shargole Bridge and travelled 2 more km to a valley. The Shargole village welcomed us in no time. Shargole is situated right of the Kargil-Leh road and the purpose of our visit to the village was to see the Shargole Cave Monastery.

Located in the Shargole village the Shargole Cave Monastery is about 31 Km from Kargil and is a place to see the architectural wonder. As we were approaching the village we could see from far a white structure attached to a yellowish-brown hill. The road was accessible to base of the vertically rising mountain on which the white coloured small cave monastery was giving the impression of being hanging out of it.

Way to the Monastery

The monastery is placed at the centre top of a brown mountain cliff and appears as if suspended in the middle of it. A narrow road with many steps will take you inside to this wonderful cave monastery. This monastery has many elegant frescoes. This is one of the old Buddhist monasteries in Ladakh region. The place is not visited regularly by the travellers or it may be also that it is not promoted much. But the architectural curiosity that developed in me from a photo of this monastery brought me here and it was worth to visit.

It is popularly known as Mulbek Chamba. Situated 37 km from Kargil, Mulbek monastery is famous for the Chamba statue. Chamba means Maitreya. Maitreya Buddha is the future Buddha believes to be born 5,000 years after Goutam Buddha left his physical body. The main attraction of the monastery is the 9 meter (30 feet) tall statue of Maitreya Buddha.

The Mulbekh monastery is situated right on the side of NH-1D. It actually overlooks the Srinagar Leh national highway. From Shergol Monastery we returned on the same way to join the Kargil Leh road and after travelling around 8.5 Km we could see from distance a giant rock with a small temple below.

The Giant Rock of Mulbekh Monastery

The road we left behind

The monastery has a small courtyard. As we stepped inside the entry door of monastery we saw a 30 feet tall limestone sculpture of Maitreya Buddha. 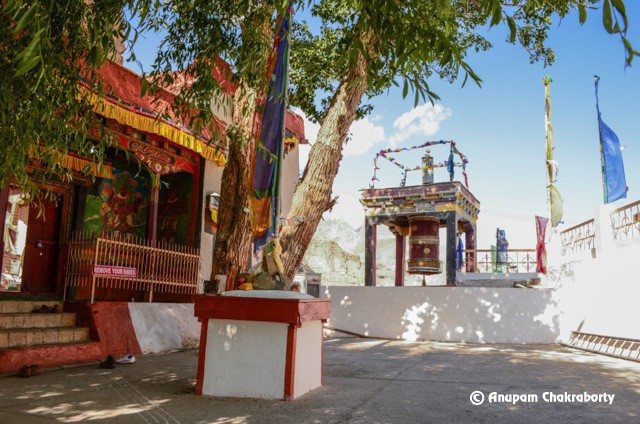 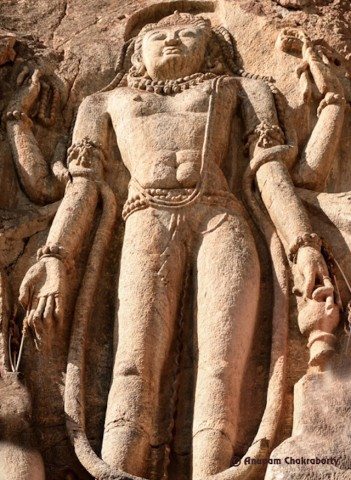 It was carved onto a single rock face and it overlooks the national highway. We are told that this sculpture of Maitreya Buddha measures 9 meter from base to its top. The monastery actually encircles this statute of Chamba. Inside the monastery, the walls are decorated with murals (wall painting) of historical Buddha. An idol of Avalokiteshvara – the god of compassion and mercy is present in this monastery. 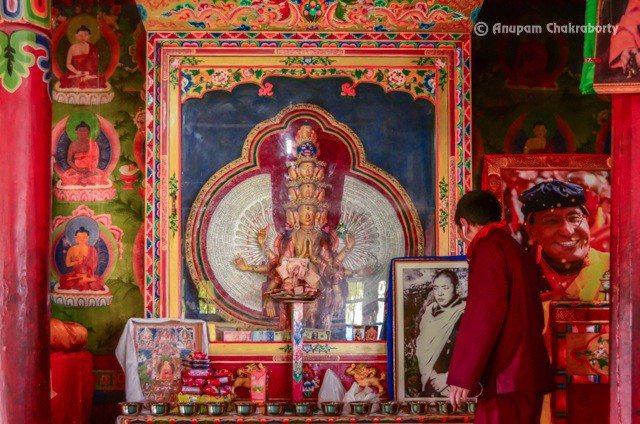 The four armed imposing statue of Maitreya Buddha at Mulbekh is very much attractive and there’s nothing like this 30 feet tall Buddha along the Srinagar Leh Highway to open your eyes wide! 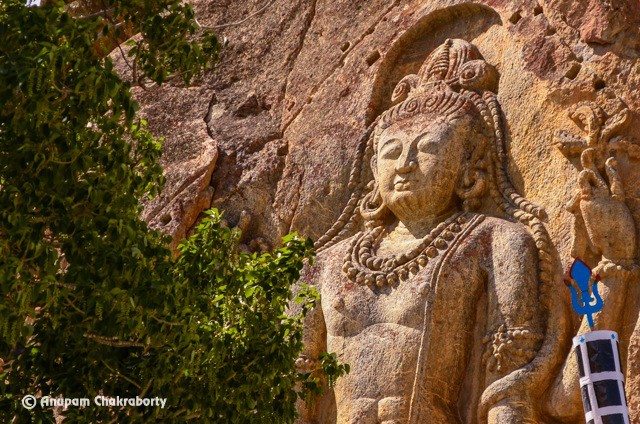 Looking closely at its face I found resemblance with Lord Shiva and have a doubt if the persons instrumental in carving the statue were from Tibet or Ladakh. Anyways, the sculpture is believed to have been carved in the Kushan period (during the rule of King Kanishka) during the first century BC; however, some also dates it back to 7th-8th century.

There are two high mountain passes from Kargil to Leh. The first is Namika La at an altitude of 12198 feet above MSL. It is  situated at a distance of 15 Km from Mulbekh and 55 km from Kargil. Namika, as I was told, means pillar of sky. While approaching the pass we could see from far distant a pillar like object rising to the sky. 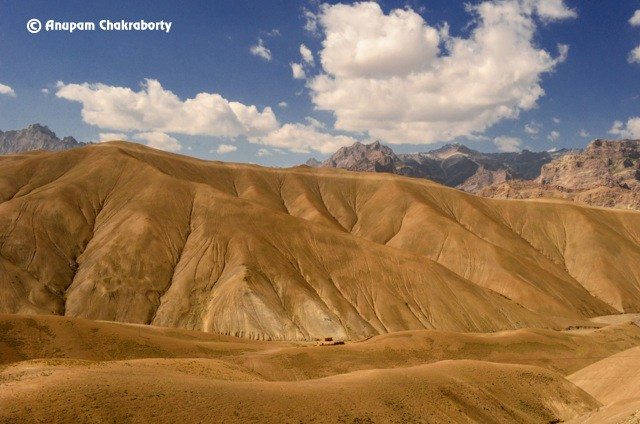 We arrived at Namika La.  The summit sign was beautifully decorated by prayer flags. The main area around Namika La is weathered mountain. The mountains around Namika La looked like lunar landscape where from the ridge ‘Namika’ rises. 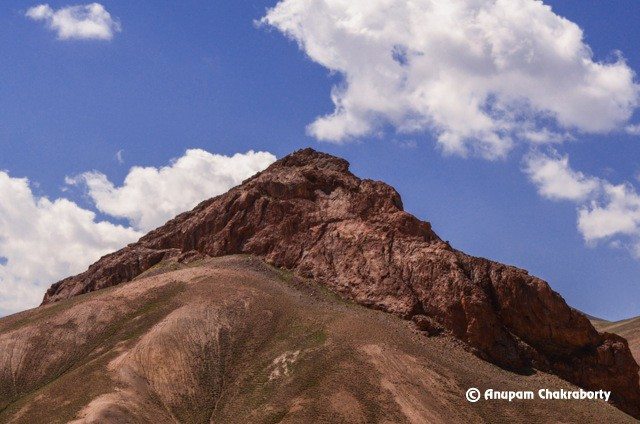 The second high mountain pass ‘Fotu La’ is even higher.  Fotu La locates at an elevation of 13479 feet above MSL.  It is 88 Km from Kargil and 36 Km from Namika La. 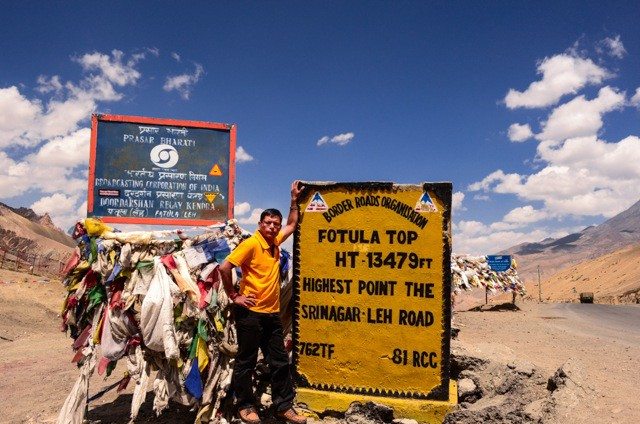 Me at Fotu La

The pass was decorated by prayer flags fluttering in the wind. At Fotu La, summit sign certifies that you stand on the highest point on the Srinagar Leh highway. 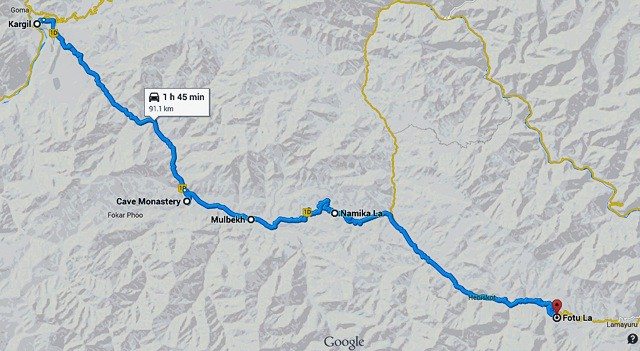 The Route Map from Kargil to Fotu La

We continued our journey towards much acclaimed Lamayuru monastery.

I will come back soon with stories on Lamayuru, Alchi and Likir monasteries in my coming post. Till then-

First of all, sending my good wishes to all of you to stay safe and to fight against Covid. We all know how terrible…