The most famous tourist attraction in Leh is Shanti Stupa. Why? Well, it’s not easy to say one reason. The architecture of the stupa as well as its location attracts the visitors most. As the name suggests, the Shanti Stupa is a part of the world peace pagoda mission. To promote world peace and commemorate the 2500 years of Buddhism, it was built by Japanese and Ladakhi Buddhists. Different in architecture from the Ladhaki style, this white dome Stupa (Chorten) was built facing the Leh Palace on a steep hilltop at Changspa which locates 5 kms from Leh. Construction work of the Stupa was started in the year 1983 and it was inaugurated by his holiness 14th Dalai Lama (also the present Dalai Lama) ‘Tenzin Gyatso’ in August 1991. 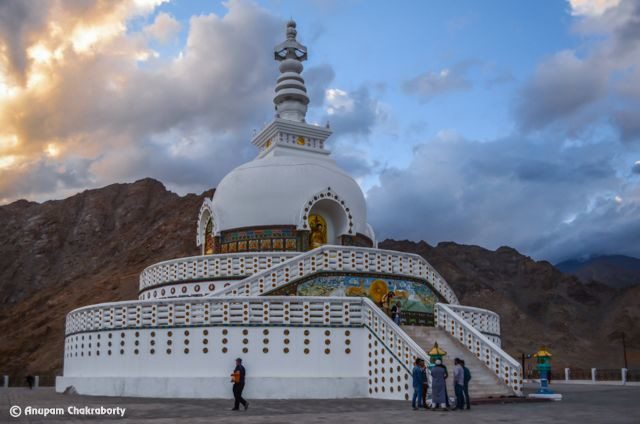 TO REACH THE SHANTI STUPA one may climb about 500 steep stairs! ALTERNATE or the easiest route that we followed was the drivable road. So reaching Shanti Stupa on foot would be a great idea, if one can take a little physical discomfort. 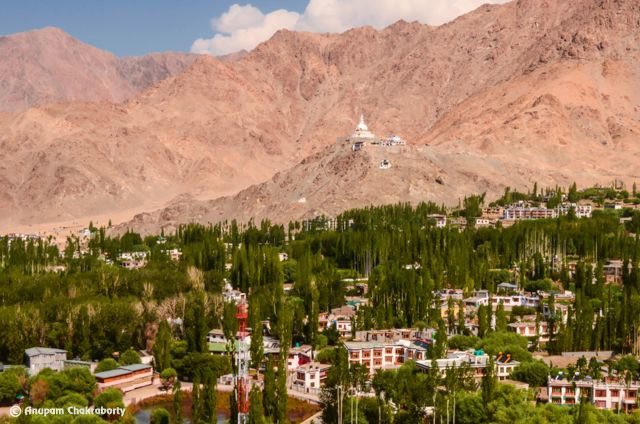 It was easy to spot the white dome Stupa from anywhere in Leh and we had no idea about its size until we reached there! We reached the place. It has a huge flat surface that definitely was made by cutting the hilltop and the Stupa- it is bigger in size than what we imagined. 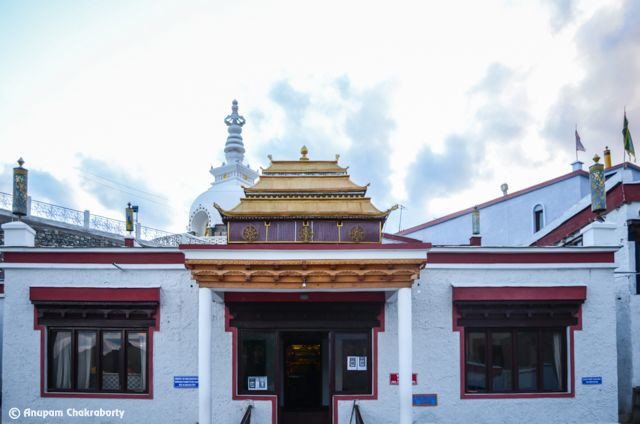 WHAT WE SAW was a temple of Buddha that lies just few meters before the Stupa. The temple is there since 1985. Inside the temple the golden statues of Buddha in different shapes or forms are kept. 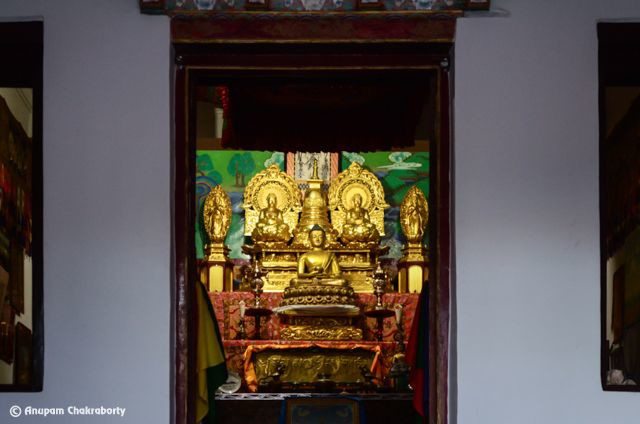 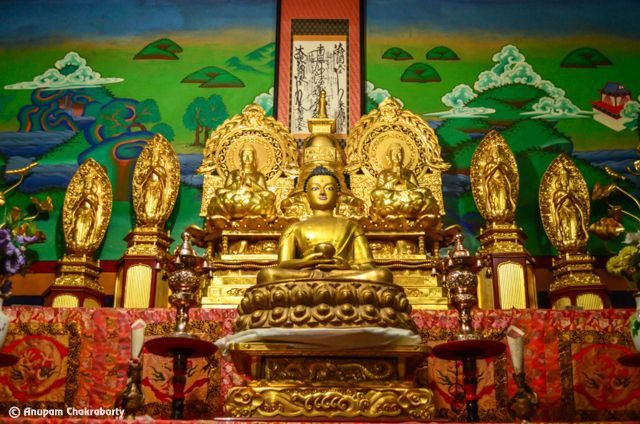 Golden images of Lord Buddha inside the temple

THERE IS ALSO a meditation hall. We stepped into the hall and experienced complete silence inside. A Lama ji (monk) was making prayers to the Lord sitting on a chair and few visitors were enjoying the peaceful ambience sitting on the floor. 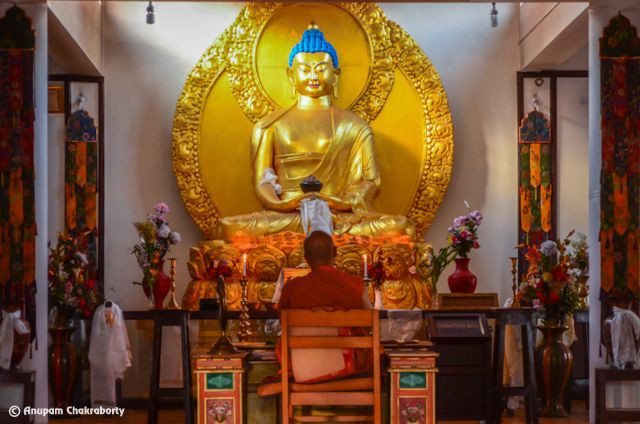 Statue of Lord Buddha in the Meditation Hall

After spending few minutes in the meditation hall we proceeded towards the Shanti Stupa.

LO, BEHOLD the Shanti Stupa! It is grand in size! The white Stupa, stands on the hilltop at Changspa lies at an elevation of 4,267 meters above the sea level, offers a 360 degree panoramic view of the whole Leh city. 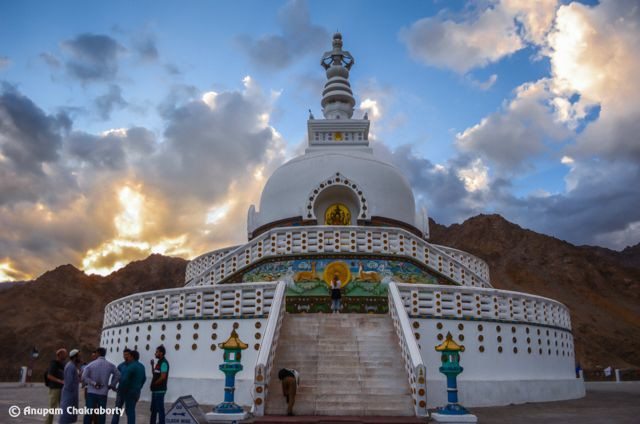 BUILT AS A two level structure, few stairs of the Stupa led us to its first level. There, a golden statue of Lord Buddha sits on a platform representing the “Turning Wheel of Dharma” (Dharmachakra). 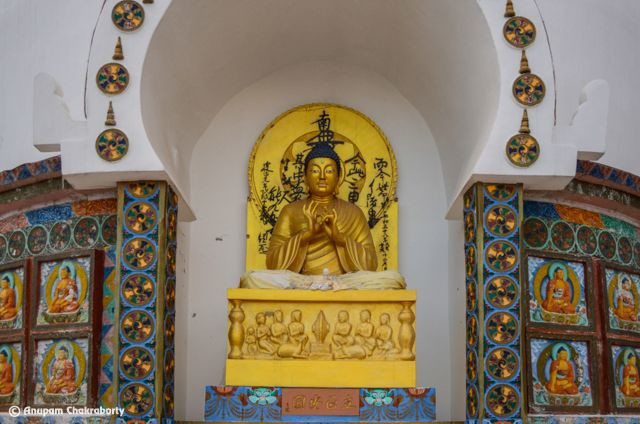 Lord Buddha sitting on the platform ‘Turning Wheel of Dharma 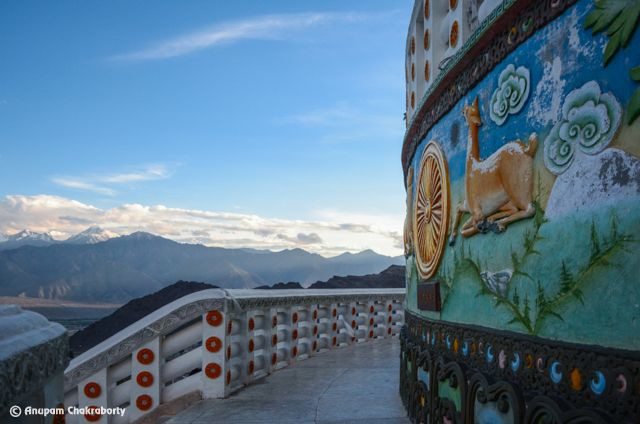 The First Level of Stupa

IT ALSO FEATURES another big Dharmachakra (wheel) with two deer on each side. Many small images of Lord Budha are engraved on the wall of stupa and painted with vibrant colour. 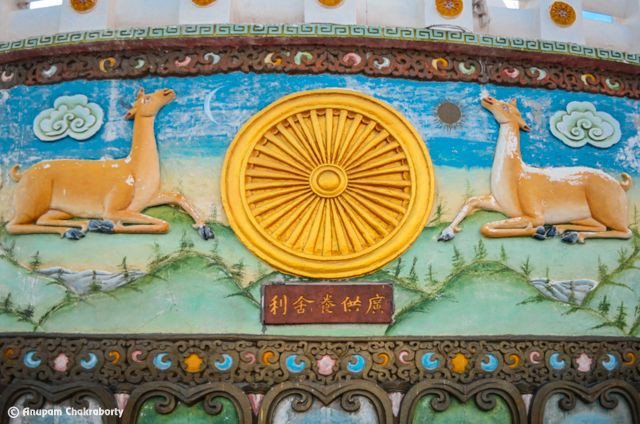 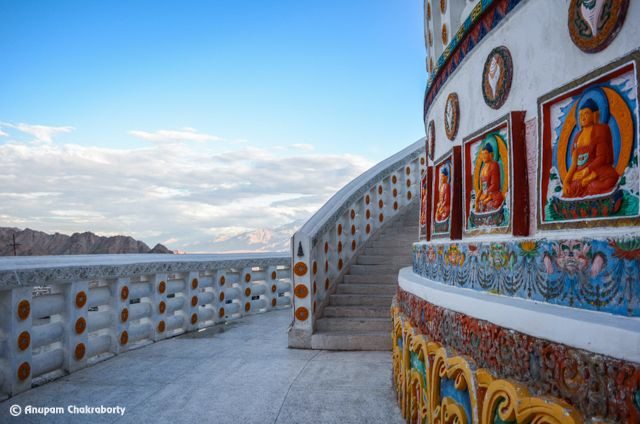 FEW STAIRS from the first level led us to the second level. This level has the reliefs portraying the BIRTH, DEFEATING THE DEVILS and MAHANIRVANA of Lord Buddha. 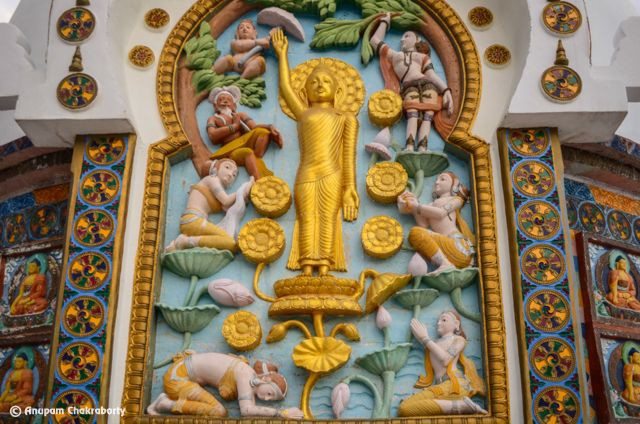 The Birth of Lord Buddha 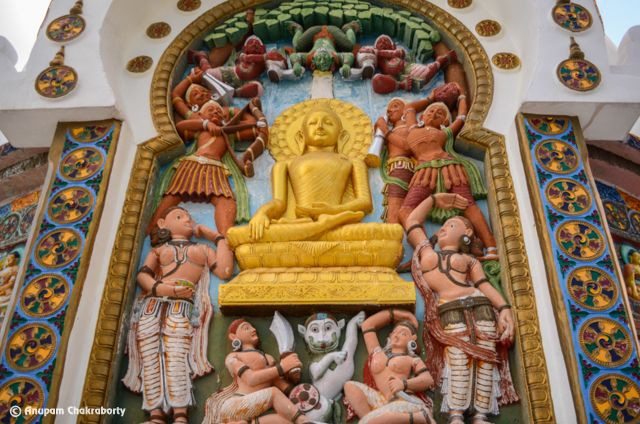 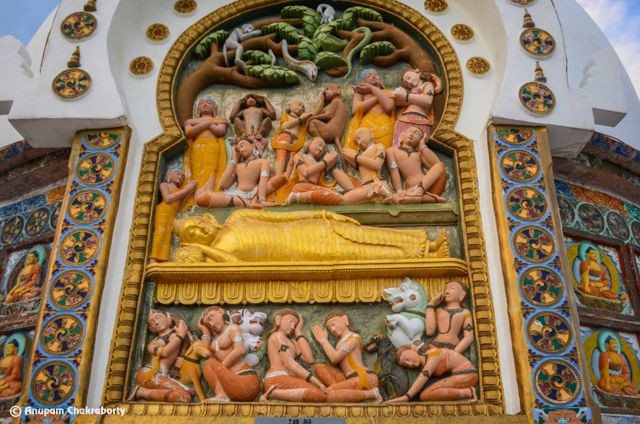 The death (or mahanirvana ) of Lord Buddha

THE TIME to visit Shanti Stupa is between 5:00 a.m. and 9:00 p.m. when it remains open for the visitors.  Sunrise and sunset are considered to provide the best views from Shanti Stupa.

A flight of steps leading down to river is commonly called as Ghat in India. So is the Sindhu Ghat on the bank of river Indus which locates only a few kilometers away from the Leh city.

“WHAT is there?” may be a frequently asked question and one may also see disappointments among many tourists about the place as for them it offers nothing but a place with a small river, few structures and washing place for cars.

BUT THAT IS NOT ALL ABOUT IT! Our country – India is named after this river. It was a must to visit place for me, as I wanted to spend some peaceful time by the bank of this great river. SINDHU GHAT locates at a distance of 8 km from Leh city and can be visited along with Shey and Stok Palce due to their close proximity. This Ghat was inaugurated in 1997 by the then Home Minister Shri L.K. Advani. A three day long annual Sindhu Darshan festival is celebrated here in every June to honour the brave India soldiers.

I found the place very peaceful which lies in the strange scenery of Ladakh on its backdrop. Beautiful and a tranquil river surrounded by barren mountains, the wet sand and the clear water, beautiful skies and a remarkable sunset view that are just appropriate for a poster picture! 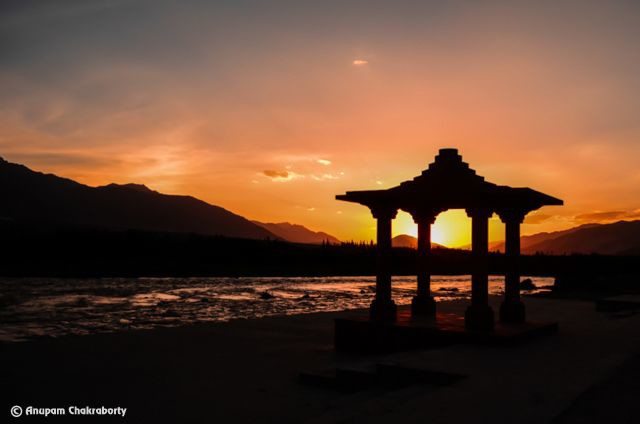 WHO IS SHE? In that evening after the sunset, when I was busy in capturing few more shots at Sindhu Ghat, I saw her coming towards me! Greeted with HELLO she introduced herself a traveler from Switzerland. Roaming alone by the bank of river Indus, she was actually enjoying the afternoon with the gentle breeze, burning sky, rolling clouds, rippling waters and the splendid views of the mountains. It all made a nice combination for her to enjoy a great evening! The place had a magical effect on her and she was more than happy to be there.

SHE HANGED AROUND her family to bring the kids up for more than two decades and lived in her dream for Ladakh.

“Now that you are here how that feels?”, I asked her. She nodded her head twice, smiling she said, “Words are not enough!”

We exchanged our views and feelings and then it was the time to say GOODBYE! She would be in Ladakh for another three months and I believe she might have enjoyed her trip and stay in Ladakh. 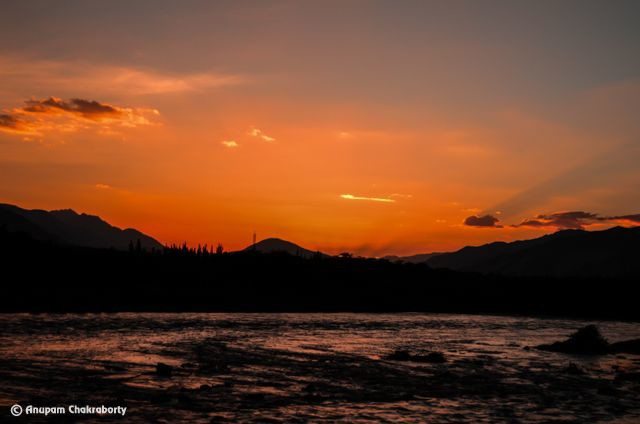 View of sunset from Sindhu Ghat

THERE ARE MOMENTS you cherish and relish forever! So were my Ladakh trip and the evening at Sindhu Ghat – something that no one can take away from me!

“No!” uttered my elder brother (Dada). “It’s not going to be like any normal conducted tour. It will be a different sort of tour.”…