Lamayuru Monastery and The Moonland!

Long ago when I saw a photo of ‘Moonland’ I was very much impressed and keen to see the place. But where it is? Though “Moonland’ does not have any Indian postal code or a milestone but it locates none other than in the mystical land of Ladakh, a village called Lamayuru! The moonlike landscape of ‘Lamayuru’ is popularly referred to and called by the traveler as ‘Moonland’! 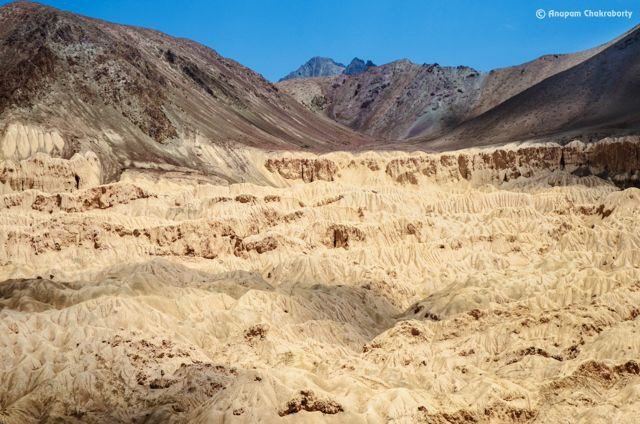 Lies on the way from Kargil to Leh, the village Lamayuru comes after the highest pass on the Srinagar-Leh highway ‘Fotu La’. It was a short drive downwards from Fotu La for half an hour and we arrived at a view point of Lamayuru. The view point is constructed along the highway so that travelers may enjoy the splendid view of the Lamayuru Monastery which locates on a barren mountain top and was built in 10th century. 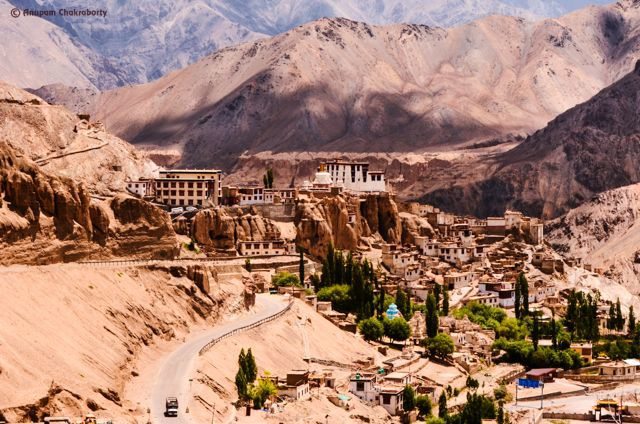 We reached the Monastery. Butter lamps, prayer wheels and colourful prayer flags all were extending to the atmosphere a spiritual touch.  The monastery, though so old, looked to me very well maintained. Neighboring to the monastery, on the mountain tops, were the houses of Lamas (monks). We were told that the monastery housed more than 400 monks in earlier times which now sized down to about hundreds. 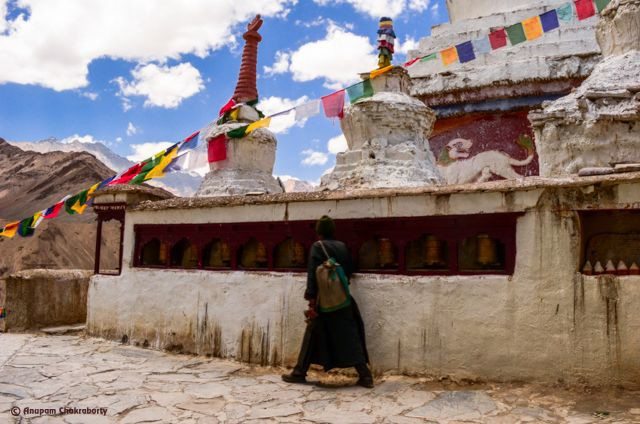 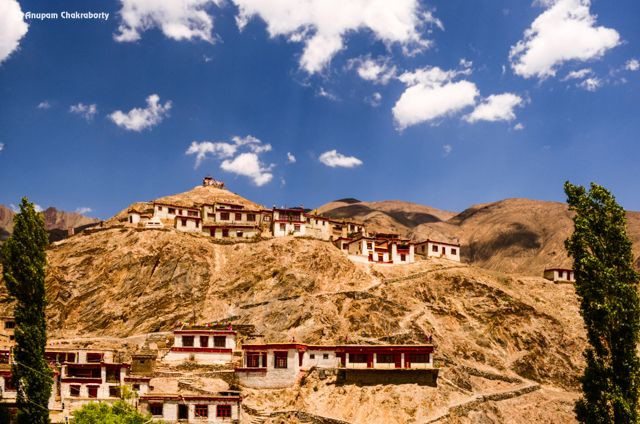 Next to the monastery was awaiting the dreamy Moonland! Stunningly beautiful was the landscape! The soil there was strange and looked like lunarscape! I was standing in broad daylight imagining how this part of earth would look in the moonlight! 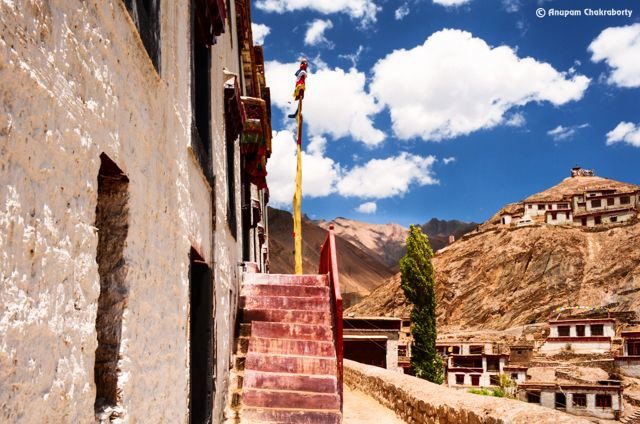 Entry to the Monastery 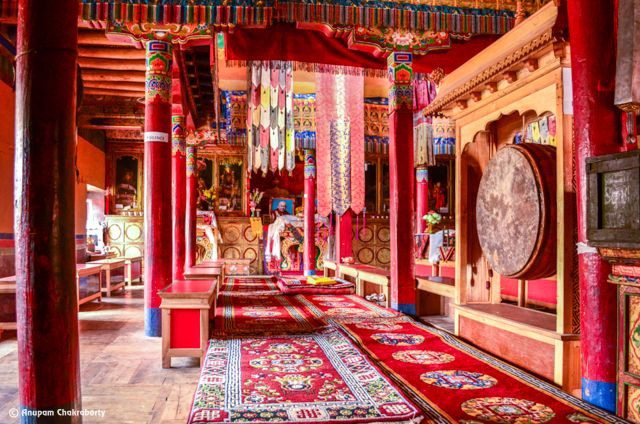 As I entered inside the monastery I saw in the middle of rear wall, the idol of ‘Shakyamuni Buddha’ which is surrounded by many small golden idols of Buddha. I saw many religious texts wrapped in red cloths and preserved in the wall racks. A relic was kept open on the table of head Lama. I went close only to find its scripts were unknown to me.  But, I had no doubt that it contained spiritual prayers and teachings. 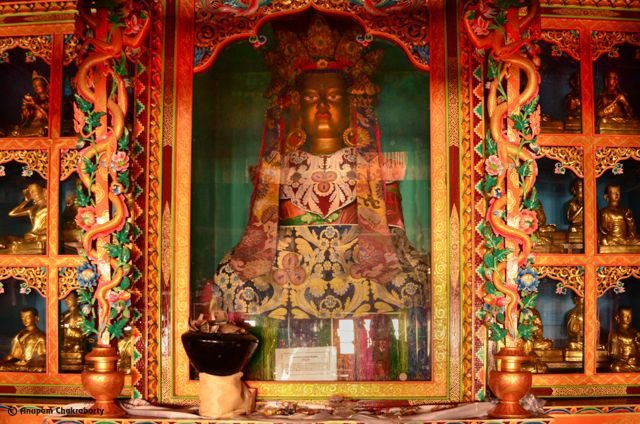 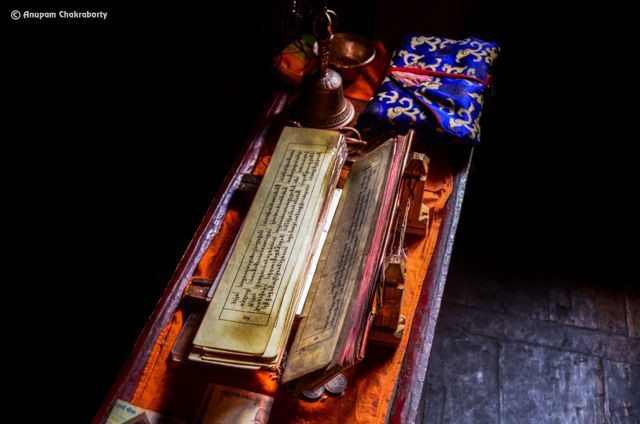 Next to come on our way to Leh was Alchi Monastery. Actually it was not exactly on the highway but about 5-6 km off the Srinagar-Leh highway. Alchi is 57 Km from Lamayurur. A road branches off to the right, crosses over the river Indus and reaches the small village ‘Alchi’. 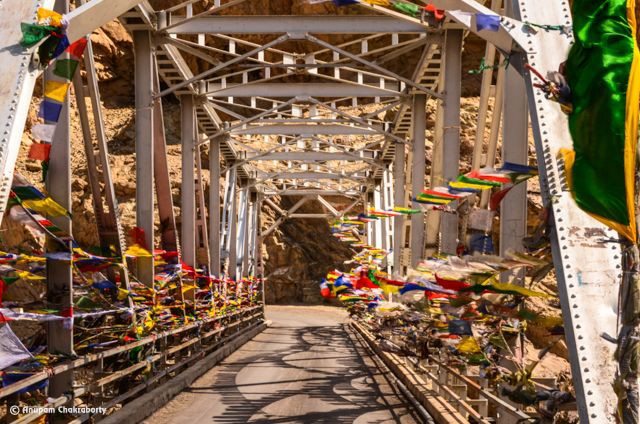 Standing on the bank of river Indus, ‘Alchi’ Monastery is also a monastery of 10th century. It was famous for the mural paintings decorated on its wall. But we saw many of them were destroyed and barely in repairable condition. Photography inside the monastery was not allowed which was not a good news for me! However, photography around the temple is allowed and one is to satisfy with that! 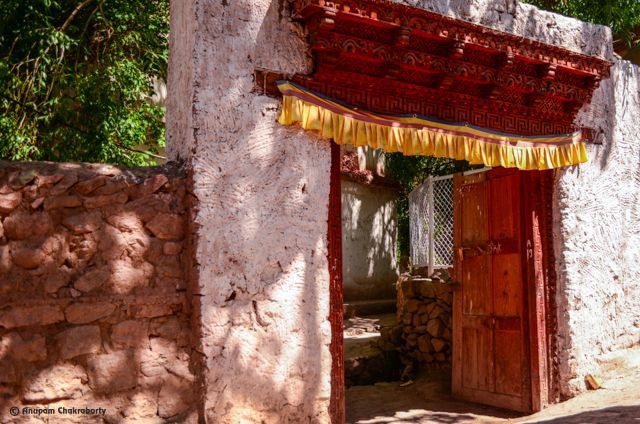 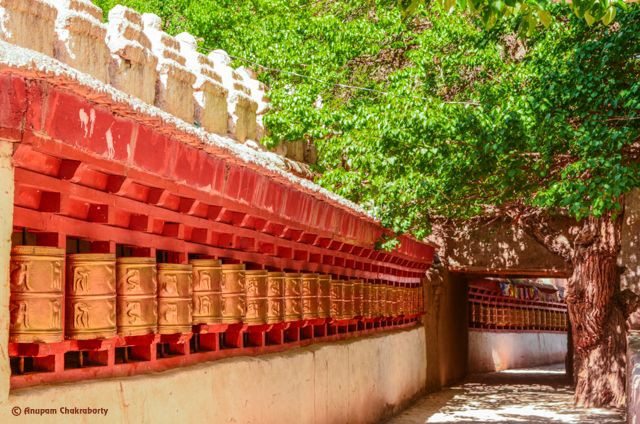 Prayer Wheels at the Monastery

There are many small temples but two of them are most significant. The main temple (Du-Khang) is the assembly hall and is the largest and oldest preserved structure of the complex. Another building (Sum-tsek) is a three story building surrounded by wooden pillars and is carved with the figures of animals. The middle arch of the temple depicts seated Buddha with deity ‘Tara’ in the right and ‘Bodhisattva’ to the left. It houses a tall statue of Maitreya Buddha. 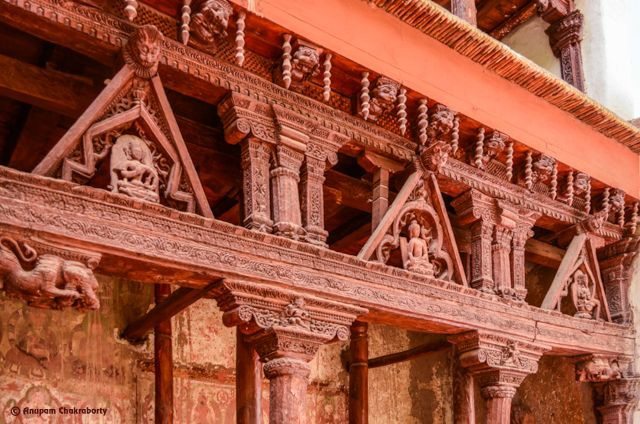 Outside the monastery we saw mani stones nicely decorated with colourful flags. There are also many road side shops selling idols of Buddha, Buddhist deities and many souvenirs to take home. Small ‘Rampuris’ (knifes) were selling there at an exorbitant price of Rs.6000/-. With all of our curiosity, we availed its free of cost look and demonstration! 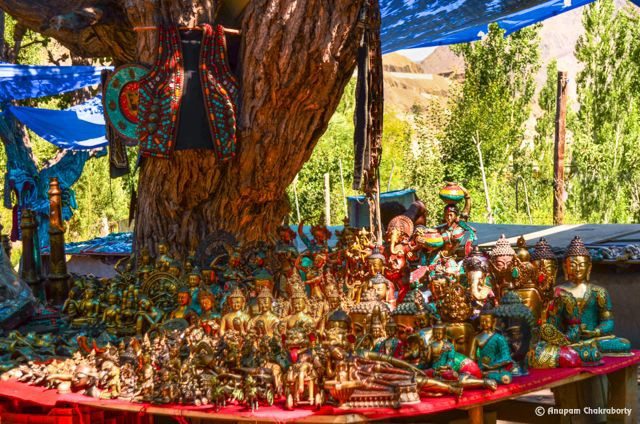 A shop near the Alchi Monastery

The Alchi Monastery is managed by monks from the Likir Gompa which was our next destination. Likir Monastery is only 19 km from Alchi and we covered it in half an hour drive.

Alongside the valley of river Indus, Likir Monastery is located on the top of a hill. Once we entered inside the gate we saw big red prayer wheels on each side of the entry gate. 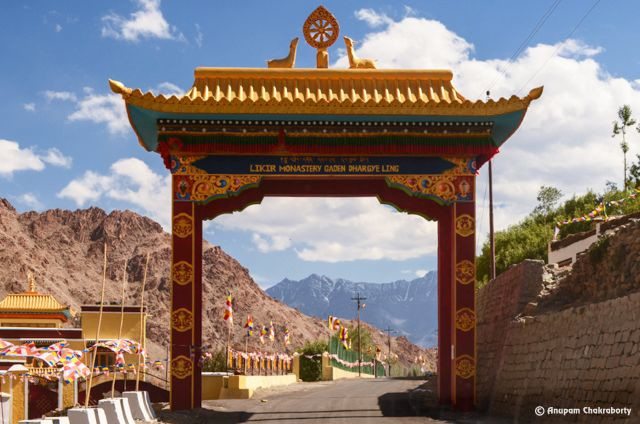 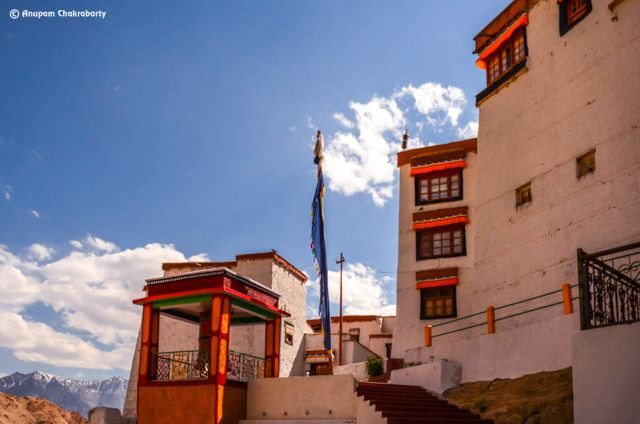 We climbed up stairs to enter inside the courtyard and saw the assembly hall on the other side. Few stairs led us to the inner sanctum. An eleven headed statue of Avalokitesvara (the bodhisattva – Deity of compassion) with thousand arms is placed in the middle of rear wall. 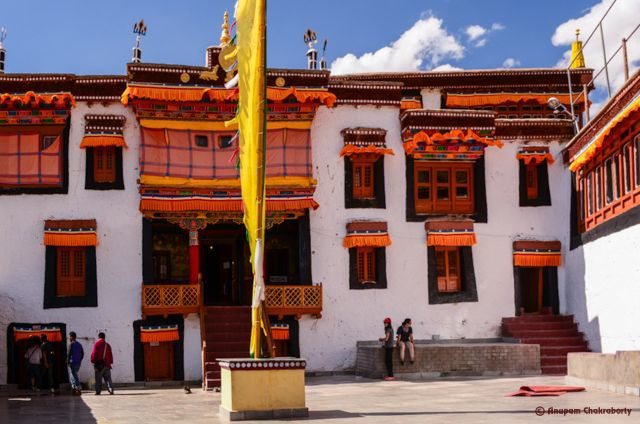 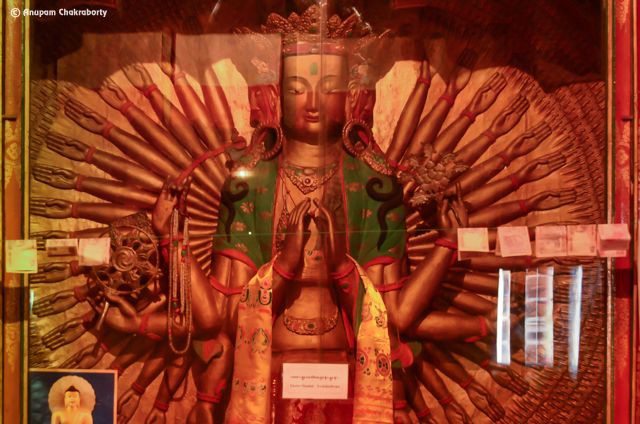 The side walls are painted with images of Shakyamuni Buddha and thangkas are hanged downwards from the ceiling. We also saw a good collection of manuscripts in this monastery. 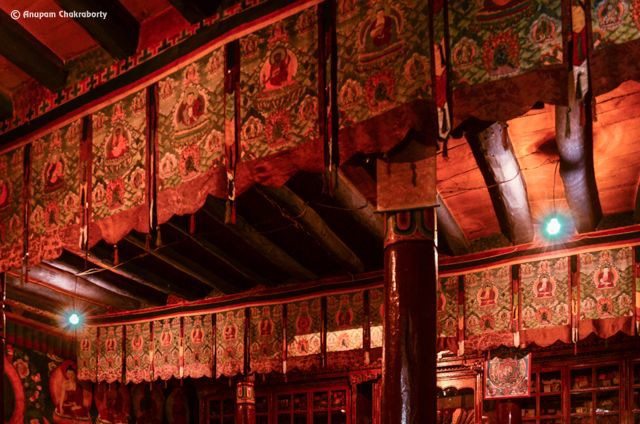 We went through the exit door and saw a tall gilded statue of Maitreya Buddha (Future Buddha) that was shining bright in the sun sitting on a roof. 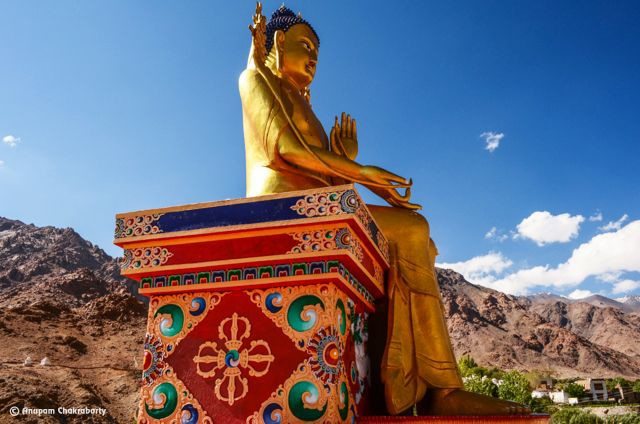 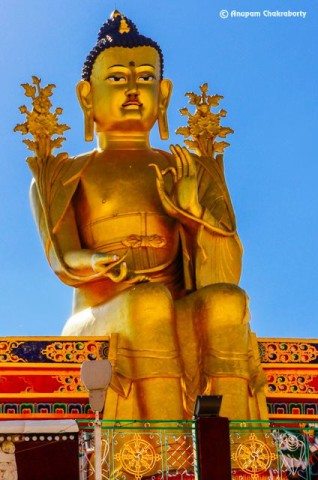 The Route Map from Fotu La to Likir Gompa

We continued our journey towards Leh which locates at a distance of 64 Kms from Likir.

I will come back soon with stories on Basgo Palace and Gompa, Confluence of Zanskar and Indus River, Magnetic Hill, Gurudwara Pathar Sahib and Spituk Monastery in my coming post. Till then-