Though enquiries about destinations, main attractions and places of interest are very common about any tourist place but they seem to be meaningless for Ladakh! It is beautiful not because of any particular spot or attraction, but for the journey therein which itself makes it a heaven for any traveler. What we saw were splendid! Nothing I described is in exaggeration nor did I find appropriate words in appreciation.  The landscapes are stunning, sky- so alluring to take your eyes off and the road- full of surprises!

We drove around 45 minutes from the Likir Monastery and stopped at a place with no name of it. The highway from there looked as if to meet the horizon, a gateway of heaven! Such are the views around everywhere in Ladakh! Such are the feelings that every traveler experience in Ladakh! 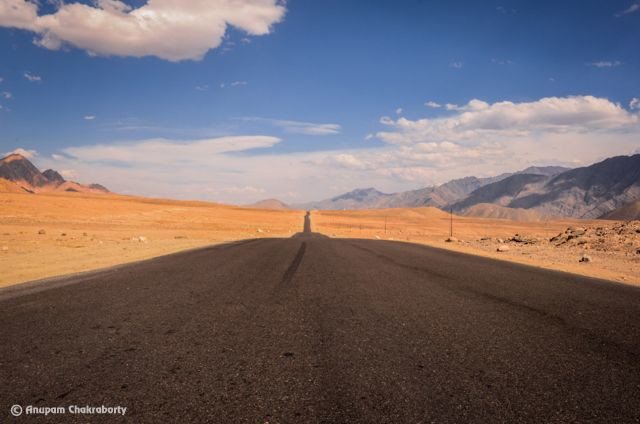 The Road to heaven! 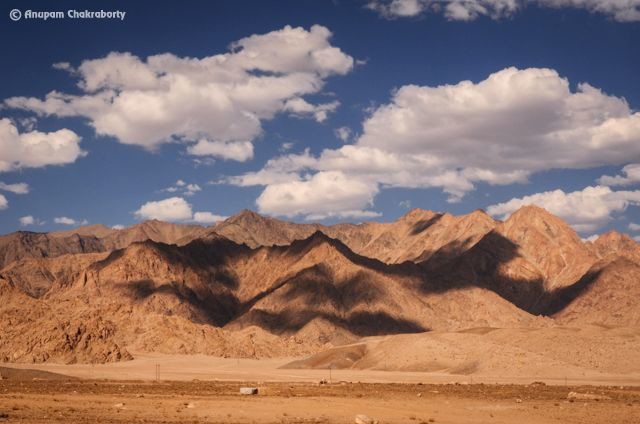 A further drive of 15 minutes, we reached the point where from we could see the Basgo Fort.  Located on the mountain cliff by the bank of river Indus, the remains of Basgo Palace stands high above the village. It was once an important cultural and political centre.  It was a Palace, but now in ruins and is mainly known for its monastery. There is a road to the Gompa but for want of time we skipped the visit and continued our journey towards ‘Sangam’.

In India meeting point of two or more rivers are called Sangam. The most popular is the “Tribeni Sangam” of Allahabad which is the confluence of river Ganga, Jamuna and Saraswati.

The Sangam or confluence of river Indus with its tributary Zanskar lies 40 Km before Leh on the Srinagar-Leh highway and is a spectacular place to stop over. 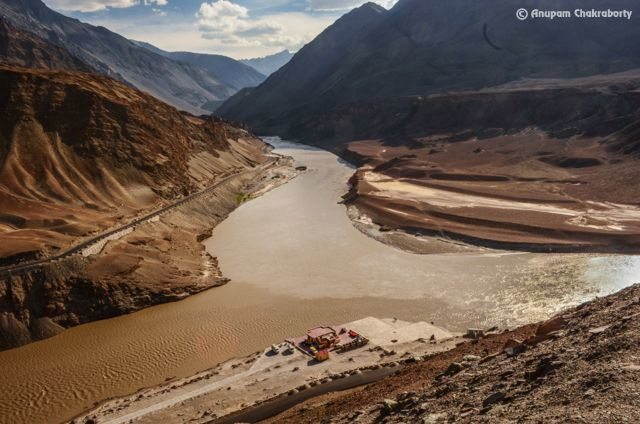 Sangam-confluence of River Indus and Zanskar

Zanskar, the tributary of Indus flows down from the top and meets here with Indus which is flowing from left (Leh) to right (Basgo-Alchi-Khalsi-Dah-Skardu). Originating from Tibet, river ‘Indus’ enters into India and flows through the region of Ladakh. It flows through Leh and after meeting with Zanskar runs through ‘Skardu’ for entering into Pakistan and finally falling into Arabian Sea.

A road took us down to the river side of Indus. We saw that the water of Indus was slightly clear than that of Zanskar. There was also a road (Zanskar Valley Road) that went upward by the side of river Zanskar to a village call ‘Chilling’.  But one can only see the spectacular view of the confluence from the Srinagar-Leh highway which runs through the top of mountain.

We went ahead to experience the much acclaimed ‘Magnetic Hill’ which has been puzzling the travelers for long. It locates by the side of Srinagar-Leh national highway. While travelling from Kargil it comes 30Km before Leh and locates at an elevation of 11000 feet above the sea level. 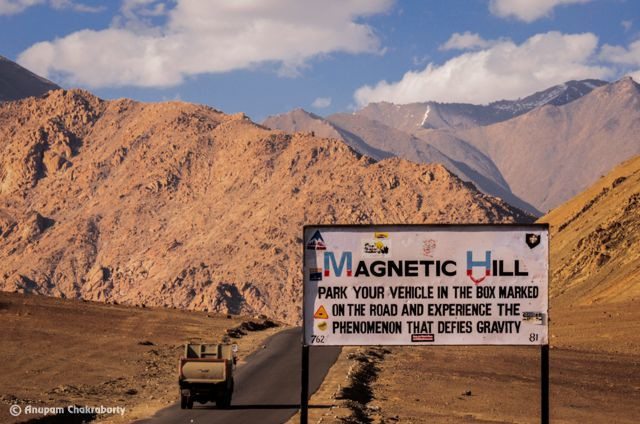 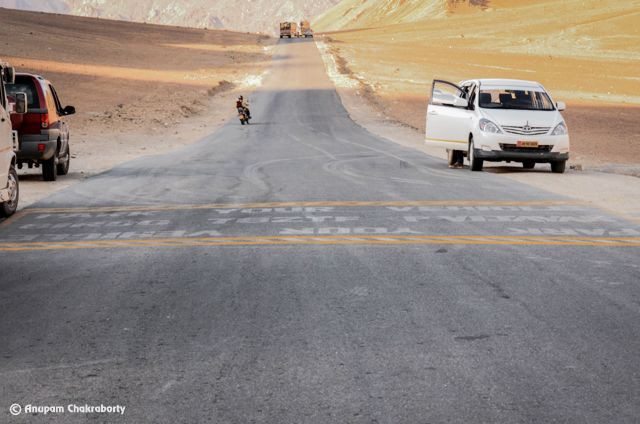 Box marked on the highway to park Car there

We reached the point and saw a signboard of BRO that invites the travelers to park car inside the box marked on the road and experience the phenomenon that defies gravity. However, not too much satisfied with the claim, few travelers were driving to the hills on the right.  A hill on the right is marked as ‘Magnetic Hill’. 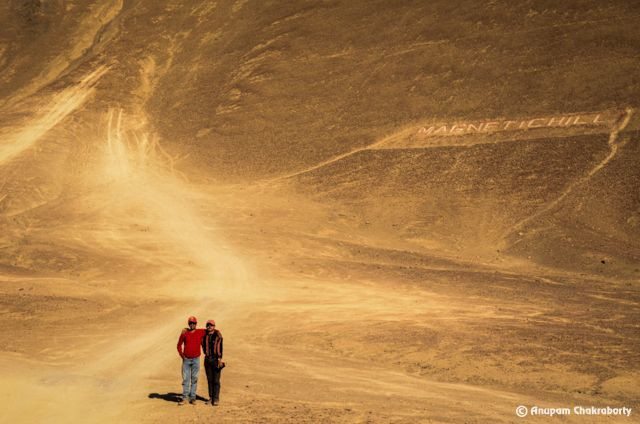 My friends at Magnetic Hill on the right

The myth is that, the hill has some magnetic properties which pull the car uphill if parked in neutral gear. To verify it, ‘Sachin’, a traveler from Delhi drove the car uphill with one of his friend. It was then many others to follow them. While some were happy to drive uphill and taking photos on it, some were returning confused! We did talk with ‘Sachin’ and his friend. Though not sure, but they did feel something on the uphill.  Was it due to magnetic property or an optical illusion could not be confirmed! Be that as it may, the magnetic hill pulls many tourists if not the cars! 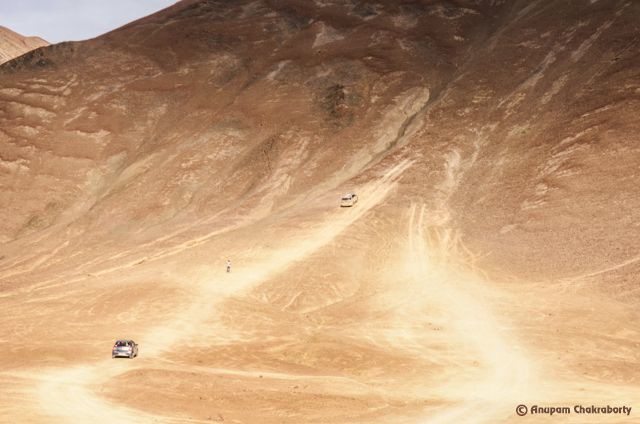 Travelers with their car at the Hill 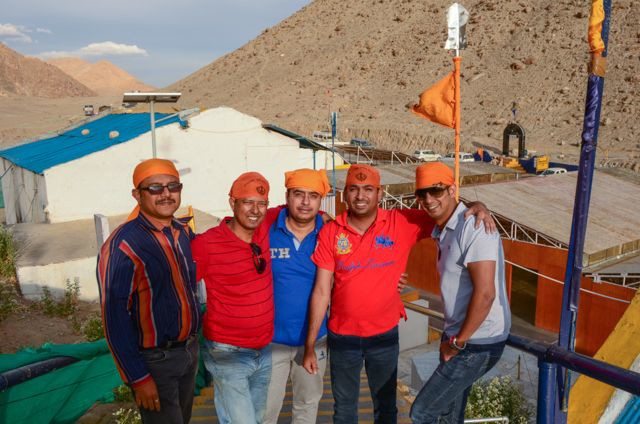 My friend Prabir & Ranen with Sachin & his friends

Our journey so far was blessed with breathtaking vistas of nature. We could not expect to get more than what the landscape offered. It was now time to have darshan of Sri Guru Nanak Dev Sahib. We stopped at Gurudwara Sri Pathar Sahib which locates 27 km before Leh on the Srinagar-Leh national highway. This Gurudwara was constructed by Indian Army and is maintained and managed by them. 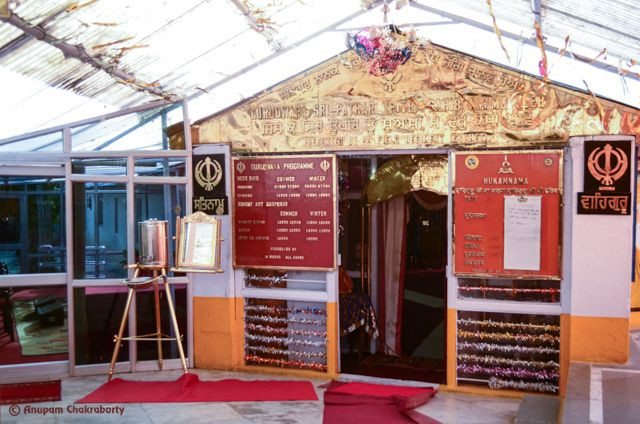 Belief is that, while Guru Nanak was returning from Tibet to Punjab through Leh and Srinagar, he meditated here.  A demon that lived here and was responsible for horrifying the locals, with an intent to kill the Guru on meditation, pushed down a boulder (Pathar) on him from the nearest hill top but it stopped against Guru Nanak’s back and softened like wax. Realizing the spiritual power of Guru, the demon fell at the feet of Guru and begged forgiveness.  Thereafter, the demon gave up all evil deeds and lived serving the people. 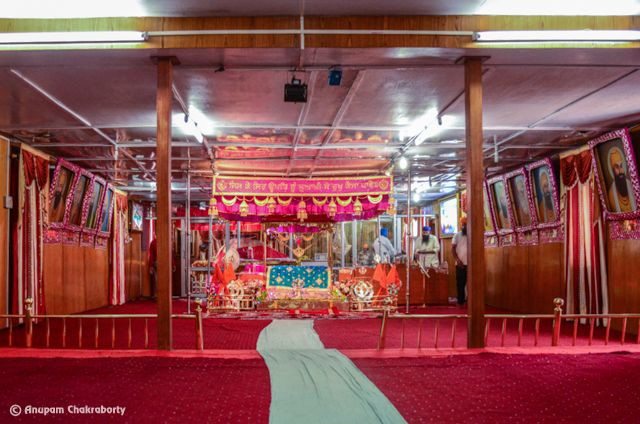 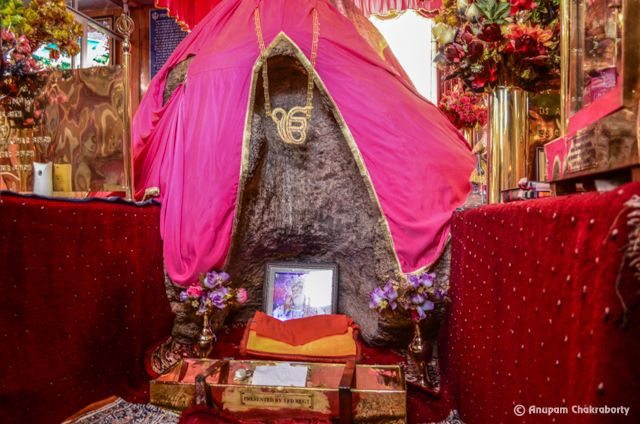 The Rock thrown by demon on Guru Nanak 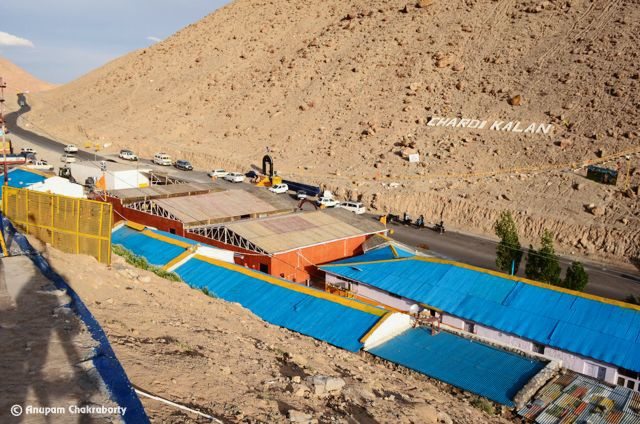 Chardi Kalan Baba Nanak Di’ is engraved on the opposite hill of Gurudwara, road to Leh goes upward 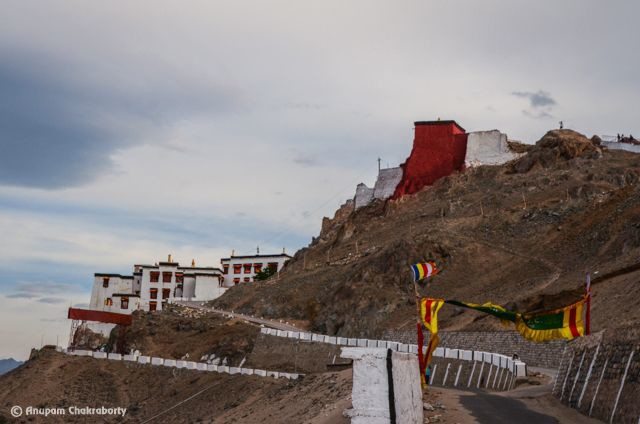 We set off the journey to Leh and after travelling about 18 Kms reached the Spituk Monastery. Perched on a high hill overlooking the Indus River, Spituk Monastery locates about 8 Kms away from Leh. It was founded by the King of Leh in the last 14th century. It houses the statues of Shakyamuni Buddha, Avolokitesvara and deity Tara. 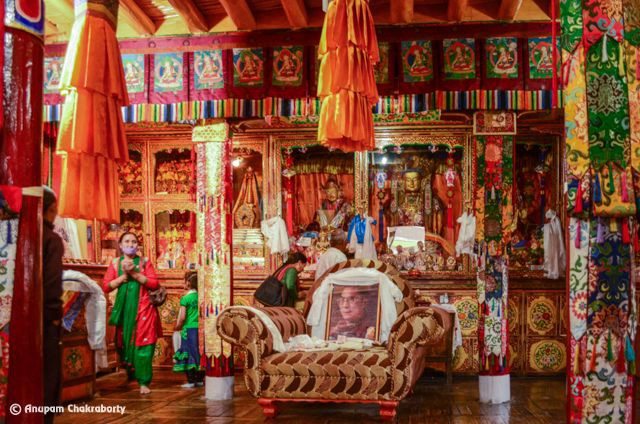 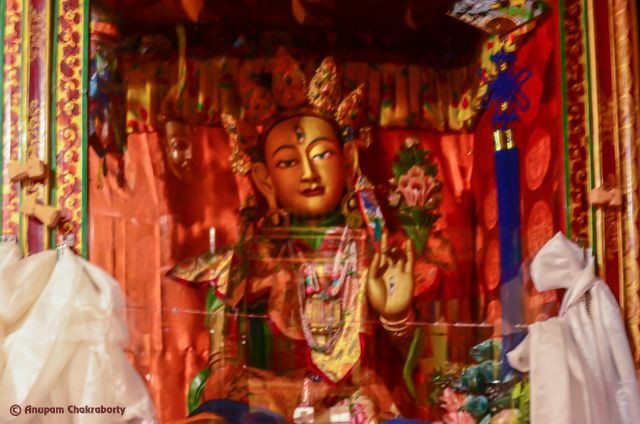 By the time we completed visit of the monastery, the sun went down and it was time to rush towards Leh. 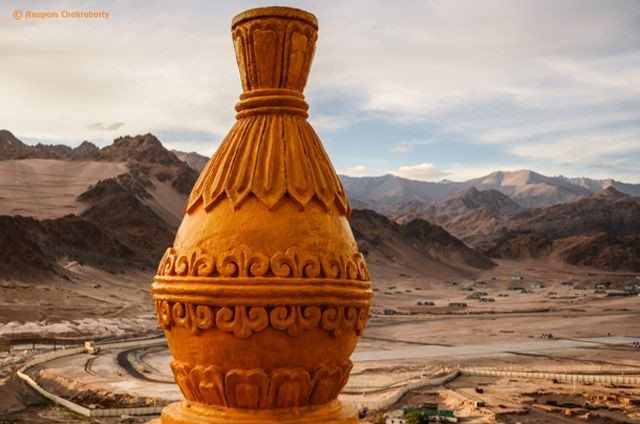 Leh can be seen from Spituk Monastery

We were reaching Leh one day in advance and our accommodation was booked for the day to follow. It was the period of Kalachakra Festival in Leh and all hotels were occupied in full. However, it was a matter of one night and somewhere in the town a room was awaiting our arrival!

The route map from Likir to Leh

I will come back soon with stories on Leh- the capital city of Ladakh in my coming post. Till then-