How can one skip visiting the century old monasteries in Ladakh? Visit to Leh Ladakh remains incomplete without a visit to its Monasteries. It not only takes you to a spectacular site but also gives an opportunity to know about Buddhism.

Thiksey Monastery is one of such beautiful monastery located at an altitude of 3,600 meters (11,800 ft) and 18 km from the main Bazaar of Leh city. 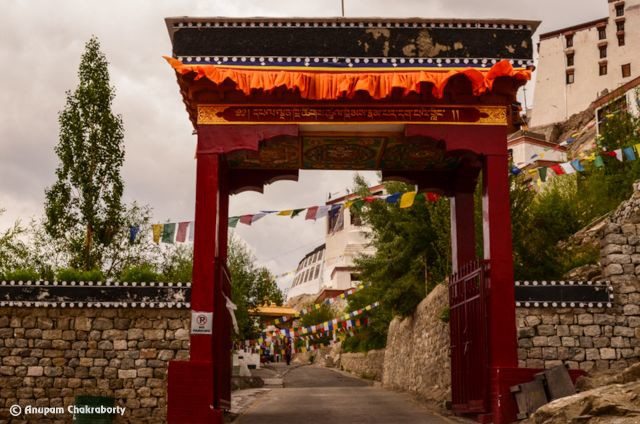 First entry gate of the Monastery

It has a motorable road and we drove upto the entrance gate. It took us to another gate which is beautifully designed with images of two deer on the top of it. After entering into it we climbed few stairs whose sides were dotted with many small prayer wheels. 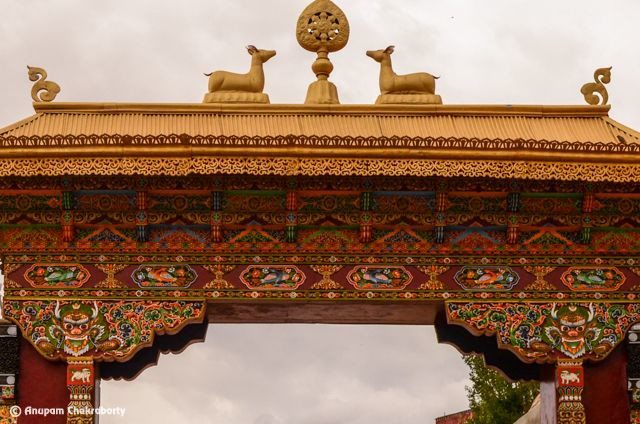 Entry Gate with the images of deer 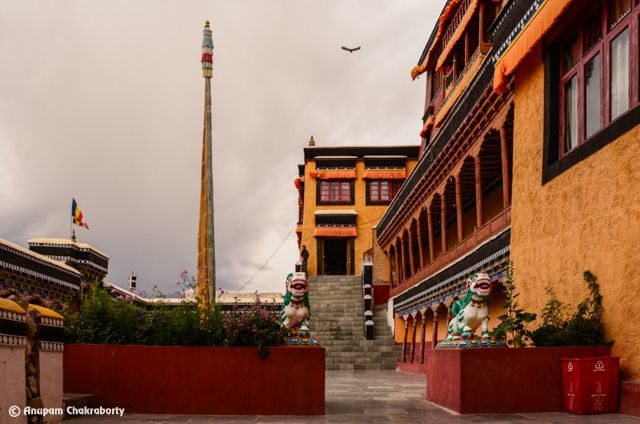 The yellow building in the front is the main assembly hall 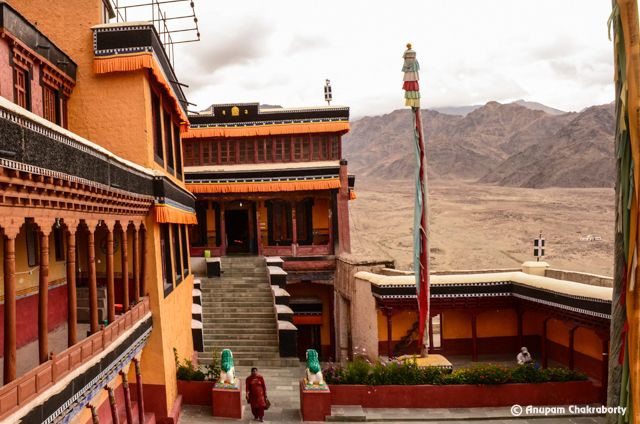 Maitreya Temple is on the opposite of Assembly Hall

But the main point of interest is the Maitreya Temple which contains a 15 meter tall statue of Maitreya Buddha (Buddha of Future) covering two storeys of the building. 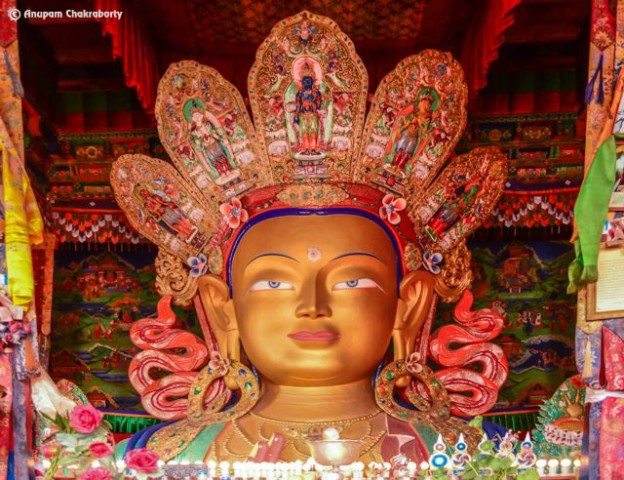 The statue of Maitreya Buddha at Thiksey 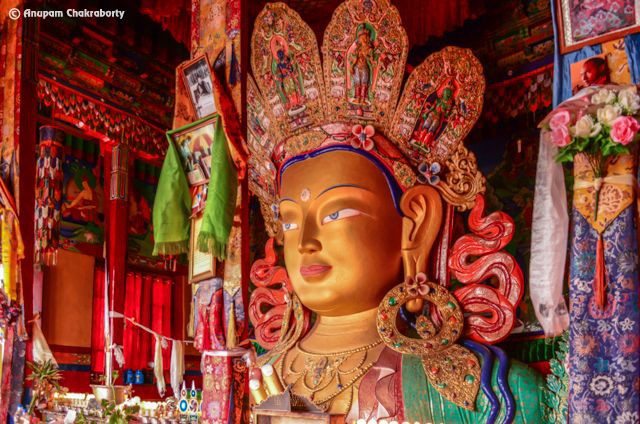 The Buddha of Future, Maitreya Buddha, is believed to be born in the present day Varanasi after approx 2440 years from now. Will he then look the same? 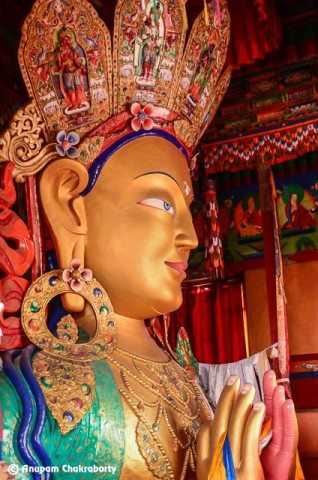 Maitreya Buddha from another angle

Visiting Hours and Entry Ticket to the Monastery 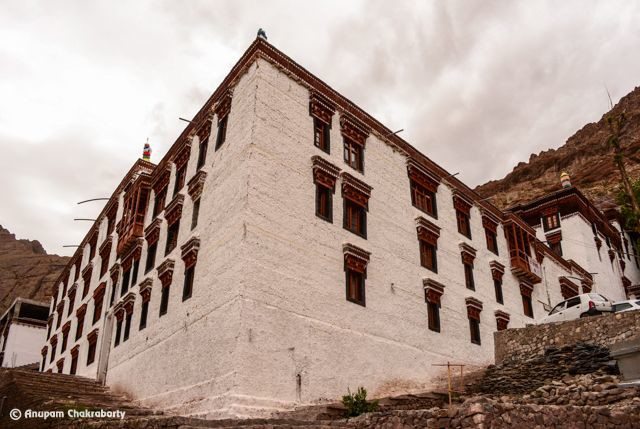 Hemis Monastery is the largest monastic institution in Ladakh. It belongs to the Dragon Order of Mahayana Buddhism (or the Drupka Lineage).  Hemis has more than 200 branch monasteries in the Himalayas and more than 1000 monks under its care. It is an important living monument and heritage of Himalayas. 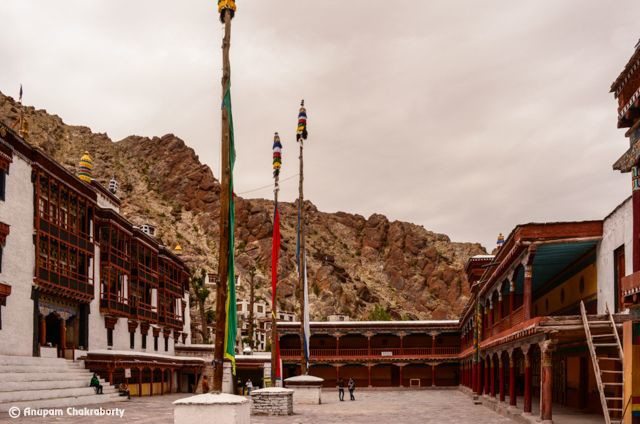 We entered into the monastery and found a huge courtyard surrounded by temple, galleries and museum. The main temple of the monastery is considered to be a very holy temple where daily prayers (pujas) are performed. Photography inside main temple is not allowed in Hemis.

After visiting the main temple I went to the upper level where I saw a huge image of Guru Padmasambhava, the founder of Tibetan Buddhism.

Hemis Monastery locates around 45 Kms from Leh city and can be visited on the way to or returning from Pangong Lake.

Visiting Hours and Entry Ticket to the Monastery

The School of 3 idiots

The great Indian Films! They make places a popular tourist spot out of nowhere!! Amir Khan Starrer “3 idiots” is one of such Indian Boolywood movie. Some parts of the film were shot at Pangaong Lake, Ladakh and some in a school near Leh named “The Druk White Lotus School”. The school is located 15 km from Leh town on the Leh-Manali highway in the village Shey. This school became a popular tourist spot after huge success of the movie and after damage of its building by cloudburst that struck Leh on August 2010. The actor Amir Khan visited the school after the incident and helped to raise funds for rebuilding damage structure of the school. 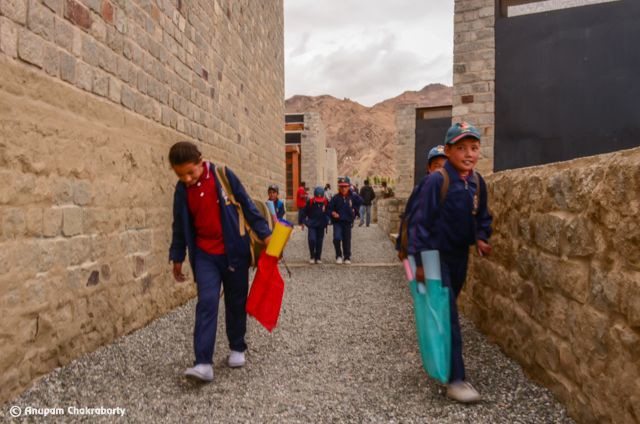 After popularity of the movie, the school receives a large number of visitor everyday and a person has been deployed by the school management for guiding the visitors. It has a visitors centre from where one need to take permission and the visiting time is 8AM to 1PM and 2PM to 6PM.

ALL IZZ WELL was a popular song of the movie 3 idiots and for us it was all well too. Because the school opened after vacation on the day we visited the place. 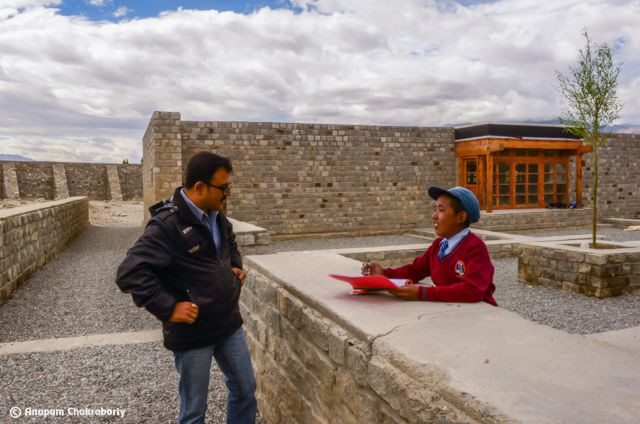 My friend interacting with a student

It is a modern school where students study Bothi (local language), English and Hindi, along with sciences, maths, arts and sports etc. It has residential blocks too for children from Ladakh’s remote areas. 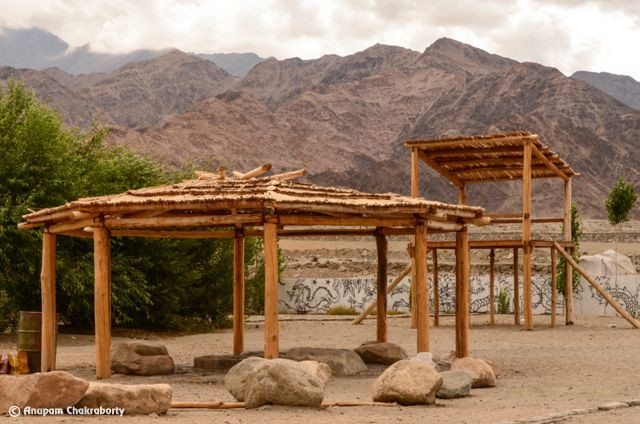 In the film “3Idiots” the actor in lead role Rancho (Amir Khan) disappeared and was traced out by his friends and former classmates to Ladakh. It was here, in the movie, all of Rancho’s dreams came true. 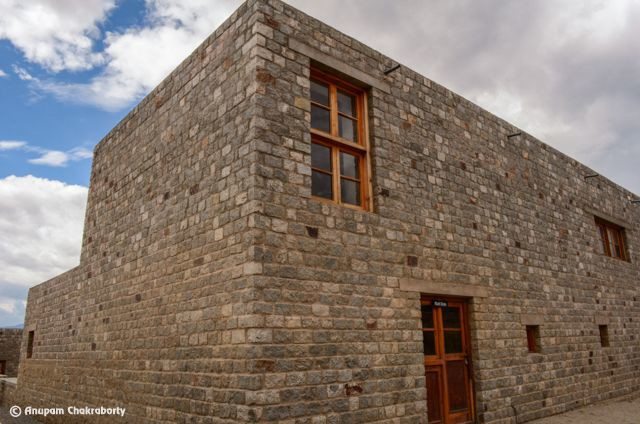 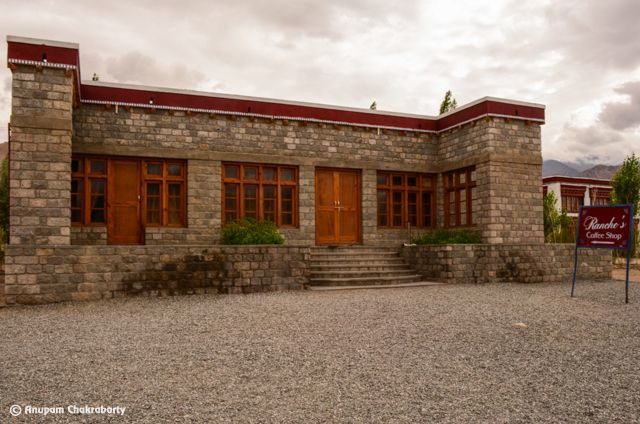 The school has a coffee shop which is named as “Rancho’s coffee shop”. The Great Indian Film! They can really make a place popular out of nowhere!!

I will come back soon with a post on some other places in Ladakh. Till then-

Thiksey and Hemis Monastery and The School of 3 idiots! was last modified: February 16th, 2022 by Anupam Chakraborty

We were speechless, and at peace… Though the moment before we were tired, wiping the sweat, cursing the horseshit around us and trying to…