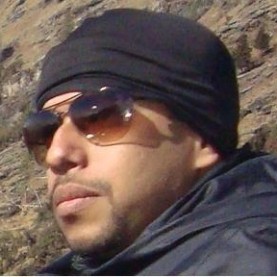 Vishal and I rarely disagree on anything. So, when Vishal proposed a bike trip, the excitement got to me instantly. The last trip we made was quite a while back and the longing for the next one was getting stronger by the day. The Independence Day falling on a Friday gave us a long weekend and we made it longer by taking the Thursday off as well. The initial plan was to go up to Joshimath and back, but that had to change.

Sitting there on the green patch overlooking Spider Colony, we felt exactly how a falcon would feel when flying high. For as far as we could see, there were just waves of misty mountains. Paahji and I felt lucky to be living our lives exactly the way we wanted to. On our back was an intimidating rocky wall, behind which lay Deoban.
A kilometer or so up from that place, we started spotting snow on the road side and then, all hell broke loose. The first 20-foot stretch of snow on the road made me really nervous. There were paths through the snow made by what must have been army vehicles, but those paths were strewn with treacherous black ice. Paahji looked nervously at me as I struggled through that stretch. He was slightly better off with his long legs working as outriggers. There was another such stretch in the next corner and then there was another. After a number of snowed stretches, we got to a Y point where the road on the right went to Mundali and the one on the left went to Deoban. We took the left one and as we got closer to Deoban, the quantity of snow on the road kept increasing. Fortunately, the road was not too steep and it was somewhat manageable. Suddenly, Paahji took a left turn and stopped. He asked me where we were heading. The road ahead had two feet of snow for as far as we could see and we definitely couldn’t take our bikes through that. Paahji looked at me with a huge question mark on his face. We got off the bikes and looked around. Wow! What a sight! The place was about 4 kilometers short of Deoban. There was a shallow gorge that slid down to a frozen pond. The slopes were heavily snowed on all sides except for the areas that were getting direct sunlight. There was a nice and flat green patch on the right of the pond where tree-cutting work must have been on till recently. Loads of firewood lay abandoned alongside freshly cut logs.

“For we are bound where Mariner has not yet dared to go, And we will risk the ship, Ourselves and all.” -‘Passage to India’…

“If you can imagine a hidden place, tucked safely away from the world…concealed by walls of high, snow-capped mountains…a place rich with all the…

I’ve heard the call of the wild since a very tender age, but never really answered it the way I wanted to (when I…

“Where are you from?” asked the unassuming bong in a pink half sweater. However disappointed I was with him, I had to answer, “From…

Renukaji in Himachal Pradesh is a tourist destination with religious significance. The place is a scenic combination of a lake, a temple, an HPTDC hotel, a wildlife sanctuary, and all these are surrounded by high mountains. One can spend a few peaceful days watching the mahseer swimming in the lake or the leopards, bears and lions (got to be lucky to see them) in the sanctuary. We were four guys on two Royal Enfields on a fun trip and we found Renukji to our liking.

Sonu and I are well capable of lifting more than 100 kgs. The rock couldn’t be lifted. It felt like it was bolted to the ground but strangely, it could be rolled easily from one place to another. The high priest smiled at our embarrassed looks and called Paahji and one more guy to join hands. Together we put nine fingers under the rock and chanted ‘9-9-9-……’ and stood up slowly.