It was the third day for us in Kashmir, a lovely morning and still undecided which part of Kashmir was to be explored that day. I got a chance to talk with a senior member of another tourist party staying in the same guest house who incidentally were leaving that day only for Delhi. Knowing that we were planning to go to Gulmarg or Pahalgam that day , the Gentleman suggested that though these were popular tourist destinations and almost everyone visited there but if we were going to see snow then it would be useless to go and he suggested further to go to Sonamarg instead where we could feel chilly winds, huge tracts of Snow on THAJIWAS glacier at Sonamarg. I presented the summary of this chat to my family members and it was decided unanimously that… Barf to Dekhni Hi Hai…… so no Gulmarg and Pahalgam at least for that day and everyone was ready for Sonamarg. Though our woolens were still packed as Srinagar was not so cold but that Gentleman suggested that we would need our woolens at Sonamarg for sure.A light breakfast and all were ready to go by 9.30 A.M.  I especially instructed the driver of our vehicle to check the tyres and other basic things of the vehicle as we had to go about 90 km from Srinagar.

Sonamarg is on the way from Srinagar to Leh road and is a popular destination to visit. Road condition somewhere is good but at some places the condition of road is very bad. We passed through 2 check posts out of which one was of Rashtriya Rifles. On the way to Sonamarg one can see a lot of army people, reason perhaps at that time was that Yatra to Sri Amarnath was about to start in a few days and security had been enhanced, may be. After travelling about 40 km, river Indus becomes your companion and one can just soak into the beauty of clear and very fast flowing water of this river. While we were observing the beauty of river Indus, the news from Mr. Bhajji (our driver) that one of the tyres had got puncture came as a bolt from blue. Luckily the puncture shop was near the point where tourists stop for some time to gauge the beauty of river Indus. So this came as a breather for us also and we got about half an hour to stop by on the bank of this majestic river whose water was as clear as purity. 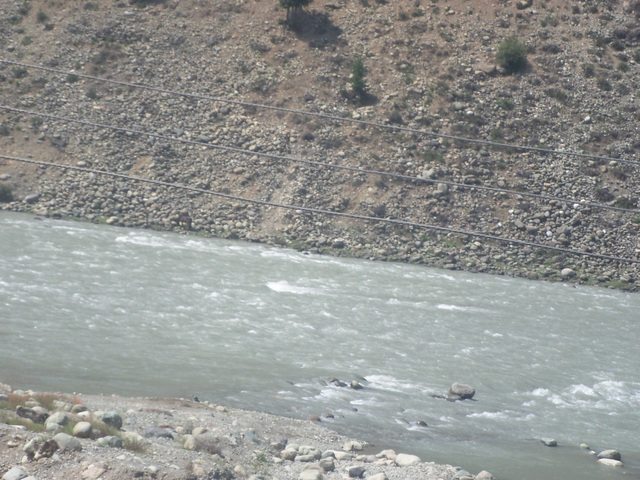 River Indus with all its fury 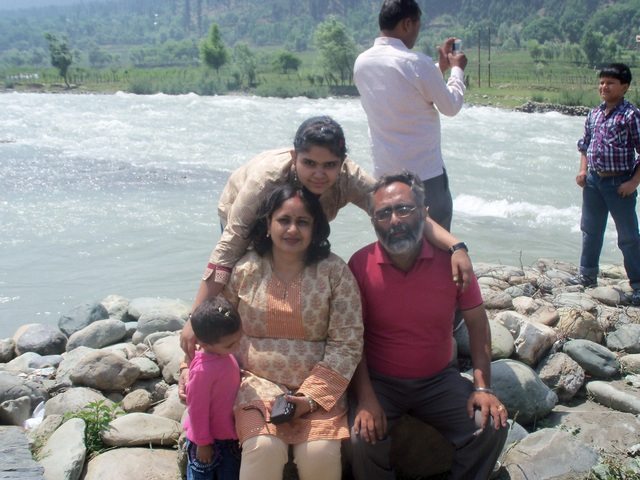 All of us came out from our vehicle and were welcomed by the cool breeze. We went forward towards the river and sat on the Boulders and put our feet in the freezing water of Indus. Ooooohhh was the reaction of the kids in the party.Water as ice cold . From this point, a bridge on the far was visible to us. And quite flows the Indus was my reaction at that scenario  A shack near the tyre repair shop was there selling tea, biscuits and usual chips packets. I casually asked if some hot Pakoras were available there. His answer was that it shall take some time but we were ready for that as there was some time for tyre to be ready.  We ordered two plates of veg Pakoras which eventually turned out to be only Aalu Pakoras.. Never mind folks as all of us were hungry. The bill was about Rs. 200 for 12-13 small pieces of Aalu Pakoras and 4-5 cups of tea… Not too much if you consider river Indus as your companion. Now was the time to continue our journey. After about one hour from that place greenery on the left side of the road welcomed us. The scene was beautiful. Some hut like structures were visible midst that green patch. This was a resort. On the right side of the road,persons on the ponies going uphill and in the local taxis was the scene. Far away, snow was visible and from the road it seemed very less snow so we thought that Sonamarg wali snow might be far so we carried on our journey, We passed the point of Sonamarg market and encountered the sign board indicating Zozila Pass a few kilometres away from that point. I had a gut feeling that the destination which we were searching had been left behind and it might be that point where ponywallahs and local taxis were going uphill. No one in our group was ready to believe me but when we asked about the snow point of Sonmarg from a passer By , my apprehension came true . That was the point just before the market from where we cou;ld have reached THAJIWAS glacier, the main snow point at Sonmarg. 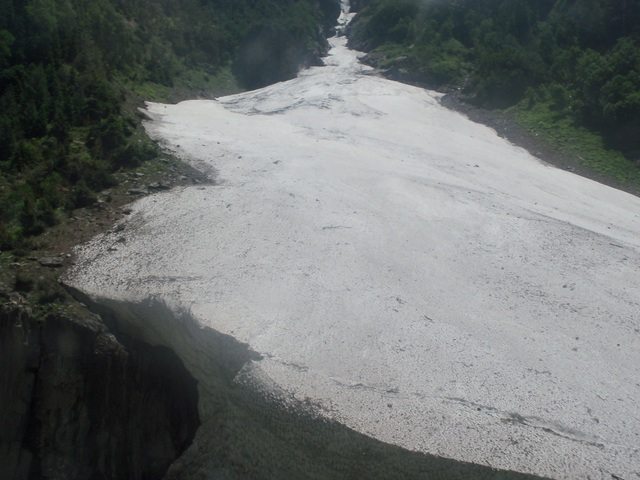 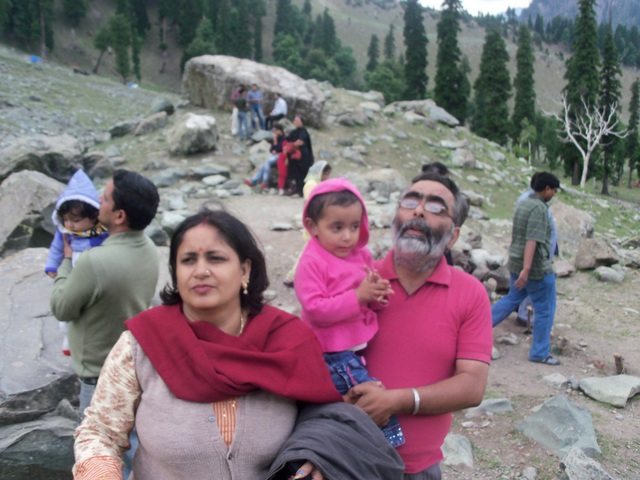 I was trying to take on the chill, at Thajiwas glacier

So with some difficulty our driver turned the vehicle from that point as road was not in a good condition and was narrow and reached that point where we were ordered to stop our vehicle beacause of : YAHAN SE APNI GAADI MEIN NAHIN JA SAKTE AAP WAS THE DICTAT OF A LOCAL TAXI OWNER.  SIRF HAMARI TAXI HI OOPAR JAYEGI….. and we encountered a small barrier there. So option before us was to go on ponies or to board the local taxi but I decided upon the third option to proceed on our vehicle only…. Dekha Jayega.….. Mr. Bhajji was clever enough to place the vehicle among the local vehicles and we crossed the vehicle only to find a toll office on the left side where a person was noting the number of the vehicle. If it was the local vehicle , those were allowed without paying any tax. If the registration number was outside state and not a tourist vehicle registered in Jammu and Kashmir then tax was levied. So folks no option but to pay that tax to reach the main snow point.

A word about SONAMARG: 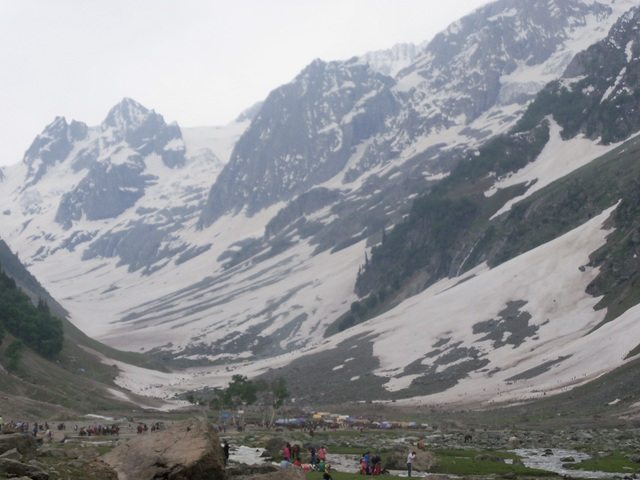 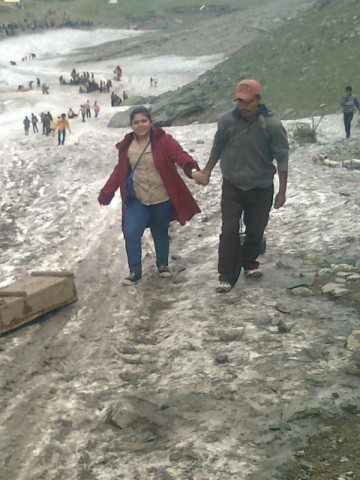 Bhakti going towards the point of sledging

The place lies at the height of 2800 meter above sea level and once it was considered to be the gateway to the famed silk route. I came to know that main town of Sonamarg itself  gets covered in the Snow up to 20 feet in the months of December and January and permanent population of this place is only about 300, rest of being the floating population.

Before embarking our journey to play with snow, we had our lunch at Dogra Dhaba located in the Sonmarg market, perhaps the first shop of the market. Lunch was simple , homely and tasted good.

So folks after parking our vehicle at the point where many vehicles were parked we were still away from the base point of snow about 500 meter  say and we had to cross roller coaster ground, at some points it was plain but rain , the night before had made it slushy. One had to cross a wooden bridge also if one was to avoid a long path to reach the snow base point but the bridge was damaged midway and one had to tread very carefully as some trampoline artist of circus. Both ways were difficult. ground being filled with water one had to take out shoes and ooh so cold was water being in snow area. there were 2-3 shacks in the ground having tea and good old and universal Maggi on the menu list. It was quite chill at the base point of snow and many sledge coolies had sledges in their hands offering rides from a lesser distance and from quite far away from uphill to slope downwards , two options. 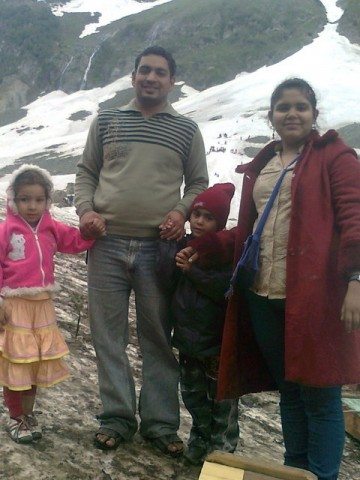 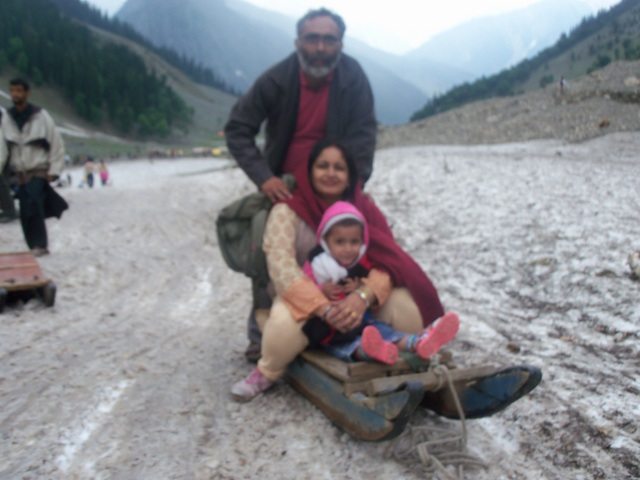 Another view at the glacier

Bhakti decided to have a ride from a medium distance and dear Pavani and her Mummy from a shorter distance. As a tourist it was quite enjoyable but the condition of those coolies seemed to be downtrodden working in such a harsh climate for money that was not on a higher side. Suddenly weather started changing , grey clouds hovered over in the sky accompanied with lightning. It started raining also. Weather had changed its color quite dramatically and it was bone biting chill now especially for kids. When I asked a porter whether this was a regular feature of that place, I got the answer.” MUMBAI KA FASHION AUR YAHAN KA WEATHER KABHI BHI BADAL SAKTA HAI SAAHAB.” Nice answer na… It was quite enjoyable at the glacier though THANDI HAWAYEN LEHRA KE AATI RAHIN, KAALI GHATA CHHATI RAHI and BAARISH KI FUHAREN BHI AATI RAHIN. 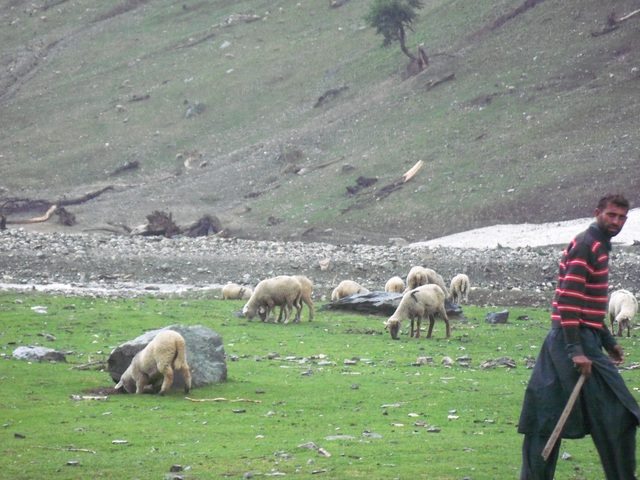 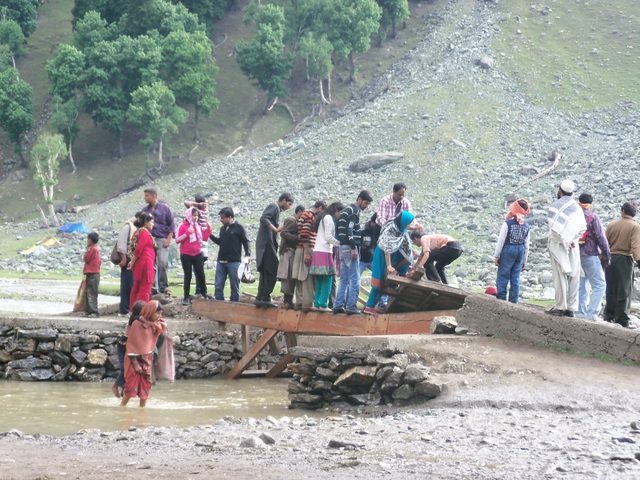 On our way back to the parking point we enjoyed our fill of Maggi noodles also.Then U-turn to Srinagar and had a good sleep that night after such an amazing but tiring journey.

Part I was about mysteries of Bhangarh Fort – based on prevalent notions (online and otherwise), which have endeared a relatively unknown Bhangarh to…