The Descent to Biskeri Thatch, the next lower camp at 11000 ft., is by far the most arduous but again most exciting too. Over half of the journey is through very slippery snow hardened at places into ice. Two Sherpas accompanied us during this part, one carving out a path in the front and one watching out for stones from the rear. Since the ice is constantly melting the danger of large rocks sliding down is very real – We could see paths gouged out by many rocks which had slid down. 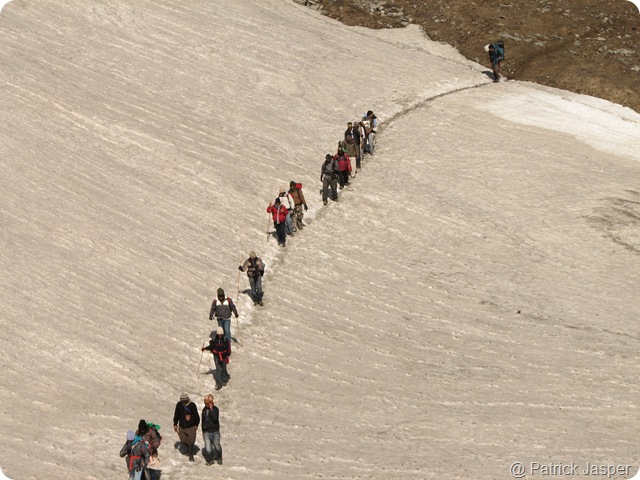 All around was white pristine snow as far as the eye could see. YHAI had already warned us to wear sunglasses during this part as snow blindness is a real threat. There was Ice, Ice and more ice as far as the eye could see until we were tired of the sea of white. It is very difficult task trying to walk on a narrow ledge about a foot wide, trampled smooth by the people ahead. Each step has to be made at a precise angle so that it wedges into the ice and doesn’t slip – there were one or two tricky places when i remembered thinking “this is it!”. 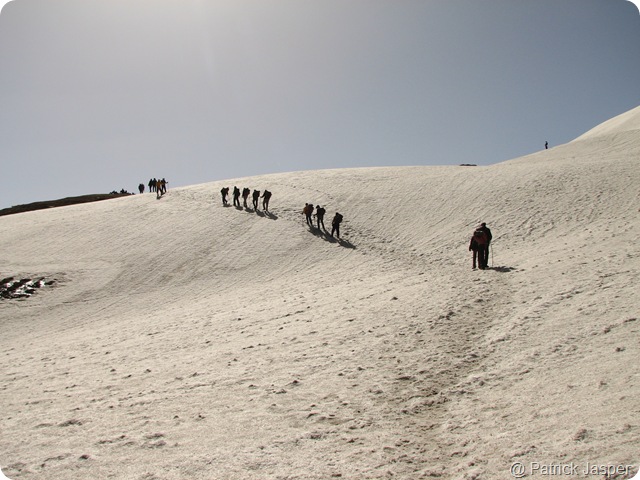 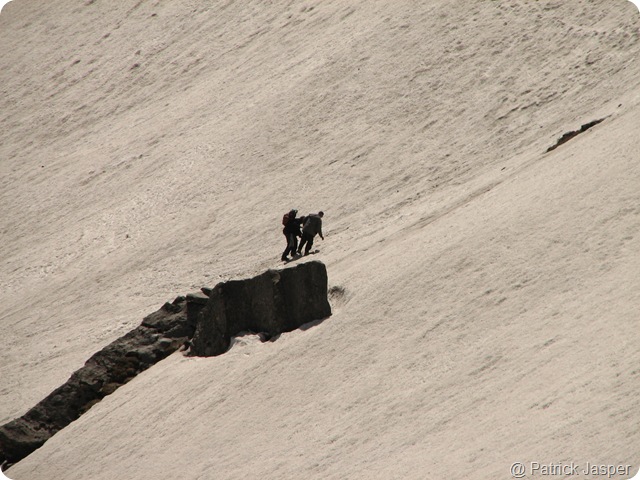 Two of our members slipped on the ice and slid down 50-60 ft and the guide had to rush down and rescue them – It is a herculean task wearing those Rucksacks and trying to make it up those slopes unaided. However we did make it across all fifty of us – even the senior citizens. We later heard that two or three batches had to return back after reaching the summit due to excessive snow and wind from this point. 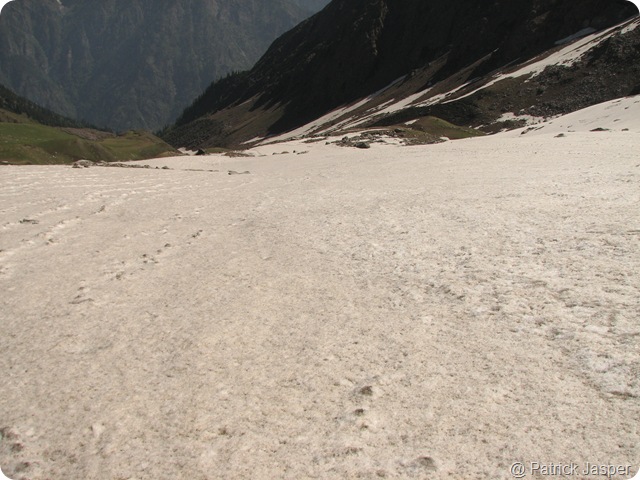 Then came the slides. With this our tiredness just vanished and playful excitement took over. Imagine sliding down a very long slide – all of 750 ft in just under a minute. Awesome and that’s what we did. There are two slides like this which made the descent a lot easier and well worth the effort. A real roller coaster only its straight down. 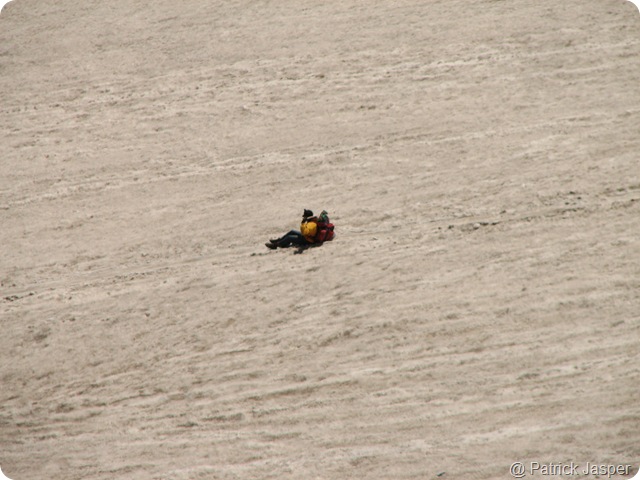 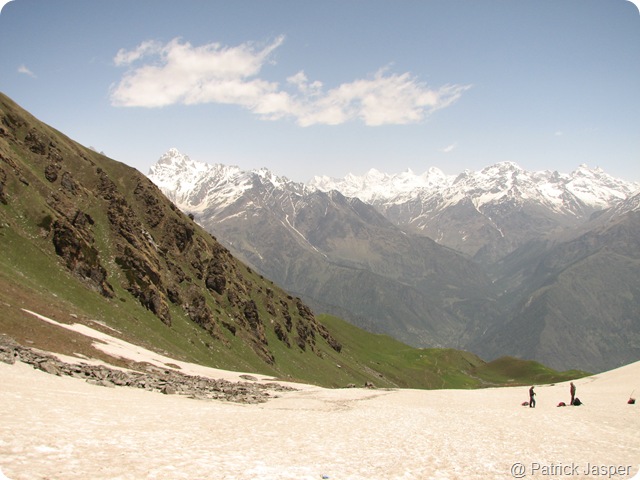 And just like that we were at Biskeri Thatch. This camp is located on a plain parcel of land with a good green lawn. We played a game of Antakshari and cracked jokes now that the pressure was of. We had all become very close since we had left base camp. It is but natural that the same tent mates continue through ought and hence the camaraderie. We were already apprehensive as the end of our lovely trip was fast approaching. 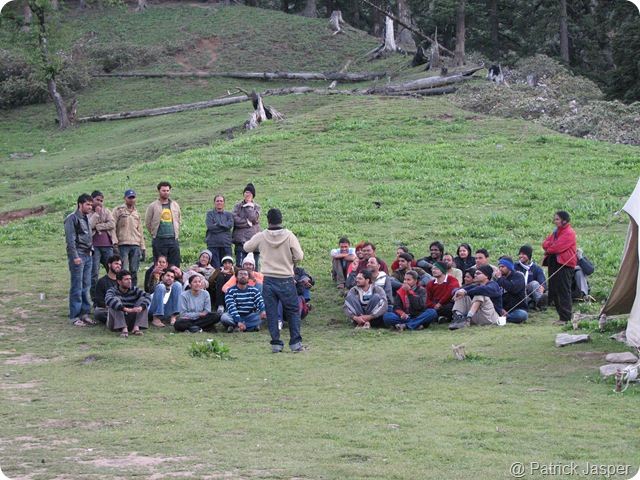 The climb down to Bhandak Thatch at 8000 ft is really pleasant and we did it real slow taking in all that scenery -Tall pine trees, luscious green meadows and a soft wind, not too cold but just right. It was like India’s Switzerland. The camp is also real good. There is just one spot where rappelling needs to be done to cross a feeder to the Parvati – All steams ultimately flow to the Parvati River. This last camp is really beautiful. It seems a lot of people give this camp a miss so as to finish the trek a day early but we felt it was worth the wait. The scenery is awesome and it is very very comfortable after the strenuous trek. We all played a game of throw ball (Muthugu Puncher in Tamil) with rolled up socks. We had our last photo sessions, group photos, sharing of emails, photographs, future plans, autographs etc,. as the next day we would be breaking up and everyone was quite emotional and charged up. 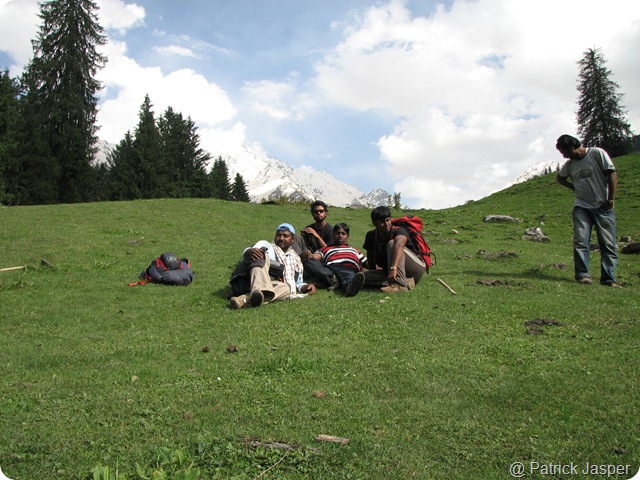 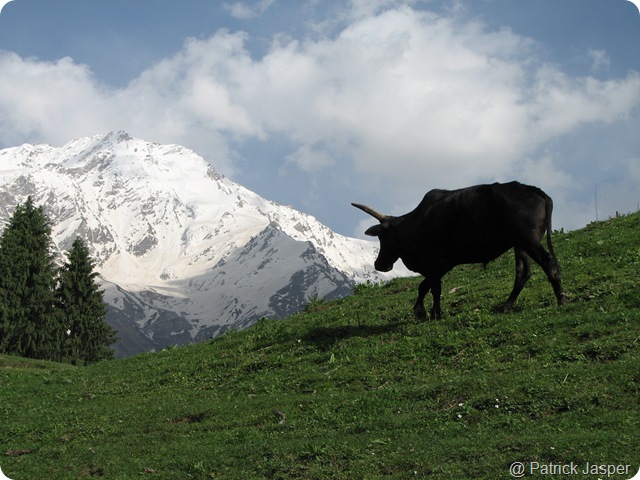 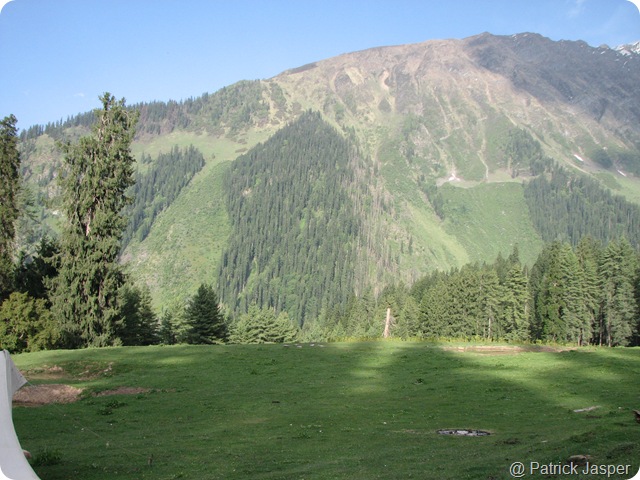 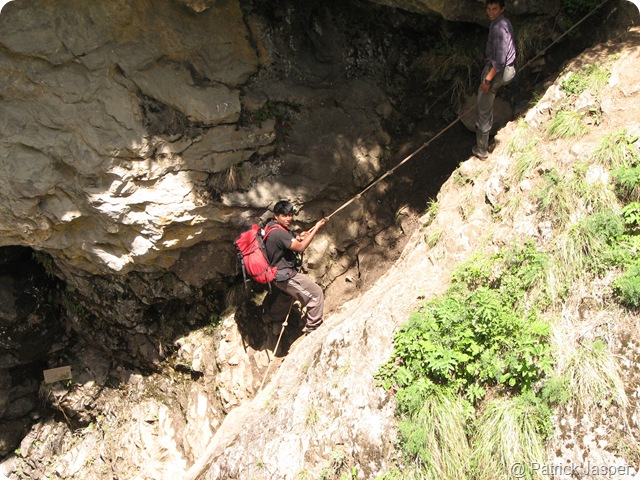 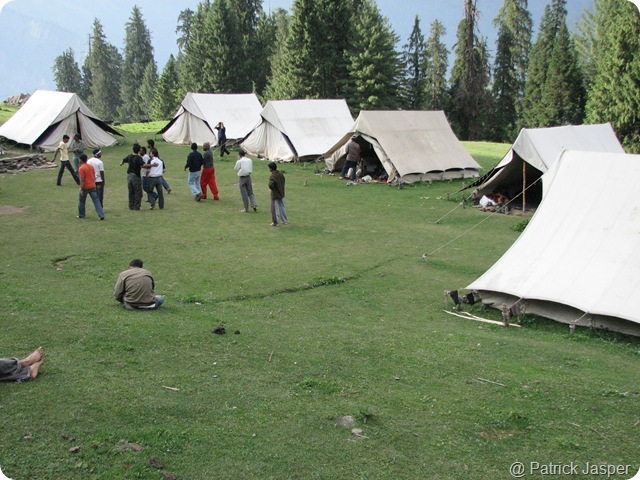 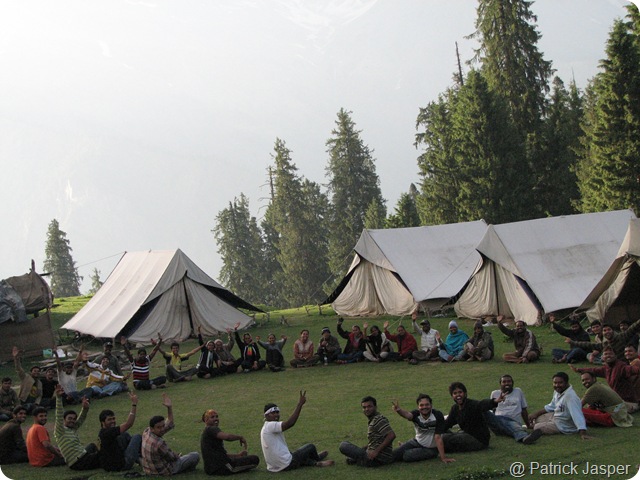 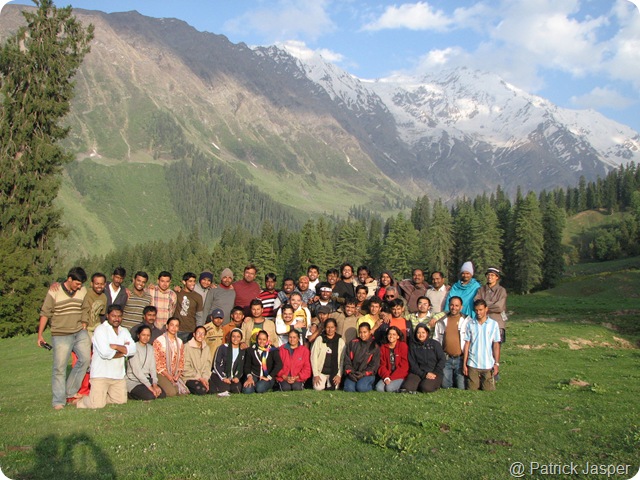 The next day which was the last day of the trek saw us trudging down to the Manikaran Road below. As we descended through a village on the way a Dam under construction across the Parvati River swings into view accompanied by the Dust, Dirt and Noise of construction and we were soon reminded that the pristine environment was coming to an end and civilization is approaching. We went by bus to the Gurudwara at Manikaran where we had a bath in the soothing Hot Springs ( and boy were they hot). The bath was soothing and all our pains seem to melt away. We had Langaar at the Gurdwara. The Food was good and we heard that the food is continuously served to pilgrims almost 18 hours a day. Even Rooms are available free of charge for pilgrims to take rest from their arduous journey. We did take a room and slept a little and assembled to enter base camp victorious and in great joy that we had achieved our objective We were greeted by the Camp staff and other participants and it was a really emotional moment. That night at the Camp fire our certificates were handed over to us. The next morning we all dispersed after breakfast. 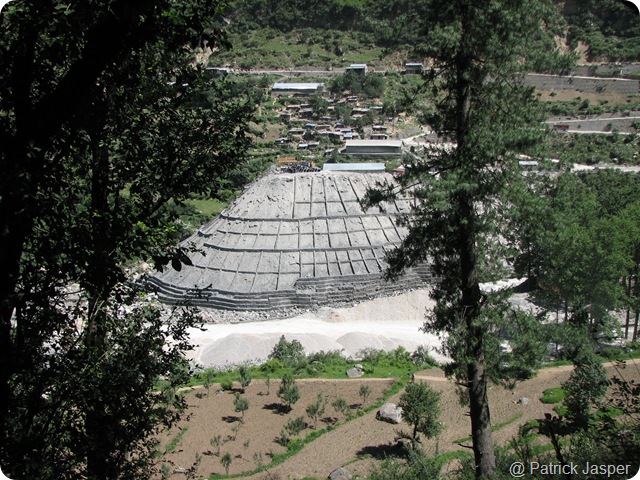 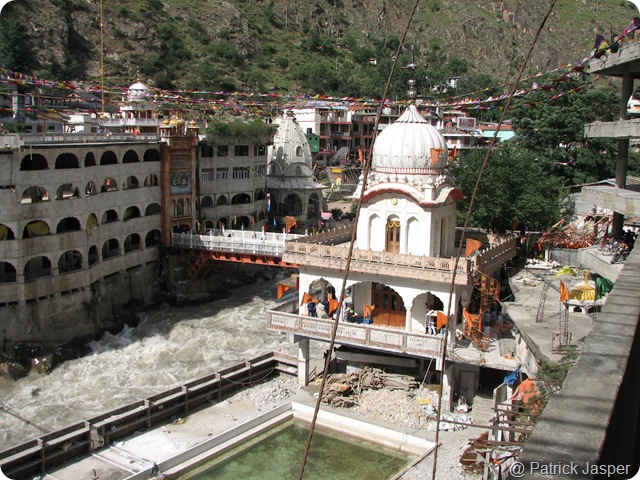 Trekking to the Himalayas was once a dream. With the help of YHAI and the other 49 participants of the trek I made it up and then down. It was unforgettable. Someone once told me that on a YHAI trek one makes friends for life. How true was that sentiment – I will never forget my first trek nor those friends I made on those 11 eventful days and nights during the trek. 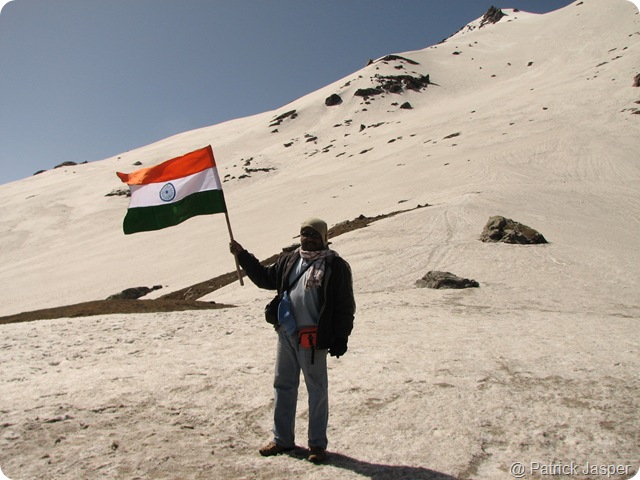