When me and my better half charted out the plan to go to Gujarat, I did a slight homework on internet to find out the places to see and while browsing different sites, I came to know about the concept of Heritage walk which was quite new to me. Normally, the places of interest are better explored any kind of vehicle but the places which lie in the interiors like hidden gems underneath the Earth and one has to walk and walk and walk to explore it. I zeroed in the Heritage walk that starts from the oldest SwamiNarayan Temple in Kalupur area. I was quite interested in it as well as my family members. After exploring the Vav and Aksharadham temple in GandhiNagar, the next day gave us the opportunity to explore this Heritage walk.

I decided not to take my car to the Kalupur area as I had explored this area earlier when I had entered Ahmedabad and found this area to be very congested. Auto Rickshaw was the better option and I duly availed this wisely as our  autorickshaw passed through narrow lanes to reach the SwamiNarayan temple. On the way itself , it became imminent what was in store for us . At the temple premises, on one side of entrance a signboard indicated Heritage walk registration to take place upstairs. There we got a nice welcome from a gentleman who registered us taking Rs. 30 each and gave us badges and brochure depicting the way of heritage walk. He told us to go to the attached room having a slide projector. About 30 chairs were placed there neatly and in front of that was a slide projector. At that time only one person was there , may be a student . When the registration for the day got over, Heritage walkers consisted mainly of 2 NRI families who had come to have a nostalgic feeling and to introduce Gujarati culture to the younger ones in the family, our family and 5-6 students. I specifically mentioned this demographic profile to assert that normal tourist was least interested in exploring this walk despite being Sunday, that the thought there was a huge rush for the Darshan of Swami Narayan Ji.

The walk started (pun intended) with a slide show managed by our volunteer for that day , Mr. Neerav (ever smiling face). I came to know that there was a group of about 10 persons who volunteer this heritage walk turn by turn so that ever losing cultural heritage is preserved. Neerav started with the slideshow showing us the slides about foundation of Ahmedabad city, various lanes and by lanes of old Ahmedabad, difference between the ancient Ahmedabad and the modern city, community feeling and modern marvels of Ahmedabad. We came downstairs after this engrossing 15 minute session and we were instructed to first pay our obescience to the revered deity of the temple. Ambiance was great in the temple premises. It is pertinent to mention here that SwamiNarayan sect started from this temple only. 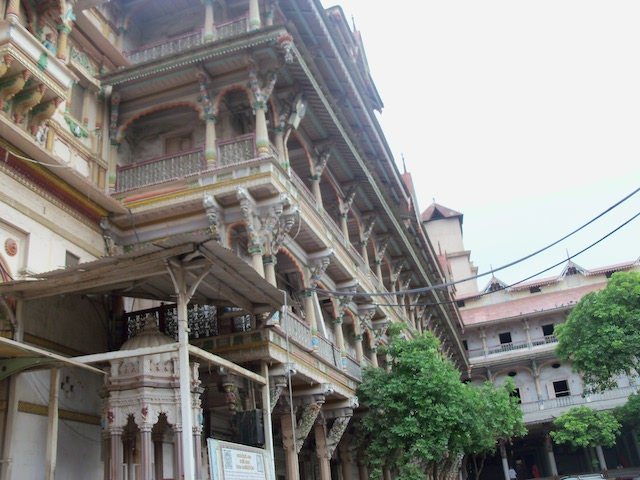 A beautifully carved structure on the way

Mr. Neerav duly told us that our first heritage spot would be the house of the famous Gujarati poet Dalpat Ram. Criss-crossing a few lanes and pols , led by Neerav we reached at a chowk where this house was located with a beautifully carved statue of Dalpat Ram Ji  in the center of this chowk. 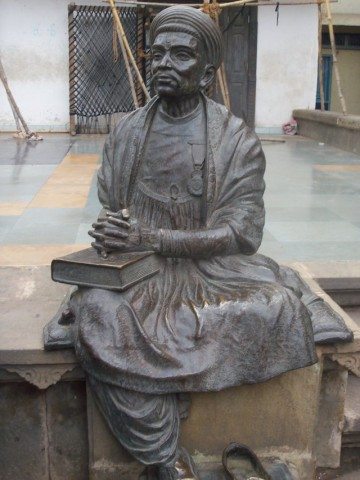 Statue of kavi Dalpat Ram Ji outside his house

Exactly this place was known as Lambeshwar Ni pol (pol , here is taken as the synonym for Mohalla or gate). Dalpat Ram Ji was born in 1820 and his play Laxmi was the first play in Gujarati language. He is considered as a social reformer also and pro British rule for its progressive outlook, not otherwise. (Socio-religious movements were very popular at that time all over India and had become harbinger of political change also.) Mr. Neerav shared a very nice anecdote that often children of the area would come and sit in the lap of Dalpat Ram Ji,s statue.It was a very serene atmosphere at the chowk and the smiling face of Neerav Ji along with his passion for Gujarati culture had made the ambience more soothing. 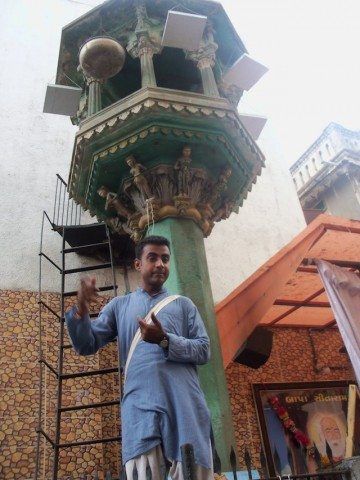 Volunteer for the day – Mr. Neerav

Next Heritage spot was to be KalaRam mandir located at Haja Patel Ni pol (locality of Patel community). 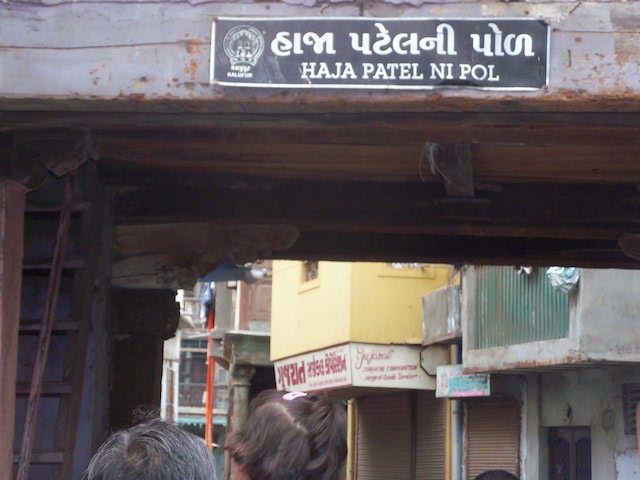 The temple is named so as it has got the idol of God Sh. Ram in black colour and we were told that in the world only two temples have got the black statue of Ram Ji and Kala Ram is one of the, Another unique point of the statue is the sitting posture of the revered god. While on our way to Kala Ram temple, Neerav Ji stopped for a while in a street and indicated us to look at some small structures upwards which incidentally were nests for the birds, The old houses and some specific poles also had the spots to feed the pigeons and this despite all the modern way of living remained intact. (Shows the symbolic gesture as well as love of Gujaratis towards the lesser living beings). It is said that the statue of god Ram surfaced by itself after it remained protected and hidden to protect it from he fury during Mughal period. It resurfaced post-independence period. Outer structure of this temple is an architectural marvel in itself with the wooden ceilings having ornate carvings.

Neerav ji was leading us to what turned out to be a very happy journey on foot. Suddenly he stopped at a small Chouraha where an iron pole was located and topmost was placed an arrow like structure like we have which tells the direction of wind. He quizzed us with his trademark smile that what we thought of that structure. Naturally all of us thought this to be an ancient pole serving the purpose of telling the direction of wind and any other kind of weather forecast but we all were wrong as the structure turned ot to be the first underground sewerage system beneath it which was about a century old. He told us that new Ahmedabad might face the problem of water logging but this problem was nowhere to be found in that particular area of pols and the Gujarati faily who was part of this heritage walk vouch for it. 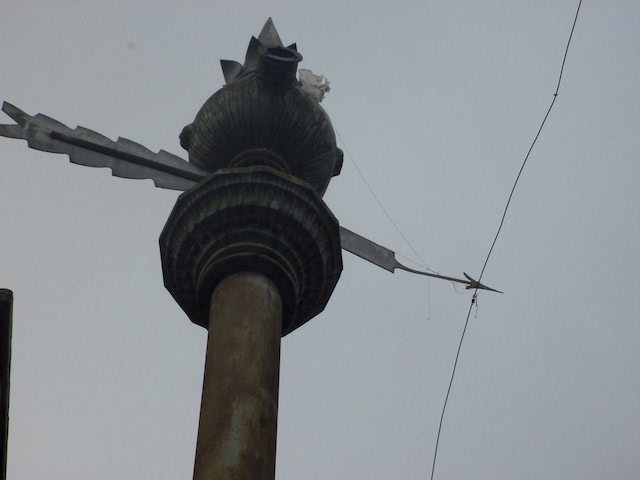 The structure where lies a century od sewerage system

Even today when some of the cities of India does not have the sewerage system, the enterprise nd planning of the city compelled us to say, Hail the enterprising spirit of Gujaratis. Some more on heritage walk  in the next post…

Some days in Gujarat – Heritage walk (a new experience) was last modified: October 5th, 2021 by Rakesh

The grandeur was so vast and limitless that it never appeared Earthly. As if it was a symbolic display of cosmic truth. The mist seem to be representing the world that we live in. We are the tiny drops that constitute that mist, so very attached and absorbed in that haze. But up there a blessed energy awaits us. Only if we have the courage and awareness to unbound from this ocean of mist and set our selves free.