A group of four friends who were initially planning to go to Bhangarh and later changed their plan to go to sariska finally ended up going to Fatehpur Sikri .I wonder how great is our planning department because what we plan initially would never ever been converted into reality.Finally we all four of us embarked our journey to Fatehpur Sikri in Maruti Ritz(“Live the moment”).

A city that was once the proud capital of the Mughal Empire in the 16th century, Fatehpur Sikri now stands deserted as a well preserved ghost town. It was abandoned by its occupants after only 15 years due to insufficient water supply.

Fatehpur Sikri was established by Emperor Akbar from the twin villages of Fatehpur and Sikri as tribute to famous Sufi saint, Sheikh Salim Chishti. The saint accurately predicted the birth of Emperor Akbar’s much longed for son.

Fatehpur Sikri is located 40 kilometers (25 miles) from Agra, in Uttar Pradesh. So we took National Highway-2 to Agra and later slip road before Agra to reach Fateehpur Sikri. Had a quick break at gulshan dhaba near Kosi Kalan, The Dhaba was good except the food was 2 days old.The weather was awesome as it was month of October chilly breeze was blowing in the morning.

Moving on we finally reached our destination Fatehpur Sikri, A guide is necessary as he will help you in clicking pictures.Our guide was like a professional photographer.He took great Pictures synchronizing both the architecture of the location and us, He also told us the bright history of mughal empire and how Fatehpur Sikri was of a paramount importance at that point of time. However if you are coming by car you have to park your car half a kilometer before the fort complex. 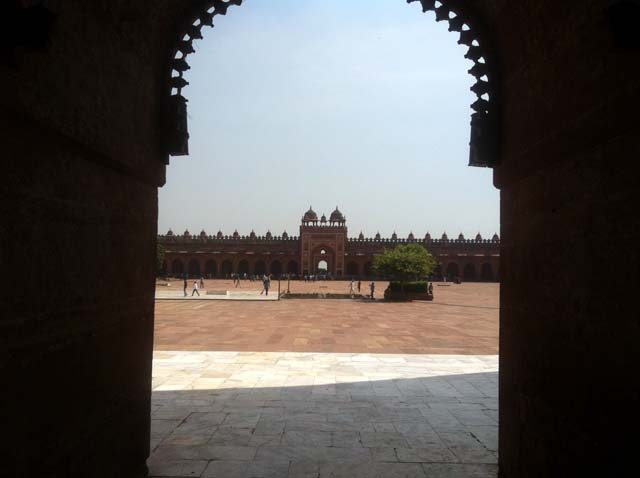 Ramparts of the great fort

There are 4 things to see in Fatehpur Sikri fort complex  Buland Darwaza, Fatehpur Sikri Fort, Tomb of Salim Chishti, and the Panch Mahal.All these places are architectural marvels of that time.The paintings on the main fort structure are exceptional.Many movies like Pardes, mere brother ki dulhan etc were shot here.

The Dargah of salim chisti was the best thing after Buland Darwaza which is the highest in the world The magnificent size of the buland darwaza was eye catching ..there are about 100-150 stairs then the gigantic structure called Buland Darwaza. Akbar later built the fort here and Jahangir did the marble art on Salim Chisti Dargah .In salim chisti dargah one can pray and can tie a knot to make a wish.As Akbar also wished for a child here and his wish got fulfilled.Even today people make wishes here. 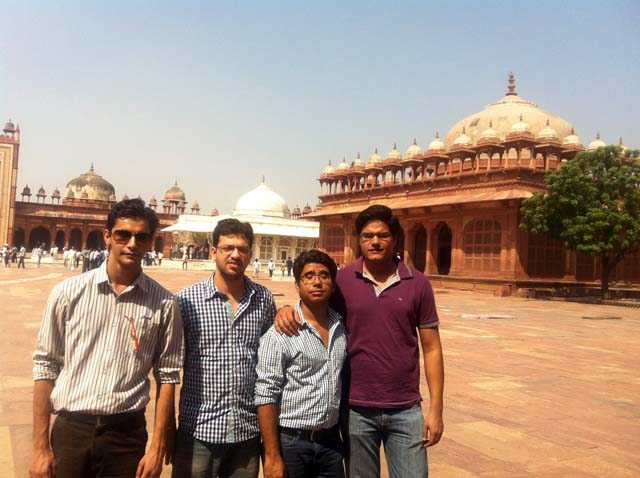 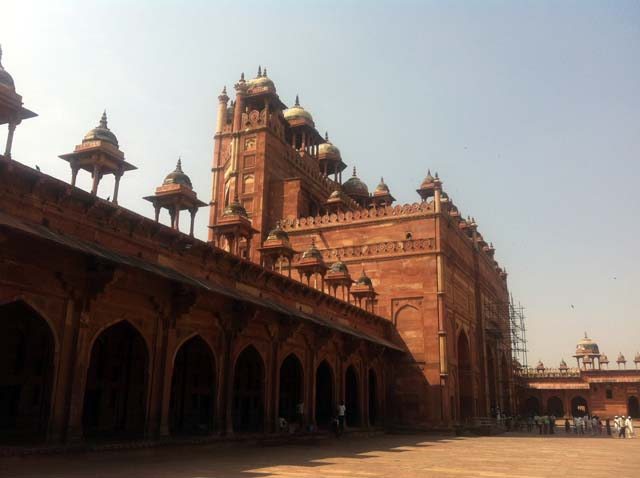 Would like to mention entire structure is “hollow”.There is an artificial air conditioning system inside the fort that was built in mughal era.Also there is an artificial tunnel which connect Fatehpur sikri to Agra as well as to Delhi.The tunnel was used in war times,unfortunately it is close now as part of the tunnel had collapsed.

our guide told us about the past  of this place that The battle of Khanua (16 March 1527) was the second of Babur’s three great victories in northern India that helped to establish the Mogul Empire. Having defeated the force of Ibrahim Lodi, Sultan of Delhi, at Panipat, Babur was faced with two main groups of opponents – the Afghan supporters of the Lodi sultans, many of whom refused to accept his authority, and the Rajputs, led by Rana Sanga of Mewar .The city was named Fatehpur Sikri after the victory of the empror Babur over Rana Sanga over the city.

There is a battle ground behind the fort structure.Also there is a place in this area where a famous elephant was used to punish the criminals at that time.

Finally we embarked back to Delhi by Taj Expressway it’s an international standard Expressway with international toll rates and it’s boring ride for Indians as there is no traffic jams and no one to overtake. However there are 3 toll plazas which only have minimal facilities. Remember that as of now there is no petrol pumps on the highway.The highway is made up of cement so drivers are cautioned that they not over speed as it could lead to tire bursts.

In the end I would say that if you have a single day, don’t waste it in malls go check out Fatehpur Sikri with your friends/family as it is much better than Agra and far less chaotic,Remember if you start 6 in the morning then you would be back by 5 pm.And take back the glorious history of the great Mughal Empire.This place is a truly a place of “Fateh”(victory)

A Day trip to Fatehpur Sikri from Delhi was last modified: February 12th, 2021 by Nitish Banka

It was last weekend of July 2007, rainy season in Maharashtra and we, a group of 11 people (extended family) went to three days…