Continued from the last post…. in which we visited Buddhist and Jainism Excavation. In this post we will visit Brahmanical series (Ellora Caves No. 13 to 29).

Brahmanical Excavations
The Brahmanical series, excavated between the seventh and ninth centuries are glimpses of a world apart from the chaitya hall and Viharas. The familiars Buddha’s and Bodhisattvas are gone. The Brahmanical religion in India was based at the outset on the concept of one Supreme Being but in later ages it was reflected through dramatic expression in symbolic figures. The imagination and the poetry of the new concept were reflected in art which attained a new visual grace and power.

It is good to remember that the Brahmanical revival which produced this group of Ellora caves under royal patronage had nothing in it of intolerance against the Buddhist system fought entirely in the intellectual arena.

Cave 14 serves as an introduction to the new order. In the first panel to the left there is Durga the mother goddess, whose worship forms a great festival in India.

Cave 15 is reached after a long climb over steps which lead to carved gate. Double storied, it has a courtyard with several small shrines and chambers for the temple priests. The first floor holds the presiding deity of the temple the lingam and facing it in the center stage is the Bull (Nandi), who is Shiva’s mount and an inevitable feature in all Shiva shrines. 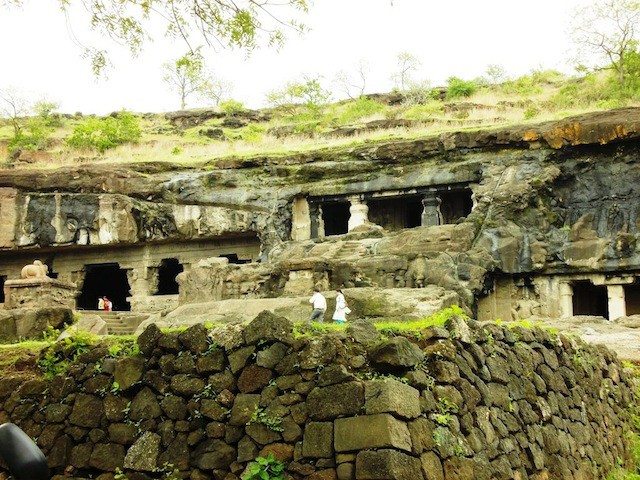 Cave 16 celebrated as the Kailasha. Shiva’s mountain abode is by far best of all Ellora excavations and it is one of the India’s most famous monuments. Here is rock cut architecture at the apex of technical skill of eights and early centuries. Regarded as the greatest monolithic structure in the world, Kailash combine immensity with grace, energy and super genius. Its conception and planning are matched be the jewel like execution. Hundreds of architects and sculptures created this grandeur out of living rock in an inspired period of the country’s art history. 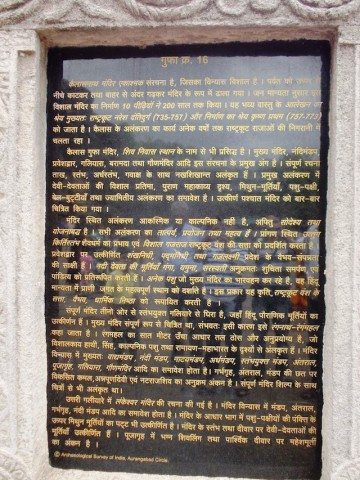 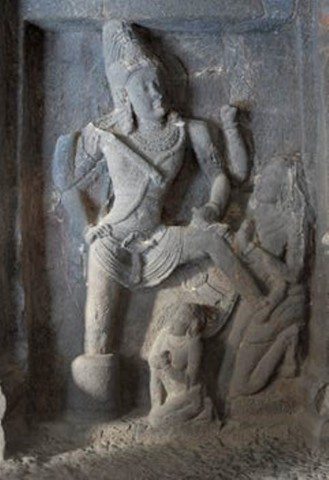 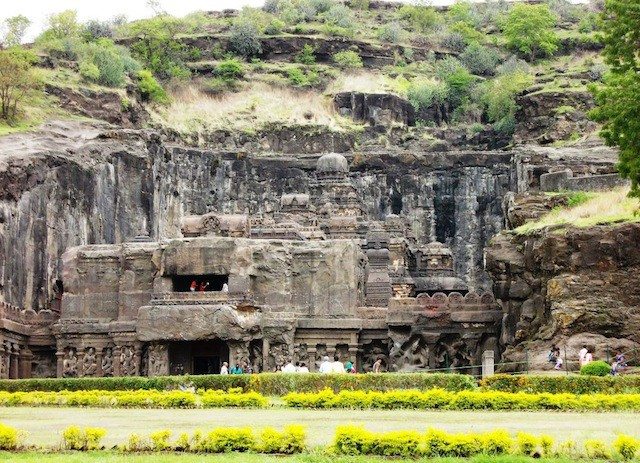 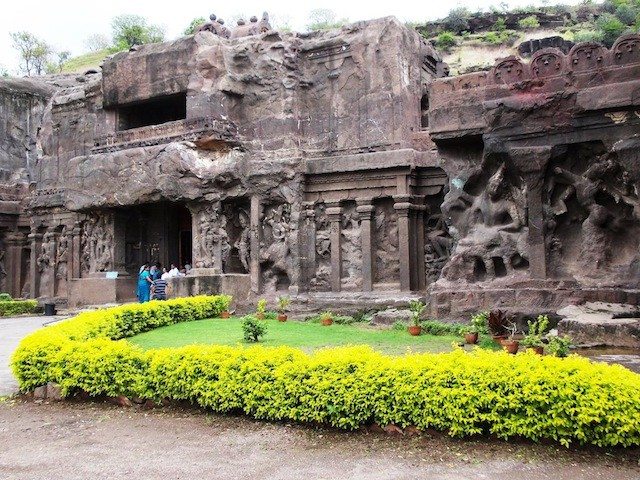 The main temple has two storeyed, 150 feet by 100 feet at its base with several ancillary features added later. It has 25 feet high plinth, the sides of which are done into bold friezes of the life size elephants. The huge beast seems a strain with the great burden of the temple on their back. The roof is pyramidal having a three tier tower and a projecting gable front. There is a cupola on the top.

The northern court is featured by a huge elephant which has lost its trunk and also a victory pillar. Close to the southern gallery is a sculpture masterpiece known as “Ravana shaking Kailasha” Ravana a central figure in in the great epic Ramayana, stepped under Kailasha and tried to lift the mountain abode on his head as an exhibition of his great strength. By way of an answer, Shiva simply put his foot down on the floor and under the enormous pressure exerted, Ravana became the helplessly trapped. The depiction shows Parvati clinging to her husband, an alarmed maid in flight, and attendants seated unperturbed with full faith in the Lord of Kailasha.

Several other halls contain work of considerable value contributing to the total effect. The main hall on the first floor has well decorated balconies. A central door leads to the shrine containing the great lingam.

The lingam is faced by a pavilion, 50feet high and level with main structure to which it is connected. This pavilion is the adobe of Nandi. O each side of the Nandi shrine is a pillar, a stone and a ‘flagstaff’ about 51 feet high with finely wrought carvings of the Shiva cult. These two pillars are among the best work of art in Kailsha. 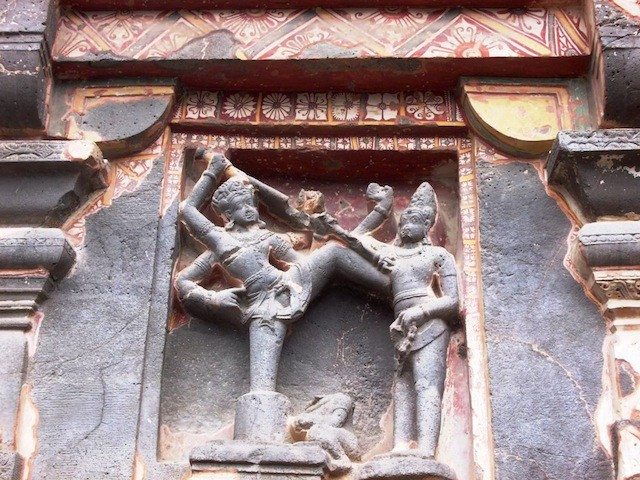 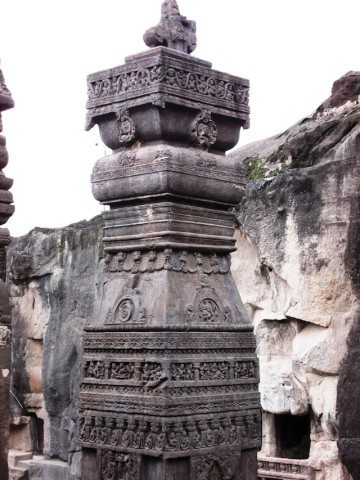 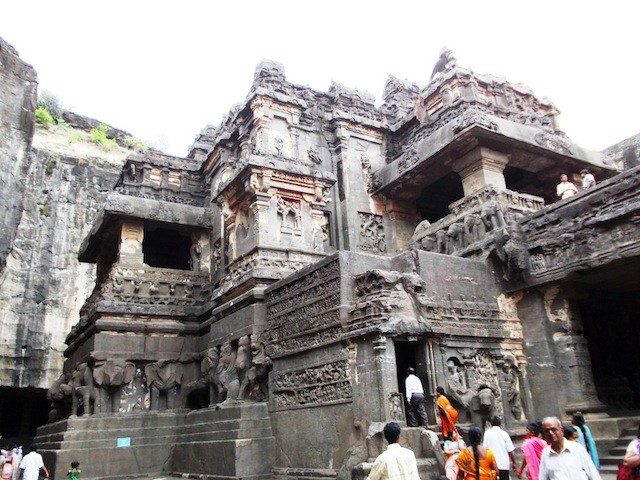 Cave 17 the pillars of the cave are huge and in the interior Garbh Greh, there is a Shiv Ling and images of Brahma, Vishnu, and Ganesh. 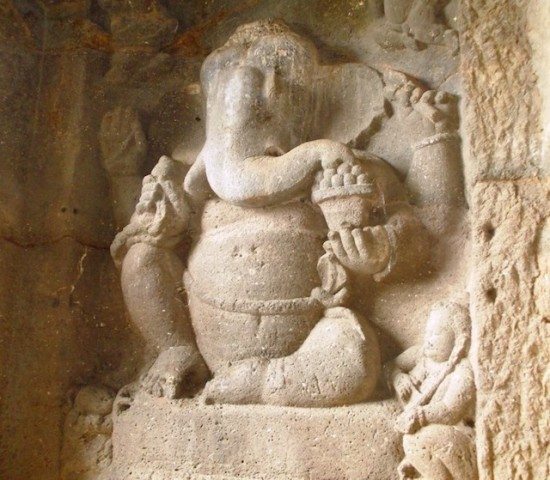 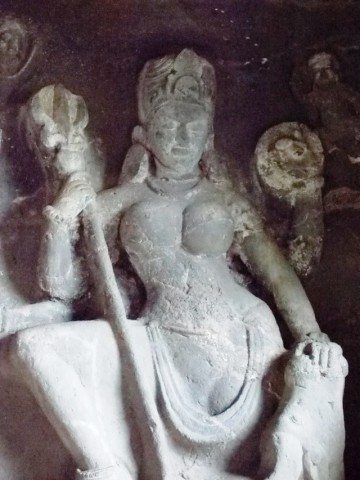 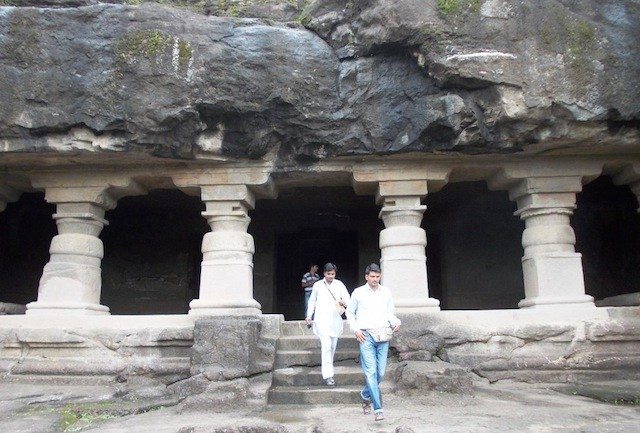 Satish, Sonu and Naresh coming out of Cave 18

Cave 20  – after ascending some steps there are huge images of gate keepers and Gate keeperesses and in the interior Garbh Greh, there is a Shiv Ling. The images of Lord Ganesh and Mahisha Surmardni are worth seeing. 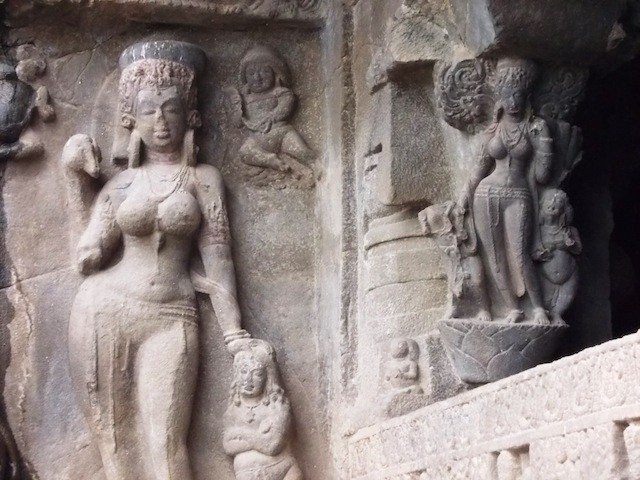 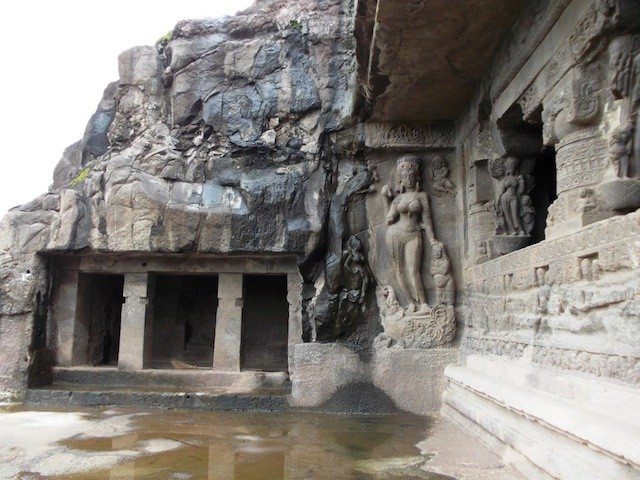 Cave 21 has an attractive façade. In front of it is Nandi on the usual raised platform, close by are the figures of the river goddesses, Ganga and Yamuna. The fine brackets of the pillars have female figure with foliage above them and lotuses underfoot. Inside the chamber, Parvati marriage to Shiva is set in a panel filling almost an entire wall .There is a second chamber with several panels. 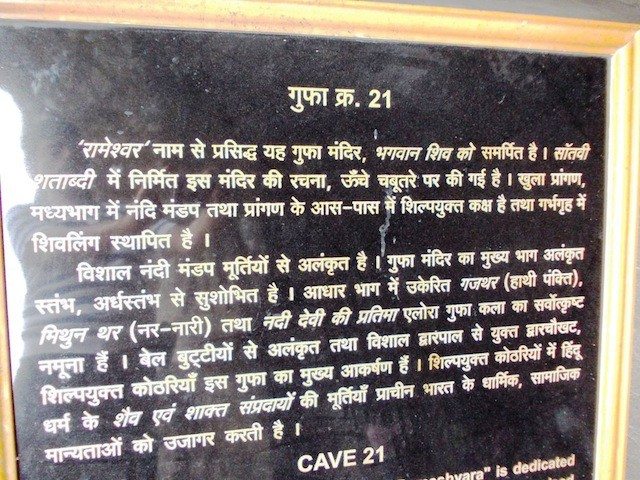 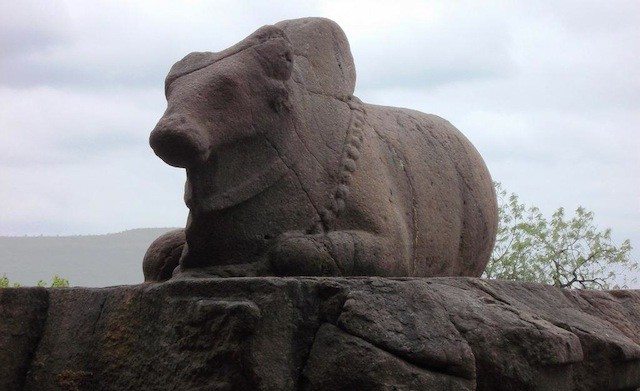 Nandi on the raised platform 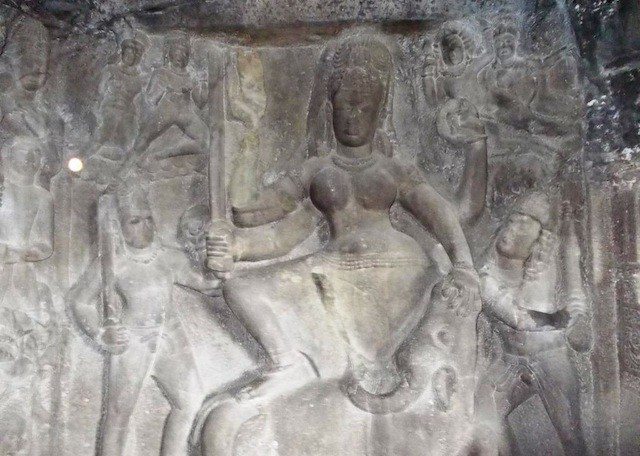 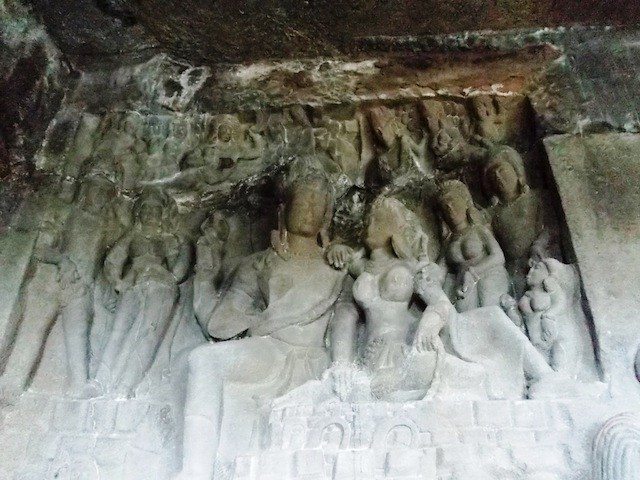 Siva and Parvati sitting on Kailash 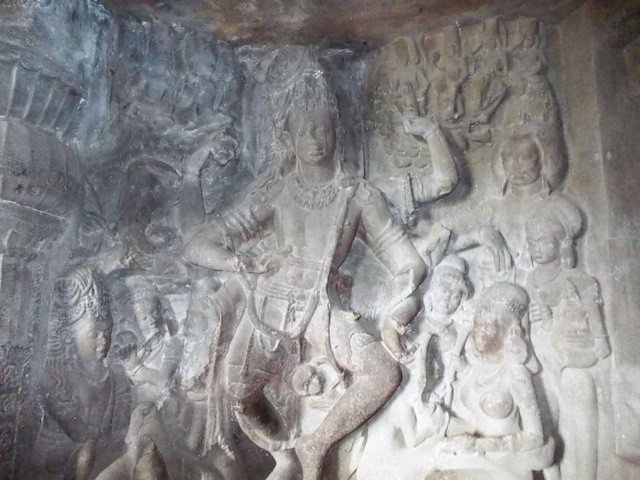 The dancing Shiva with eight arms

Cave 22 the local name is Neel Kanth and is a river. Cave 23 and 24 have only Garbh Grehs. Cave 25 this is huge cave and interior contains astounding image of Sun God in a Rath which contains seven horses. 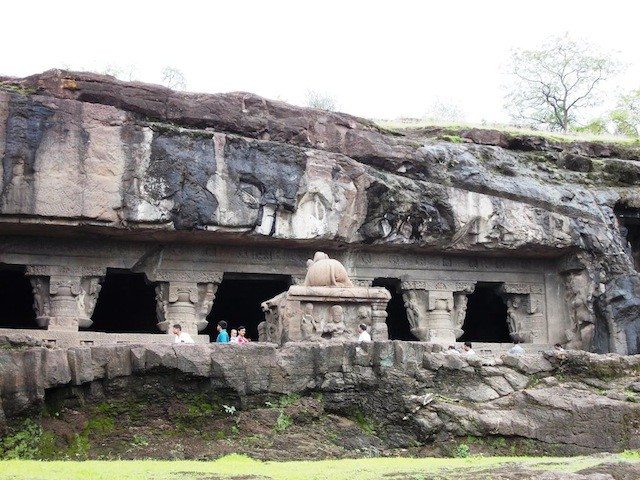 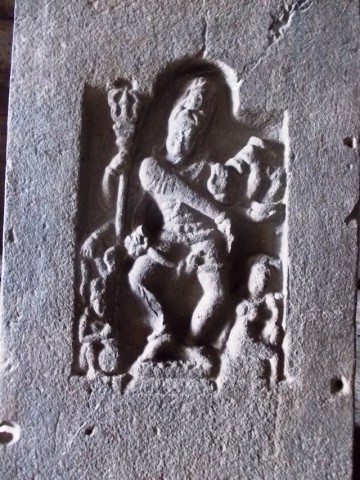 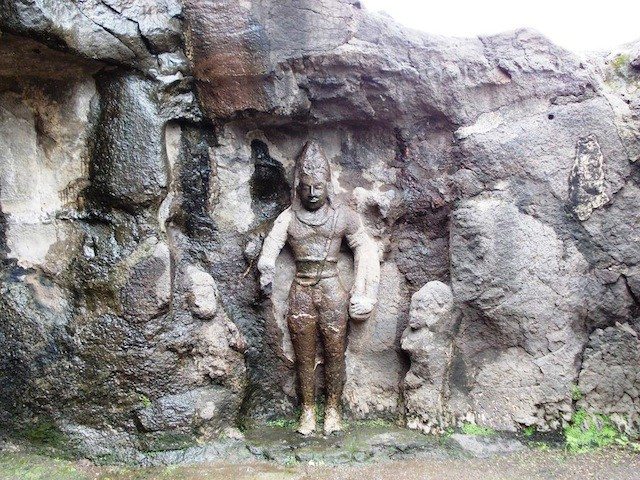 Cave 28 there is an empty small room in the cave and the water fall runs only for six seven months.

Cave 29 This cave is compared with the ones at Elephanta and Jogeswari Caves but this one is larger, finer and of a later age. This is the best preserved and largest of all three, which were executed on the same plan, light being introduced from three sides, which is extremely difficult in cave architecture. The hall, including the shrine is 148 feet by 149 and nearly 18 feet in height. However, the entire excavation extends to almost 250 feet. Two large lions with small elephants under their paws guard the steps which lead to the hall from three sides. In the front, is a large circle for the Nandi. The hall is in the form of a cross, the roof supported by 26 massive pillars. 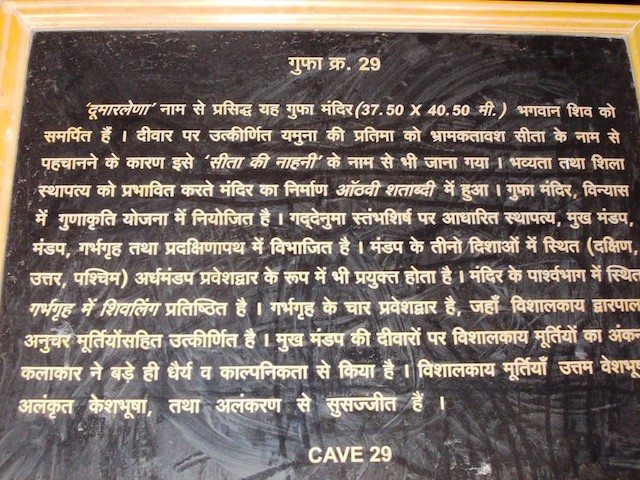 Everything here is colossal. The verandah near the entrance is dominated by huge Shiva with eight arms. It is a powerful depiction of the God conceived as the terrible. Another colossal Shiva in the portico dances in destructive fury. A beautiful Yamuna river goddess waits outside.

There are large sculptures in the front aisles on three sides. In the west aisle, on the south end we find Ravana lifting the Kailas Mountain, as we have seen is repeated at many places in Ellora. In the north end, we find Bhairava with two victims. In the south verandah there is a large pit opposite the landing. In the west end Siva and Parvati are playing the dice game, Vishnu and Brahma standing on either side. 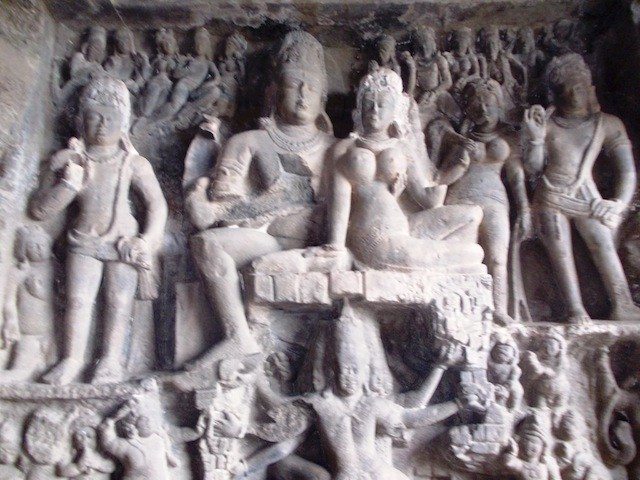 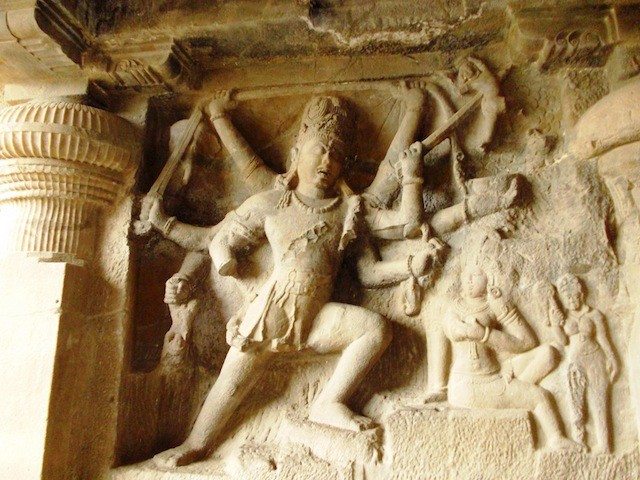 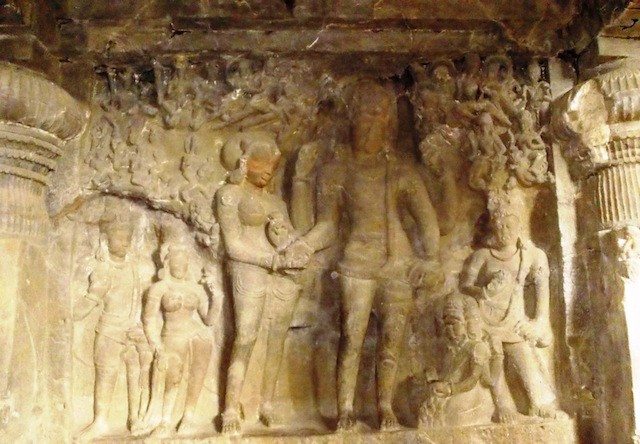 The marriage scene of Siva and Parvati 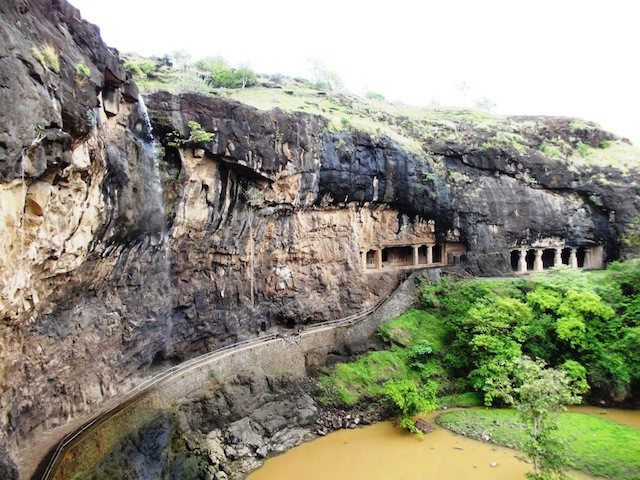 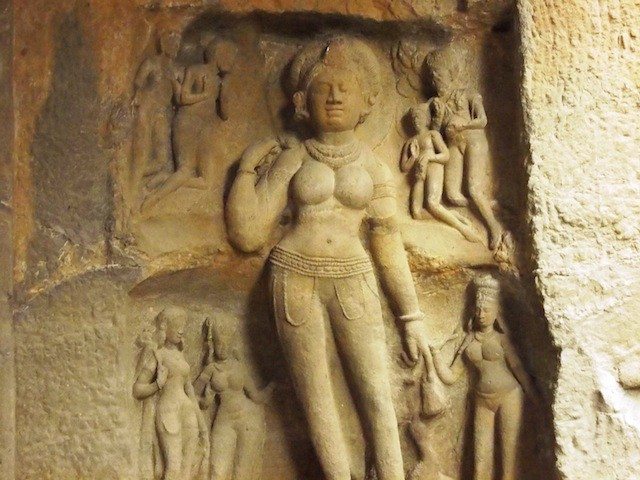 In the east end is the marriage scene of Siva and Parvati. Both are holding a flower in the left hand; below, to the right, kneeling by the sacrificial fire, is Brahma, with three heads, acting as priest; to the left are Mena and Himalaya, the parents of the bride with a flower and coconut. Above are the gods and goddesses. To the south of this is a gigantic Devi with round head-dress peaked in front. To the south of this are stairs descending to the stream below.” 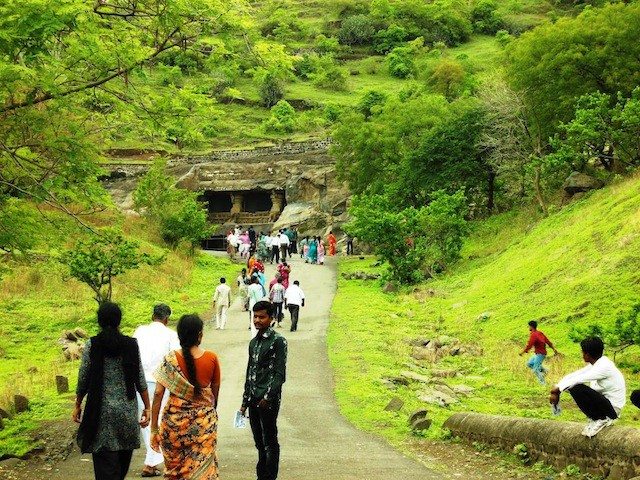 A tourist can plan the visit of these caves according to the time available and depending upon the interest in ancient art. If a visitor has at his disposal three to four hours, then the Cave nos. 10 (Visvakarma Cave), 16 (Kailasa), 21 (Ramesvara) and 32 & 34 (Jaina group of caves) should not be missed. Thus, by visiting these caves, one can have a glimpse of the representative art of Buddhism, Brahmanism and Jainism. If a visitor has an entire day at his disposal, the Cave nos. 2, 5, 10 & 12 of the Buddhist group; Cave nos. 14, 15, 16, 21 & 29 of the Brahmanical group and Caves 32 to 34 of the Jain group should be visited.

The caves are excavated in the scarp of a large plateau, running in a north-south direction for nearly 2 km, the scarp being in the form of a semi-circle, the Buddhist group at the right arc on the south, while the Jain group at the left arc on the north and the Brahmanical group at the center.

(The information about Ellora caves has been taken from the Ajanta Ellora guide book which I purchased from Ellora. For me, Guide books are always better than local guides because mostly they have relevant information, stay with you forever and are economical too. )

After watching Ellora caves we took shared taxi (Shared Taxies run in plenty between Aurangabad and Grishneshwar) and proceed towards Daulatabad to see famous Daulatabad fort.

So, the next post on Daulatabad fort……….. Stay in touch.