In the last post we visited Daulatabad Fort. After that we took one shared taxi for Aurangabad. Today was our last day of this mega tour. At midnight we have to catch a train from Manmad for Ambala. To reach Manmad, there was an express train from Aurangabad at 20:30, so we have enough time to roam in Aurangabad to visit its famous places like Bibi ka Maqbara and Panchakki. At Aurangabad bus stand all other passengers of shared taxi get down. We ask the driver to take us to Panchakki and Bibi ka Maqbara. He agreed on for some extra bucks (Rs.150) and one condition that after Panchakki he will drop us at Bibi ka Maqbara. He was not ready to wait for one hour at Bibi ka Maqbara; which is at least required to visit the monument. We have to look for another option to reach railway station. 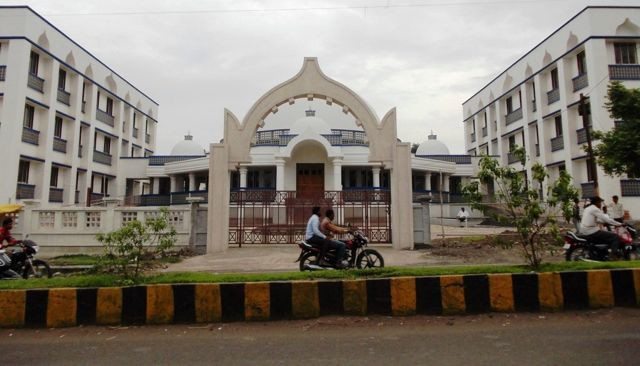 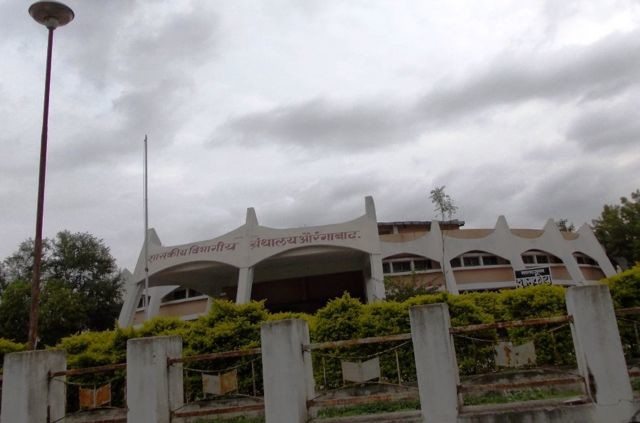 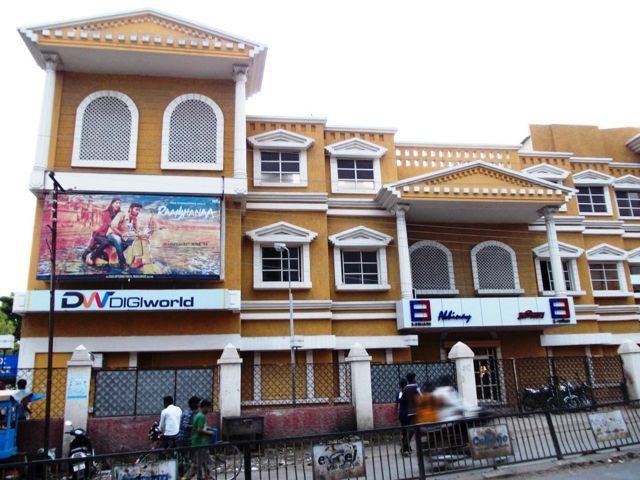 First he took us to Panchakki .There was entry ticket of Rs.5 per person. We spend around 20 minutes there and after that driver took us to Bibi ka Maqbara.
Here entry ticket was of Rs.10. This place is maintained by ASI. Let’s have some brief introduction of these places.

Panchakki
Panchakki (water mill) takes its name from the mill which used to grind grain for the pilgrims. This monument located in Aurangabad, displays the scientific thought process put in medieval Indian architecture. The complex of Panchakki had been a place of external abode of the great Sufi Saints who gathered to India in 12th Cent A.D. The Panchakki, is a calm and peaceful place that visualizes the life that existed in the medieval period. Visitors having sensitive imagination may hear the beats of drum and the humming noise of the people moving around the complex. 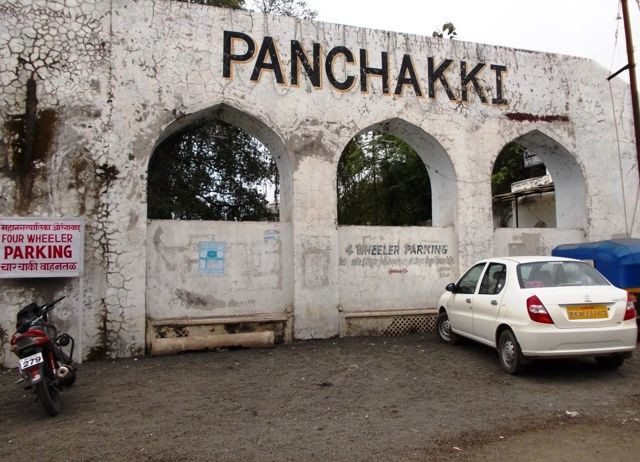 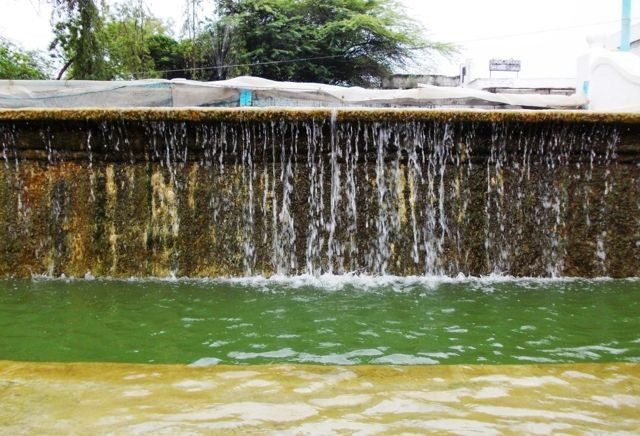 The water flows down through clay pipes based on the Siphon System from the distance of 11 km. This marvelous water mill wax designated to generate energy to turn the large grinding stone, serving as a flour mill.

A craft shop in Panchakki 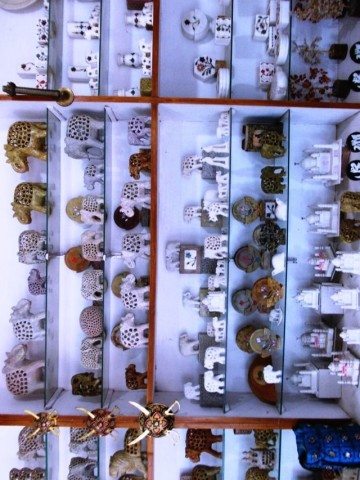 A craft shop in Panchakki

The Panchakki with all its glories and enchantments has a unique place in the history. In fact it was the residence of popular saint “Baba Shah Musafir “. The Panchakki has its own underground water channel, having the source somewhere towards the North of the city about 8 Kms. away in the mountains. The construction of this water channel from the main source to the Panchakki was started during the life time of saint “Baba Shah Musafir ” sometime in the year 1624 A.D. 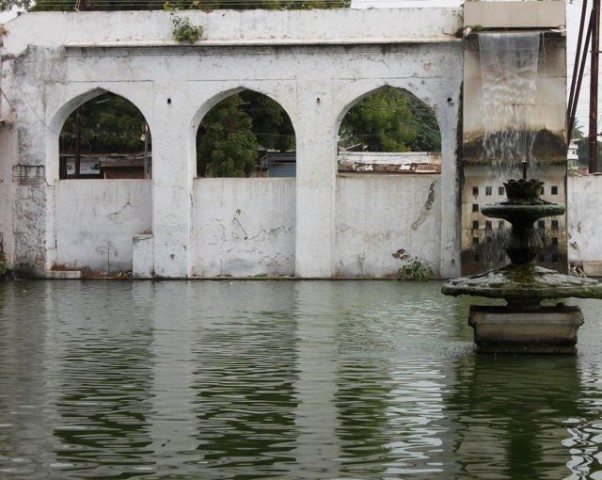 The water fall and fountain in Panchakki

The complete water channel is made up of earthen pipes finely lined up and at appropriate distances, masonry pillars are erected which serve as natural suction pumps to make the water flow through the pipes with force through the distance of 8 Kms. Finely, the water rises ” sonically ” to a huge elevated masonry pillar from where it falls down into the main tank to make an attractive “Water Fall”. 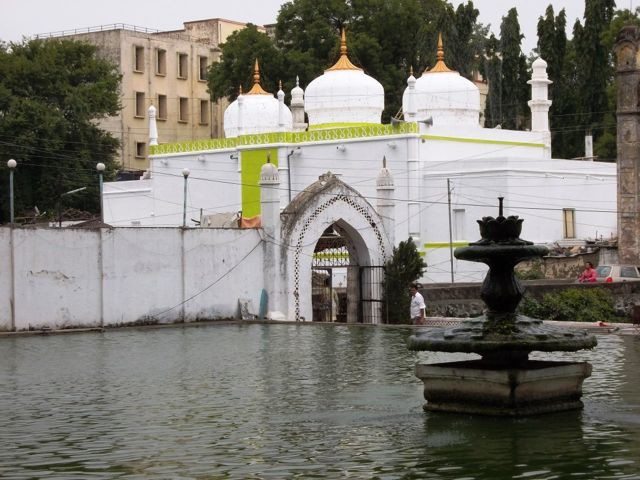 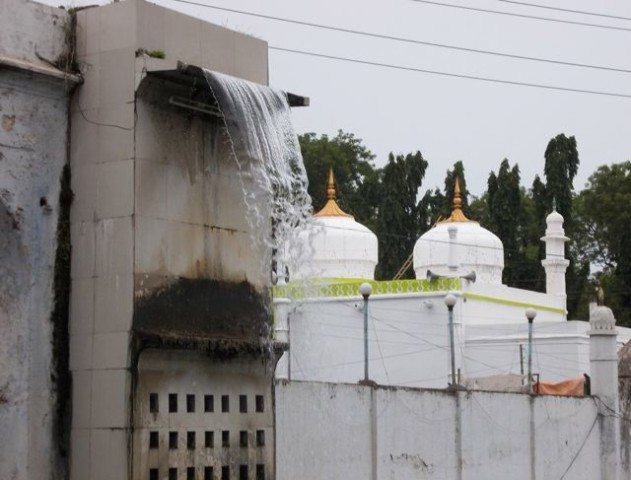 How to reach Panchakki by Road
You can hire a private car, an auto rickshaw or you can use the public transportation like city buses to reach there. The drive is an approximate 4-5 kms from Central Bus Stand and 8-10 kms from Railway Station.

Bibi ka Maqbara
Bibi Ka Maqbara is situated about 5 kms from the Aurangabad city, the burial place of Aurangzeb wife, Rabia-Durrani. It is an imitation of the Taj Mahal at Agra; it is also called as “poor man’s Taj Mahal” owing to it being a poor replica of the Taj. Behind the tomb is located a small archeological museum. 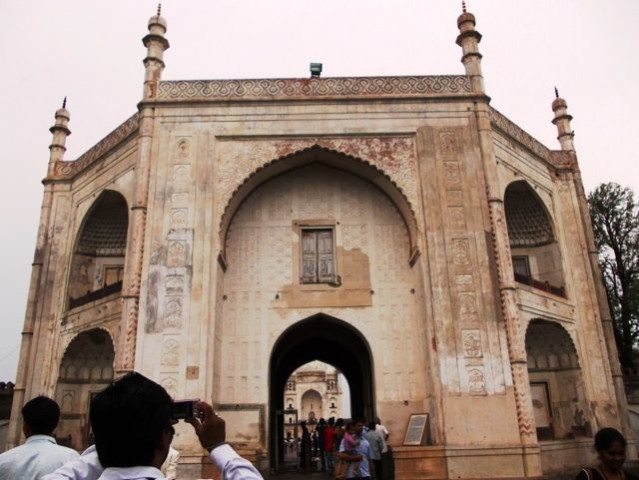 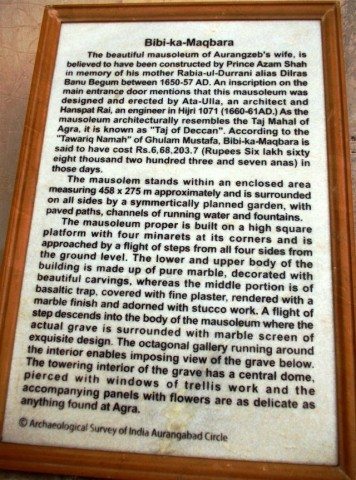 The comparison with the Agra monument has unfortunately somewhat degraded the Aurangabad tomb which in itself displays a worthwhile architectural design, with much distinguished surface ornamentation in the late Mughal style.

The tomb dates from 1678 and it was erected by Prince Azam Shah, one of Aurangzeb’s sons, in memory of Begum Rabia Durani, his mother. It stands in the middle of a spacious and formally planned garden, some 457 by 274 meters, with axial ponds, fountains, and water channels, many defined by stone screens and lined with broad pathways. The garden is enclosed by high crenellated walls with fortress set at intervals, and open pavilions on three sides.

In the middle of the south wall is an imposing gateway with brass-inlaid doors; these are inscribed with the name of the architect, Atam Aula. The central focus of this vast enclosure is the tomb itself. This is raised on a high terrace to look out over the garden plots and waterways. Access to the octagonal chamber containing the unadorned grave at the lower level is from a flight of steps that descends from the terrace. The grave is enclosed by an octagon of perforated marble screens. The chamber above is a high square structure presenting identical facades on four sides. Each is dominated by a lofty portal with a pointed arch, flanked by smaller arched niches of similar design. A great dome, with a pronounced bulbous profile and a brass pot finial, crowns the whole composition while four lesser domes mark the corners. 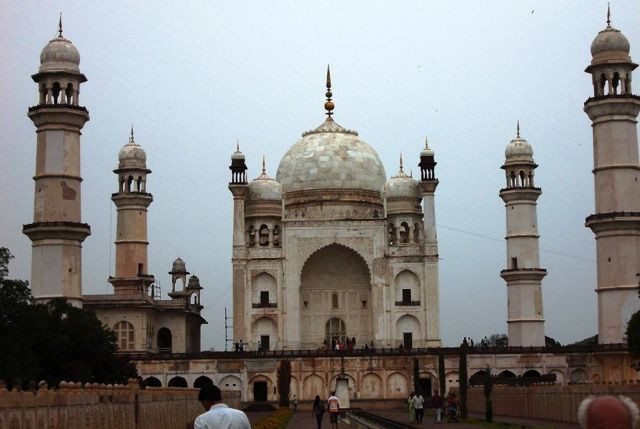 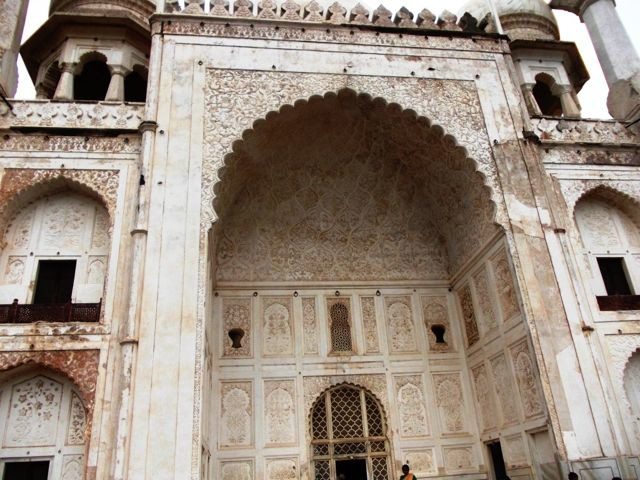 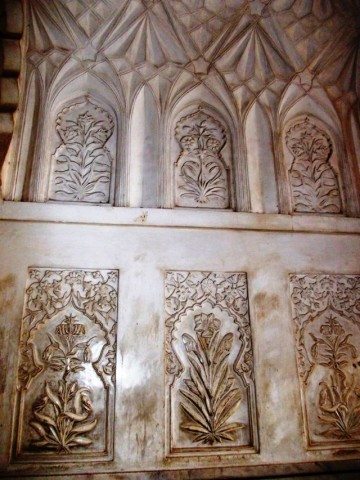 Doorways lead to an inner octagonal gallery, defined by stone screens, that overlooks the grave from an upper level, an architectural innovation uniface, to this monument. Corner quenches carry the lofty dome that roofs the chamber. White marble is used throughout, interspersed with delicately molded stucco. There is, however, no use of semiprecious stones. Exactly like the Taj Mahal, the mausoleum is framed by four lofty minarets that stand freely at the corners of the terrace, their part-octagonal bases continuing down to ground level. 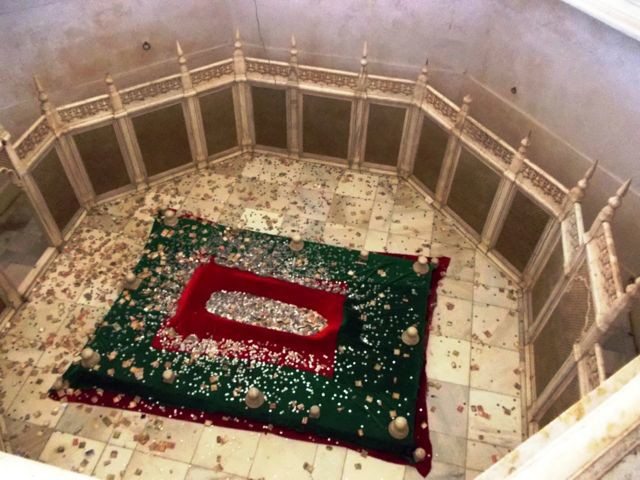 People looking at the grave

They have diminutive square pavilions in red sandstone at their summits. To the west of the tomb is a small mosque with finely worked cusped arches and corner minarets. Small recesses, rosettes, and arabesques embellish the facade. Mention may also be made here of the Sunheri Mahal, situated to the north of Bibi ka Maqbara, which is a notable building in the late Mughal style. It is of interest for the patches of old painting and gold work that adorn the walls. 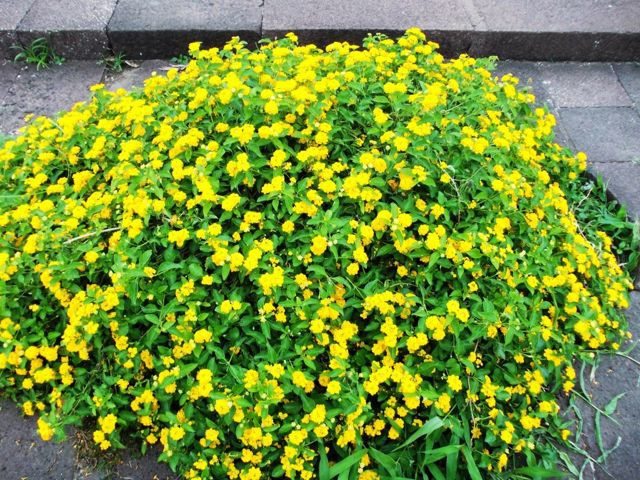 From the garden behind the Maqbara

How to reach Bibi ka Maqbara by Road
You can take a public transport like city bus or alternative you can hire private car, there are plenty of tour operator you can avail service from. The other mean of transport is using auto rickshaw, driving in is fun and cheap (not cheapest one but instead of going by private car etc) way to reach there. It’s advisable to fix the tariff prior to hiring the auto rickshaw.” 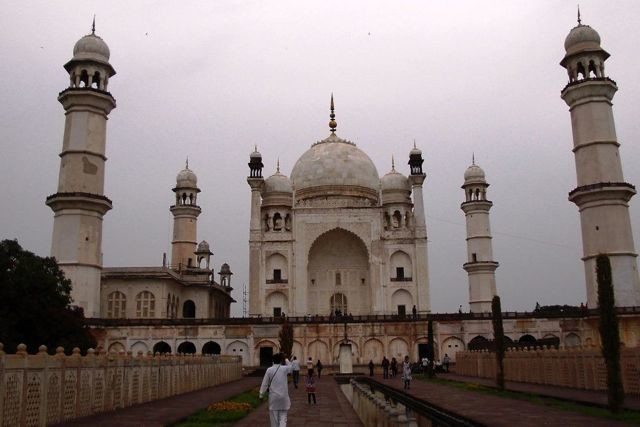 At the time of Sunset (Around 6:30 PM) Bibi ka Maqbara gets closed. We came out of monument, hired an auto-rickshaw for railway station. It took us around half an hour to reach there due to heavy traffic. Before entering the Railway station premises we searched for a good restaurant for Dinner and found one named “Balaji Restaurant”. Quality of food was just awesome or best in this tour for us.
After dinner we took train and reached Manmad junction and boarded mid night train for Ambala and after 30 hrs of continuous and exhausting journey reached home with some sweet and unforgettable memories. 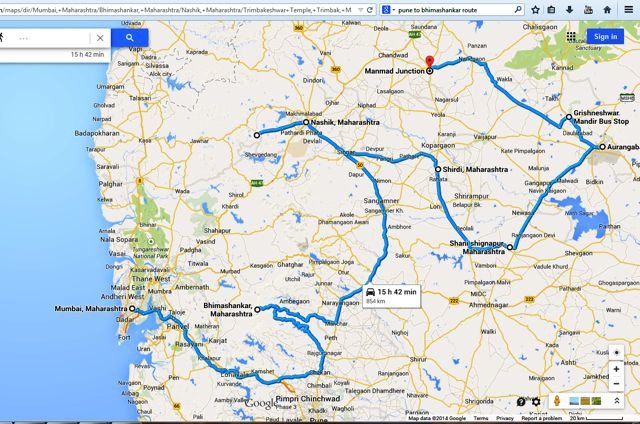 The route we followed in this Yatra

In the end I would like to thanks all friends and readers who encourage me by their valuable comments throughout this series and special thanks to Smita Dhall, the editor, for the support provided to me.