It was the summer of 2011, when I first heard the rendering of the above “gazal”, written by Amir Khusro, the noted lyricist of the 14th Century, through the eternal voice of Nusrat Fateh Ali Khan. The voice was coming out of a radio, kept at one of the shops in the old markets of the old Delhi. During those days, I was very much interested in the monuments of Delhi. Every weekend, I used to go to different places in Delhi for taking the pictures of those monuments. Back at home, I used to read a lot about them. Details of their history, articles on their construction designs etc. were really fascinating to me. In my enthusiasm, in those days, I created more than 80-90 photo-albums on those monuments and kept a detailed account of each of them.

Even on that fateful afternoon of the hot summer in Delhi, I was returning from the Memorial of Mirza Ghalib, at Ballimaran, Old Delhi, when the silky voice of the singer fell on my ears and transported me to some other level. Suddenly, the crowded market of Ballimaran became blurred, the cacophony of the market became diffused and the orchestra of the vehicles became mute. The only sound that was coming to my ears was of Nusrat Fateh Ali Khan’s singing. Slowly and steadily, each word of the lyrics of Amir Khusro’s gazal was touching my senses and creating an impact in the form of a great curiosity about the song and its context. Later on, the same context led me to an entirely new realm of Sufism in India.

But on that fateful night at Jabalpur, while enjoying warm vegetable soup sitting across the dinner table, we were talking about the mundane activities of that day. I still do not know how that normal discussion turned into a serious debate. The most prominent question was “What goes into the mind of a person who establishes a new religion?” My local contact at Jabalpur, then informed us about a Dargah of Hazrat Meerja Agha, who claimed to have founded a new sufi order. He insisted that being in that place, I should visit that dargah. So, after agreeing to visit there in the morning, we retired for the night. But, by that time, the question about the thoughts of persons who established new religions had overwhelmed me. In my faded dreams, various events from lives of Lord Buddha and Lord Mahavira, especially related to the renunciation of the worldly comforts flashed intermittently. Next morning, we went to the Ranital locality, where the most beautiful dargah of Jabalpur was situated. After parking the vehicle on the side of a busy crossing, we reached at the big Dargah Gate that had plastered wall and steel grills indicating its recent construction.

Entrance to the dargah

That gate opened into a very neatly kept compound. The main dargah of Hazrat Meerja Agah was visible in the middle of the compound like a crown. It was a circular building with elongated columns at the verandah and a full dome at the top. Painted in white, the building was looking very somber. Due to articulate carvings on its walls, ceiling and domes, it was looking beautiful. It was flanked from both sides by two separate tombs. The tomb at the right, with the slanting roof, was of his son, Hazrat Meerja Murtaza Hussain. The tomb at the left, with only a central dome and lined with red painted walls, was of Hazrat Meerza Maqsud-ul-Hasan and Bibi Zarina Begum. The entire complex was empty at that time, except for the watchman, who was drowsing in his chair as if it was he who had not slept last night.

Three tombs at the Dargah

The beautiful building of the main dargah of Hazrat Meerja Agah was inviting me to come inside so as to disclose the answers to the question raised last night. When I entered the sanctum sanctorum of the dargah, I saw that its enclosure, walls, and columns were also very artistically designed. It was an amalgamation of motifs, jallis and other patterns taken from the designs followed by all religion or faith. The mazaar of the Shaikh was covered in the red and green shawls. Left completely to myself I circumambulated around the mazaar. Desperately, I wanted to know more about the reasons and circumstances that led Hazrat Meerja Hussain to establish a new sufi order. But no one was present there. 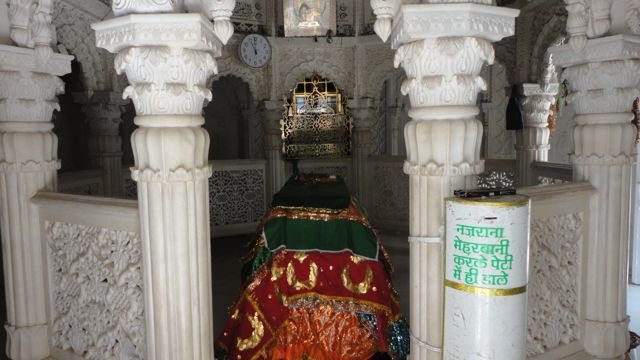 The mazaar of the founder of the Agahiya Order

In despair, when I came out of the inner sanctum sanctorum, my eyes fell on the outer wall of the main dargah. There were two marble plates fixed on the walls on which the life story of the Shaikh was inscribed. Hazrat was born in Lucknow, in a family that had migrated to India from Iran. His grandfather and father were given the positions of responsibilities in the government of those times and they soon had become part of the elite class of Lucknow. Hazrat was born with a fire of longing in his heart to know almighty and was always searching for knowledge by going to one teacher to another. During such exercise, he came to know about a Sufi Shaikh Shah Maqsus Alam residing in the town of Banda. In the tender age of 13 years, he left the comforts of his home surreptitiously and went to Banda and became the disciple of Shaikh Shah Maqsus Alam. There he acquired spiritual and worldly education. After the demise of the shaikh, he went to Bareilly to become the disciple of Hazrat Tajul-Aulia Shah Nizamuddin Hussain (R.A.). Though later he got married and had children, but his life was totally dedicated to the Sufi ways and traditions. During the first war of Independence, Hazrat Meerja Agah came to Jabalpur. There he established his Sufi tradition called “Agahiya Order” and in 1918 AD, he went for his heavenly abode. 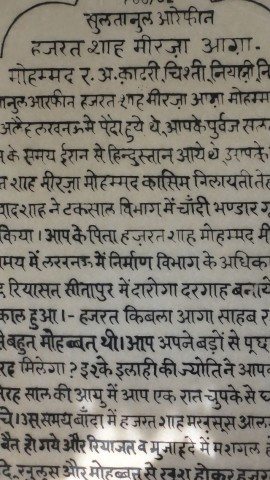 One of the marble plaques at the dargah

Hazrat Meerja Agha of Jabalpur started a new sufi order with the amalgamation of Qadiria, Chistiya and Niyazia orders. The Chistiya Order differed from the Qadiria order in its musical rendering of praises of Almighty. The Niyazia tradition also continued with the music and poetry. The new tradition founded at Jabalpur is named as “Agahiya Order”. Today it is followed in India (through Jabalpur center) and in Pakistan (through Karachi Center). After his death, the silsila started by him was continued by his son and onwards.

From his life story, I learnt that an “extreme desire to know the ultimate truth” is the main sentiment that goes into the mind of a person who establishes a new order. But there might be some other theories as well which I could not perceive then.
(P.S. : Please consult www.agharang.com for more information, if needed)

Next day morning we left for Paro Bhutan at 9 a.m.Only Bhutan air operates flights to Bhutan.It is a hour flight from Kolkata. On the way one can view Himalayan peaks including Kanchanjangabefore you land in Paro, which is in a valley  between mountains.I learn that only pilots who are experts in flying among mountains are engaged for this flight.first thing which strikes you is the cleanliness of airport and surroundings.We drove from airport to Thimpu which is 50 kms away through Bhutan countrysides