This travelogue is about my tour to the Sunderbans. Myself with some of my friends visited the Sunderban National Park in January 2015. Since I live in Kolkata, it is easy for us go places around south Bengal. Twice I went to the Sagardwip, the largest island in the Sunderban (once to attend Sagarmela and another on a general tour). But never I had been to the core of the Sunderbans. To fulfil that long cherished dream we went out in January last week this year.

SUNDERBAN means beautiful (sunder) forest (ban) in Bengali. The Sundarbans mangrove forest, one of the largest such forests in the world lies on the delta of the Ganges, Brahmaputra and Meghna rivers on the Bay of Bengal. After division of country, apprx 60% area went into Bangladesh, balance 40% lies in India. It was inscribed as world heritage site by UNESCO in 1997. So we decided to visit this area placed so near to Kolkata.

23rd January 2015 – From Kolkata to Canning :
Since the last weekend of January offered some holidays, we preferred to have a 2 night 3 day tour starting from 23-01-2015 and contacted a very private and homely tour operator. We took a local EMU, namely Canning local, to get down at terminal Canning station at around 10.50 in the morning. It normally takes 2 hr journey from Sealdah south station. At Canning, other tourists of our group assembled, counted to be 20 in total, and got introduced to each other while having a nice pack of snacks.
But my friendly advice to all to avoid rail journey, rather take SUV or jeep type of car from Kolkata, or can make the entire journey by launch itself starting from river Hooghly at Kolkata. There are govt package tour, as well as AC launch tour operated by renowned private companies.

From Canning to Sonakhali :
From Canning railway station we went straight to Sonakhali ghat. A four cylinder launch “MB Maa Chandi” was waiting for us. It was a small but comfortable double decker launch with inbuilt toilets. The upper deck was equipped with seating facility in the front side and kitchen, dining space and a toilet in the back side. The lower deck was housed with many double beds in a dormitory system with two toilets in the front side. The motor room was inside a separate chamber in the back side. All the tourists taken their respective beds and placed all baggage there. Then we sat in the upper deck and the journey from Sonakhali started just before 12 noon. 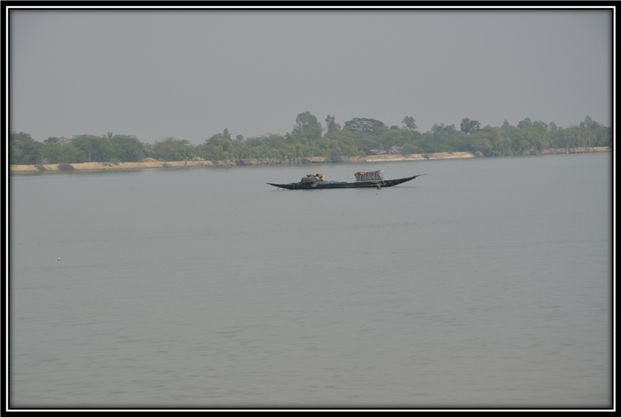 Rivers in the Sunderbans are totally different from the ones we used to see in other parts of India. There are numerous rivers with continuous flow towards the south in case of low tide (bhata). The flow is reverse in case of high tide (jwar). Rivers are wide and inter-connected with each other with so many water channels. All are natural. The banks are glossy muddy and do sparkle when direct sun fall on them. Small red crabs are commonly seen everywhere. There are crocodiles also, but not so common in densely populated banks. But one should be vigil enough not to fall prey to them.

Journey started to the interior of Sunderbans :

To Gosaba:
We continued our journey through the river. There were human habitations on both the river banks. Gradually, presence of human beings and domestication started decreasing. River got wider. Mangrove forest still not started to be seen. First we stopped at Gosaba. It took almost 50 minutes to reach there. Just in front of the ghat, there was local police station. On turning to the right, we visited the bungalow, where Shri Rabindra Nath Tagore stayed on 30th and 31st December 1932 on an invitation of Sir Daniel Hamilton. The bungalow is surrounded by a nice garden, where a full size statue of Tagore is placed. The old bungalow could survive the devastating hurricane Aila that pulverised entire south Bengal on 25-May-2009. We came back to launch and had freshly cooked hot and smoky lunch. From Gosaba, we proceeded to our next venue Sajnekhali tiger reserve. 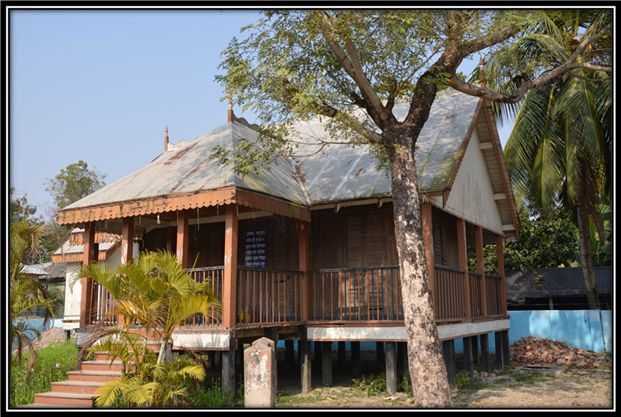 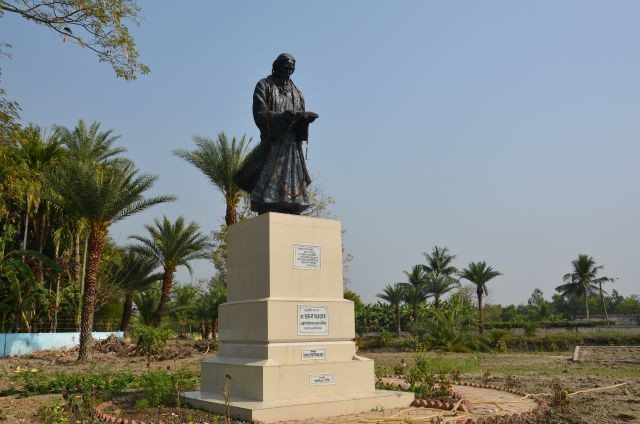 To Sajnekhali Tiger Reserve:
In this part of the journey we could see the famous mangrove forest, since we entered into a totally different world. The bushy forest was not tall enough, but was very dense, so that any animal can easily hide behind it. Apart from Sundari tree, there was Hetal, which is very favourite of the royal Bengal tigers. In this area, rivers are very wide. Somewhere it is so wide that you cannot see the opposite bank. Our launch pilot continued to drive the vessel close to the river bank, keeping a safe distance of 30 feet and allowed us to have a close view of the natural forest. We were simply speechless. The surrounding was absolutely calm and quite. Only sound was that of the engine of our launch. We saw lot of wild monkeys and many species of birds. But no tiger could be seen. 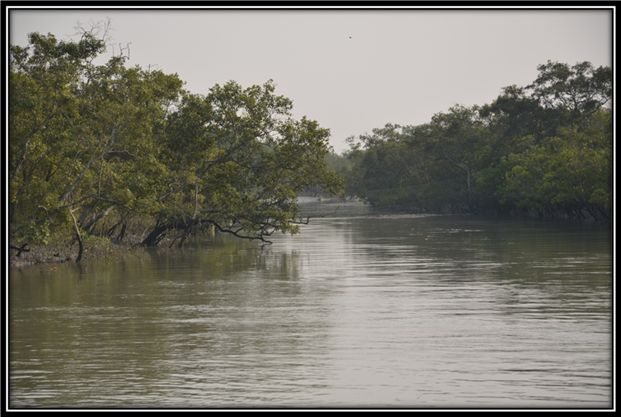 We reached Sajnekhali tiger reserve at around 3 pm. Here you have to get the permit issued by Sunderban Tiger Conservation Foundation Trust. The permit is essential to visit Sunderbans. It would be better to mention here that, in all tiger reserve islands, the area, where govt. employees, tourists make movement, are safeguarded with thick wire mesh high boundaries. Right from start of river ghat, upto the inner most area, you will find high wall of iron grid. In this island also, the office area, permit counter, handicraft selling centre, watch tower – all are surrounded by wire mesh boundary for protection from tiger. Useful notice board mentioning entry fee, fee for camera, guides etc. is placed at prime position. 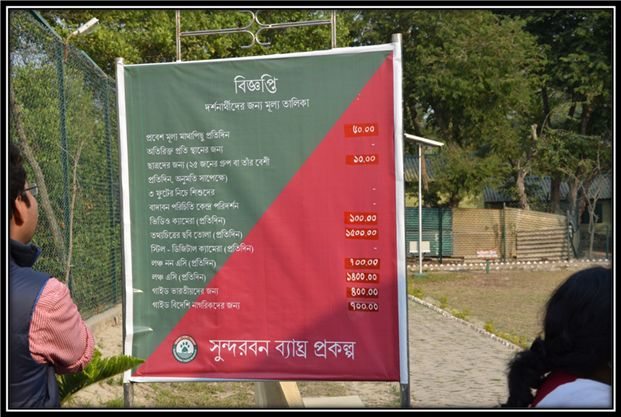 A govt owned tourist lodge is available at Sajnekhali for accommodation, which has non-AC suite, non-AC double bedded room and dormitory. The surrounding is very natural and calm, far from city noise. 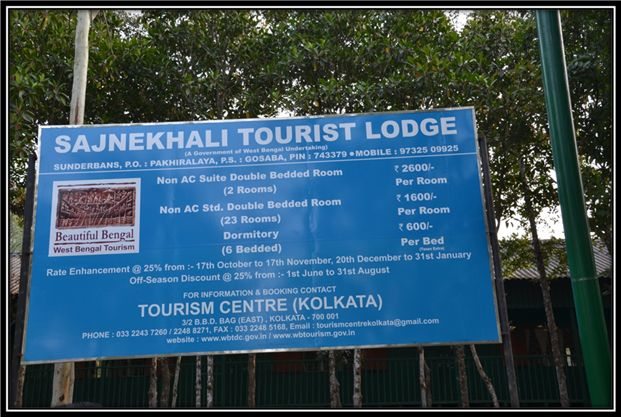 There is a Banbibi temple nearer office area. Let us have a brief idea about Banbibi. Since time immortal, human beings kept safe distance from tigers. In many places in India, tiger is worshipped for safety. In north Bengal, tiger god is named “Sonaroy”. In south Bengal, his name is “Dakshinroy”. Simultaneously, a goddess is also there named “Banbibi”. This goddess is religion independent. It means, both hindus and muslims do worship Banbibi. Before entering into core area, woodcutters, honey collectors, fishermen etc. worship Banbibi or Dakshinroy for protection.

Now let us come back to Sajnekhali. In this island, there is a beautiful museum with top corporate look. Plantations and living beings at Sunderbans have been very well depicted in this museum. There are some clay models of tiger and fishermen, who just look like real ones. Our visit to this island was enjoyable. Then we moved on to our next venue at Sudhanyakhali tiger reserve. 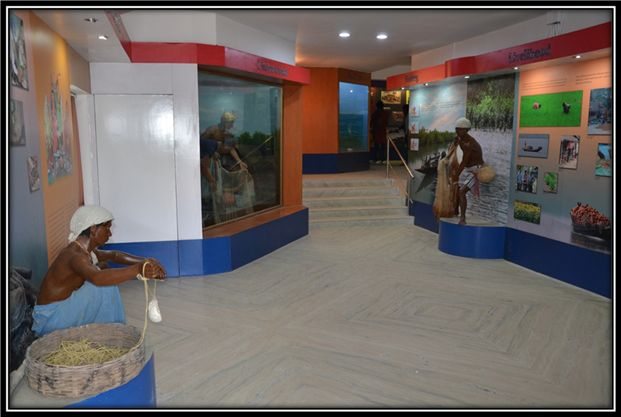 To Sudhanyakhali Tiger Resevre:
We reached Sudhanyakhali at 4.30 pm. Here also we visited the Banbibi temple first. Then we went up to the top of watch tower. The sun was tilting towards the west. The golden glow made the surrounding very mysterious and romantic. From high above we kept on looking at the fresh water pond created for animals. They come here to drink water and allow tourists to have a glance at them. Fortunately we saw so many deers roaming around the pond. A little one was running here and there fearlessly just like our own kids behave in a park. Some were drinking water and some went away towards the surrounding forest. We stood atop the tower and enjoyed the pure air. Adjoining forest and river could easily be seen. Then the security personnel requested us to vacate the place to go back to our launch. As because tigers can come out in the evening, our priority should be to remain safe with all ladies and kids. We boarded our launch at 5 pm safely. 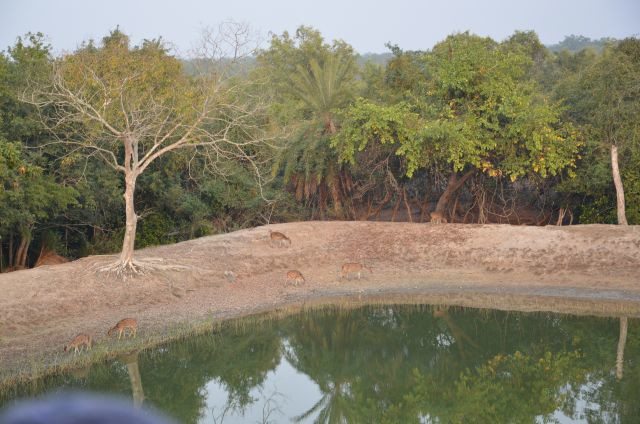 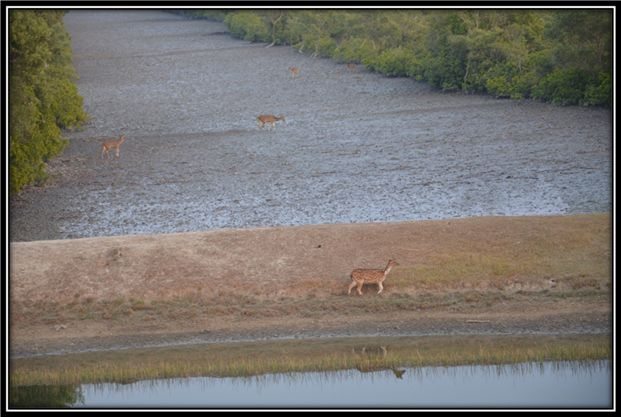 We decided to anchor near Pakhirala island and spend the night inside the launch. I already written earlier that the lower deck housed so many double beds kept in a typical dormitory pattern. Everybody got into their beds and lied down for taking rest. The day was very hectic for us. We took rest for half an hour and take a quick decision to go to the nearby Pakhirala island.

Pakhirala Island:
As we anchored very near to the Pakhirala island, it took only few minutes to reach the river ghat. The island was a densely populated one. It was a typical village with many hotels and so many local shops displaying gift items for the tourists. The items are not made over there, but mostly brought from Kolkata. We visited tea shops and fish market. Fish was more costly than Kolkata, we could not understand why, but were really fresh. Even prawns were live and moving. We tried to buy white honey, as white honey of Sunderban is famous. But the quality was poor, as it was contaminated with high proportion of water. Our launch pilot advised us to buy in the months of Chaitra and Baishakh, as honey collectors collect fresh honey in those months. After having local snacks and tea, we came back to launch.

We had our dinner prepared at launch. No room left by our tour operator for any complaint. Food was good. We sat on the upper deck and gossiped endlessly. As preceding 20th was Amavasya, the night was starry without moon. After so many years I could see nearly horizon to horizon night sky, which is absolutely impossible in metro cities. We tried to identify stars. Somebody was singing in local tune from not very far away. The night was God given gift. As midnight was approaching, we got down to the lower deck to have sleep. Next day would also be hectic again. My body was tired. Right from the morning we were in movement and covered a huge distance so far. Sleep took no time to engulf me with its motherly touch.

The Sundarbans : A long cherished dream was last modified: January 31st, 2022 by SANTANU

Over the Choppy Sea to the Andaman Archipelago Every year, our small group of veterans and ladies meet up and travel mostly to…