Though Daringbari is quite a, not so popular place for tourists but from all direction, an ideal place to start for a person who wants to open his hill terrain account. We had a tight schedule before 28 th march 2016 and the day we made the go decision was 20 th of that month only. So all set on 23 rd march with my Maruti Suzuki Swift Dezire VXI. 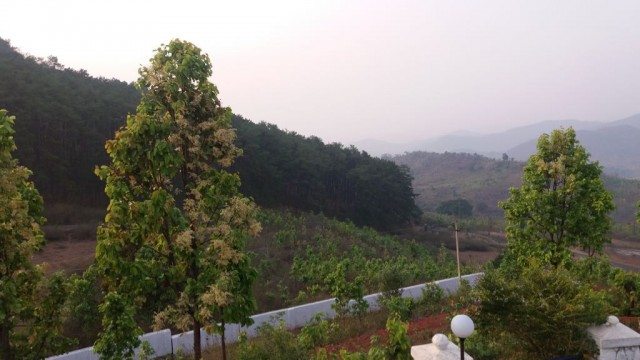 We started early morning on 23rd march from home at south Kolkata around 0530 hrs and through night dwelling trucks took our first halt for breakfast at the famous usual Sher- e- Punjab at Kolaghat. Some years before the dhaba was in its prime but when we reached there it seem a bit unhygienic and not cleaned in a decent manner, may be for “dol yatra” on that day in West Bengal.However we finished there and started again for our first destination to Balasore. I tried to booked all our hotels online before starting and only succeeded for Balasore only, though tried for Chandipur but due to unavailability I went for Balasore Panthanivas.

For many veteran travellers it may be very known but for me like newbies it was quite an experience. I over trusted GPS. From the beginning GPS was running all the way for a back up but after entering Balasore I started following it faithfully which leads me first through a very very over crowded morning market and it was simply a nightmare. After finishing that incident, after sometimes I realized that the GPS is leading me towards Candipur Panthanivas not the Balasore one. So I switched it off and asked locals to guide me to the destination. At around 1000hrs were made up to Balasore and at 1100hrs finally took shelter inside the hotel.

After finished lunch and get refreshed, at 1630 hrs we started for Chandipur which is only 12 km away through evening crowd. The beach was excellent but for those who love to lost inside seaside, virgin like wilderness. The shore was very soothing under the evening column of shadow with a very far sea and an entire beach meadow to explore. Though already famous but still very calm sea side may be for it has a sea which travels very far during low tide, not so fun for bathers. 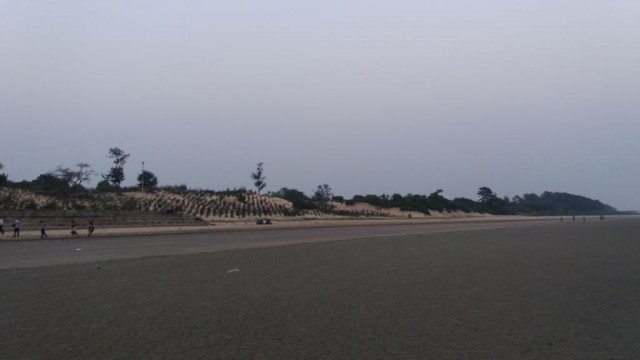 Chandipur beach in the evening

Our next day trip was Panchalingeshwar temple at Nilgiri. We were supposed to start early but due to” holi” that day in odissa, postponed it till mid day and around 1230 hrs on 24th march started to Panchalingeshwar. Road was good with some repairing. The site was 29 kms from our place and we ordered our lunch at Panchalingeshwar panthasala and proceeded to the temple. It was more that 300 steps to reach there. 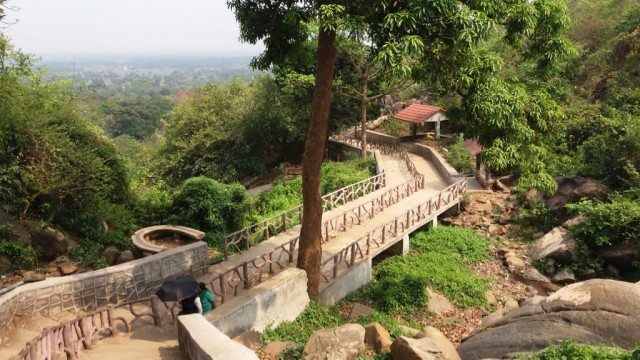 Ensconced in the serene and splendid green environs of Nilgiri, the five lingams at Panchalingeshwar, the revered venue for numerous devotees, are bathed by the iridescent and sparkling stream, though it became very scanty during our time because it was dry season already. Legend has it that these lingams were installed in this beautiful abode by King Banasura himself. A place of choice of nature lovers and deep thinkers.

The Panchalingeshwar is situated over the hills under Devgiri range. Monstrous rocks scattered all over the hills and silence of the forest prevails the beauty. This is a unique place where one can find five lingas. It is actually a part of Kuldiha forest known for many mammals like bears, bison, deer, elephants and panthers.

At Panchalingeshwar after finished lunch we traveled for Emami Jagannath temple at Balgopalpur via rajbari, only 23 km away on our return at Balasore stay.

If time permits one can visit Kuldiha forest and Devkunda water falls as well but have to reach there before 1400 hrs.

The seventy-eight feet high scintillating shrine has been contracted on a sprawling three acres of land on the premises of Balasore town Balgopalpur based Emami paper mill.

The temple claimed to be a replica of the Puri Jagannath temple also bears the world renowned Black Pagoda Konark Sun Temple’s tinge with sixteen Konark Wheels engraved on it’s part from four horses. It has been build with an expenditure of 11 chores by the renowned architect Padma Vibhusan Raghunath Mahapatra and took 4 long years to be finished.

We spend the rest evening idle and took preparations for next day destination to Daringbari.

Early at 0500 on 25th, we continued for Daringbari. All the beautiful roads we availed through Cuttok, Bhubaneswar, Rambha lastly lead us to the base of range of Hillocks to Daringbari of Kandhmal district with an elevation of 915 m. It was of odd 445 km we covered around 1200 hrs after some halts on the road. We stayed at PWD bang low there. As no rooms were air conditioned and the time we travel was bit hot and the voltage problem caused a slow movement of ceiling fan troubled us much at early night. The problem solved as night became old and the power stabilized. Morning started with cool temperature was quite shooting.

Hill view point, and Eco nature park is very near from the town souk. The beauty of these place is really adorable. The fragrance of tranquil nature enables you to vacuum your mind to a heavenly place. One can sit there a just let the soul do the rest. There are many places to visit near Daringbari like falls, coffee plantation, local tribes. Around 130 km Phulbani is also an attractive place with wild sanctuary and water falls with unspeakable wilderness.

On 26th in the morning 0600 hrs we started for Taptapani, a famous hot spring in the way to Gopalpur. It we 148 km trip with some hill roads with hair pin blends, some part of the road I’d, just horrible for the cars of low ground clearance. Near Taptapani the road became excellent like butter with all ghat road characteristic driving. While going to Daringbari we followed the most stiffest road with 33 hairpin. At some points road became violent with very scanty traffic. It is advisable to follow the route via taptapani which is in the bearable limit. At 1030 hrs on 26th reached Taptapani. 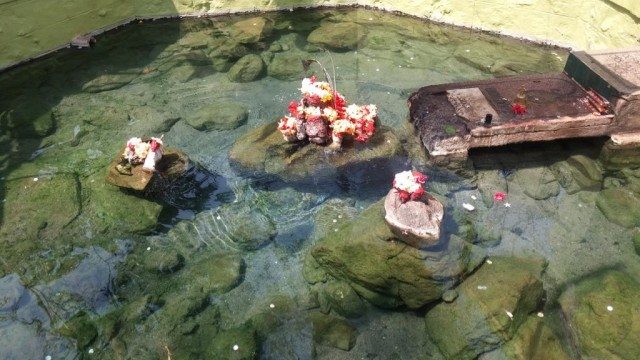 The place was quite with very few visitors. The hot sulfur water spring is in the eastern ghats of Odissa of Ganjam district. Also a pilgrim place.

From there Gopalpur was only 50 km with very smooth beautiful road to travel. We went there in a hiss by 1200 hrs. While in Gopalpur city I again faced that GPS problem and ended up with extremely narrow lane. So turned off again and relied upon locals to reach Gopalpur beach, Sea Pearl Hotel.

As Gopalpur was not in our tour program so we couldn’t find a decent hotel instead arranged a beautiful home to checked in. The stay for that day until our departure on 27th for Kolkata of 615 km was excellent.

Thank ​you all for listening me and to become a part of GHUMAKKAR.

The History of Residency can be traced back to 1774 AD when Nawab Shuauddahula agreed to have a British Resident stationed in Awadh. Residency…