During a leisure moment in the 1st week of January 2016, I called my adventurous colleague Swaraj to know whether he was willing to go to the famous GangaSagar Mela with me. I told him that there will be no arrangement for staying at Sagar Dweep. So we will start very early in the morning. At most 200 km of train journey plus 60 km of road journey plus 1 hr journey through waterways will have to be covered in one single day during the entire trip. That is why, our 1 day touring plan needed determination, endurance and affinity for religious sentiment to make it successful. This year, the six day annual fair was scheduled to start from 10th Jan 2016. Swaraj consented immediately and agreed to make it happen on 10th Jan 2016, i.e. on next Sunday, on the inauguration day itself.

For the rest of the day in my office, the sound of gentle sea waves and chirping of seagulls continued to haunt me. Face of monks and pilgrims stared at me from the pages of office files. My ghumakkar self overwhelmed my urban life once again. 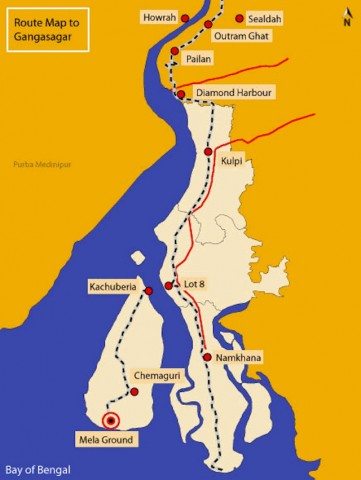 Ganga Sagar mela is held every year in Sagar island in West Bengal, which is the largest of all the islands of Sunderbans (falling within Indian territory). While Maha Kumbh fair is held once in every 12 years and Kumbh fair once in every four years at different locations, Sagar mela is held every year at the same place drawing huge turnout irrespective of caste, colour, creed and age. Last year the turnout was 12 Lakh and this year the Govt. of WB made all the arrangements for an expected turnout of 20 Lakh. The holy dip is observed on the day of Makar Sankranti, the day when the Sun makes a transition to Capricorn from Sagittarius. So what pulls so many people here at Sagar island every year without much propaganda and marketing? It is the strong belief of a Hindu in his / her own religion, in mythology with an expectation to be more virtuous, to attain more piousness. Such pilgrims believe that “Har Tirath Bar Bar, Ganga Sagar Ek baar’. It is a place where some unhuman young ones living in the hollow heaven abandon their aged family members at the sea shore to be taken care of by Ganga maiyya, without knowing the fact that only a human being can give shelter to another human being. It is also place where approximately one and a half century ago, mothers used to sacrifice their child before Ganga maiya to comply a promise made to the goddess earlier. Even after using my last drop of intellect, I failed to appreciate such kind of belief or promise. When human life is sacrificed or lost, what else is left?

–Local train journey from Sealdah south terminal station upto Kakdwip station (this is not a terminal station, railway line goes upto Namkhana – as of now). Then by cycle van / Toto upto Harwood Point jetty. Then river Muriganga is to be crossed by ferry / vessel to reach Kachuberia jetty located at the north east point of the Sagar island. Then 1 hour bus journey or 50 minute car journey from Kachuberia upto Kapil Muni temple located at the south west point of the Sagar island.

People can also go by their own vehicle from Kolkata. But transfer of the vehicle through Muriganga river requires enough time and patience. Vehicles are to be placed in long queue for transfer through high capacity vessels. You have to wait for high tide so that vessel movement can take place. In some cases, transfer of personal vehicles in this manner takes more than one day. 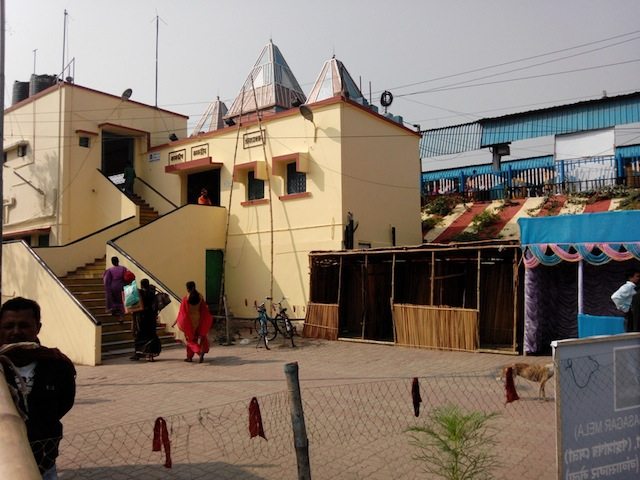 Our journey from Kolkata to Sagardwip
Swaraj took the morning Namkhana EMU local from Sealdah South terminal station on 10th Jan 2016. I boarded the same train from Jadavpur station, which reached us Kakdwip station at around 10.10 am completing nearly 2 and a half hour journey from Sealdah. Train fare was a low as Rs.25/- (railway distance between Jadavpur and Kakdwip is 87 km). Kakdwip is a small town with moderate commercial activity. But during mela time, lakhs of pilgrims pass through this area. The top of the station is pyramid shaped, which looks like top of Kapil muni temple. Outside the station, scores of cycle van and Toto (battery operated auto rickshaw type van) were available. We took a cycle van for two of us and reached near Harwood point in exchange of Rs.120/- covering 20 minute journey. The route from railway station to Harwood point went through villages. On the way we crossed several agricultural areas. View of paddy fields, paddy separation and storage areas, hutment areas inside which cultivation of betel leaf (paan) took place etc. were simply amazing. It was a nice snapshot view of rural Bengal. 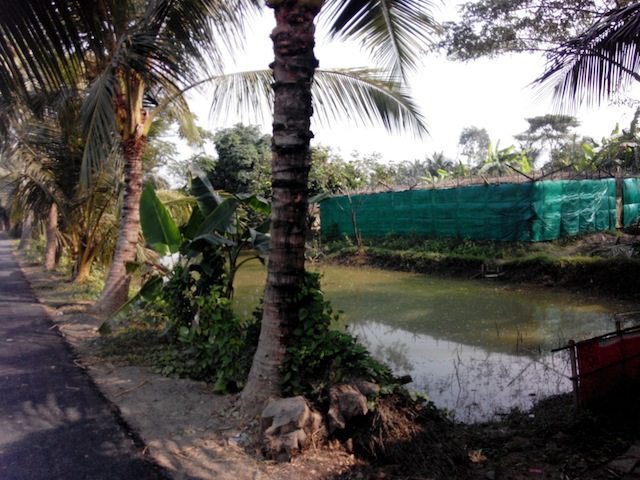 Right from Kakdwip station, continuous announcements in public address system helped pilgrims to get themselves aware of various facilities available for their benefit free of charges. Whether it was for medical treatment or for drinking water or for conveyance facilities and what not, apart from the lost and found informations. Entire route from station to Harwood Point jetty was adequately covered by multilingual directional signs and flex banners, so that even a single person will not face any difficulty in reaching the jetty point. This year the Sagar mela was declared as Green Fair by Bengal Govt. Open air defecation was strictly prohibited. With the help of UNICEF and World Bank, 12,000 toilets were provided at various locations to keep the surrounding hygienic and healthy. Navy, Coast Guard and BSF kept vigil covering entire riverine stretch including air surveillance. Several drones were deployed around the mela ground for round the clock security checking and aerial photography. At the same time, Police personnel of WB Govt were busy in helping pilgrims to reach destination and to find out their lost loved ones. You can not play with your guests, when they are 20 Lakh in number!!! 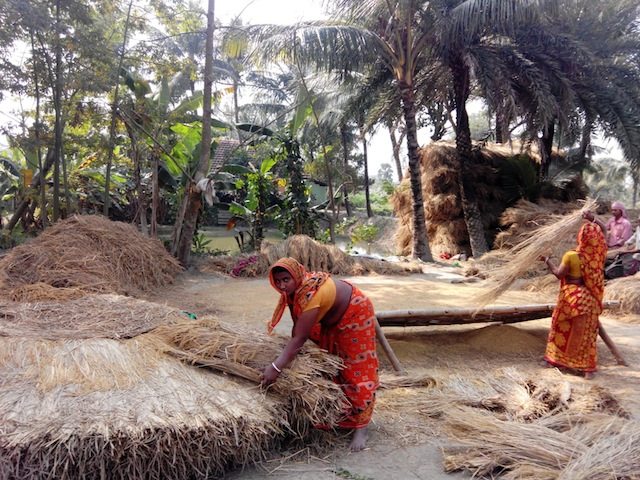 Paddy is being separated from hay. Important to note that women do work hand in hand with male counterpart

When we reached Harwood point jetty number-4, we were lucky to know that high tide was going on in Muriganga river and a vessel was about to reach the jetty within 10 minutes to pick up passengers waiting for Kachuberia. In Sunderban area, crossing of ferries largely depends on high tide. During low tide, lower part of the vessel touches the muddy surface. So ferry transfer remains suspended, till high tide comes.

Harwood Point jetty no.4. The endless Muriganga river is just behind the ticket booking counter 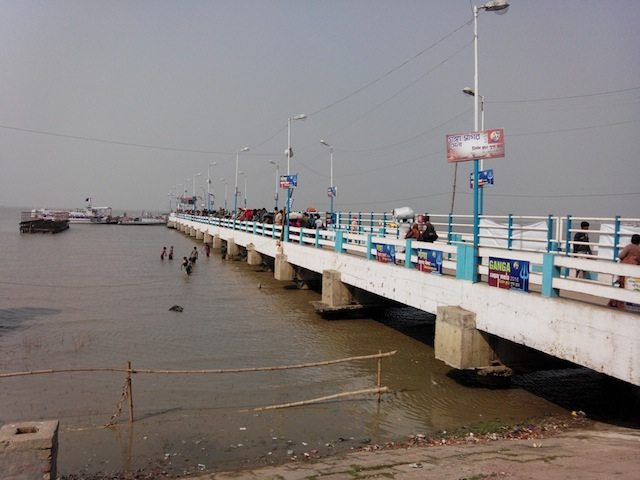 The long bridge upto the jetty

We took tickets @Rs.40/- for each of us and boarded the vessel. It was a large one, which carried more than 100 passengers. We did not sit, but preferred to stand by the corner railing for taking photography of the Muriganga river. After blowing the horn, the vessel started its journey from jetty no.4 of Harwood Point towards Kachuberia jetty of Sagar island. During the journey, flock of seagulls continued to fly with us maintaining a safe distance from the end of the vessel. Local hawkers were selling sealed packets of bird foods, which were in fact powdered pulse in solid spherical shape (besan ki goli). We bought some of them and threw up in the sky. The birds must be well accustomed with this practice, as nearly all of the food particles were caught by them mid air. More than 50 seaguls accompanied us during the entire journey, giving enough time for the photo enthusiasts to take still as well as video photography. 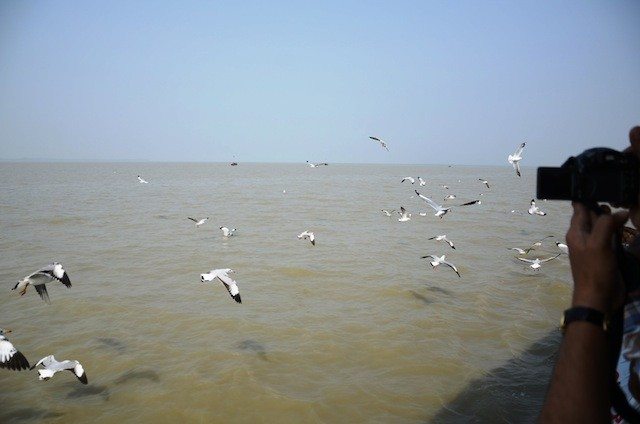 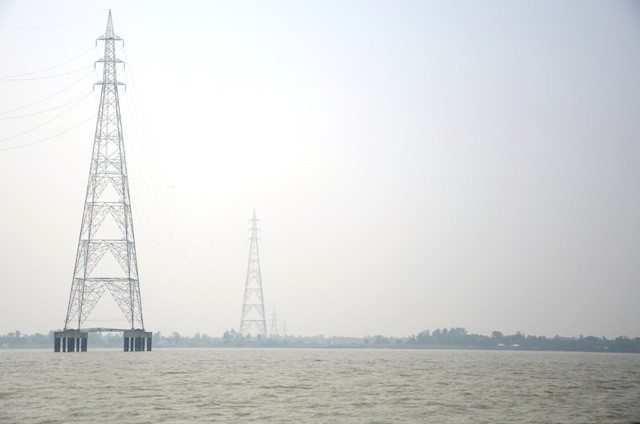 Transmission towers erected in the very deep Muriganga river. Power is transmitted to Sagar island from main land with the help of these towers

Once the Sagar island became visible in the horizon for the first time, quotes of Nabakumar came to my mind. Nabakumar is a prominent character in the novel named “Kapalkundala” authored by Rishi Bankim Chandra Chatterjee (who also wrote our national song “Vande Mataram”). In the said novel, in similar situation, Nabakumar uttered following shlokas:

“The circular shaped island, viewed from far away, raised from the blue but salty sea water, surrounded by slim tamal and tal (the fanpalm or palmyra) trees, appeared in the horizon like a black line”. The first sight of the mythological island was simply spellbound.

Completing the 40 minutes waterway journey, we reached Kachuberia jetty in the Sagar island. With fellow pilgrims we went to the bus stand, which took 5 minutes walking from the jetty. During mela (Ganga sagar fair) time, Govt of WB keeps ready hundreds of busses, cars, Tata Magic, Mahindra Maxo etc. especially for the pilgrims. All of such vehicles ply virtually non-stop round the clock day and night. In the public address system announcements were playing aloud in Hindi and Bengali about various medical and other facilities available in Kakdwip and Sagar island, as this fair is largely participated by pilgrims from UP and Bihar. We took a Mahindra Maxo on shared basis @Rs.100/- per head for the 50 minute journey upto Sagar. I want to mention here that Kachuberia jetty is located at the north east point of the Sagar island and the area, where temple of Kapil Muni is situated and annual fair is held, is located on the south western point, popularly named as “SAGAR” (please follow the map). So we had to cross the island diagonally southbound to reach the destination. The Mahindra Maxo reached us near Kapil Muni temple in 50 minutes. So at last we reached Sagar. Jai Ganga maiya !!!

The unification area, where pilgrims from all over India meet with each other

…and the journey continues in Part II…

Being one of the 12 Lac++ pilgrims to Gangasagar Mela was last modified: March 30th, 2022 by SANTANU

Next day, we left the hotel at 6.30 am and hired a jeep to take us to Govindghat, the starting point of the 14-kilometer trek to the Valley of Flowers (VoF) and Hemkund Sahib, which is another nine kilometers from the Valley. It took us 1.30 hours to reach Govindghat.