After a long and arduous journey, we finally managed to reach the town of Kedarnath.

The continuous rains had made the final climb even tougher. While I waited with the kids, my husband and Ajay bhaiya went in search of a tented accommodation put up by GMVN. I was told that there was a long queue even for this basic accommodation, however Ajaybhaiya managed to get 5 beds for us in tent no C80. The accommodation was very basic and each bed meant a foam mattress and a sleeping bag. Without thinking twice we all took our ‘beds’ immediately. We shared the tent with 3 more people.

Ajay bhaiya went out to source some hot parathas that we had for dinner. One of the main problems in these tented accommodations was the unavailability of toilets. There were no attached toilets and the common toilets had been completely destroyed in a snowstorm couple of days earlier. The remnants were clearly visible when the children went out to relieve themselves at night. 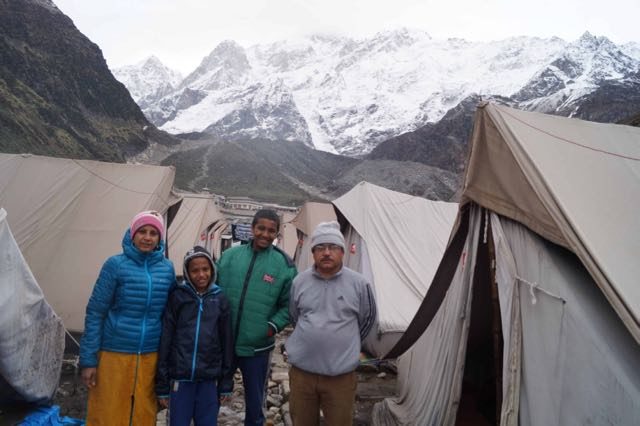 Next morning while I gathered our belongings that were scattered throughout the tent, my husband and Ajay bhaiya went into Kedarnath town and located a decent accommodation. The helicopters had started their early morning sorties. We immediately shifted to the new room which had a great view of the surrounding mountains and readied ourselves for the darshan. The ‘normal’ line moved more or less in order as there were several policemen ensuring that people do not break the queue. However all helicopter yatris are allowed special VIP darshan. All of us had a great darshan and could physically touch and feel the main lingam. 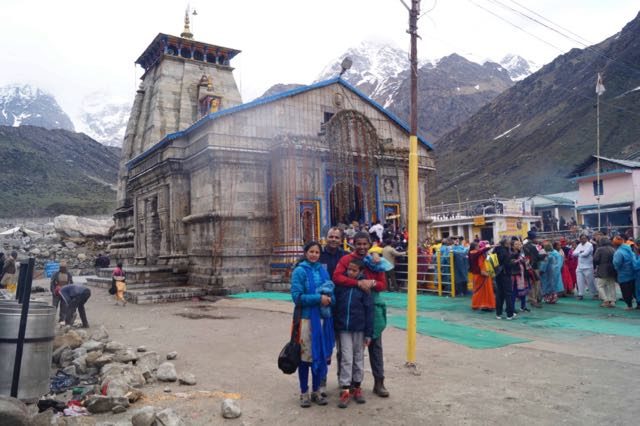 After the darshan we immediately went to the rear side of the temple to see the ‘Bhimshila’, the miracle boulder that was perched at the boundary of the temple and had supposedly diverted the mud flow from damaging the temple. It really seemed to be a true act of God. The path the mud flow had taken from Gandhi tal, whose walls had ruptured leading to the floods, were clearly visible. Some restoration work was been carried out and a big wall was been constructed around the temple periphery but it actually seemed very fragile against such a brutal force of nature.. 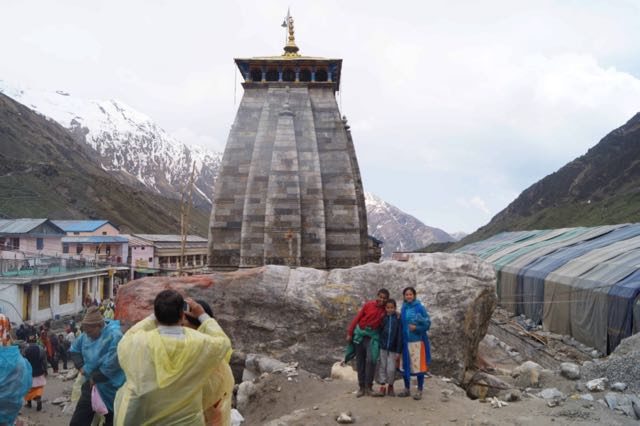 the famous Bhimshila with Roshit and Ronit

We spent the remaining morning exploring the town and were deeply saddened to see the extent of damage still visible after all these years. Parts of broken houses, kitchen gas stoves, utensils, toilets etc. were still strewn around different parts of the town. We wanted to explore Chorabari glacier and Gandhital but were denied permission by the local authorities. I was told that the area was dangerous that time due to some melting glaciers. 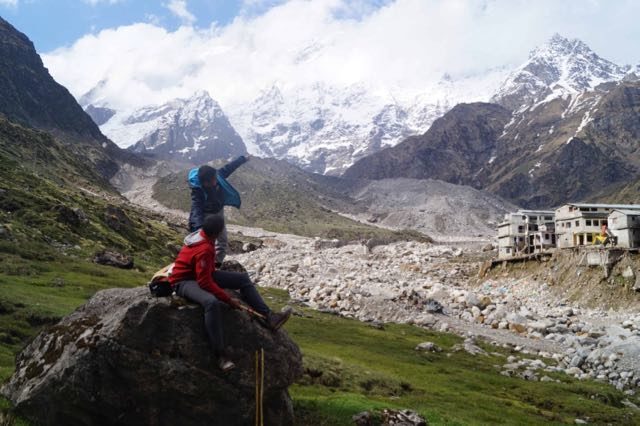 The other bank of the Mandakini

Ajay bhaiya, my husband and kids crossed over to the other side of the river Mandakini and spent the afternoon playing the flute and singing while I took advantage of their absence to take a quick nap. The orchestra playing on the other side of the Mandakini had to wind up soon as the sky became overcast and it started to rain which forced them to run back to the hotel. 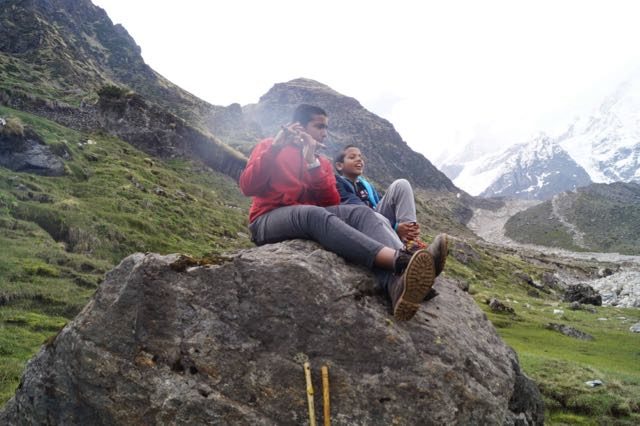 For dinner we located a dhaba where the local mule handlers and pithus had food. For Rs.150/- per person this was a great bargain as it was ‘bhar pet’ (as much as you can have). The food was fresh and prepared very well. Above all it was served with a lot of love and enthusiasm. This was in contrast to the eateries on the main street where neither the food nor the service was up to the mark.

After dinner we noticed that the darshan line was considerably smaller and tried our luck again for a second darshan. Though we could enter the temple, no one was allowed near the main shila as it was decked up with flowers and a gold (plated) serpent. 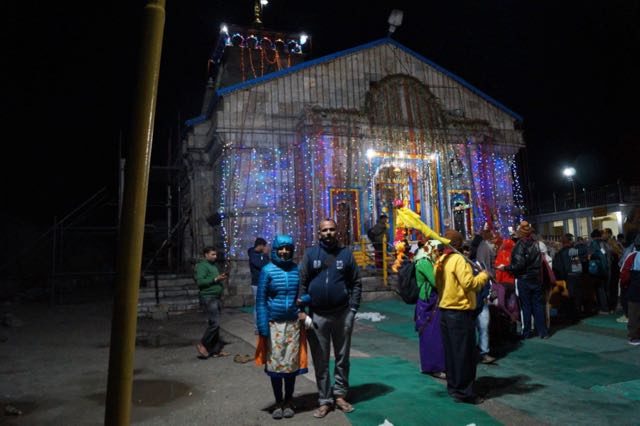 Kedarnathji – decked up at night

Next morning though we had decided on taking a mule ride back to Sonprayag, to save time and energy, as we had to drive back the same day, the boys changed their mind at the last moment and we started to trek back to Gaurikund. The fresh and crisp morning air was invigorating and filled us with lot of energy. A local deity who had been brought from a nearby temple for darshan of Kedarnathji last night was being given a ritual bath in the Mandakini before being taken back to his own village.

Pilgrims who had halted overnight at Lincholi or some other place midway were slowly making their way upwards towards Kedarnath. We again crossed the two glaciers we had met on our way up. They already seemed to have melted a couple of feet in the last 2 days.

As the day progressed the mules and their masters started to takeover the narrow mountain paths. Riding on a mule has its own perils as we watched with surprise couple of riders fall off their stead. Fortunately they did not fall towards the ravine but the mule handlers seemed hardly bothered. We met a grieving mule handler whose mule had fallen into the Mandakini and had been washed away.

Soon even the downhill trek seemed to be taking its toll on the knees and calf muscles. We stopped at several places for some Lassi and wherever we could find natural mineral water. The water flowing down the mountain sides have a distinctly sweet taste and serve like energy drinks for both mules and pilgrims.

We were soon at Gaurikund which greeted us with its ubiquitous mule stench. We had planned to take a dip at the hot water spring at Gaurikund but were extremely saddened to see that the entire hotel complex surrounding the hot water bath pool were totally wiped out. The hot water pools had been inundated with mud and had not been cleaned yet. Hot water was ebbing from various points and had formed shallow pools. The devoted, however, were collecting this water using mugs for either bathing or storing it in Bisleri bottles. We were told that the ladies bathing chamber was a tad better but even this did not encourage us to venture that place. 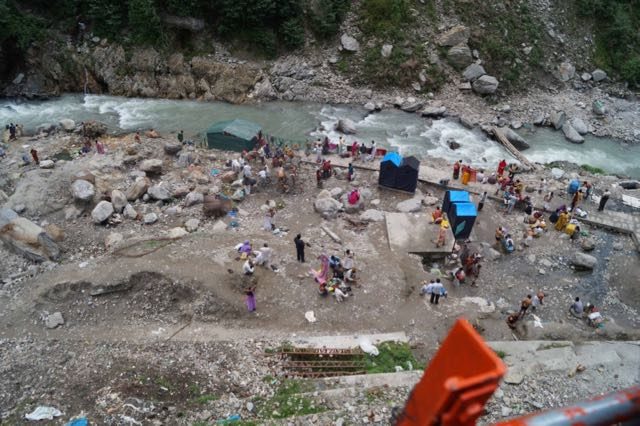 We took a wrong turn and landed up in front of shack where a Nepali was serving a unique tasting garam masala flavoured momos. We quickly finished off 6 plates before we took a shared Bolero back to Sonprayag. It was overcast and it soon started to drizzle.

The Bhandara near the car park was serving hot Rice, Choley and Rotis which were, as usual, very very tasty. We all had our double servings and started back our drive to Rishikesh. The skies opened up around 40 kms before Rishikesh which slowed us down considerably. We reached Rishikesh by 7pm and checked into a room booked by Ajay bhaiya beforehand. Ajay bhaiya parted ways at Rishikesh for Dehradun.

The next morning we left early for Delhi where we stopped at Kankhal for Choley and Daal. The money saved on the mule rides were suitably spent on Crystal Water Park, Rorkee which we had promised Ronit and Roshit if they trekked to Kedarnath and back. We were the first ones to get into the park at 10:45 am and were expecting the park to be relatively empty being working weekday.

We could not have been more wrong as the park filled up with revelers soon. We left the water park after trying out all their water slides by 3pm. A terrible traffic jam welcomed us at Delhi border which was a consequence of the ongoing widening of NH24.

The Kedarnath trek though quite tough and tiring had infact charged up the boys and it was nice to see them excitedly planning for their next sojourn to Gaumukh.