This is my first post on Ghumakkar and the reason why I registered at this site was that the experiences shared by its members helped us a lot on this road trip.Thank you so much.

We (my husband, son and myself) began our trip at 5.15am from Delhi and hit the NH 24. We had expected the traffic to be much less and was surprised to see a large number of cars on the road. Things got worse close to Garh Mukteshwar where there was a huge traffic jam. It appears we were travelling on the wrong day as every one seems to have gathered at the banks of the Ganges for a holy dip. I guess this put us back by an hour.

Since we had left early , by 8 am our stomachs were growling and we were eager to stop for breakfast. We made a stop at McDonalds in Gajraula. They offer good breakfast of pancakes and coffee.There is also a Bikanerwala close by and if you prefer to have an Indian breaky, you can also consider stopping here. 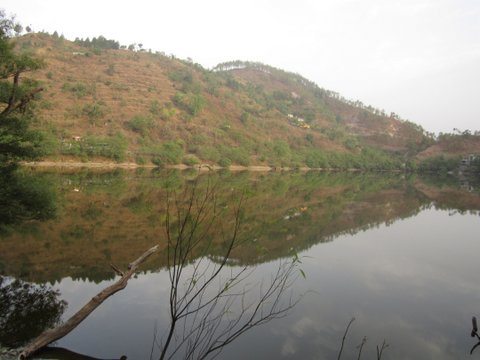 Stomachs full we hit the road again. There were a number of tolls on the road between Dehi-Hapur-Gajraula-Rudrapur-Haldwani-Kathgodam. We spent around Rs 85. Some stretches of the road are excellent with double lanes and dividers between the two way traffic. However, there were areas where one side of the road was not being used with both the up and down   traffic being moved to one side of the road. This can make driving a nightmare as rules are rarely followed by drivers. We have lived in Europe and are very used to roads trips, but the total lack of road safety can make driving a bit stressful in India. 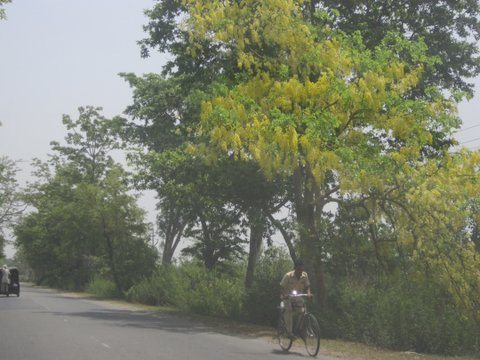 NH-87 On the way to Kathgodam

Finally reached Kathgodam at around 11.30. Before moving up to the mountains we wanted to tank up the petrol and was in for a rude shock. Either the pumps did not have petrol (they had run out of petrol) or they were queues that were so long that it would take more than an hour of waiting . The only advice here is that you should fill you petrol at Haldwani or earlier, especially if you are making the trip during the tourist season. The next petrol pump in the hills is on the Bhimtal-Bhowali road and be prepared for long queues here too. Since we had around half tank full, we decided to move on, but not before wasting another 45 mins.

Naukuchiatal is 26 kms from Kathgodam. The trip takes around an hour.The road is not particularly good especially at some stretches. You know that you have arrived closer to your destination when you reach Bhimtal, which is just 4 kms away from Naukuchiatal. The drive along the lake in Bhimtal is beautiful. Then you begin the climb for Naukuchiata. The road has dwellings on both sides for most parts of the 4km stretch and takes barely 10 minutes. 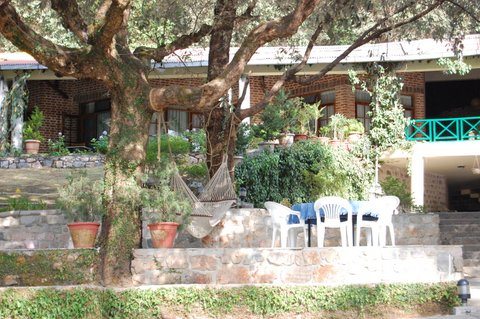 So we were at the Lake Resort at Naukuchiatal by 2pm. The Lake Resort is an island of serenity and it was wonderful to be here after the heat and dust of the plains. We were allotted a room in the Main block ( the resort has three blocks-the main block, middle block and the hunters lodge) which had a clear view of the lake. I would recommend the this block for those who want to be near the cafe and the main centre of activity. However, if you want some privacy , opt for the middle block, which also overlooks the lake but is quieter. The resort has its private access to the lake and its own paddle boats which you can hire for an hour for Rs 300. Each boat easily accomodates 4-5 persons. Take a boat ride in the early morning or in the late evening  and enjoy the calmness of the still waters. 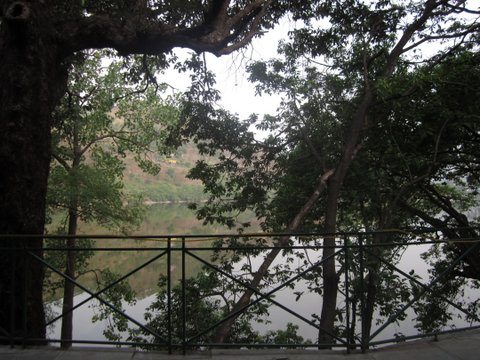 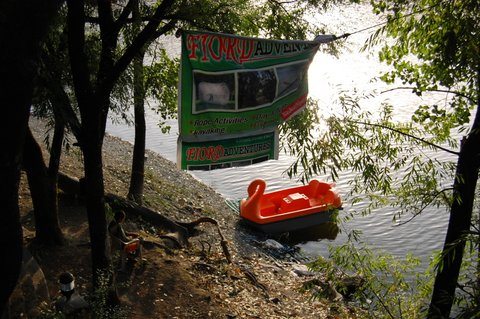 One of the paddle boats at the Lake Resort

We  explored the property the first day and was happy to see that apart from a TT table and carrom board, the resort has a gym and two pool tables. My husband and son  played a few games of TT and carrom, while i enjoyed the hammock in the garden with my book.  Then as the sun set, it was mystical seeing the colour of the waters change. The next morning we decided to take a boat ride. Then, following a good breakfast we decided to take a walk around the lake and explore the small hamlet. The walk is around 3.5 km and will take barely an hour at a slow pace. You will meet smiling locals and few tourists, especially if you take this walk before 10am. The tourists generally don’t stay at Naukuchiatal but make a day trip and descend on the sleepy hamlet after 11 and move out by 5. 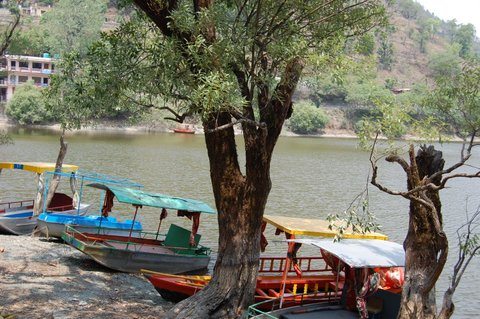 Boats anchored along the lake in Naukuchiatal

Bhimtal , as I mentioned earlier is just 4kms from  Naukuchiatal. You can also consider walking there and visiting the only temple where Bhim is worshipped. On the Bhimtal- Bhowali road is the Folk Culture Museum run by an archeologist and painter , Dr.Yashodhar Mathpal. nd now a painter (don’t try to walk here as its slightly away from Bhimtal). Very few people stop by here, but I would recommend that you make a visit there. Though slightly run down, its one man’s effort to capture the culture and history of the Kumaon hills and your visit would not only support this effort but also give you the opportunity to meet the man himself, who personally takes you around the museum. He has some very beautiful paintings which you can also purchase apart from reprints in the form of greeting cards.

Since the temperatures in either Bhimtal and Naukuchiatal were just pleasant, we decided to get closer to the mountains and therefore planned a day trip to Mukhteshwar, which is around 46 Kms away. Started at 8 in the morning and moved towards Bhowali. On reaching Bhowali we took the turn towards Mukhteshwar. The road is much better than the one which we had taken from Kathgodam to Naukuchiatal, though much steeper. 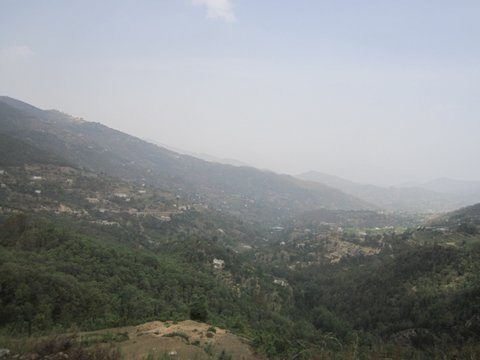 Passing by Ramgarh, on way to Mukhteshwar 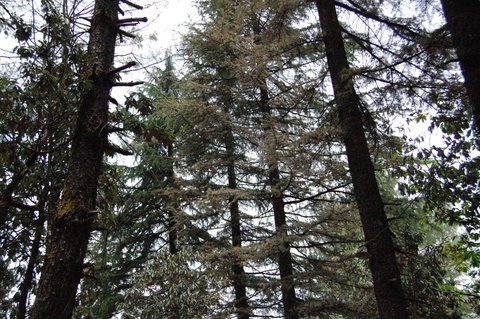 The views are marvellous especially as you move towards Ramgarh. You pass though orchards with fruit sellers selling their wares along the roads. As you climb higher, the crispness of the mountain air hits you, something I was missing at Naukuchiatal. We reached Mukhteshwar in two hours, which included a short break to eat soft alu parathas packed by the wonderful kitchen staff at the Lake resort. 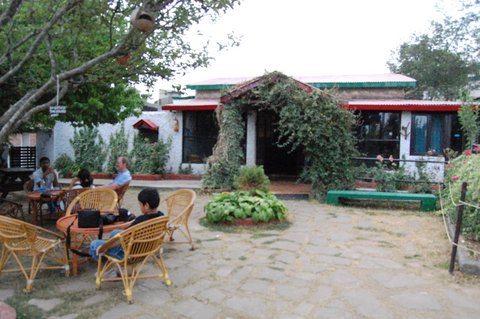 At Mukteshwar we first stopped at the Mountain Trail camp which is 5 kms before the centre of Mukhteshwar . Its located right on the road and you cant miss it. There is also a chocolate shop adjacent to the camp and you can purchase some really good chocolates from here. The shop also sells small gift items that are worth looking at.After a hot cup of coffee under an apricot tree and placing an order for lunch, we moved towards the PWD guest house from where we were told that the view of the himalayas is spectacular. However, we werent lucky with the view as it was misty thereby lowering the visibility. However, we could imagine what a spectacle it would be on a clear day. The location of the guest house, no doubt is excellent. The property is where Jim Corbett stayed when he visited Mukhteshwar and fell in love with the place. I can very well understand why he did so. however, I wish the building was better maintained. 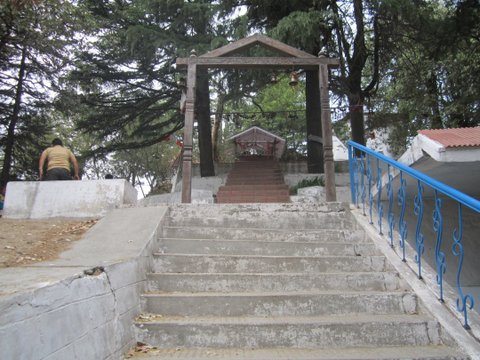 The steps leading to the Temple in Mukhteshwar

Next was a stroll in the woods close to the guest house. You can hear the whispering pines and the chirping of the birds and breathe in the fresh mountain air. This was followed by a stop at the Mukhteshwar Temple nearby. You walk up 97 steps to reach the temple and apart from the being blessed by the gods, you also get a fantastic view of the surronding hills. 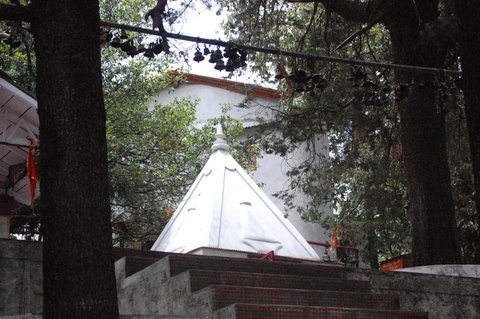 On our way back to the Mountain Trail camp, I made a impromptu stop at a small outlet with the sign ‘Kilmoura’.I did not regret at all. It sold organic produces grown in the hills, beautiful  hand woven scarfs , shawls and stitched garments. After splurging some money we had lunch and then started our journey back to the Lake resort. On the way also stopped at Fruitage, near Bhowali, which sells Products like jams, juices etc.

After another quiet day at Naukuchiatal which was spent reading, playing pool and fishing (the resort arranges for a permit), we returned to Delhi and the madness of city life.

Road trip to Naukuchiatal and Mukteshwar was last modified: December 23rd, 2020 by crispair

The World is a book, and those who do not travel read only a page.

This time around we decided to travel to Kashmir, the most “in news” state of our country, for all the very wrong reasons though! The Gurupurb holiday clubbed with a weekend gave us the three days to plan our trip. We left for Kashmir, fraught with all the apprehensions in the world, and yet excited. On arrival at the airport we were warmly greeted by Dr. M.H Wani, an academician, working towards nation building in his own humble ways; however we didn’t know how our myopic views about this breathtaking place were to be altered by the end of this trip!